It’s the old question every mom wants to tackle and is too exhausted to think about, how to make healthy kid snacks. Today we’ve got 5 snacks kids can make that aren’t junk food! 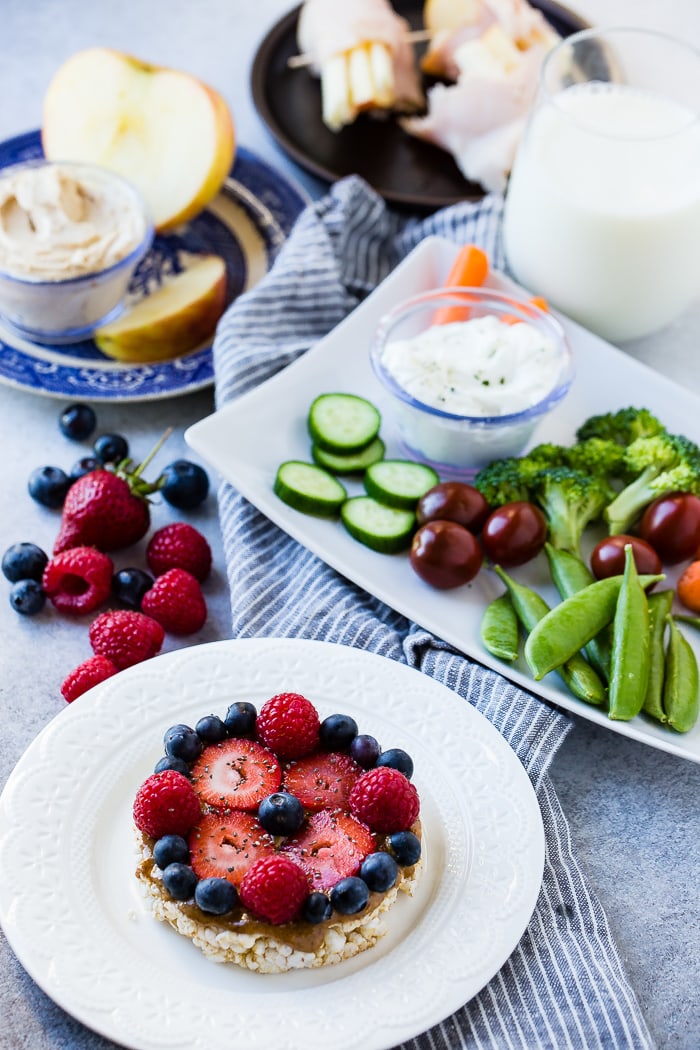 5 snacks kids can make that aren’t junk food isn’t just about good ideas you can pin on pinterest, there’s a scary nutritional reality our kids are facing and we thought that as we learn about it we’d have a conversation with our readers too.

You know Cade and I, we don’t stress about the little stuff. We just do our best with raising our family and encourage others to as well. And then we got faced with the reality that two of our kiddos were deficient in nutrients, and enough so that we had to make changes to help them out. I used to roll my eyes thinking that parents were being dramatic until it was me.

What Nutrients do Kids Fall Short on?

Alright, I’m going to try to not be wordy, but the reality is, one out of two kids, ages 9 and up fall short on essential nutrients they need to grow strong. More than half don’t get enough Calcium, Vitamin D and Potassium. In fact, MOST kids under nine are falling short on the latter two.

That’s just crazy. I mean, it’s 2018, so when we found out it wasn’t just our kids (and hello, we are food bloggers so you’d think they’d be doing just fine in a house revolving around food!), but the general population, we started having some serious conversations. 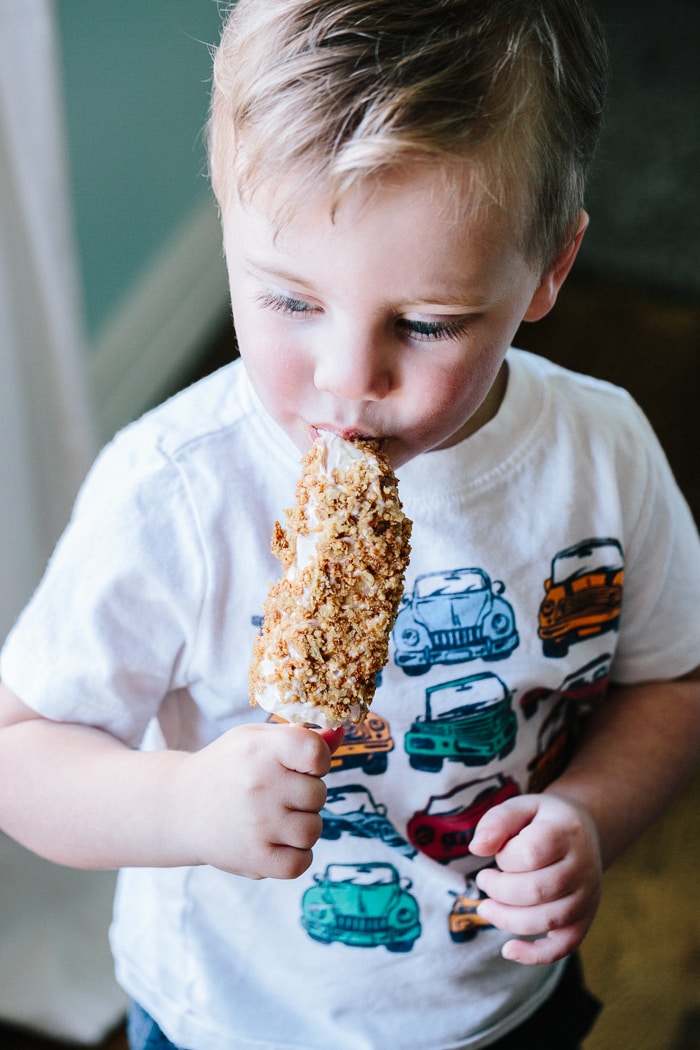 How to Know if Your Kids are Not Getting Enough Nutrients

Here’s how to know if your kids aren’t getting enough nutrients. It’s all stuff we’ve been through, so take note.

Are your kids slugish after school and not wanting to go out and play with friends? What about not finishing games and crying more often? Life, especially school life is draining but it shouldn’t be holding them back from enjoying being outside or with friends.

2. Growing has slowed or stopped

Our kids all have low growth, in fact most aren’t on the chart but follow their own little curve. Until that curve isn’t really moving anymore either.

Milk has a ton of nutrients that are important for growth apparently. Should have listened better to those commercials growing up. And yes, I’m now singing those old jingles in my head.

Ha, apparently our moody 7 year old this week needs to eat better which isn’t surprising at all. Irritability, and attention issues could mean that while they are eating, they aren’t getting enough NUTRIENTS. There’s a difference between eating and eating to take care of yourself.

Think about it, how many of your kids come home and eat your entire pantry only to claim 30 minutes later they are “starving”. Their body is trying to tell them it needs something specific but with an abundance of food our population has stopped listening. Now they are tired, grouchy and whining and I really don’t love whining. 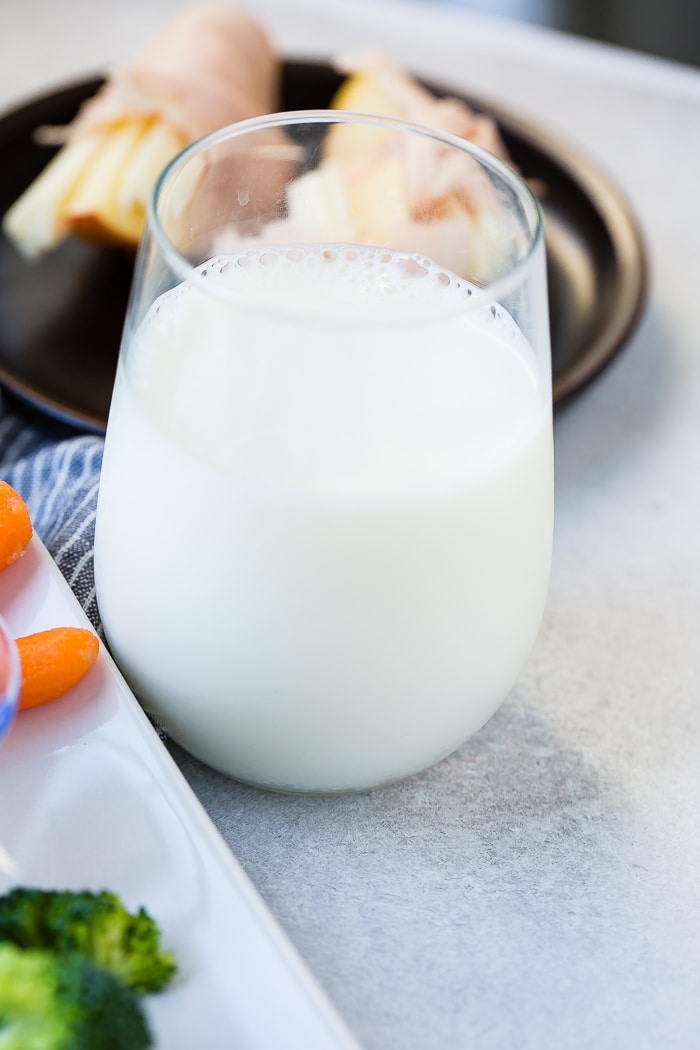 What is a Top Food Source For Nutrients to Help Kids Grow?

Or a whole heck of a lot of sardines, no joke. I’m literally gagging as I type that.

When we found out we needed to be more mindful and make some changes in our diets I was feeling so frustrated, what crazy meal plan are we going to have to adopt?!

The answer was milk.

Something I thought we did just fine with, but was also such a relief to hear that the top food source for calcium vitamin D and Potassium (along with protein and other extras, so hello, total win since our kiddos struggle with getting enough of those because they are so picky, at least the youngest is) was milk, I totally felt like we could do this.

We’ve done some research and 3 out of 4 kids fall short on the recommended amount of milk. We have 3 kids so, yeah, we needed to up our game.

How Much Milk Should Kids Drink?

Kids love milk, this is such an easy way to help our kids grow strong without forcing kale down their throats. Although, I do love a good kale salad or smoothie… 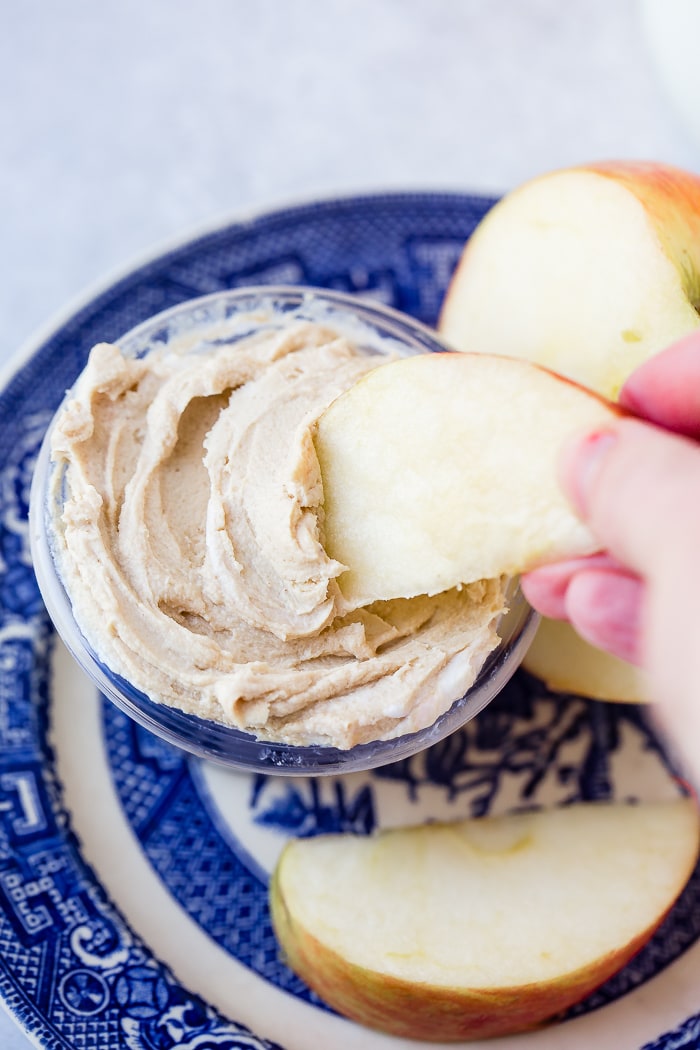 How to Get More Milk into Your Child’s Diet

We did a really fun Facebook Live with Dr Tanya Altmann  and she had a really great idea about serving milk at meals and water in between.

Here’s the issue though, as soon as I was sending kids off to school the next day I realized that milk at lunch wouldn’t work since they packed lunch in.

Our new rule is milk at breakfast, dinner and afternoon snack. Then of course we add dairy wherever else we can, but milk is the most important, so products like yogurt or cheese are great on the line up for hitting nutrients, but it’s just a bonus, and not in place of milk. 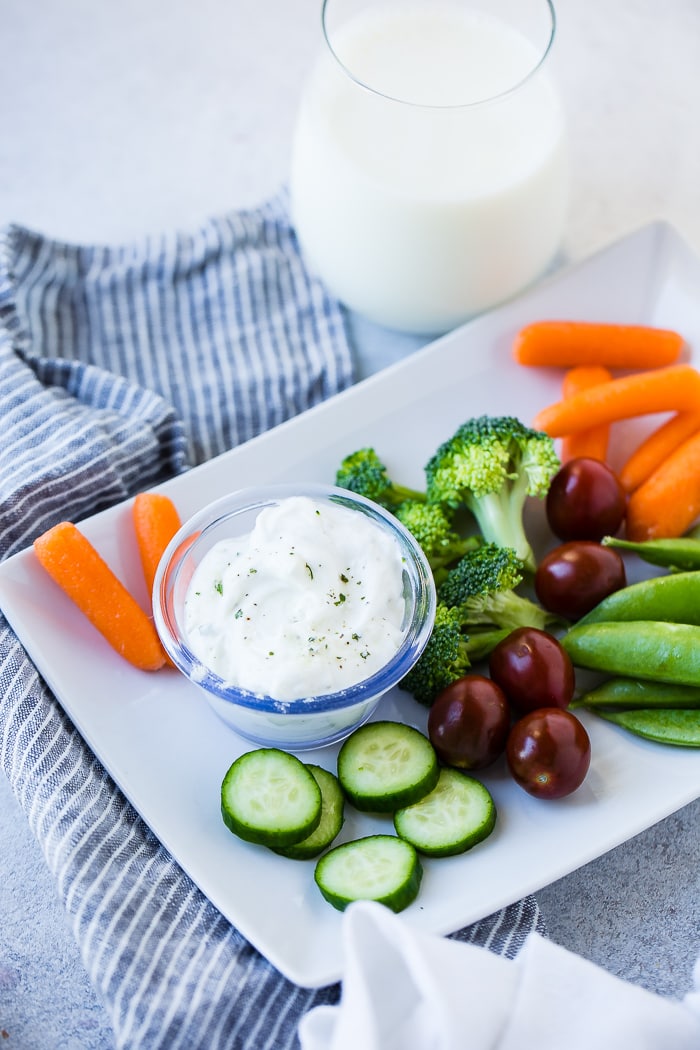 OK!! So let’s do something about it!! Our kids were driving me batty with the after school and all summer long munchies, so last year when we started to learn about nutrient deficiency we decided to tackle snack time to make sure we got in that extra serving of milk.

What are good kid snacks? These are 5 snacks kids can make that aren’t junk food, and in fact, should make!

When you get your kids to the grocery store with a plan that they get to be creative EVERY. SINGLE. DAY. and make a fun snack then they are more willing to try new things. Don’t give up if it’s slow to go. It can take 20 times of trying something to like it. (Apparently I have 19 more tries to like sushi, poor Cade.) 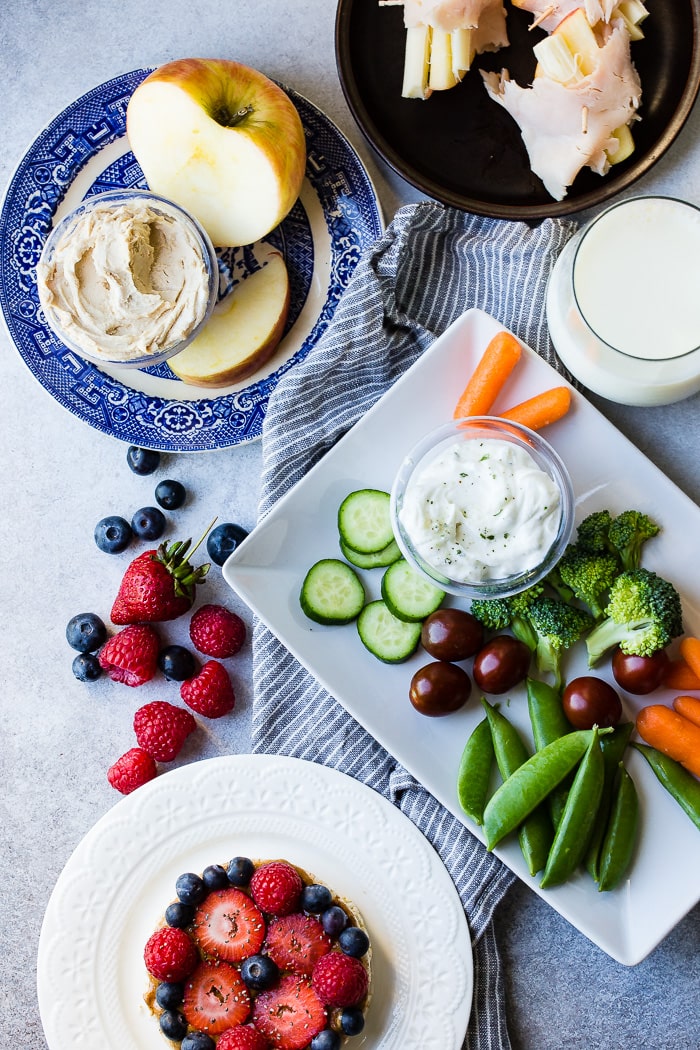 After School Snacks for Kids

After you get the food home, tell the kids that every day they have certain, designated snacks in the pantry and fridge and that’s it for snack time. Place them in specific containers or areas to keep it clear of what they can have.

Now explain that just like the show, Chopped every day they can mix and match those ingredients to make whatever they want, but there has to be a glass of milk with it.

Here are just 5 ideas of what our kids have made. We would LOVE to hear your ideas, so leave comments below, tag us on instagram #ohsweetbasil @ohsweetbasil or drop a photo in our VIP Oh Sweet Basil Facebook Group. 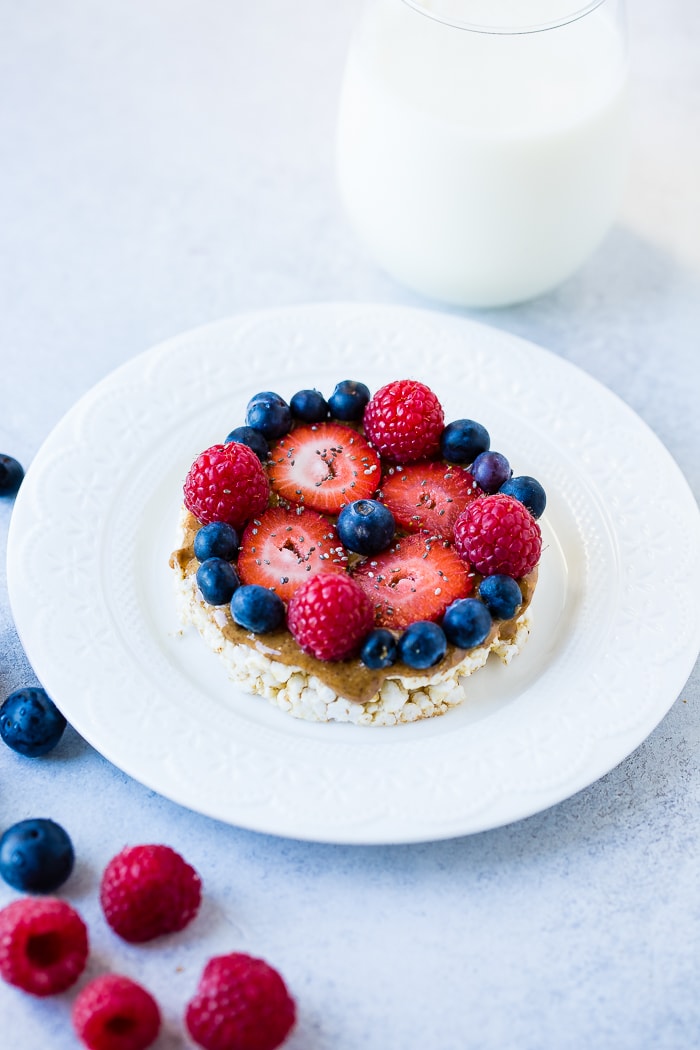 You actually don’t even have to do rice cake fruit pizzas, you could totally knock out regular pizzas with just cheese or a veggie version. Use our Homemade Quick and Easy Pizza Sauce, a more nutritious crust option and let them build their own. Not only does it teach great cooking skills but mama doesn’t have to work more.

We buy brown rice cakes as I build open faced “sandwiches” on those for lunch throughout the week, but you could also buy tortillas, pitas, etc. 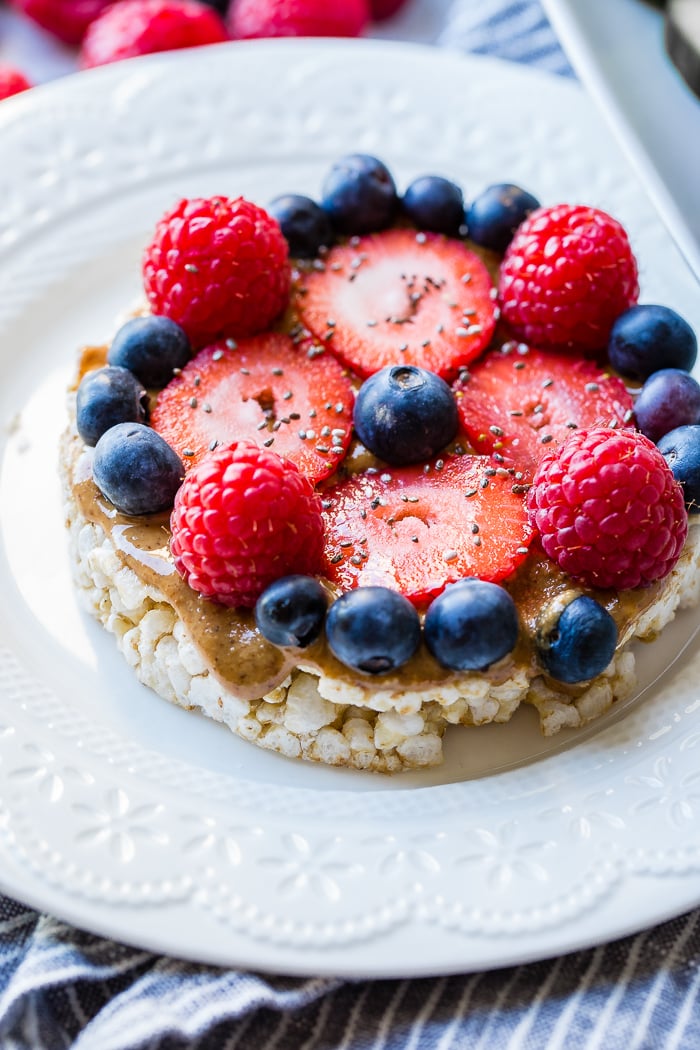 Pile on your favorite nut butter, fruit and we give them chia seeds as sprinkles. They don’t taste like anything and our 7 year old is all about making things pretty.

Plus, it’s a gluten free snack for  kids! 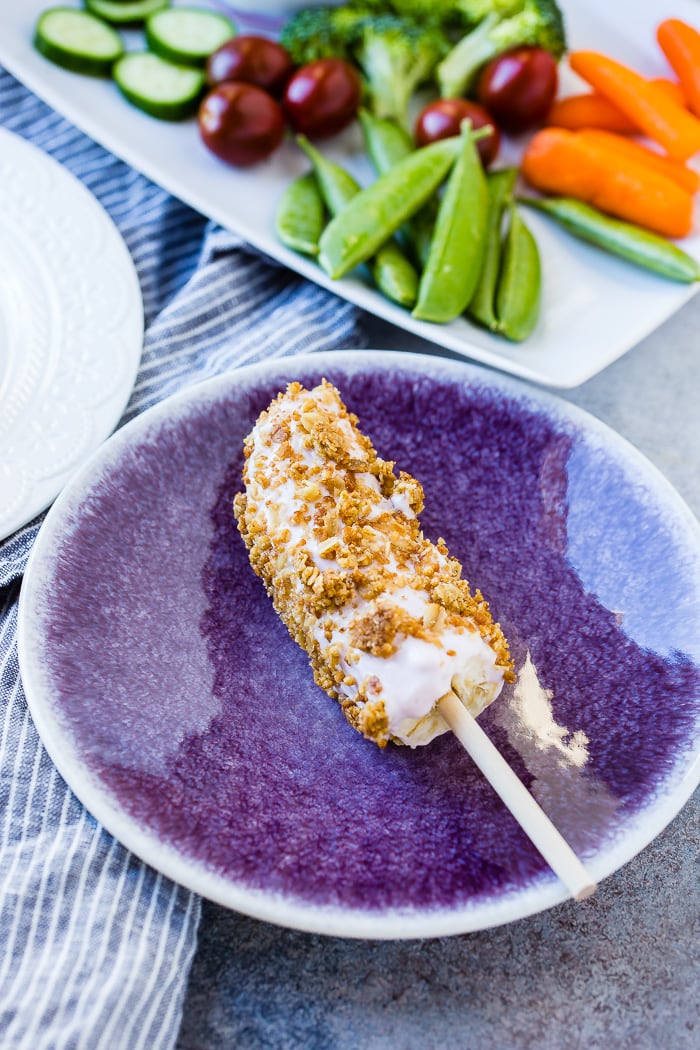 This is an old favorite that I’ll totally admit I’m a sucker for. In fact, I’m literally eating one, haha. Frozen yogurt and granola banana pops are so good!!!

Have your kids peel and half bananas, stick a stick in them, roll in a favorite Greek yogurt and then granola, coconut, or even chocolate chips if you feel like being extra nice.

Pop everything on a silpat lined baking sheet and freeze for 2 hours. Store in large freezer bags and you’ve got yourself a better for you snack! 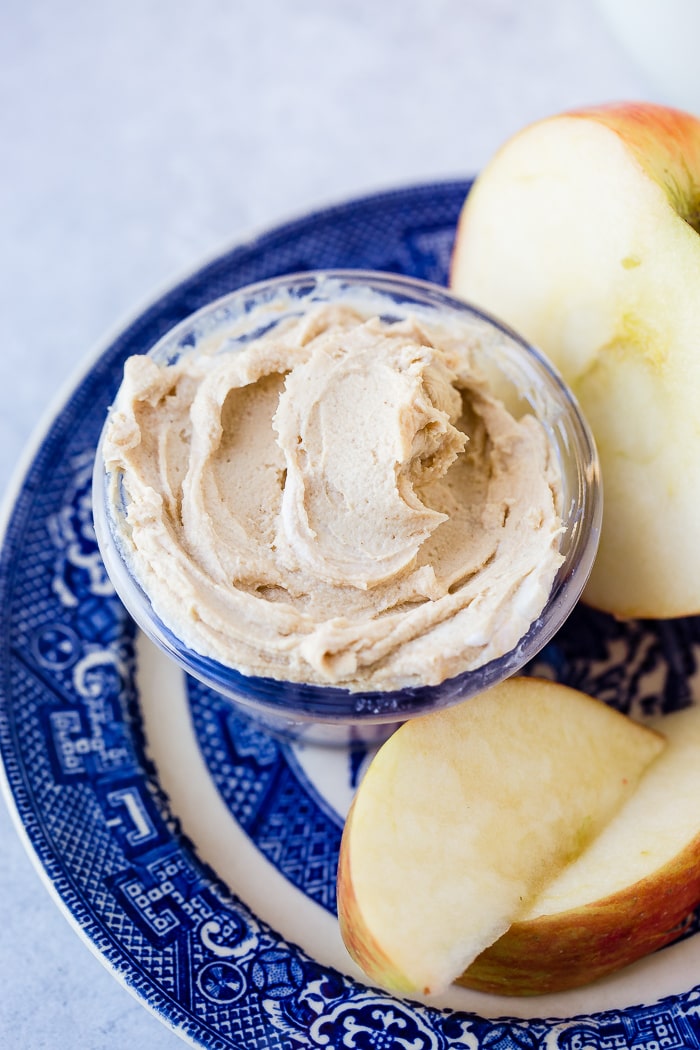 This peanut butter yogurt apple dip is one of our favorites. You can use any nut butter you’d like and sticking to plain greek yogurt means it literally just tastes like peanut butter and apples but without the extra sugar and calories. 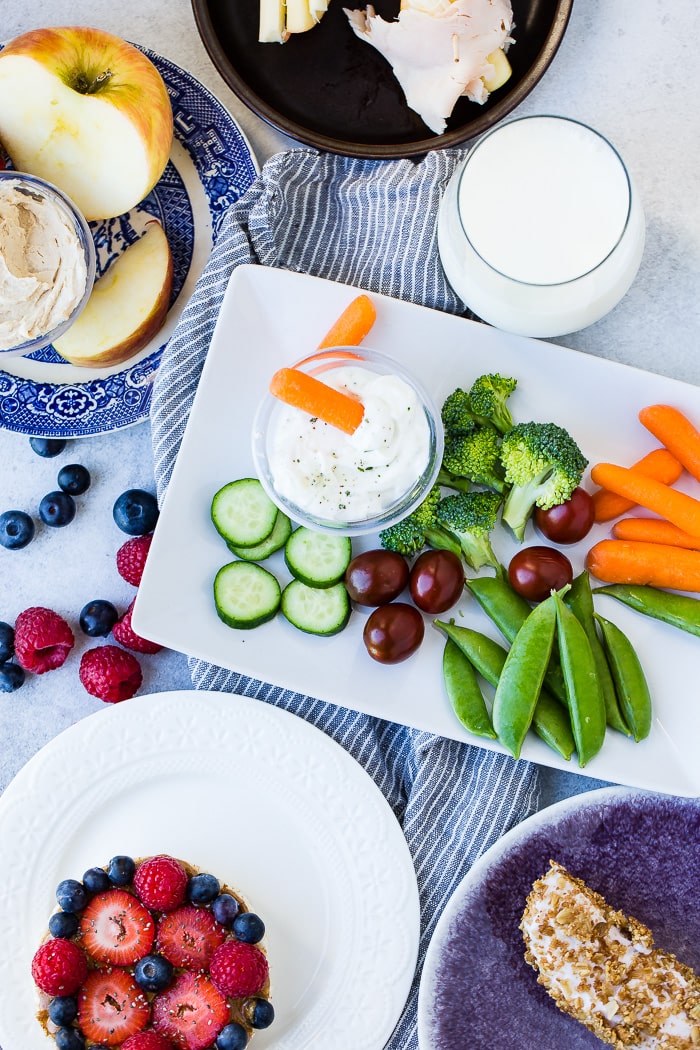 On our Facebook live event, someone mentioned that they stir a little ranch seasoning into plain Greek yogurt for veggie dipping and I immediately tried it. Our 12 year old is officially obsessed. She makes a bunch in little containers and eats one at school or after school. 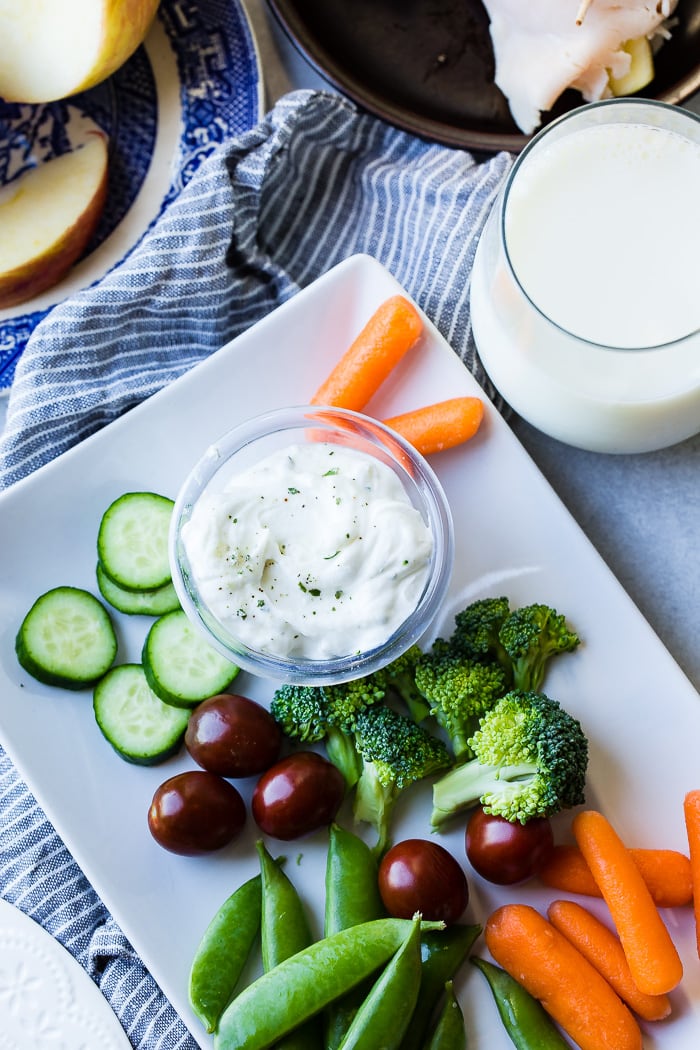 Oh I’m sorry, you don’t name your food like we do? Haha, I loved that Dr Altmann mentioned that if you call something, “Grandma’s casserole” or turkey apple cheese boats, it suddenly becomes more desirable. When our daughter was fussing about only having turkey, apples and cheese (come on, we can’t all be on top of grocery shopping all the time!) I had that memory pop into my head and we quickly built boats using toothpicks. Worked like a charm.

Here’s the thing though, it can’t just be about the snacks, the glass of milk with it is your real goal. You’re just being a darn smart parent by filling their little bellies up the right way so you don’t lose your mind with “I’m hungry comments” and it’s helping to make them thirsty so they get in that glass of milk. 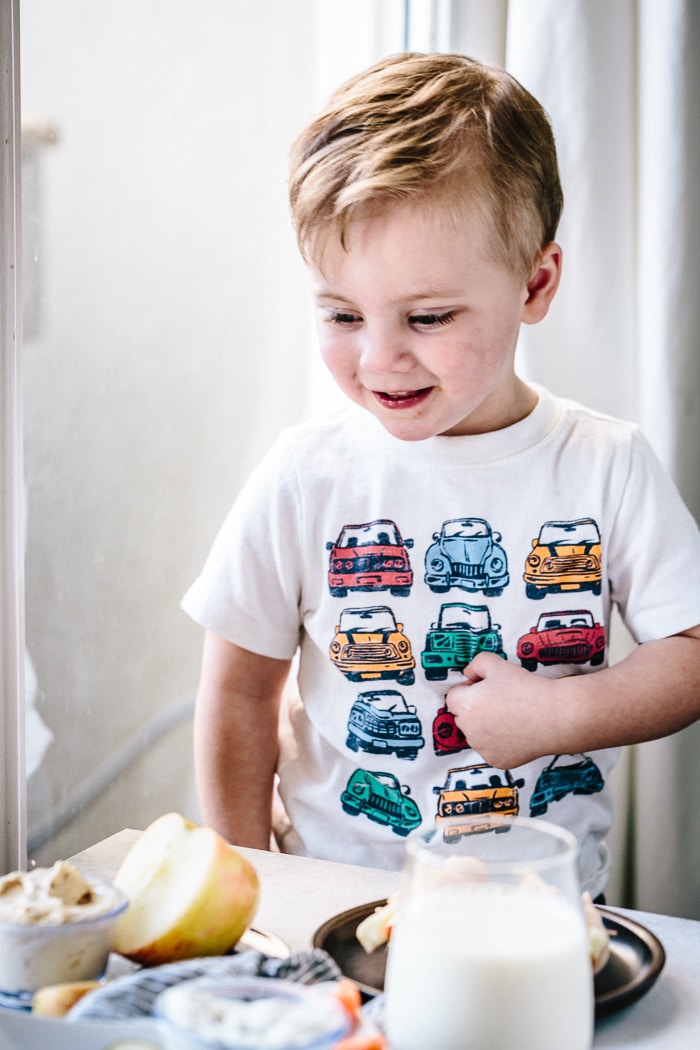 It’s so silly that in this day and age where we can literally look into space and have food so conveniently available that our kids are nutrient deficient as if we are living through a crisis. Today my crisis was giving a 2 year old a sliced banana instead of a whole banana, nutrition that could come from one source shouldn’t be something I’m tackling.

And do I feel bad that we were?

We are doing the best we can as parents and we you learn a little something, I mean it’s not like there’s a handbook for heaven’s sake, then we implement it in a non-stress way and we are totally #winning at this thing called, Life.