Inspired by the kids’ TV show iCarly, these Baked Spaghetti Tacos are so easy to make and kids (and adults!) go crazy for them! 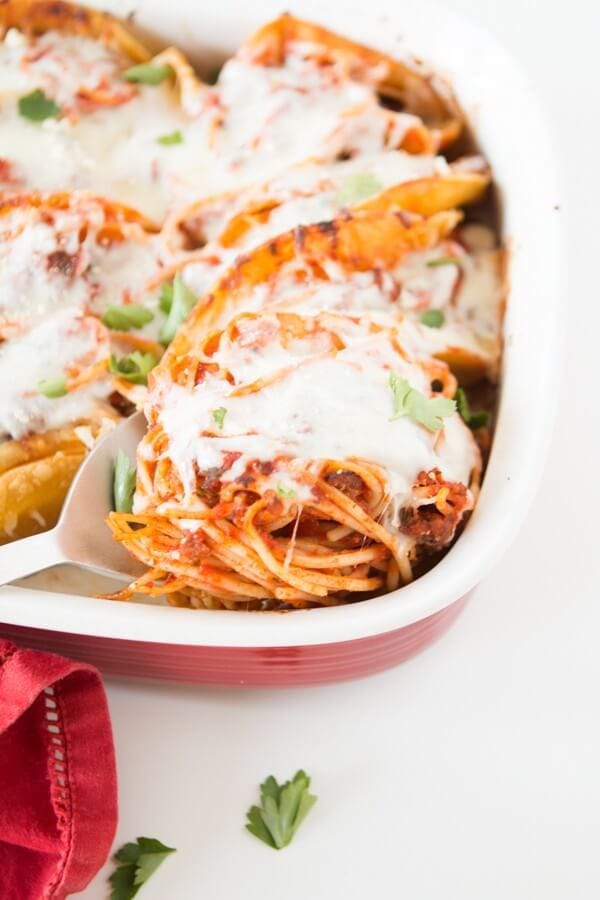 I’ll hang my head in shame for this one because it’s sooooo based off of a kid show, iCarly. I know, I know!! Did you know that our little guy is not the first time I’ve struggled with Hyperemesis? In fact, our second child it was even worse if you can believe that.

The times that I was at home and not in the hospital I would lay in bed or on the couch and our oldest would watch iCarly while I threw my guts up. I felt horribly guilty and cried a lot over the fact that I was not being there for her. She didn’t mind, she thought is was hilarious that Carly and her brother would make spaghetti tacos so years later I felt inspired to make baked spaghetti tacos and let her know how much her patience through two pregnancies has meant to us. 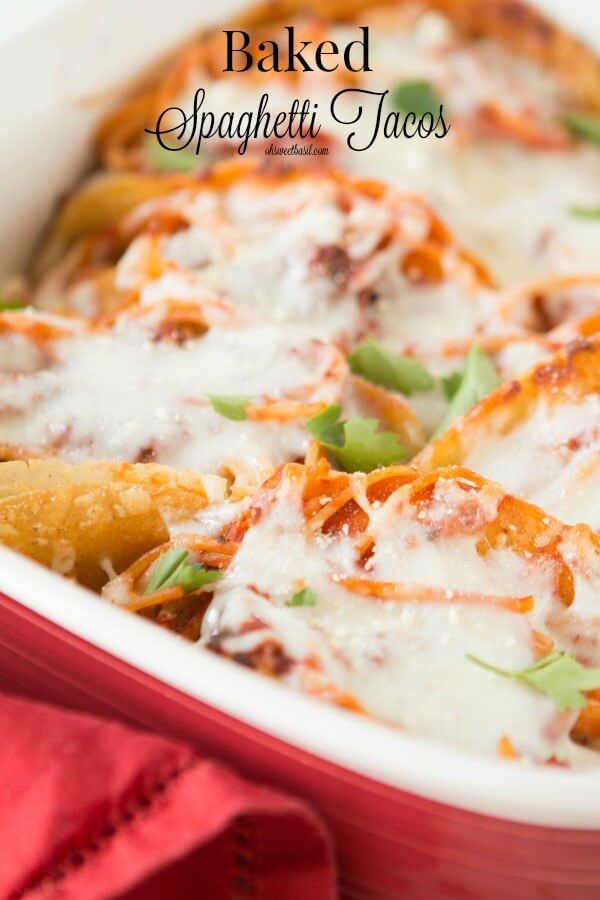 These oven baked tacos are so simple to make despite being all homemade! Here’s what you’ll need to make copycat iCarly spaghetti tacos: 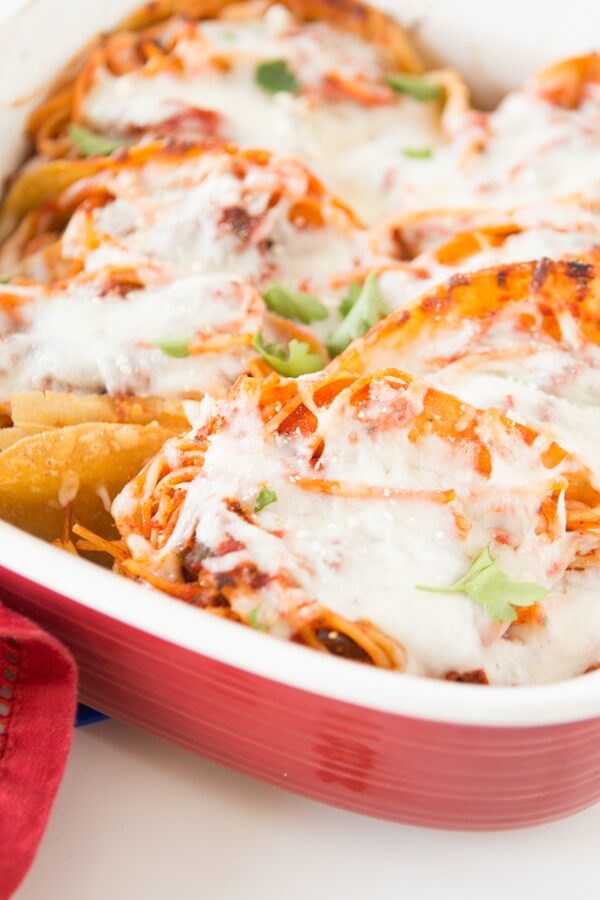 How to Make Spaghetti Tacos

Start out by frying up some corn tortillas. You’ll want canola oil in a pan, cook the tortilla a few second on each side and then, using tongs pinch each side together to form a taco shell. Cook until browned and crunchy on one side, flip and to the same on the other. Finally hold the shell on its bottom for a few seconds to crisp it up and help it hold its shape. Place on a napkin lined plate and sprinkle with a little salt. Repeat until you’ve got all of your tacos made.

Now, cook up your sauce with or without a little ground beef or sausage, or we prefer a combination. If you haven’t noticed, I’m all about making this your own meal so you choose: marinara, spaghetti sauce, vegetarian or meat eaters, sweet or spicy, it really doesn’t matter at all.

Now you just load up those fresh fried tortillas with your saucy spaghetti, add a little extra sauce on top to help everything stay moist and top with cheese (mozzarella was our choice but you can do anything). After baking the tortillas, they  end up golden and crunchy on the ends and the insides are flavored with the sauce which is wonderful. Sprinkle with a little parmesan cheese and parsley and dig in! 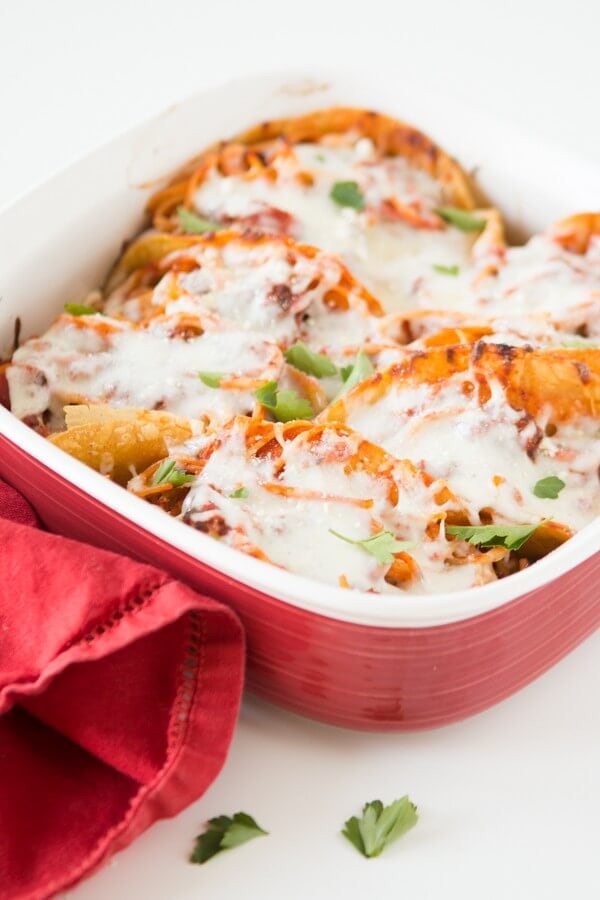 Can I Make Spaghetti Tacos Vegetarian?

Of course! You’re welcome to use any spaghetti sauce you’d like. You can easily make baked spaghetti tacos with a meaty bolognese or a vegetarian marinara sauce.

Can I Meal Prep Spaghetti Tacos?

No, these baked spaghetti tacos are best the day they’re made since the taco shells become soft over time. However, you can make the spaghetti sauce beforehand and even toss it with the cooked pasta up to a day in advance. Then, all you have to do for dinner the next night is make the taco shells, stuff them, and bake!

The key to spaghetti tacos is to make everything yourself. It’s such a simple dish that if you go with all store-bought it ends up a little bland and lacking in real flavor and texture. However, if you must buy something let it be a good quality spaghetti sauce and then doctor it up with some fresh garlic, herbs and even throw in a little parmesan cheese to really give it oomph.

Also note that spaghetti or a slightly thicker, long pasta is best for this kid-friendly dinner idea. If you use angel hair pasta or something similar, the noodles won’t hold up to the sauce and your spaghetti tacos will be a total mess.

This is a very flexible recipe, so feel free to switch up the ingredients to suit what you have on hand. You can use another type of pasta, a different sauce, various cheeses, and so forth. 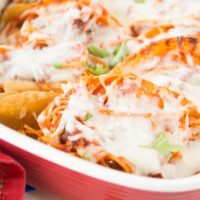 5 from 1 vote
Prep Time: 10 minutes
Cook Time: 30 minutes
Total Time: 40 minutes
Servings: 4 -6
Save Recipe Print Recipe
Inspired by the kids' TV show iCarly, these Baked Spaghetti Tacos are so easy to make and kids (and adults!) go crazy for them!