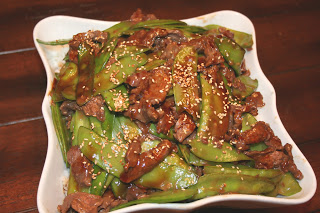 This Beef And Snow Peas recipe comes from The Pioneer Woman, and I do love her recipes. The picture on her blog for sure looks better. Don’t you all wish you were her? Just a little? Maybe not want to actually BE her, but have her success. I do. *Sigh*

Anyway, I’m still not sure how I really feel about this meal. It was good, it was a nice change from chicken, snow peas are yummy, buy it was just not all there for me. Now, I  really did enjoy this. It was a yummy sauce, the beef was thin and tender, the snow peas were crisp, so it really was a great meal. I would totally make it again, but with a few changes.

I thought it need more sauce, a little more flavor to the sauce (maybe not skip the red pepper?) and I’d love a few more veggies. In fact, I’d love to throw in some red pepper and carrots. To me that would be perfect. I did add toasted sesame seeds in place of the green onion. We are more toasted sesame people.

So, pretty much I say make it. Double or even triple the sauce, don’t leave out the red pepper and throw in a few extra veggies. Let me know how it goes.

Recipe by The Pioneer Woman

Are Snow Peas And Sugar Snap Peas The Same?

Snow peas are flatter and much less sweet than a sugar snap pea.

Are Snow Peas A Healthy Vegetable?

Snow peas are quite nutritious and contain a fair amount of fiber and antioxidants.

Is There Another Name For Flank Steak?

Flank steak is a long, flat cut of beef that is considered to be one of the cheapest and toughest cuts but has lots of flavour.

It’s best suited to braising and will benefit from marinating, and is usually cut into thin slices for fajitas, stir-fries, or even an at-home Philly cheesesteak. 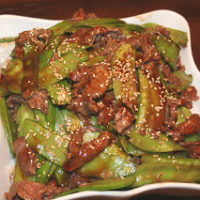 Recipe by The Pioneer Woman