I love meals that are as easy as if you didn’t cook at all! This Asian beef with snow peas and edamame is delicious and super quick! 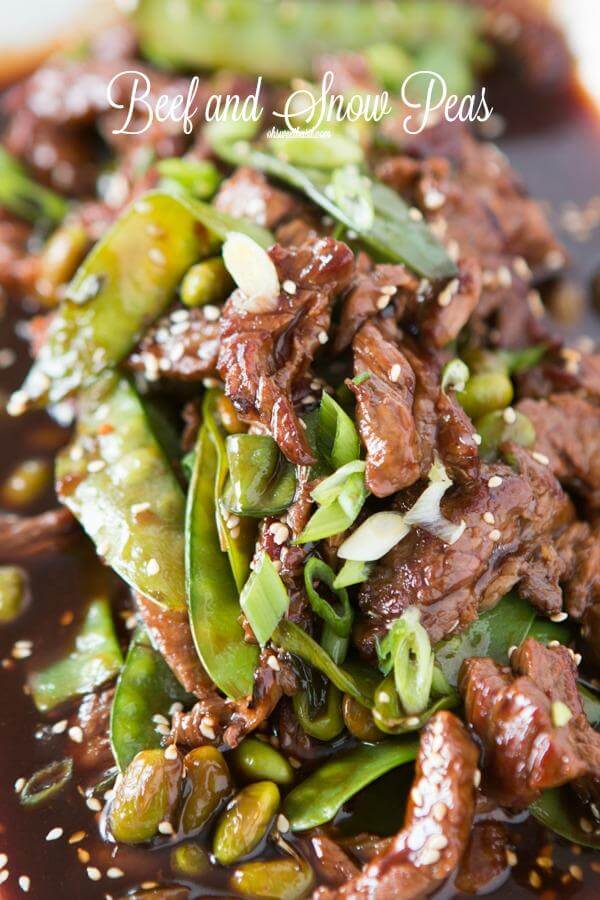 A long, long time ago I realized that simple ingredients go much farther than long lists of ingredients, steps and directions. Beef with snow peas and edamame takes only about 15 minutes to cook, actually less if you’ve prepped everything and you can serve it alone, with rice noodles or rice. Nothing wrong with a little versatility. And Cade likes that we can both have it our way. 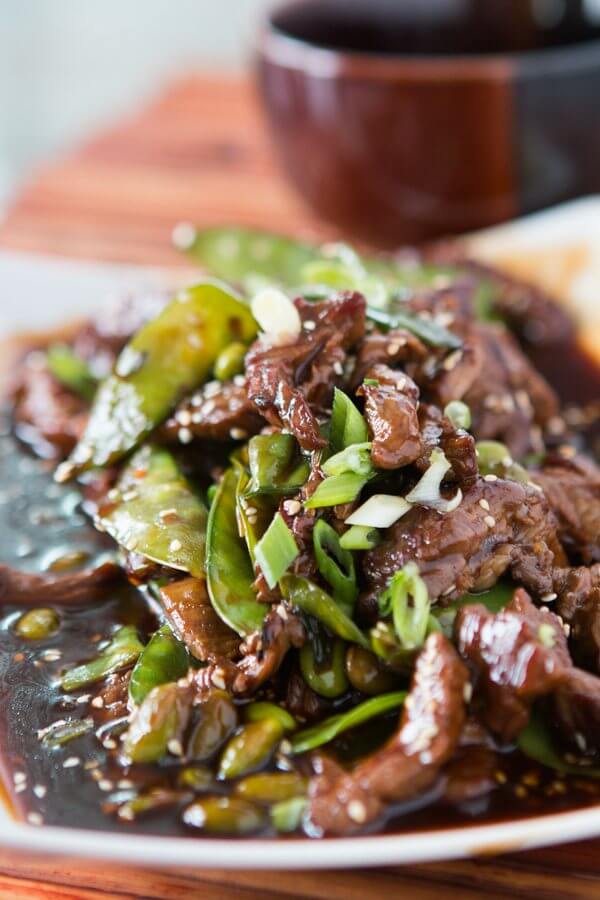 I don’t do spicy. You’ve probably noticed that on the site. There are very few recipes that offer a big kick and all of them were for Cade. Which is fine, he deserves to have things he likes as well. For this one I make the recipe and then I just put red pepper flakes (Cade uses chipotle) on the table as they just get added at the end anyway so he can sprinkle some on his dish. The girls squeal as he does so because they are convinced he is going to add too many and have a burning mouth. 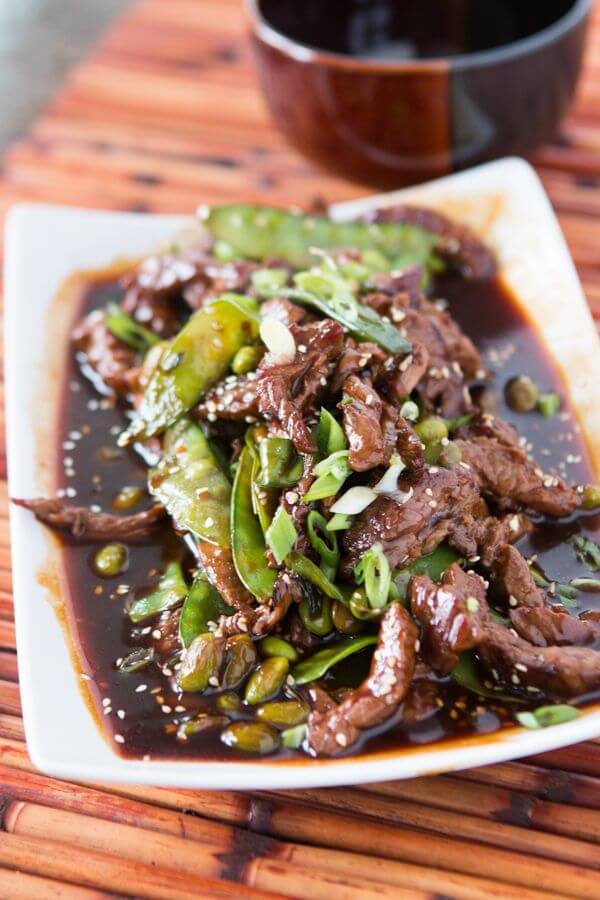 The key to this dish is slicing the beef correctly and cooking it at a high temperature for a short amount of time. You see, flank and skirt steak are really delicious but if sliced wrong or cooked too long they become quite chewy. The grains of meat run from end to end, and when you slice you’ll want to turn the meat so that you are cutting against the grain. In other words, don’t follow your knife along those lines, instead cut into them. And while it looks pretty to slice the meat thin on a bias it  actually makes it more chewy so thin strips is what you want.

How to Cook Asian Beef

Then there’s the cooking. High heat, a little oil and leave the meat alone until it starts to brown. Using your tongs flip the meat and cook only for another few seconds on the other side. Well done is a big no-no and trust me, even if in regular steak that’s what you prefer you wont want it with this one. It absolutely will make the meat too tough. 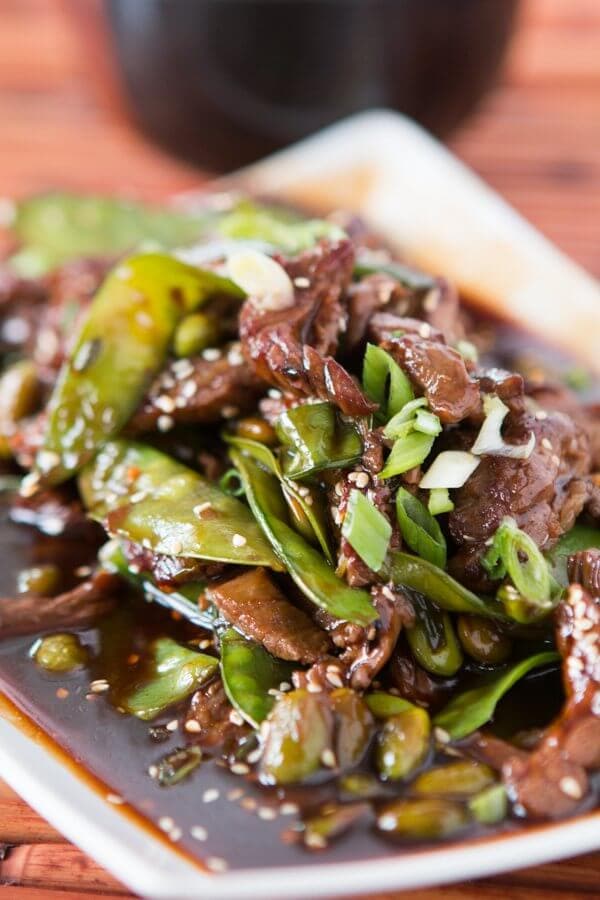 The sauce is really easy and if you need gluten free just use Tamari. We actually use Tamari more than soy sauce lately and we aren’t gluten intolerant. I have to mention the green onions as Cade isn’t the biggest fan. He doesn’t hate them, he just doesn’t care that much. But in something like this with that heavy beef and a brown sauce you need something to brighten the flavor that just regular veggies can’t do. You don’t want to skip them.

Are Snow Peas and Sugar Snap Peas the Same?

Sugar snap peas are a cross between Snow Peas and Garden Peas.

Snow peas are flatter and much less sweet than a sugar snap pea.

You can substitute sugar snap peas for snow peas in recipes.

Edamame is actually immature soy beans in the pod.

The pods are not meant to be eaten.

Edamame is a complete source of dietary protein. 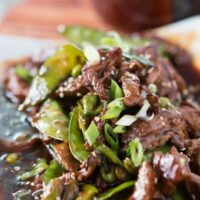 No ratings yet
Prep Time: 5 minutes
Cook Time: 10 minutes
Total Time: 15 minutes
Servings: 4 servings
Save Recipe Print Recipe
I love meals that are as easy as if you didn't cook at all! This Asian beef with snow peas and edamame is delicious and super quick! 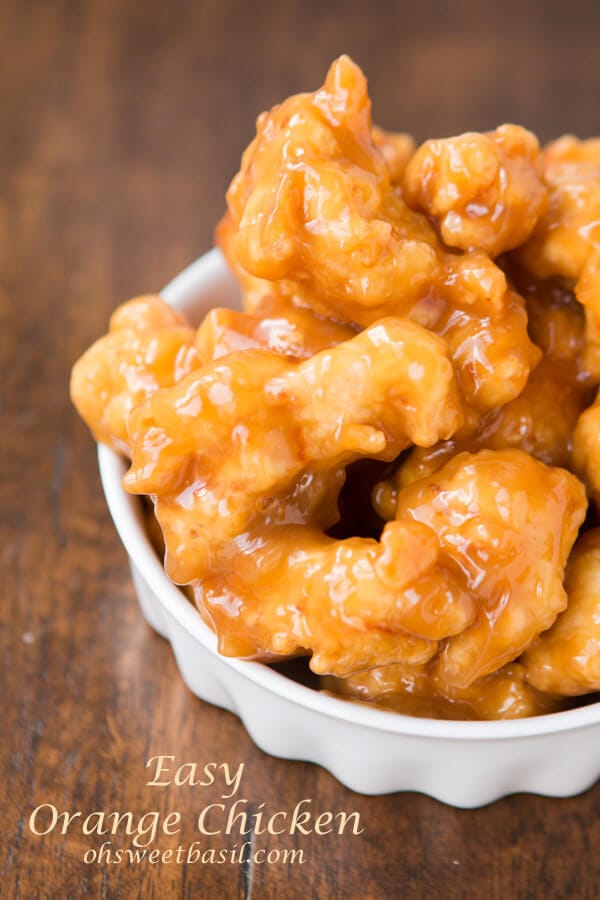 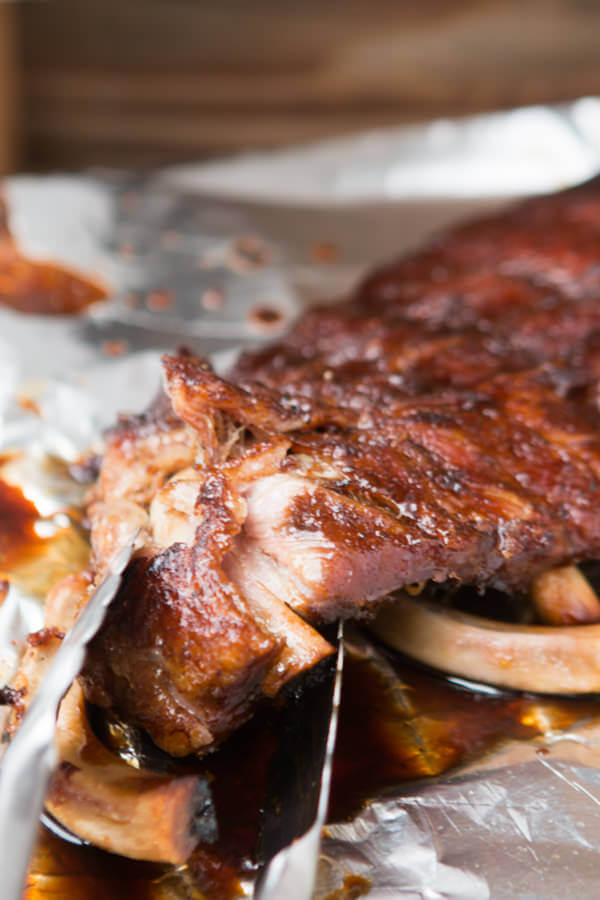 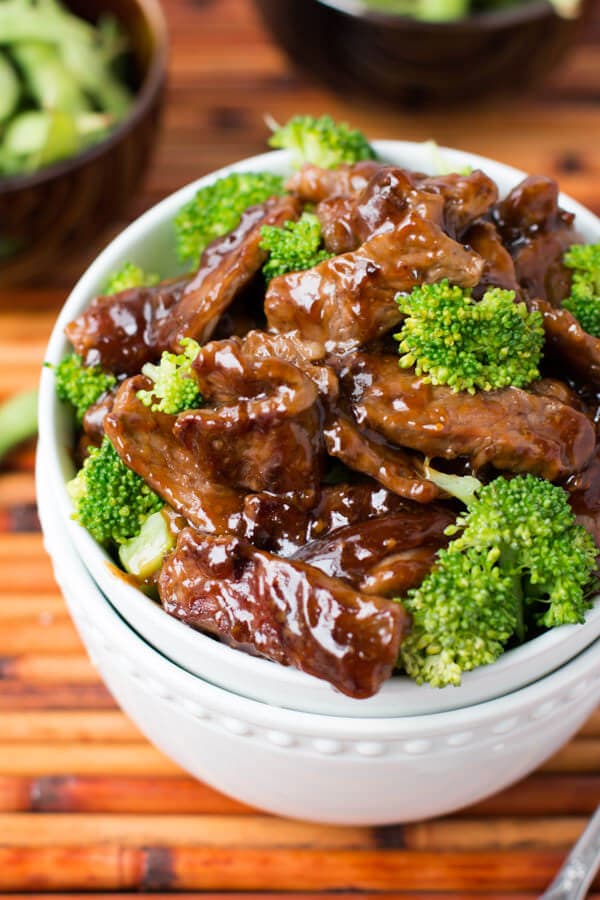