We decided to write a letter to you and while it’s quite public it seems to be the only way to reach you. First, we apologize. We’ve felt an incredible amount of anger today, and whether you or your employee chose to be dishonest or not we can still choose how we act. You must have felt pretty defensive knowing that we weren’t going to let this happen to us. For that, we apologize. 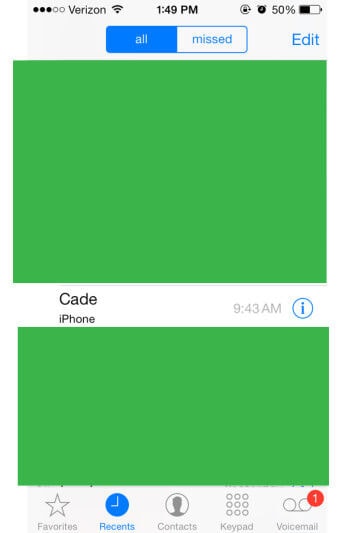 This morning I, Carrian called Cade at 9:43am to let him know I was about 10 minutes away from home and was wondering what time we should leave for the viewing for his dear friend that passed away. He told me that he was going to run and get the registration renewed on his car so that we could leave as soon as possible. Unfortunately he had forgotten it upstairs and so he would turn around and be there in about 10 so he would see me at the house. You can see the call above. 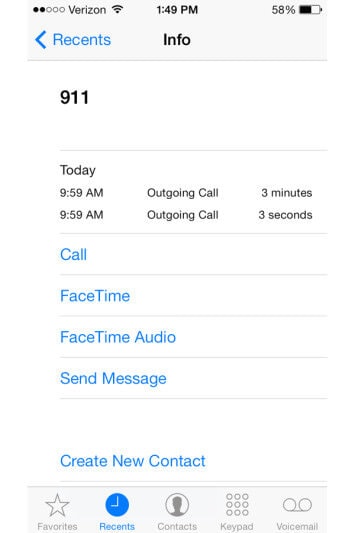 Sure enough, I pulled up 10 minutes later, so about 9:55 ish and he had just opened the garage and was walking into the house. He chose to not block the driveway knowing I’d be there any moment. I pulled in, shut the garage and got my little one out of the carseat and into the house. By the time I walked in he was walking downstairs with the paperwork. My little one wanted a hug and kiss goodbye, which he gave both of us, told us he’s be back as soon as possible so we could leave and opened the front door. Our car was gone. Cade called the police because obviously in only a few minutes it had to have been stolen, a tow truck could never have moved that fast. You can see the call time above. We were told he would be circling the area and them come straight over but in the meantime to check with tow companies to be safe as “Beehive towing is known to be dirty about towing”.

I called one company in Lehi who said, “I’d call Beehive, they are the ones that do this dirty crap”. I called immediately. Sure enough it was you. You claimed it you saw his car there on your way to get another car and when you came back it was still there. Sadly, that’s just not possible as I pulled up right behind my husband and so far it hadn’t even been 10 minutes. You refused to talk, hung up on me and you know the rest. 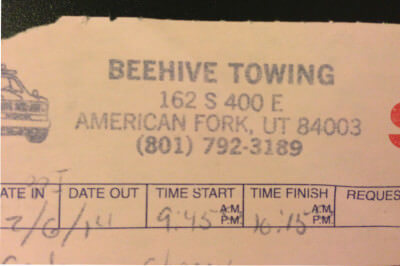 We made a police report, called our HOA and you said we could meet in the afternoon and we could pay you cash and then have it otherwise it could sit in the impound. When you gave us your paperwork to prove you had towed the cars at certain times, as seen above, it’s interesting to note that neither of us were home at 9:45 and by 10:15 when it was supposedly finished we had already called the police, and two companies including yourself. I don’t know why you chose to be dishonest. I assume you needed the money more than we did.

We’ve thought and thought about what to do and while we did file a report, and contacted someone higher to look into this we want you to understand that it is because we want to protect the next victim. Maybe you will decide to own up to everything and refund our money, maybe you wont.Clearly we are hoping you will admit your mistake. Mistakes happen, fixing them is where true integrity occurs. Either way it’s out of our hands. For our part in this fiasco we apologize, for your part we believe that carrying anger toward you isn’t going to do any good and either way this will be something that one day you will be held accountable for. We are going to leave it in the hands of the only one who can make things right and answer the demands of justice. As for us, we are letting it go. We hope that one day you will choose to be more honest, right your wrong, and remember that we forgive you. For whatever reason you were desperate for cash that you had to do this to us, we hope you got what you needed and may you one day find the peace you need.