And you thought that was all the good news…there’s more! The cheesecake filling is all made in a blender! It doesn’t get any easier than throwing everything into the Blendtec and letting it do all the work! We have discount code for you so you can love a Blendtec blender as much as we do so keep reading… 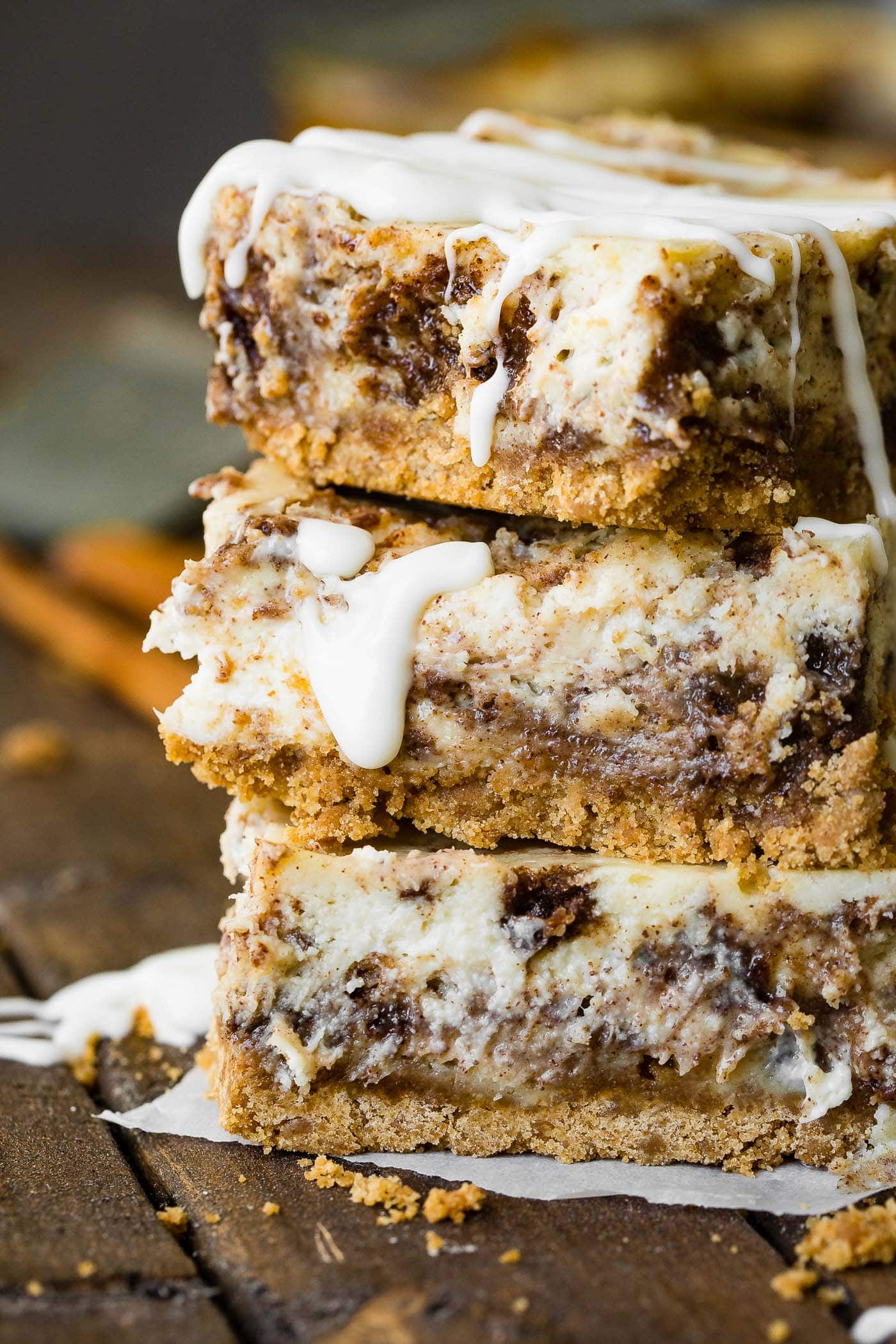 These cheesecake bars came about because we’ve made a gazillion other cheesecake recipes and it just felt so right. I did an Instagram story (@ohsweetbasil) a while back about sitting alone in the dark at the counter eating bite after bite of this cheesecake all while Cade was at the gym. HELLO, SHAME ALERT!

I normally have slightly more self control, but this dessert obliterated every ounce of willpower I have. It is THAT heavenly!

What is a Blendtec Blender?

A Blendtec blender is the best blender on the globe, the last blender you will ever need, and something we use in the kitchen every single day. You’ve seen us post about all our favorite protein shakes, like our Orange Berry Protein Shake or our Almond Joy Protein Shake. All made easy in the Blendtec! This blender is the version we’ve had for years, but we just upgraded to the professional series and we are obsessed! 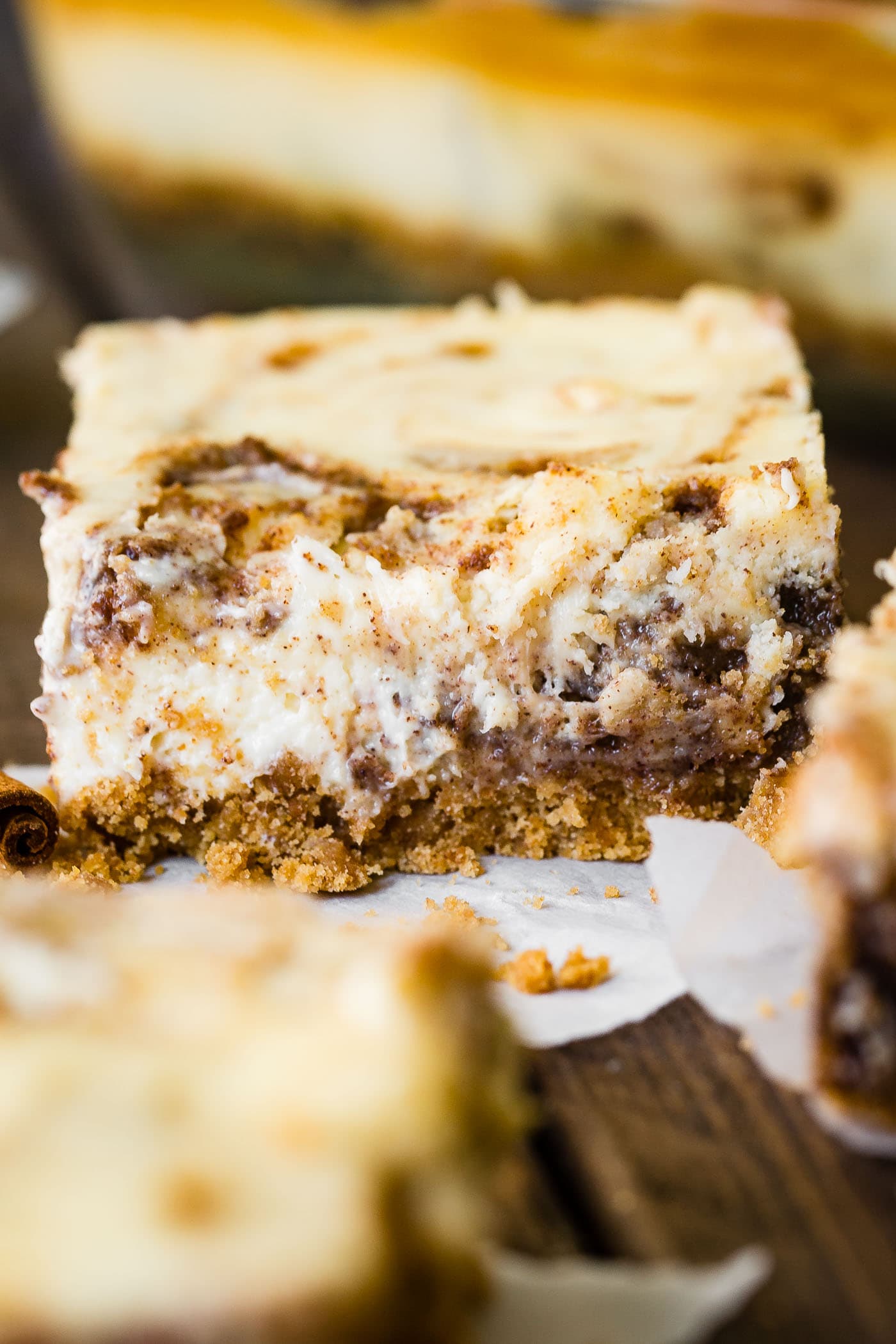 These cheesecake bars are made in three different parts – the crust, the filling and the cinnamon swirl.

To make the cinnamon graham cracker crust, you need just 4 ingredients – graham cracker crumbs, melted butter, brown sugar and cinnamon. Mix them in a bowl until they feel like wet sand and then press it into an 8×8 pan. Bake the crust in a preheated oven (350 degrees) for 8 minutes. Allow it to cool.

Reduce the heat of the oven to 325 degrees. Add the cream cheese, sugar and vanilla to your blender and blend it until smooth. We use the “batter” setting on the Blendtec. If you don’t have that setting, start with a slow speed setting and build to medium speed until just combined. Add the sour cream to the blender and blend until it is smooth. Then you want to add the eggs one at a time them into mixture until smooth. Now your cheesecake mixture is ready.

In a separate bowl, mix together the melted butter, brown sugar and flour until it is smooth.

Pour half of the filling onto the crust and then add drops of the cinnamon swirl all over the filling and swirl it in with a knife. Then pour the remaining batter on top and repeat the same steps with the cinnamon swirl. Bake the cheesecake bars for 35-40 minutes or until there isn’t much jiggle in the middle. Then it needs to go into the refrigerator for at least 2 hours to finish setting up. 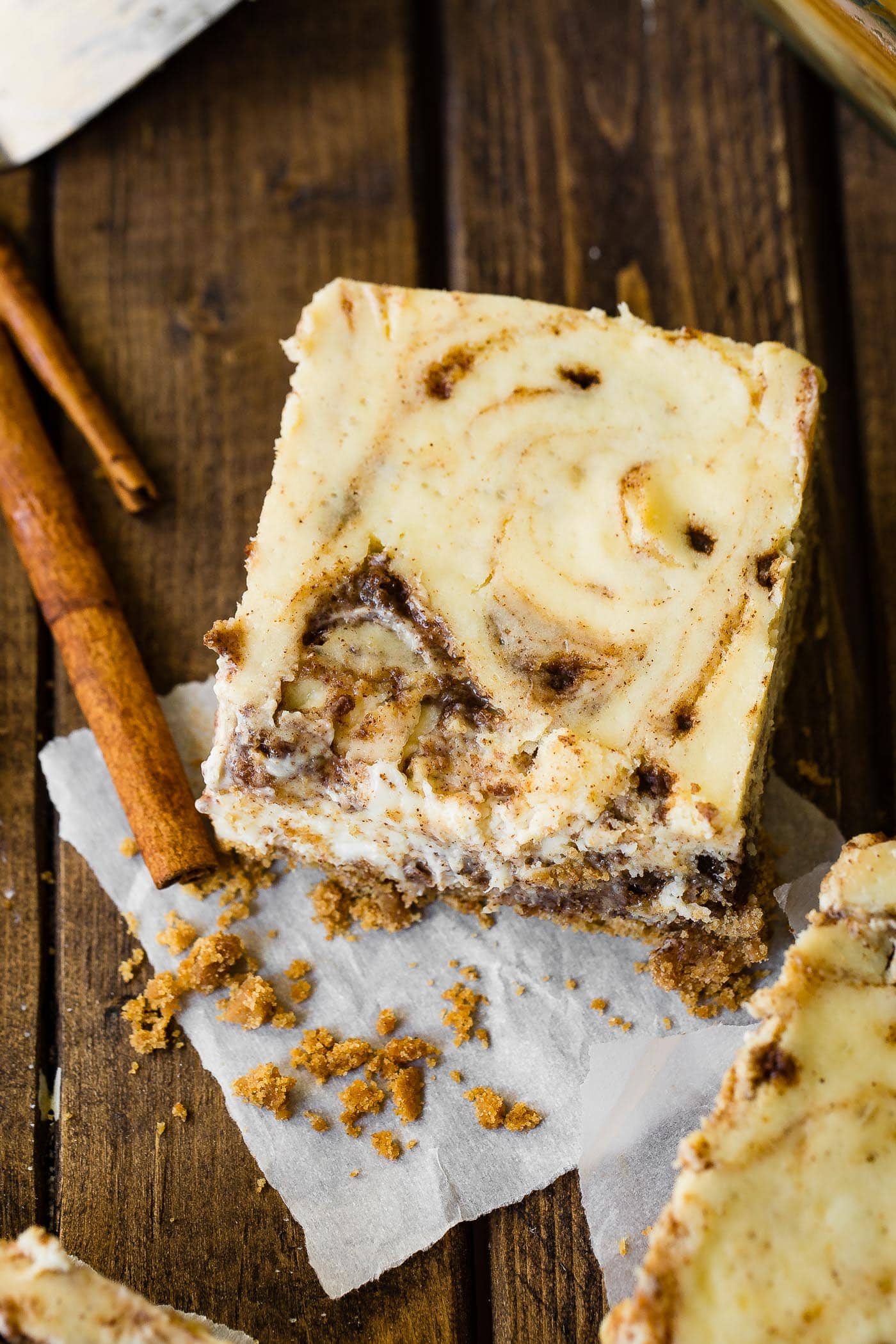 How Do You Know When Cheesecake Is Done?

I’m sure there’s an exact science to this, but my foolproof way is to do the jiggle test. With a hot pad, grab one side of your baking dish and give it a gentle jiggle. If there is a lot of jiggle in the middle of your cheesecake, let it bake for a couple more minutes. When it is done, there won’t be hardly any jiggle at all.

Can You Make Cheesecake With Neufchâtel Cheese?

Yes, you can totally use neufchatel cheese in cheesecake. It is usually cheaper and lower in fat, so winning!!

Can You Substitute Greek Yogurt For Sour Cream?

Yes, plain Greek yogurt is a great substitute for sour cream in cheesecake. It is high in protein and lower in fat, so it pretty much makes these cheesecake bars healthy for you. Ok, not really at all, but it does help me feel a little better about devouring them alone in the dark!

Can Cheesecake Cause Food Poisoning?

Just about any food can cause food poisoning if not cooked or stored properly. The main cause for concern with cheesecake is the eggs in it. If it is baked properly, there is no need to worry at all. Once the cheesecake is baked, it should be stored in the refrigerator and not left out at room temperature for more than an hour or two. 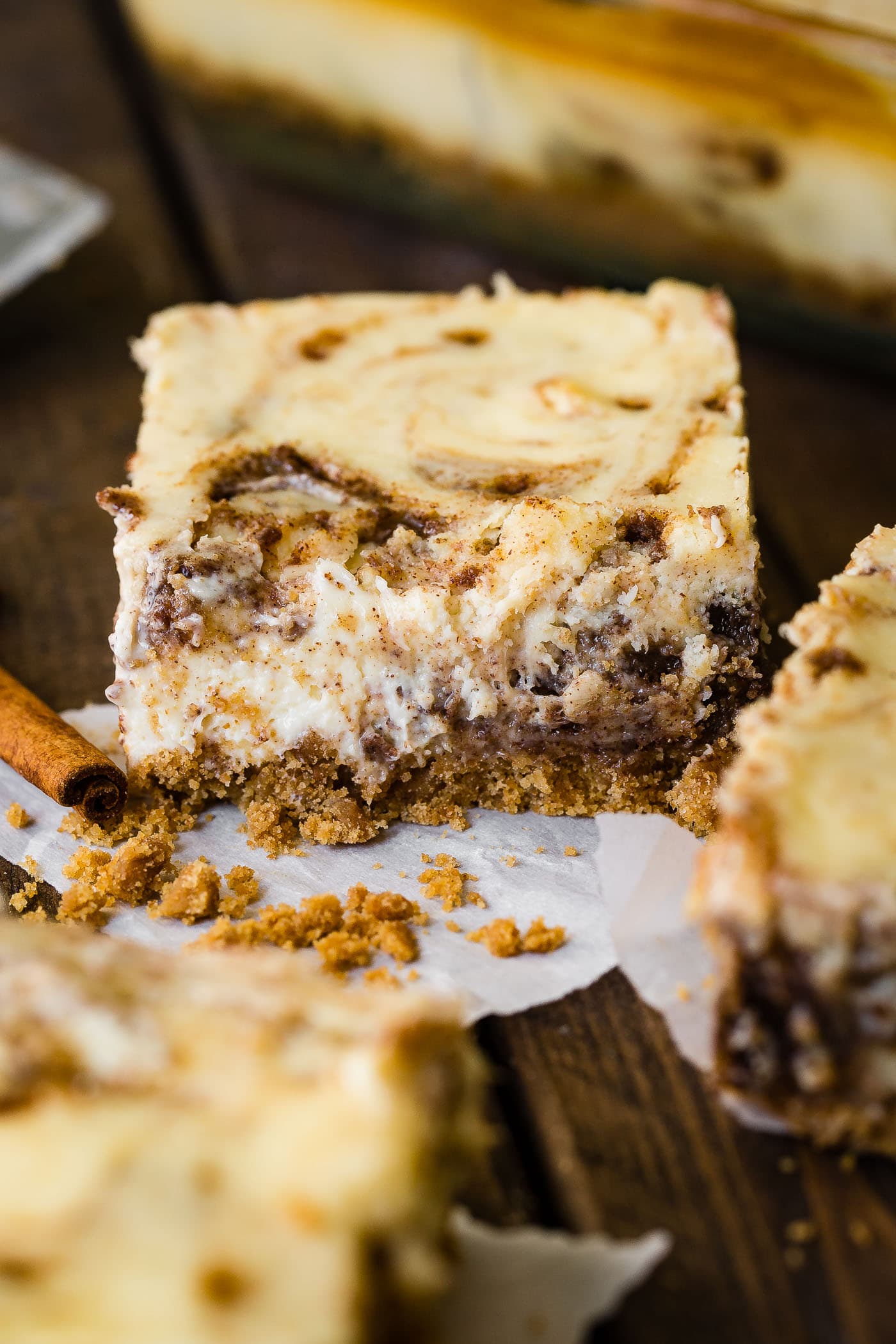 Does Cheesecake Need To Be Refrigerated?

Yes, cheesecake should be kept in the refrigerator. With all the dairy products in it, it is prone to spoil if it reaches unsafe temperatures. These cheesecake bars need to be refrigerated to set up properly, so you’ll be serving them right from the refrigerator anyway. Then we when you are done serving, just stick it right back in the fridge…if there are any leftovers!

Can Cheesecake Be Frozen?

Yes, this cheesecake freezes great! Allow it to cool completely and wrap it in foil and then plastic wrap. Then place it in a plastic ziploc bag. It will last in the freezer for up to 3 months. When you are ready to eat it, allow it to thaw in the refrigerator and then devour! We like to cut these bars into individual servings and then freeze them. Then you can pull out however many servings you want! 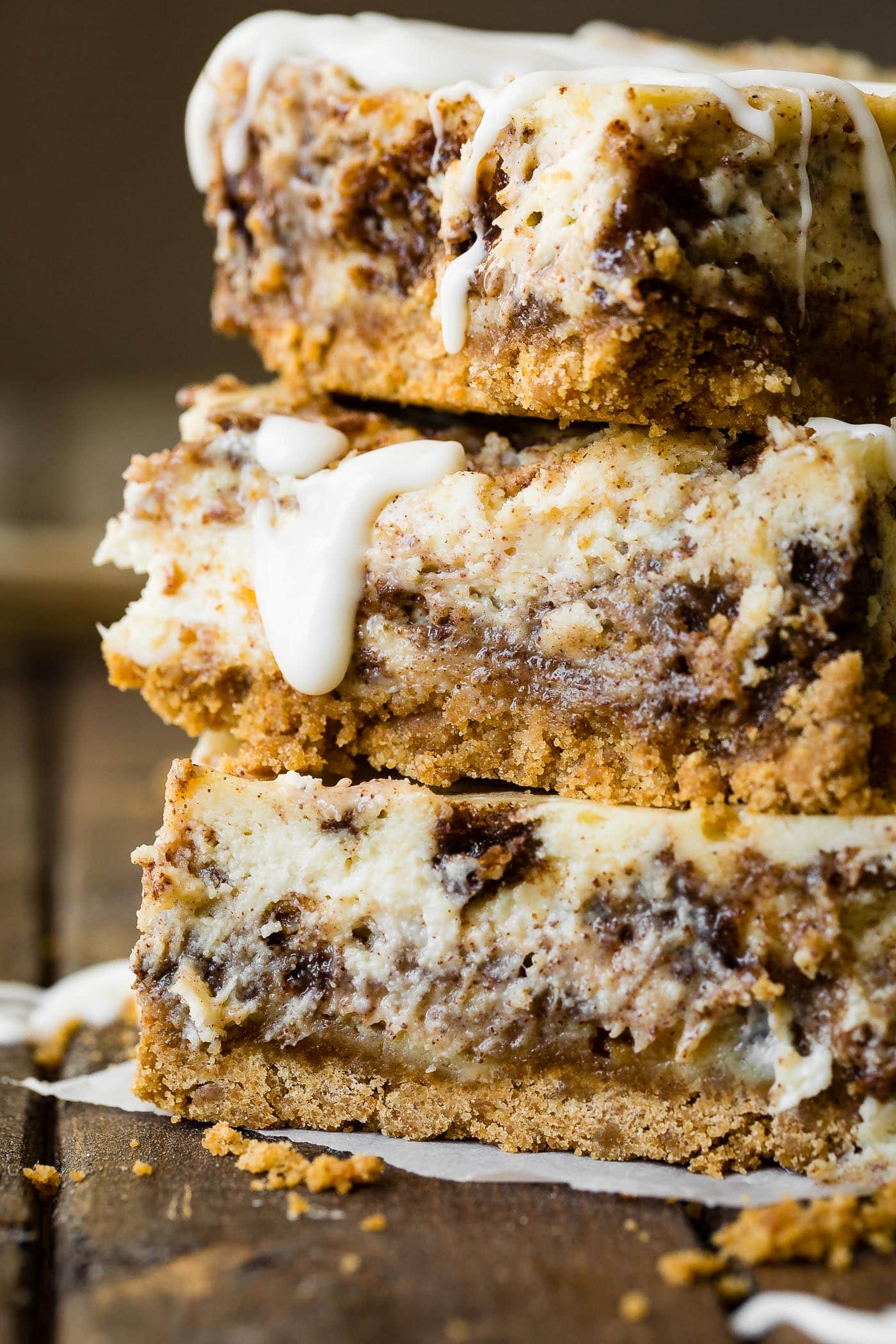 Ok, the moment you all have been reading and waiting for! Go get yourself a Blendtec blender and use the discount code ohsweetbasil for 25% off your purchase! You’re welcome! Do it! You’ll never regret it!

They have settings for anything you will ever want to blend. It stops and tells you when you need more liquid. There are no sharp blades to try and clean or scoop around. And probably my favorite feature, when you’re done using it, add a little water and a couple drops of dish soap, push the clean button, and it pretty much cleans itself!  They are just THE BEST!

***ALERT***: Before we get a hundred comments and emails, the frosting drizzle on these in the photos is just a mixture of powdered sugar and cream. We wanted to love it, but we just didn’t. We like them better without it. So they make for pretty pictures, but we haven’t included it in the recipe card.

Blender Cinnamon Roll Cheesecake Bars is your next favorite dessert! That cinnamon swirl is everything and the cinnamon graham cracker crust…I could eat it plain! Put it all together and you can’t resist. Nom nom nom! 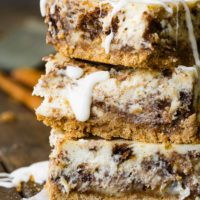