A cheesy southwestern chicken tortilla soup plus a video so you can see exactly how to make it! It’s loaded with flavor, chicken, corn, and even potatoes!

We never say, Cheesy Southwestern Chicken Tortilla Soup. It’s too long, so we say, The Soup. It needs nothing else as it is The soup recipe of your dreams. 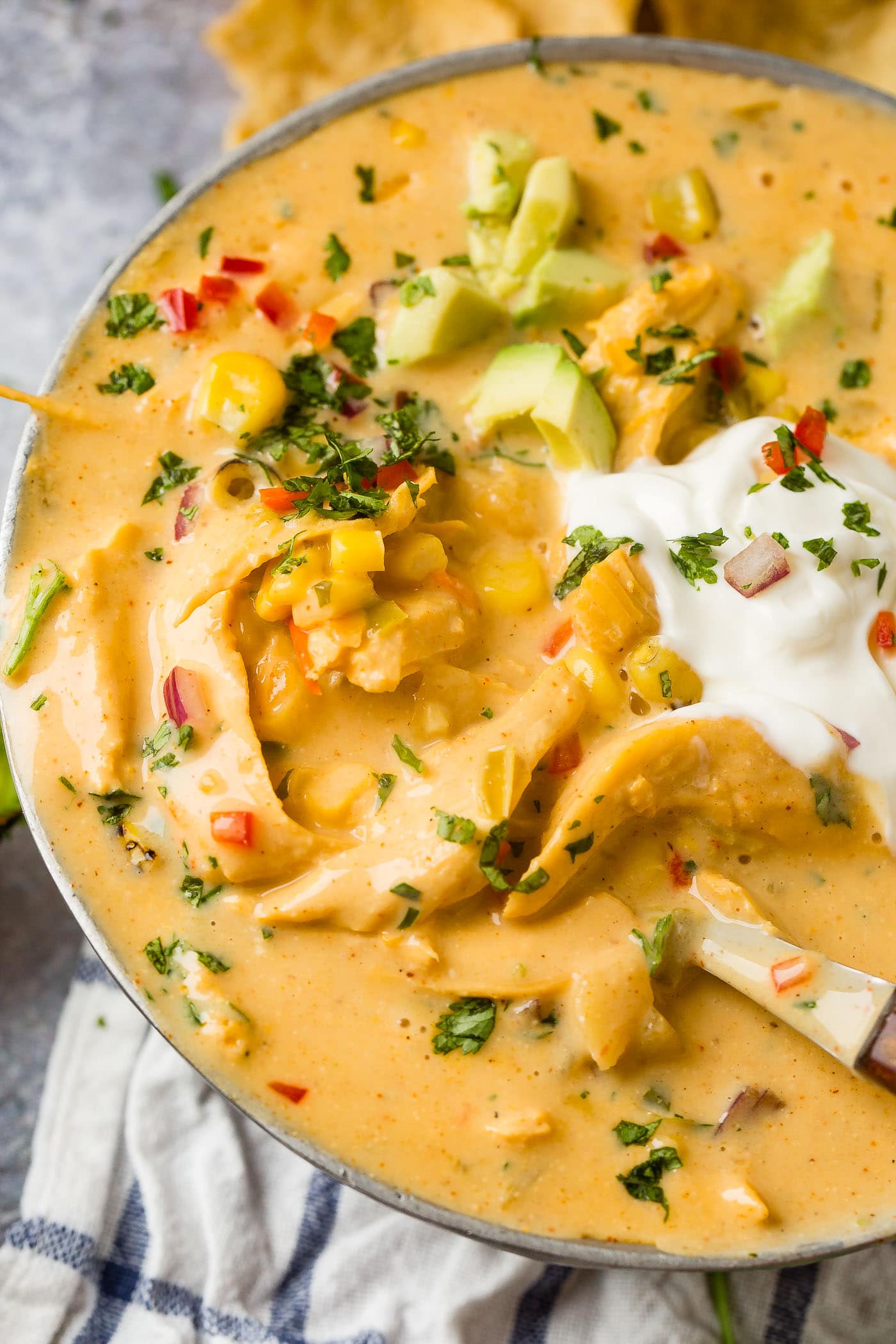 We originally posted a recipe for this soup that’s an organic, mostly from scratch option. It’s a wonderful soup but I told Cade, I kept having this nagging feeling that I should post the original recipe. And we all know you should never ignore those feelings. So let’s dive into a quick and easy cheesy southwestern chicken tortilla soup recipe. 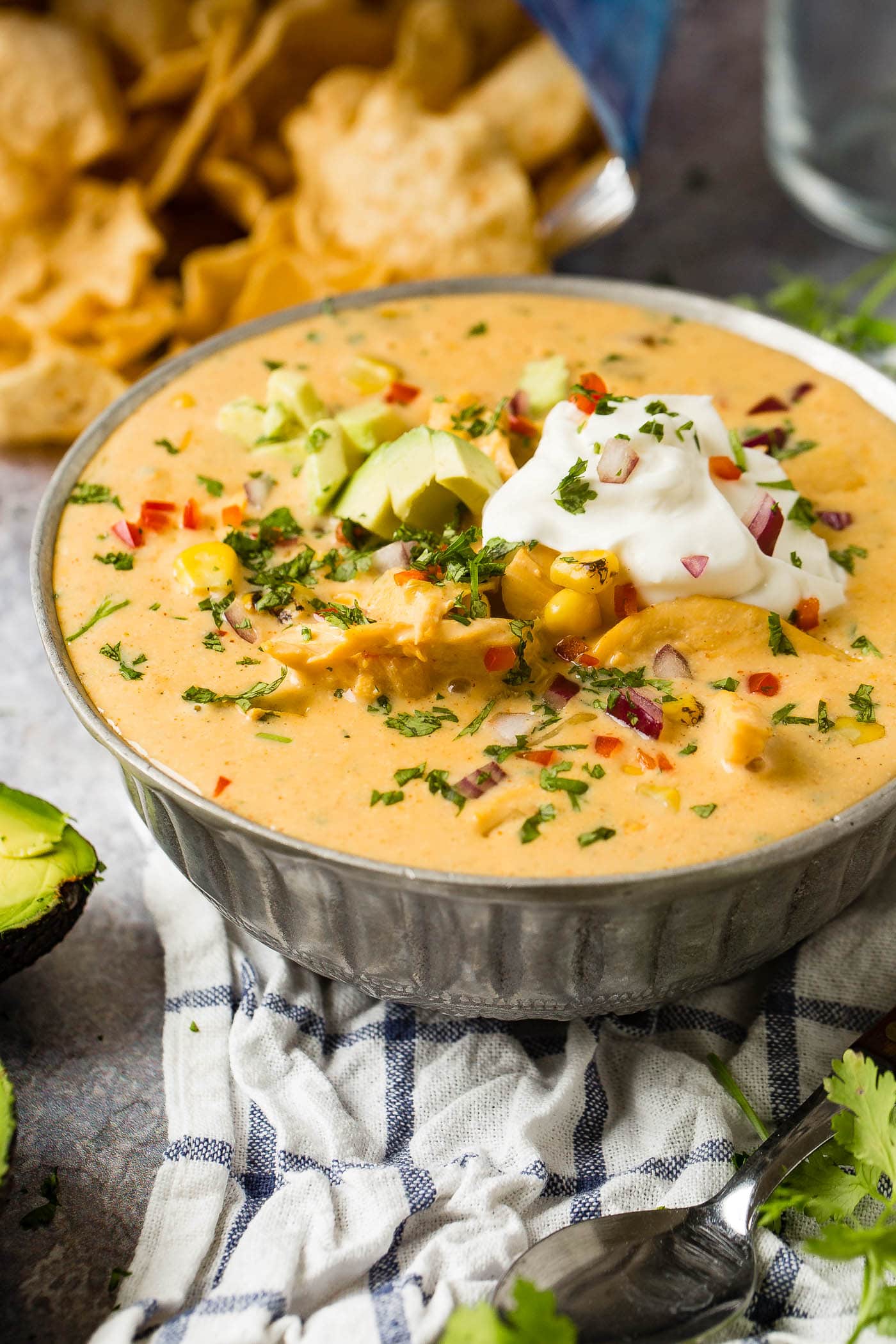 I learned this Southwestern Chicken Tortilla Soup recipe in college and though I’ve occasionally felt a little guilty for how ridiculously unhealthy it is thanks to:

I still LOVE IT.

I know, your arteries are literally closing themselves up just at the thought. But it’s worth it, so get out your fat pants, and let’s settle in to a big bowl together.

There are a lot of chicken taco, chicken tortilla, and cheesy tortilla soup recipes out there but this is the one that everyone obsesses over. I actually don’t have the original recipe from the Gillespie family, and I’m not sure how to reach out to them to get it, so this is just the one in my head. I’m sure it’s close, and it’s definitely our favorite as I’ve just changed things to fit my tastes. 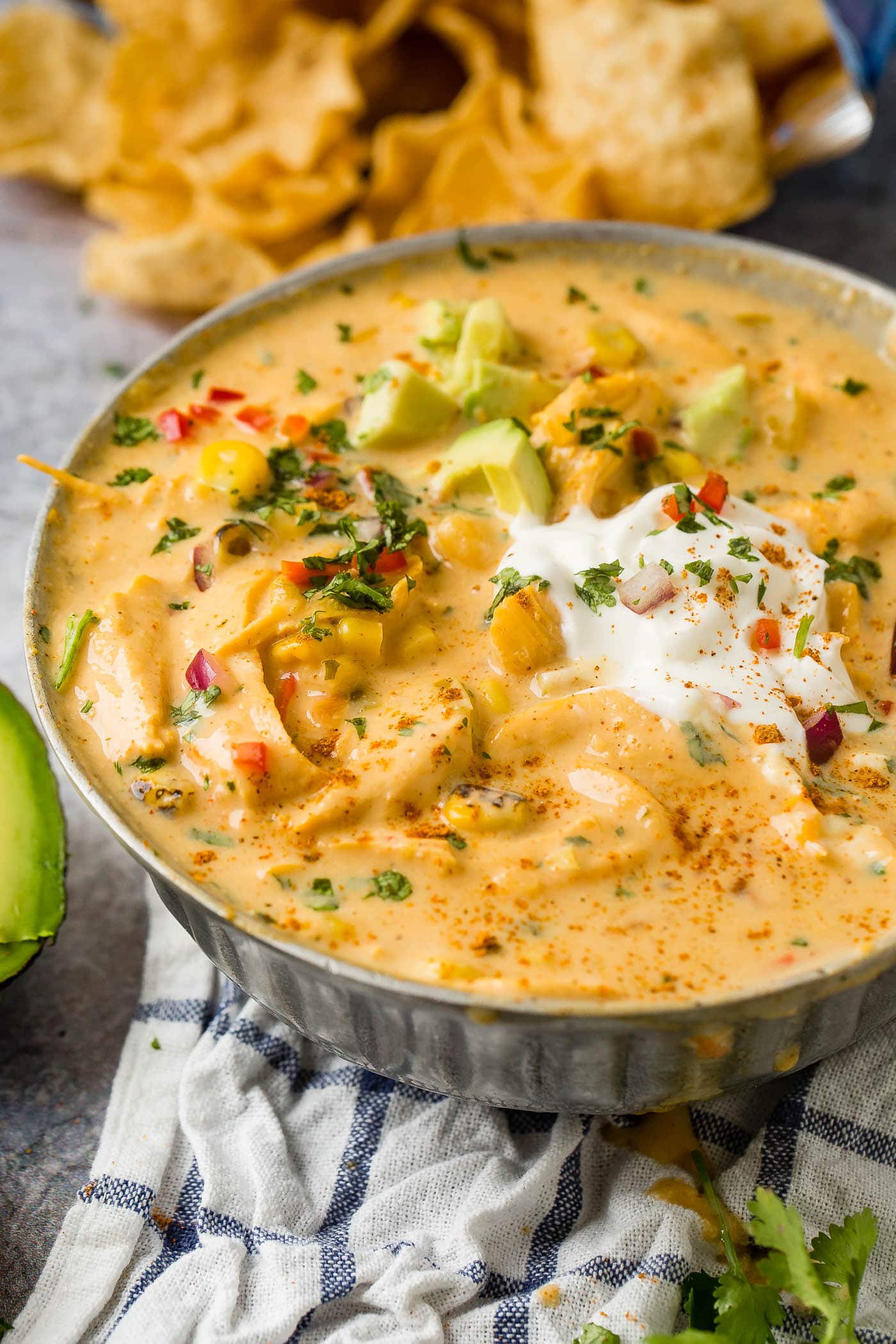 In fact, I’ll make little notes for you in the recipe on how we alter things in case you’re wondering.

What to Serve with Tortilla Soup

Yes, the Tostitos Scoops chips are an essential part of the recipe. You can do it two ways, but no other chip works and we’ve tried. This one just tastes the best with it and no, this isn’t a sponsored post, haha. Our kids love to use the chips like spoons and scoop the soup, one of their only opportunities to be allowed to eat soup without a spoon.

Or if you’re too classy like I am, I crumble the chips on top and eat it with a spoon. 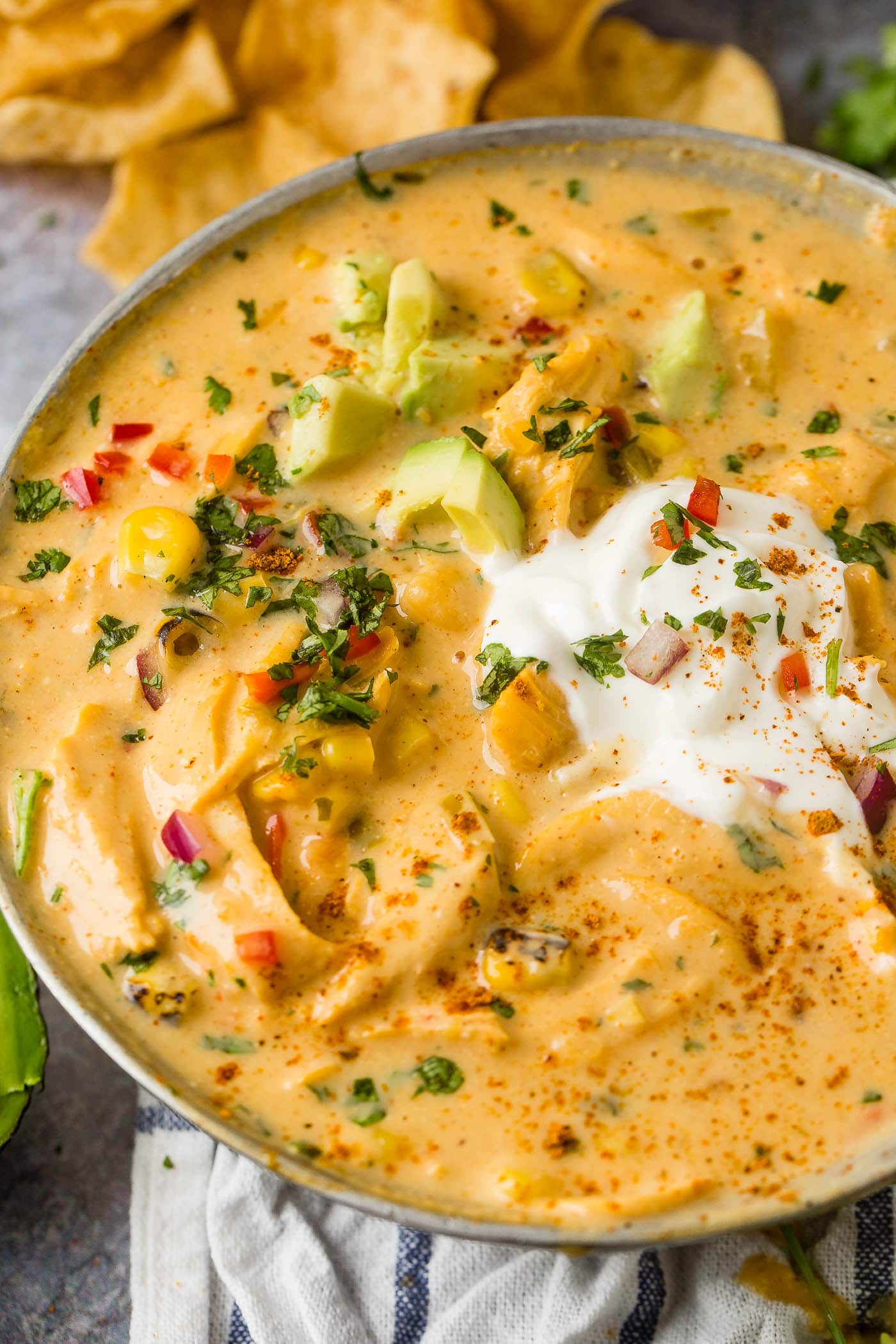 What is Salsa Con Queso?

Salsa con queso is a mixture of queso cheese dip and salsa.

The Tostitos Salsa Con Queso gets dumped in the pot followed by a simple list of ingredients: 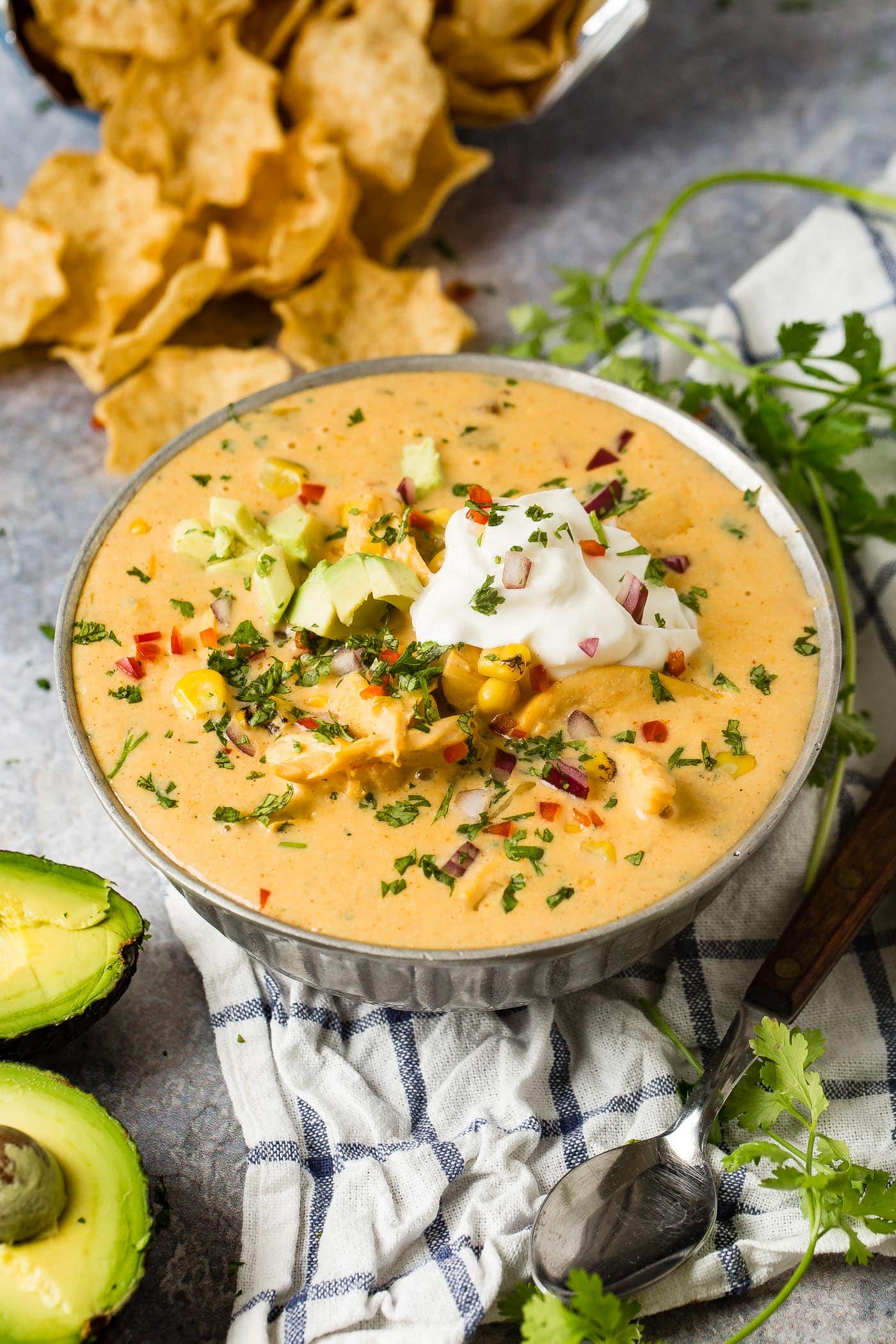 How Do You Make Shredded Chicken?

The best shredded chicken, in my humble opinion, is made by baking, not boiling the chicken.

Place in a dish, sprinkle with salt and pepper and cover with foil.

Shred using two forks to pull apart the meat or plop it in a KitchenAid. 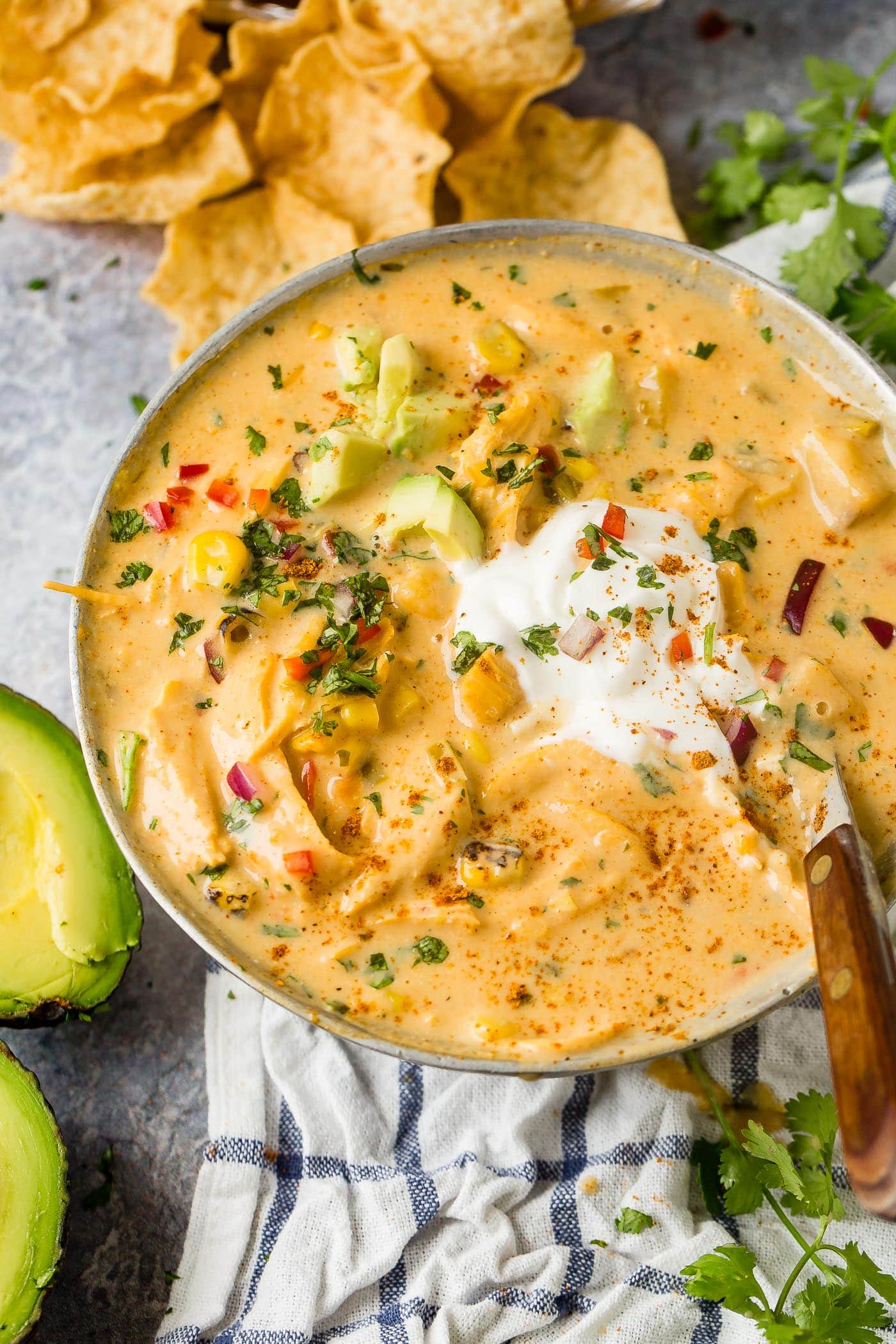 I love that this soup can be heated and eaten right away or simmered on the stove.

And it tastes perfect for up to a week after.

I don’t love it frozen.

Anything with cream isn’t awesome frozen.

But that’s ok, you wont have a drop left to save. 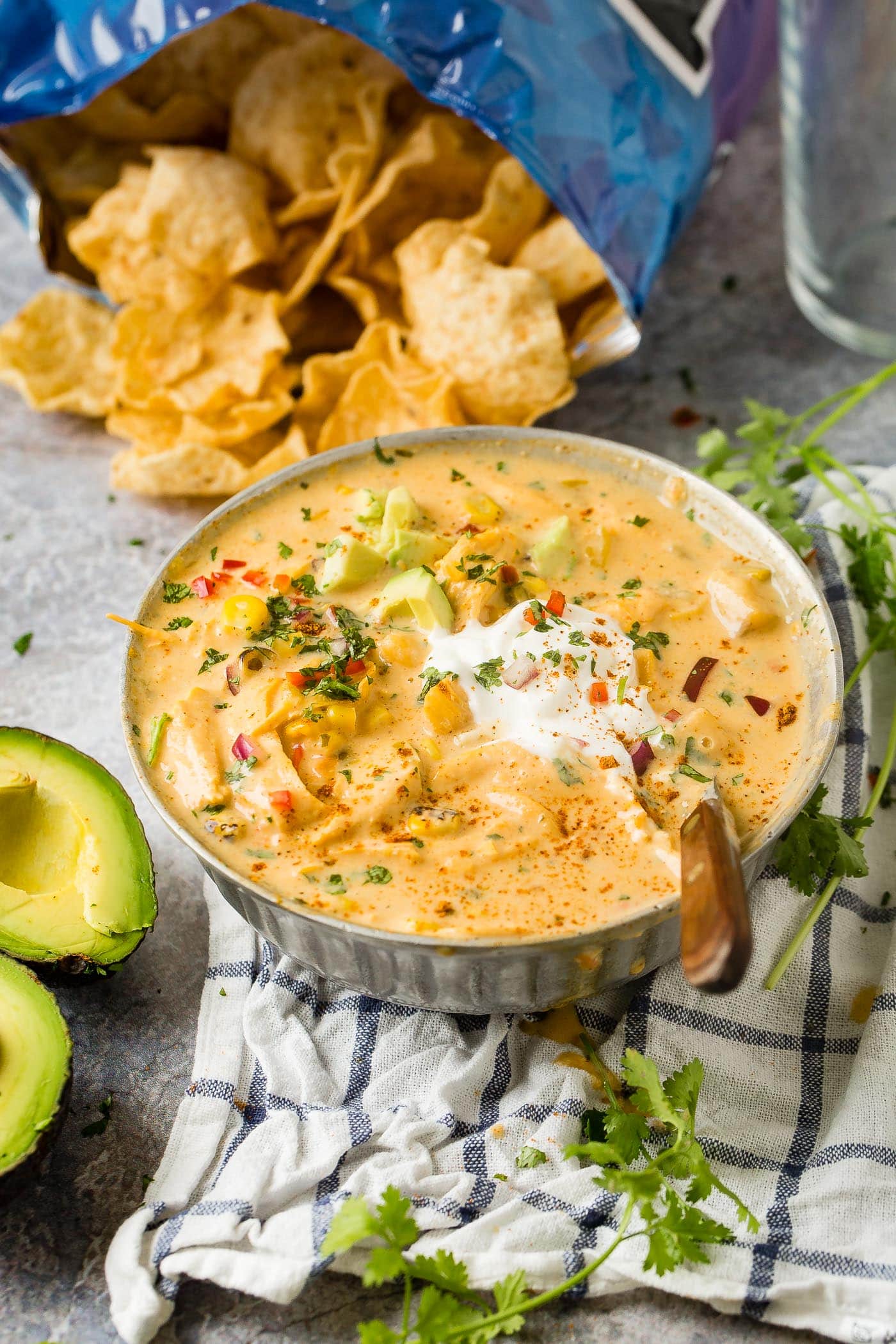 Even better, Cheesy Southwestern Chicken Tortilla soup to double, triple, heck you can even go lunch lady style and quadruple this sucker. Make it, love it and report back to me. 🙂

Want to see what others are saying about this soup after they’ve tried it? Check out our PIN and all of the great reviews! 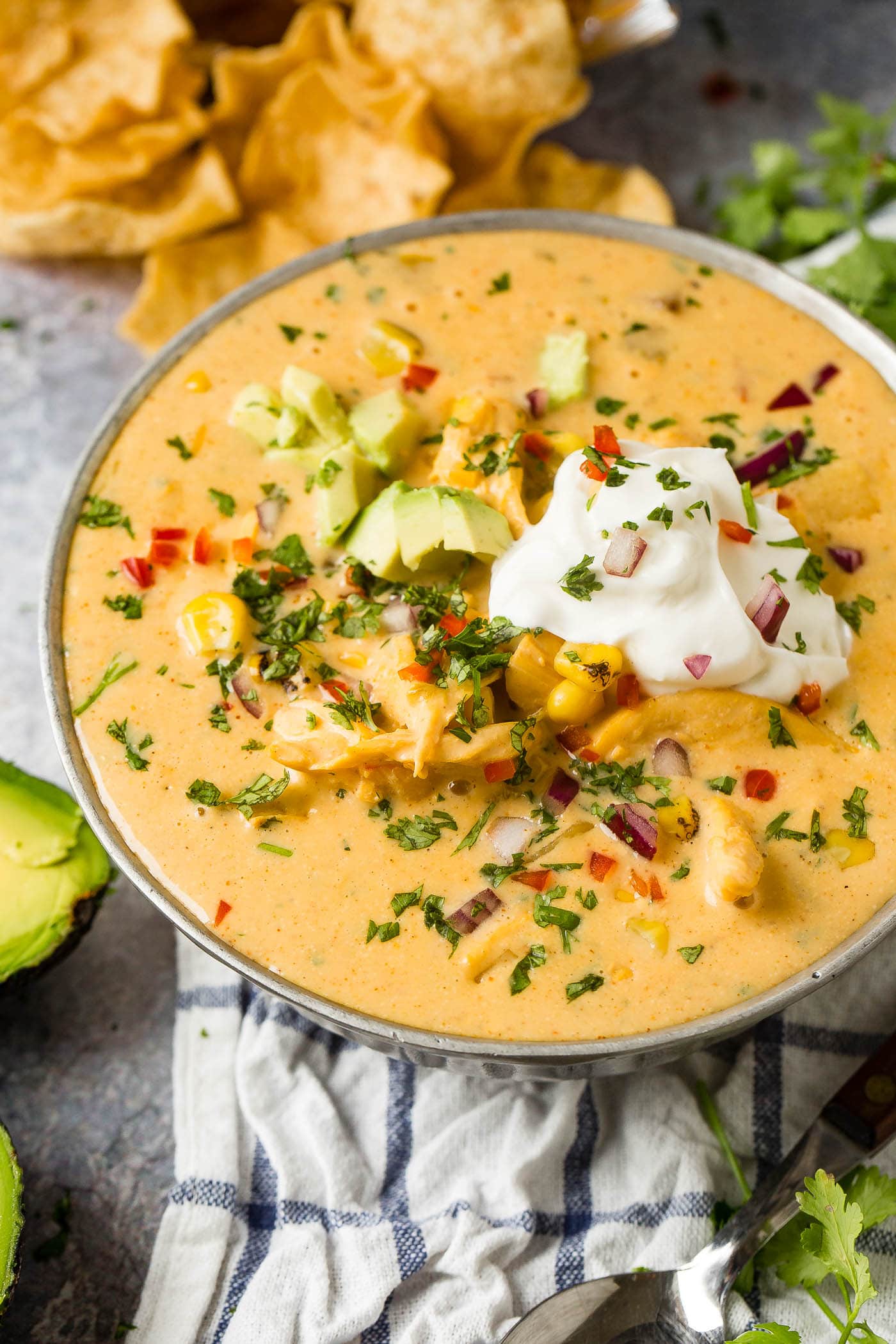 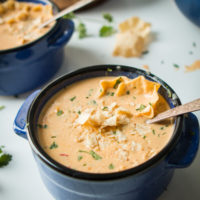 4.37 from 80 votes
Prep Time: 30 minutes
Cook Time: 30 minutes
Total Time: 1 hour
Servings: 6
Save Recipe Print Recipe
We never say, Cheesy Southwestern Chicken Tortilla Soup. It's too long, so we say, The Soup. It needs nothing else as it is The soup recipe of your dreams.

Take our cheesy tortilla soup, use beans and ground beef instead of chicken and you’ve got the best cheesy chili ever! 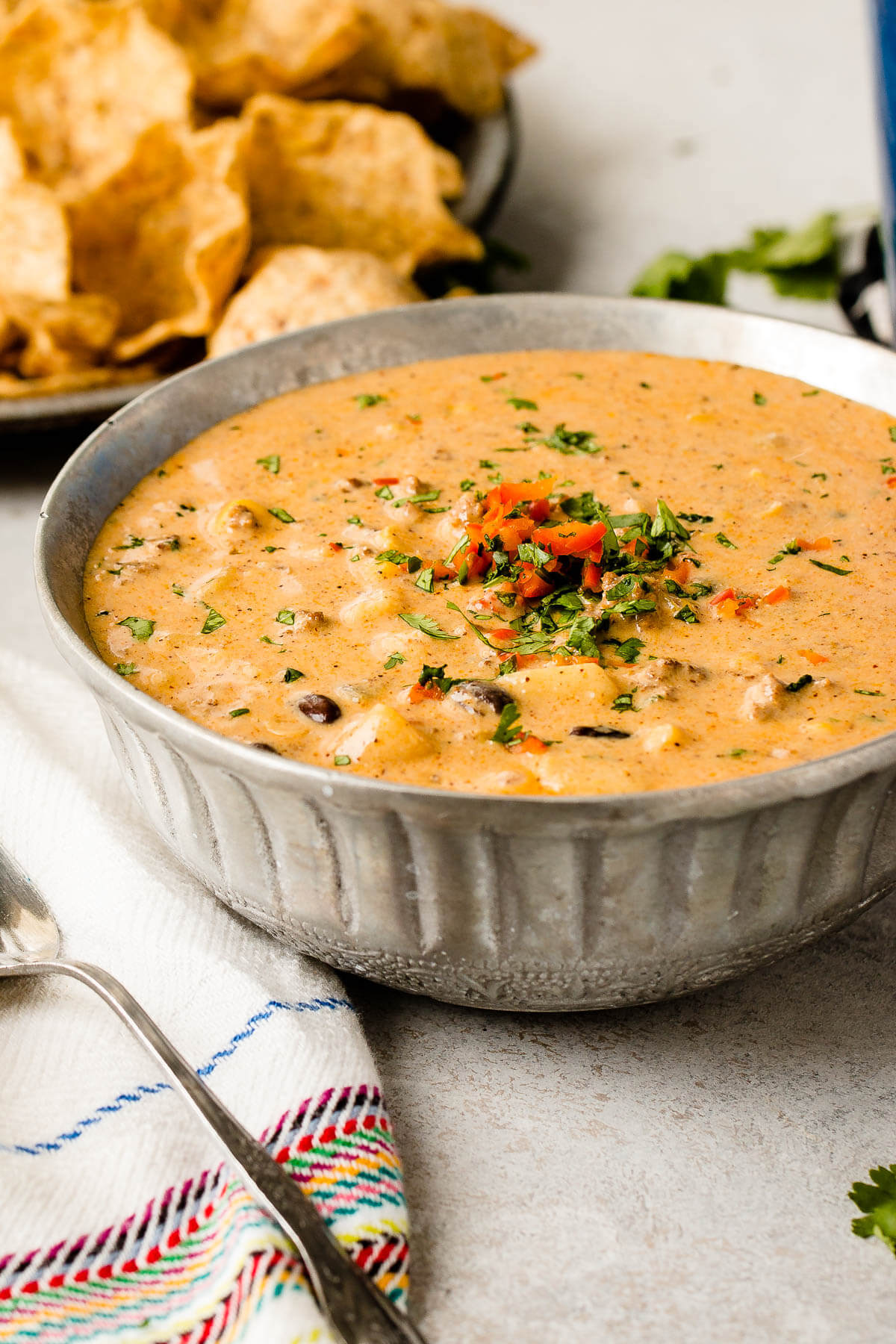 Try another version of Chicken Tortilla Soup and let us know what you think!