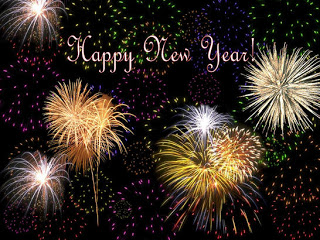 New Year’s revelers in Spain consume twelve grapes at midnight—one grape for each stroke of the clock. This dates back to 1909, when grape growers in the Alicante region of Spain initiated the practice to take care of a grape surplus. The idea stuck, spreading to Portugal as well as former Spanish and Portuguese colonies such as Venezuela, Cuba, Mexico, Ecuador, and Peru. Each grape represents a different month, so if for instance the third grape is a bit sour, March might be a rocky month. For most, the goal is to swallow all the grapes before the last stroke of midnight, but Peruvians insist on taking in a 13th grape for good measure.

Cooked greens, including cabbage, collards, kale, and chard, are consumed at New Year’s in different countries for a simple reason — their green leaves look like folded money, and are thus symbolic of economic fortune. The Danish eat stewed kale sprinkled with sugar and cinnamon, the Germans consume sauerkraut (cabbage) while in the southern United States, collards are the green of choice. It’s widely believed that the more greens one eats the larger one’s fortune next year.

Legumes including beans, peas, and lentils are also symbolic of money. Their small, seedlike appearance resembles coins that swell when cooked so they are consumed with financial rewards in mind. In Italy, it’s customary to eat cotechino con lenticchie or sausages and green lentils, just after midnight—a particularly propitious meal because pork has its own lucky associations. Germans also partner legumes and pork, usually lentil or split pea soup with sausage. In Brazil, the first meal of the New Year is usually lentil soup or lentils and rice, and in Japan, the osechi-ryori, a group of symbolic dishes eaten during the first three days of the new year, includes sweet black beans called kuro-mame.

In the Southern United States, it’s traditional to eat black-eyed peas or cowpeas in a dish called hoppin’ john. There are even those who believe in eating one pea for every day in the new year. This all traces back to the legend that during the Civil War, the town of Vicksburg, Mississippi, ran out of food while under attack. The residents fortunately discovered black-eyed peas and the legume was thereafter considered lucky.

The custom of eating pork on New Year’s is based on the idea that pigs symbolize progress. The animal pushes forward, rooting itself in the ground before moving. Roast suckling pig is served for New Year’s in Cuba, Spain, Portugal, Hungary, and Austria—Austrians are also known to decorate the table with miniature pigs made of marzipan. Different pork dishes such as pig’s feet are enjoyed in Sweden while Germans feast on roast pork and sausages. Pork is also consumed in Italy and the United States, where thanks to its rich fat content, it signifies wealth and prosperity.

Fish is a very logical choice for the New Year’s table. According to Mark Kurlansky, author of Cod: A Biography of the Fish that Changed the World, cod has been a popular feast food since the Middle Ages. He compares it to turkey on Thanksgiving. The reason? Long before refrigeration and modern transportation, cod could be preserved and transported allowing it to reach the Mediterranean and even as far as North Africa and the Caribbean. Kurlansky also believes the Catholic Church’s policy against red meat consumption on religious holidays helped make cod, as well as other fish, commonplace at feasts. The Danish eat boiled cod, while in Italy, baccalà, or dried salt cod, is enjoyed from Christmas through New Year’s. Herring, another frequently preserved fish, is consumed at midnight in Poland and Germany—Germans also enjoy carp and have been known to place a few fish scales in their wallets for good luck. The Swedish New Year feast is usually a smorgasbord with a variety of fish dishes such as seafood salad. In Japan, herring roe is consumed for fertility, shrimp for long life, and dried sardines for a good harvest (sardines were once used to fertilize rice fields).

Cakes and other baked goods are commonly served from Christmas to New Year’s around the world, with a special emphasis placed on round or ring-shaped items. Italy has chiacchiere, which are honey-drenched balls of pasta dough fried and dusted with powdered sugar. Poland, Hungary, and the Netherlands also eat donuts, and Holland has ollie bollen, puffy, donut-like pastries filled with apples, raisins, and currants.
In certain cultures, it’s customary to hide a special trinket or coin inside the cake—the recipient will be lucky in the new year. Mexico’s rosca de reyes is a ring-shaped cake decorated with candied fruit and baked with one or more surprises inside. In Greece, a special round cake called vasilopita is baked with a coin hidden inside. At midnight or after the New Year’s Day meal, the cake is cut, with the first piece going to St. Basil and the rest being distributed to guests in order of age. Sweden and Norway have similar rituals in which they hide a whole almond in rice pudding—whoever gets the nut is guaranteed great fortune in the new year.
Cakes aren’t always round. In Scotland, where New Year’s is called Hogmanay, there is a tradition called “first footing,” in which the first person to enter a home after the new year determines what kind of year the residents will have. The “first footer” often brings symbolic gifts like coal to keep the house warm or baked goods such as shortbread, oat cakes, and a fruit caked called black bun, to make sure the household always has food.

What Not to Eat

In addition to the aforementioned lucky foods, there are also a few to avoid. Lobster, for instance, is a bad idea because they move backwards and could therefore lead to setbacks. Chicken is also discouraged because the bird scratches backwards, which could cause regret or dwelling on the past. Another theory warns against eating any winged fowl because good luck could fly away.
Now that you know what to eat, there’s one more superstition—that is, guideline—to keep in mind. In Germany, it’s customary to leave a little bit of each food on your plate past midnight to guarantee a stocked pantry in the New Year. Likewise in the Philippines, it’s important to have food on the table at midnight. The conclusion? Eat as much lucky food as you can, just don’t get too greedy—or the first place you’ll be going in the new year is the gym.