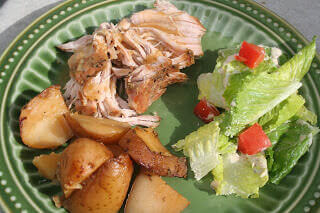 This Herb Crusted Pork Roast is one of those easy Sunday meals that takes hardly any ingredients and you do nothing other than let the pork cook. I think everyone needs a recipe like that. The best part about it is that the pork is actually really flavorful and makes a fantastic gravy from the drippings. We threw in a few red potatoes and served everything alongside a really simple Caesar salad. Hooray for relaxing instead of worrying about dinner!

Pork is a healthy alternative to red meat.

Pork is relatively lean, not as low-fat as chicken or fish.

Can You Cook a Pork Roast In A Slow Cooker?

A simple way to cook a pork roast is using a slow cooker or crock pot.

Season the roast, pan sear if desired, but it is not necessary.

Place the roast in the slow cooker and cook for 6-8 hours on low.

Can Pork Roast Be a Little Pink?

Pork should be cooked to an internal temperature of 145 degrees F.

After the pork reaches 145 degrees, it should be allowed to rest for 3 minutes.

Even if it is still a little pink, it is safe to eat as long as it reached 145 degrees. 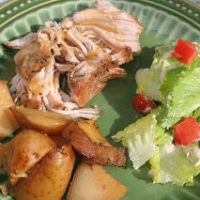