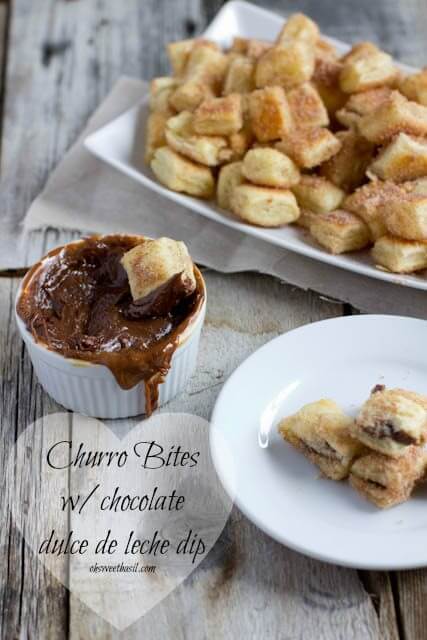 Why am I writing this post at 9:00 at night? Now I’m craving these babies!! Oh, they are so, stinking good! I have heard that Costco and Disneyland have really yummy churros, unfortunately I’ve had neither. And every time I look up a recipe for churros I usually throw in my hat and call it quits. I just don’t feel up to the hassle. Or at least I didn’t. Then we headed out to Bryan, and Lisa’s house for a relaxing Saturday afternoon and I decided to experiment with an easy churro recpie. It did not work. And I’ve been on the hunt ever since. 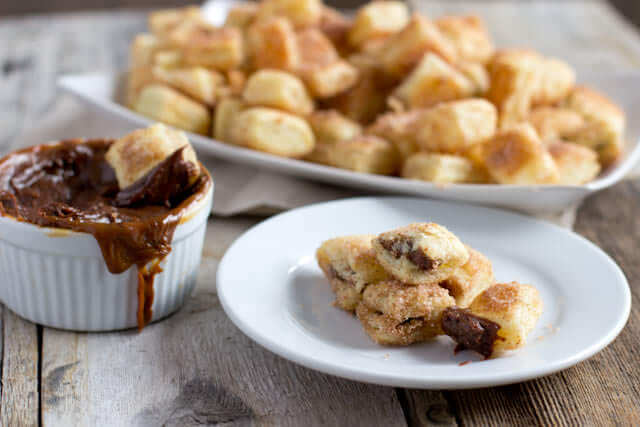 We chose to use Peppridge Farm  puff pastry which is one of the all time best pre-made items that you can buy for sweet or savory dishes. Kind of like these Avocado Napoleans, Crimini Tartlets, etc. I thought I could be tricky and roll the puff pastry in the butter/cinnamon sugar mixture ahead of time, but the dough is too light and the butter just makes them flat and nasty. However, after you pull them out of the oven if you hurry and do the butter and then cinnamon sugar they actually stay really well coated. And then you have to dunk them.

I actually posted a stuffed churro recipe, (basically the same thing only you stuff the churros) at Sweet Treats More, so you’ll have to check that out too.  But, while we (Mr. Handsome and I) were talking about making churros he mentioned that he wanted to dip his in chocolate or dulce de leche. GENIUS! I stirred (and it was hard work) the two together and we all had a moment of silence for the chocolatey perfection. Seriously, no one was talking. It was delicious.

What Is Puff Pastry?

Puff pastry is a light, buttery, flaky, pastry that is useful for making both sweet and savory dishes.

Puff pastry is made from a  dough composed of dough and butter or other solid fat.

The butter is put inside the dough, making a paton which is repeatedly folded and rolled out before baking.

Where Do You Find Puff Pastry?

Puff pastry sheets are found in the freezer section of a grocery store.

Is Dulce de Leche The Same as Caramel?

Dulce de Leche is not the same thing as caramel.

Dulce de leche is usually made by heating up condensed milk.

Caramel is made with a base of water, heavy whipping cream, sugar, and butter.

While they do have similar flavors, they are not the same thing. 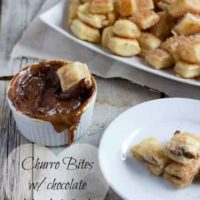