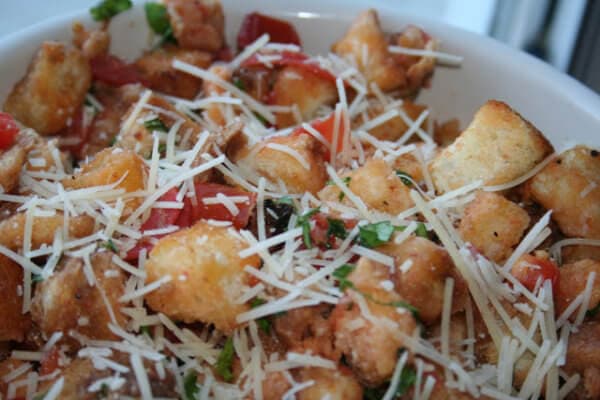 Well, I know where NOT to take this salad. Haha. I think some people are just really basic when it comes to food. That’s not a bad thing at all. It’s just that some prefer to stick to good ‘ol iceberg salad and are a little apprehensive about trying new things. It happens. I took this Panzanella Salad to a get together and no one tried it. But, guess what, it’s delicious. They missed out. Who doesn’t love panzanella? I did make one huge mistake in trying to hurry so the roasted tomatoes were really warm and kinda mushed things up a bit. Oh well. Ok, on to the recipe…

Panzanella is a Tuscan chopped salad of bread and tomatoes.

Panzanella may also contain onions and basil, and is dressed with olive oil and vinegar.

What Kind Of Bread Is Used In Panzanella?

Traditional panzanella is made with stale, dried bread.

Italian bread that is a couple of days old can be used to make panzanella.

Are Tomatoes Good For You?

Tomatoes are a great source of vitamin C, potassium, folate and vitamin K.

Tomatoes are also a great source of the antioxidant lycopene, which has been linked to many health benefits, including reduced risk of heart disease and cancer. 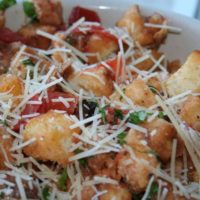