Sausage and peppers in the same dish is such a stellar combo! Toss in some crispy gnocchi and a luscious sauce, and you’ll be adding this quick and easy dinner to your menu this week!

Our 20 minute sausage and peppers gnocchi is actually a meal of forgotten things. I found myself standing at the fridge years and years ago staring into a bunch of random ingredients and nothing to pull it all together; a little chicken broth, a chunk of onion and peppers from a taco night, and these random sausages a friend had given us. Not really enough of anything to make a full meal, or so I thought.

I’ve seen sausage and peppers stuffed into hoagie rolls enough to know that I could probably do something similar but without bread or rolls in the house at the time I needed to get creative and as a newlywed that also required cheap. I did not have enough money to go buy a bunch of stuff but I did have a lone package of pasta. 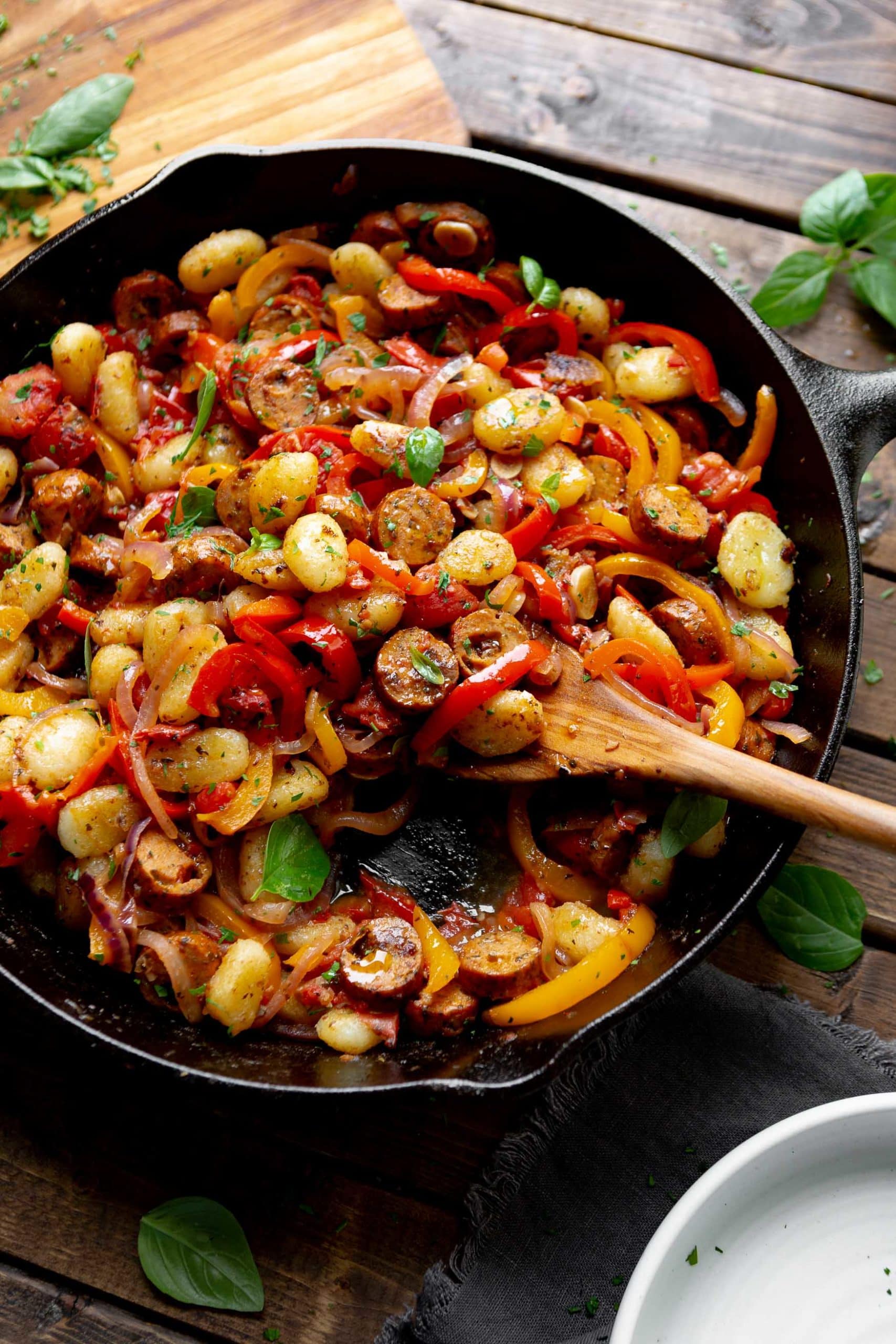 Over the years we’ve changed up this recipe a gazillion times until a little white cooking wine and the switch from pasta to gnocchi brought it all home. This crispy gnocchi with peppers and onions recipe only takes 20 minutes though the first time may be a little longer as you get the hang of it. Once you’ve done it once it’s a breeze.

Cook this, plate it.

Cook that, plate it.

Crisp the gnocchi, plate it.

Add the first two plates and sauce ingredients back in, simmer the sauce and then throw in the gnocchi, seasoning to taste. That’s it! 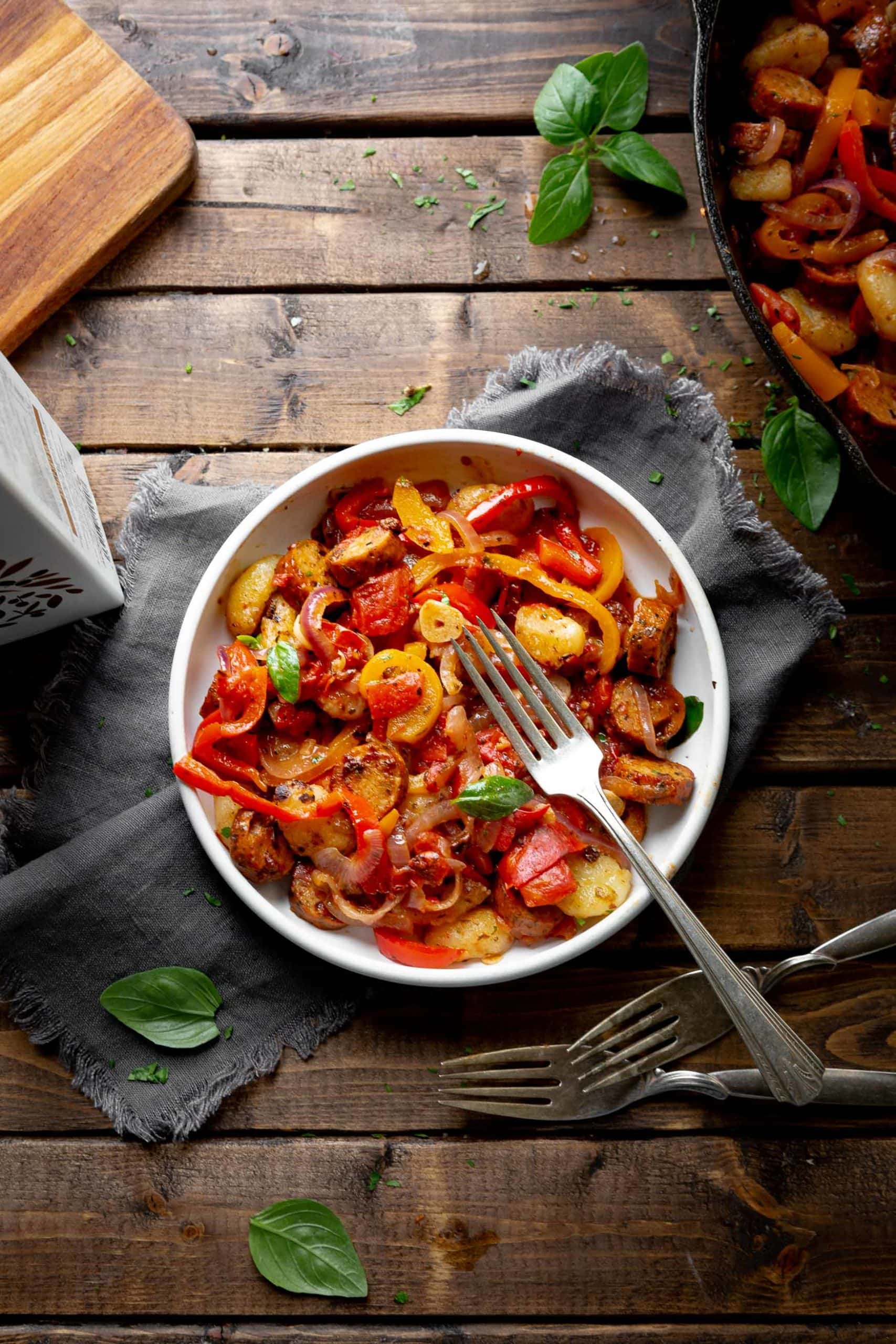 Ingredients for Sausage and Peppers Gnocchi

There are really only a few ingredients in this dish which is one of the things I love about it! And aside from the fresh produce and gnocchi, most of the ingredients are things I usually have on hand already. That’s always a win!

The measurements of each ingredient can be found in the recipe card below. 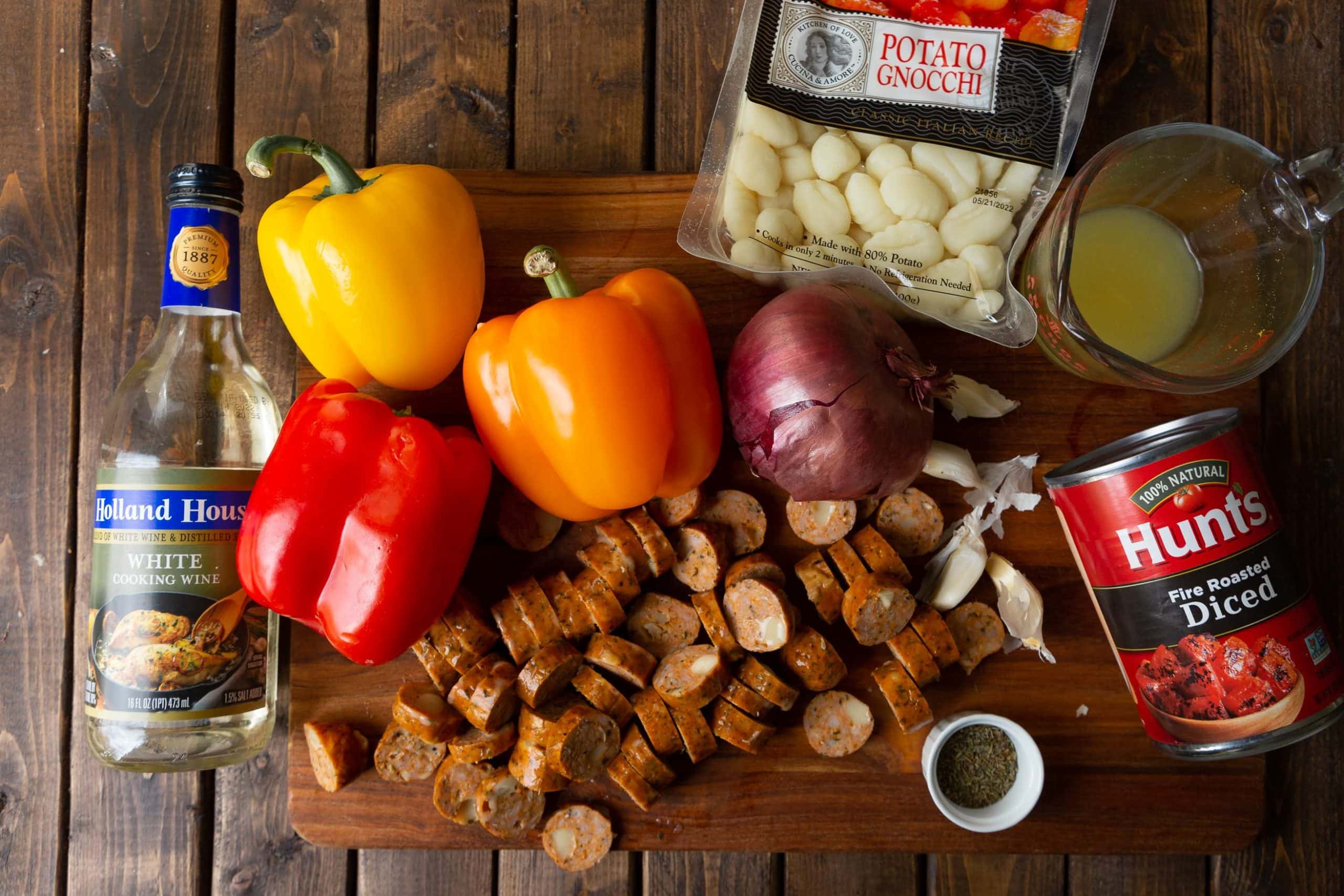 How to Make Sausage and Peppers and Gnocchi

All of these instructions in full detail can be found in the recipe card at the end of this post. 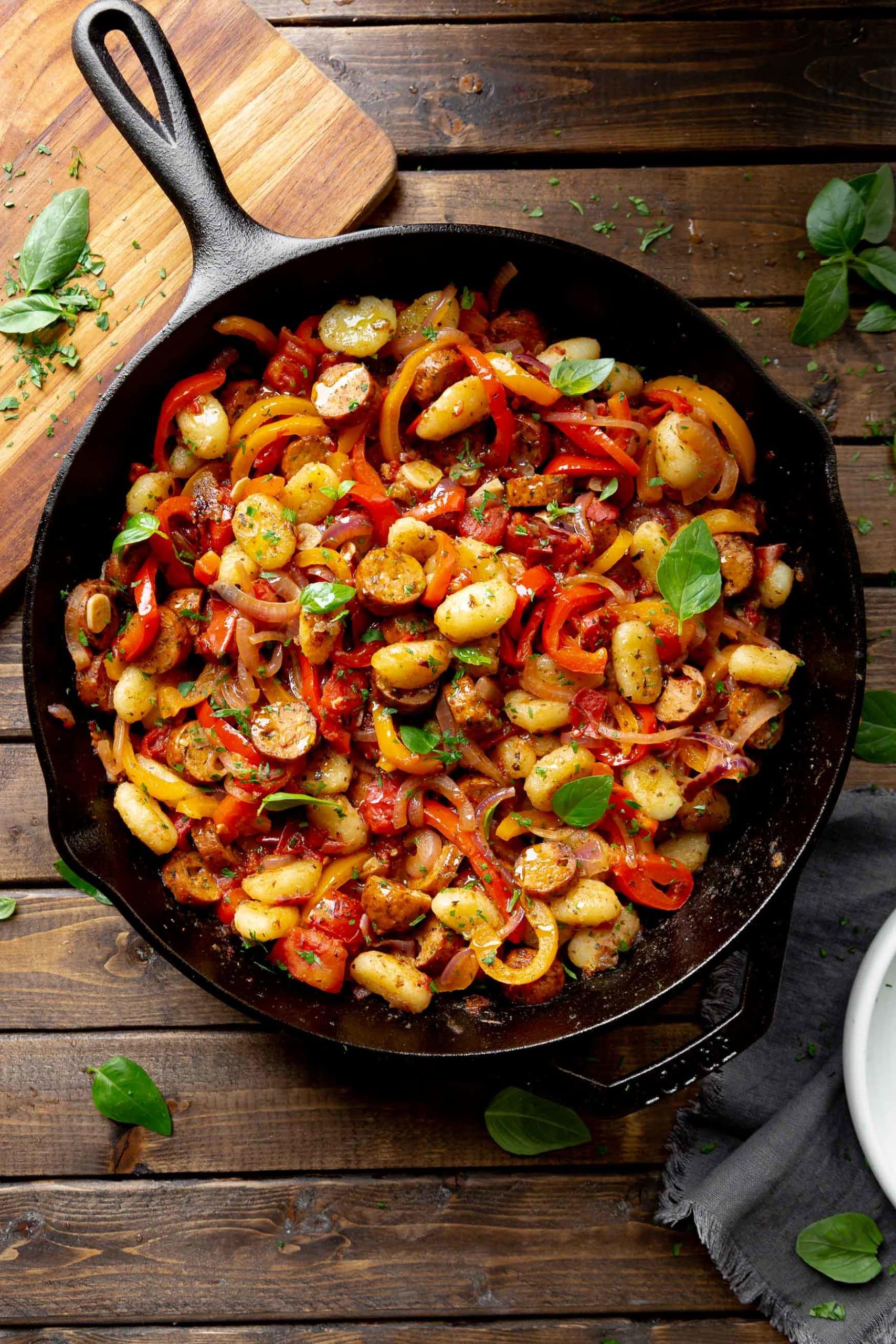 How to Know When Gnocchi are Done

When you add gnocchi to a boiling pot of water, it will sink to the bottom. They are done when they float to the top!

Which Sausages to Buy

You can buy any ol’ sausage you want! You could lighten it up with a turkey or chicken sausage or go with a classic pork sausage. Whatever your family will enjoy most! 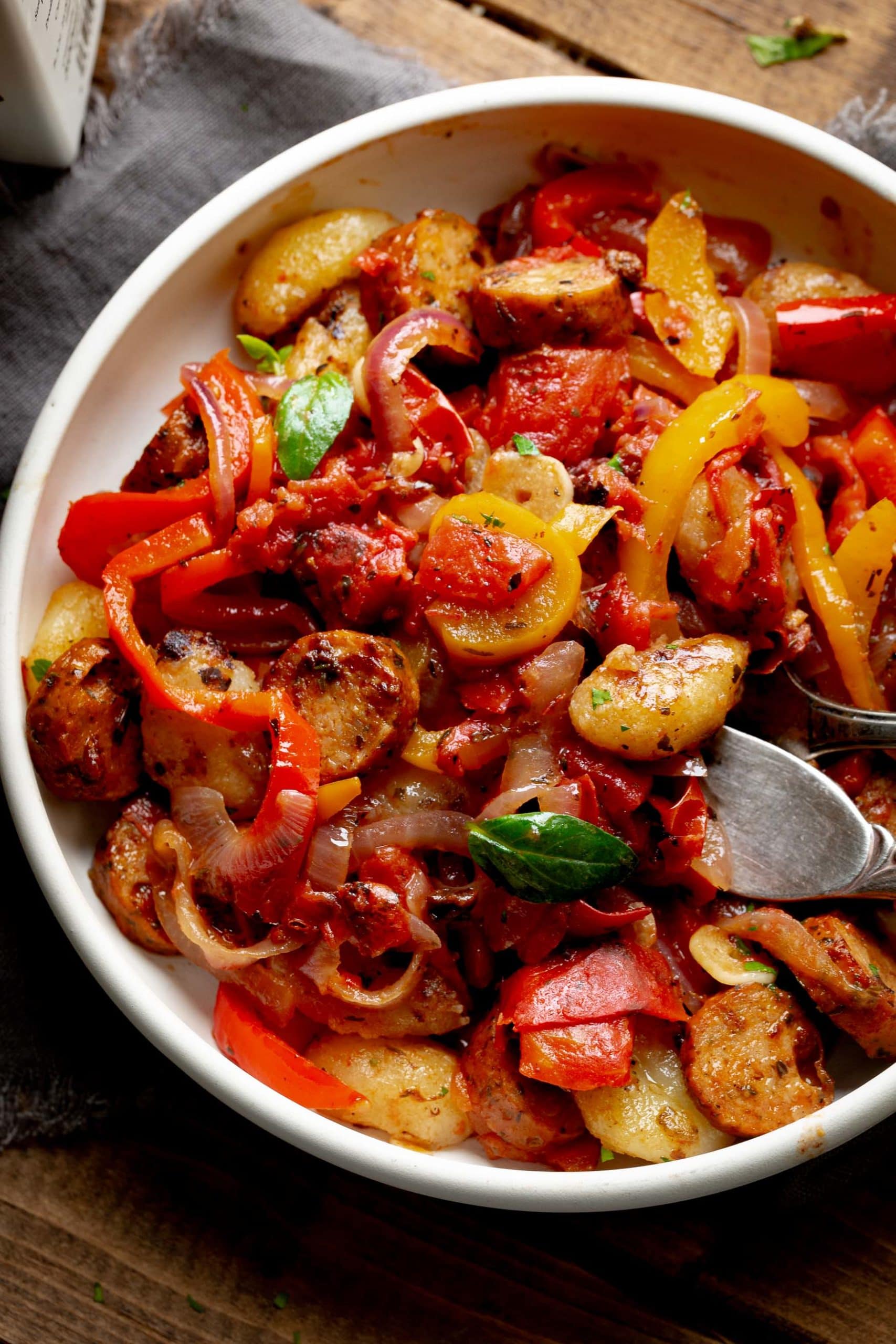 Can I Use Green or Yellow Peppers?

Yes, you can use whatever bell peppers you like best. I just like the way red and orange look in this dish. Keep in mind that green bell peppers tend to be much less sweet than the red, orange and yellow.

Can I Add More or Less Garlic?

The amount of garlic is definitely up to you and your preferred taste. I know everyone tastes and enjoys garlic differently.

Can I Use Fresh Herbs?

Uncooked gnocchi freezes really well, but once gnocchi is cooked, I wouldn’t recommend freezing it. They get too soft and lose their shape after they are cooked to freeze successfully.

It’s time for sausage and peppers and crispy golden gnocchi! The next time you need dinner in a hurry, try this 20 minute meal! The flavors are super-cali-fragi-listic-expi-ali-scrumptious! 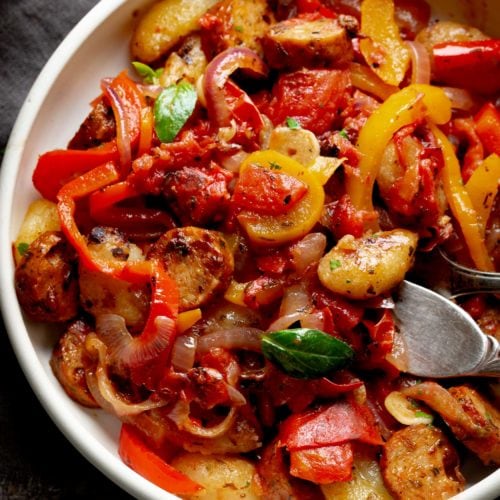