Every Easter our family makes these sweet empty tomb rolls (aka resurrection rolls) where the marshmallow melts down to a caramel sauce inside the roll. This is one of our all-time favorite Easter recipes! 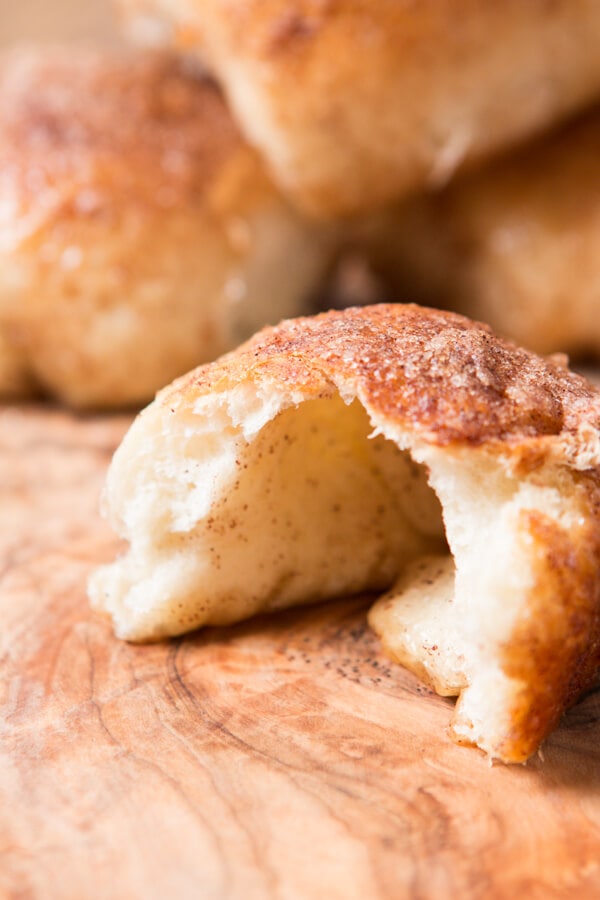 What Are Resurrection Rolls?

I don’t know if these are really something that should be eaten for breakfast, they probably aren’t really for dinner either, but that’s when we enjoy these empty tomb rolls every Easter. In fact, they probably should be a dessert but our kids love them either way and the meaning is just as important as the taste.

The empty tomb rolls are meant to symbolize Christ not being found in the tomb after he was resurrected, but if you aren’t religious it doesn’t really matter because you still get to eat a yummy roll! 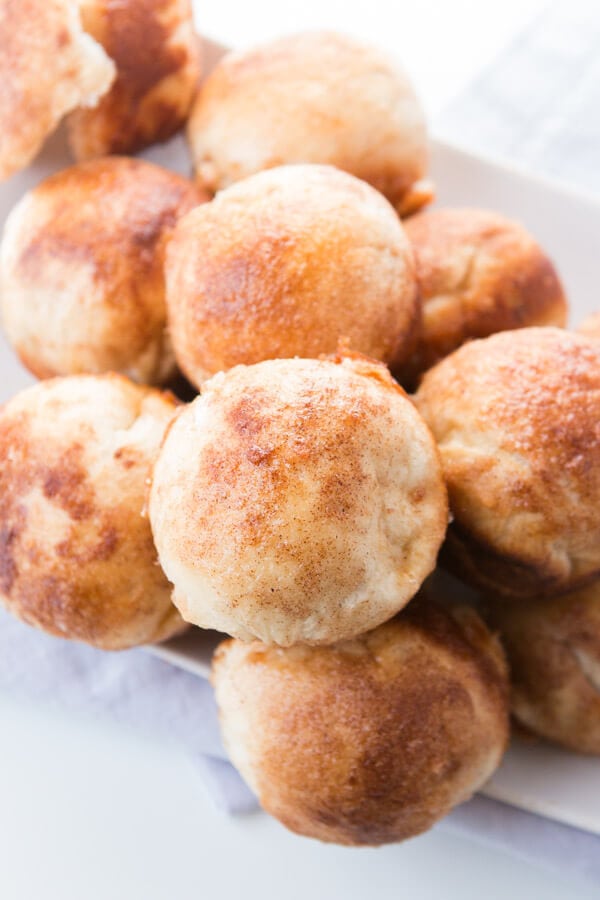 Our Story of Faith While Preparing for Another Baby

Heads up, I’m about to get personal so feel free to keep scrolling if you just want the recipe.

We had a special little conversation while making these resurrection  rolls. You see, I’ve been incredibly ill with Hyperemesis Gravidarum with all three of my pregnancies. It’s one of the hardest things I’ve endured in my 30 some odd years of life, but it’s obviously been incredibly rewarding too.

Our oldest daughter witnessed so much this last pregnancy that she was able to grasp what was happening a little more than before. She asked me yesterday why I had been willing to be pregnant a third time knowing that it would be so horrible and I jumped at the opportunity to tell her.

Have you ever felt this stirring inside of you and you know you are meant to do something? Or had that odd feeling that someone is missing? It may be that you felt this great pull and desire to start your own business, be a teacher, have children, or anything else you can dream up, and all you can say is that you just knew you were meant to do it? We — I especially — have had both feelings each time we’ve had a baby. Every. Single. Time. 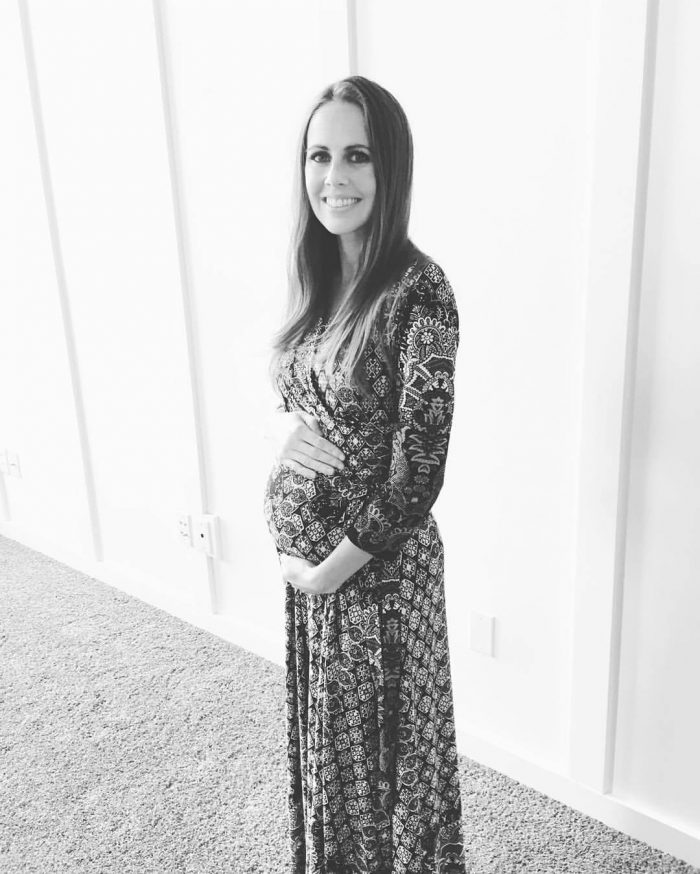 It took us five years to put on our brave pants and try for another baby. We had felt strongly that there was another who was meant to be in our family, but we thought it would probably be through adoption or foster care. We continuously prayed and sought medical advice in the meantime but just never felt the time was right, which to be honest, after a few years had created quite the hole in our hearts as we yearned to have a third but were afraid of the dangers it carried with it.

At one point, we knew it was time. We just felt it and there is literally no other way to explain it. It would take great sacrifice so this was not a selfish desire, instead it was a humbling experience to have the opportunity to consider another baby.

To say that we were nervous, scared, and everything else you could think of about getting pregnant and going through Hyperemesis again is an understatement. One night we decided that no matter what, we didn’t want to ever look back with regret that we didn’t listen to what we were feeling so we knelt in prayer and asked that we be given the faith needed to move forward, leave our adoption papers as is, and proceed with a pregnancy of our own if it was the right choice. It took all the faith that I had to say those words out loud.

As the words rushed out of my mouth I felt a great desire to just sit and listen and as we did just that our hearts were filled with the most amazing peace I’ve ever felt. Cade and I both looked at each other and just cried. One of those cries that says everything your lips cannot utter. Faith welled up in us both and I know this all sounds like some big amazing story but I knew without a shadow of doubt that we were meant to have one more, that I would be cared for and survive as would the baby and that our faith would in fact sustain us. 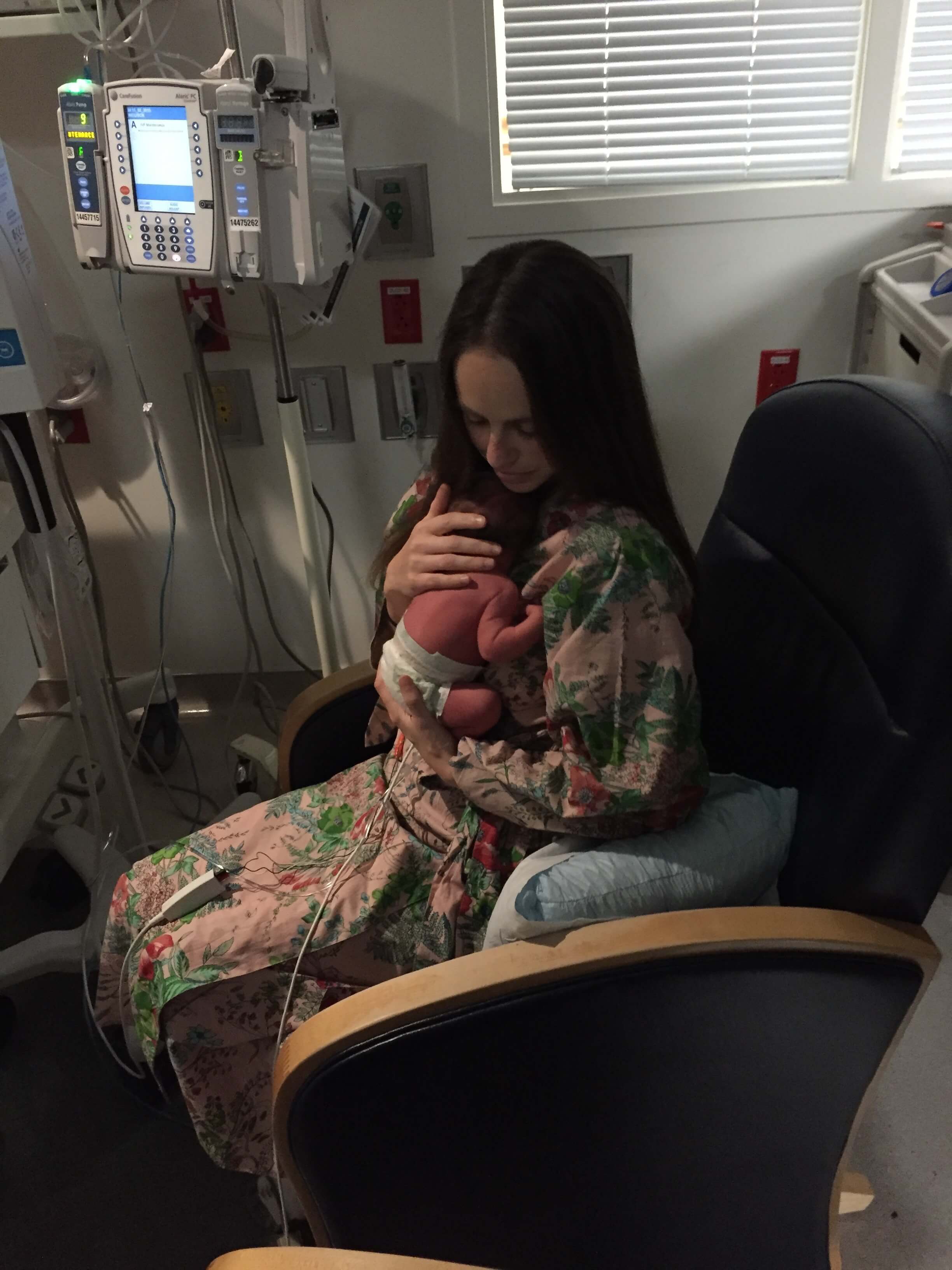 That’s what I told her, that we had faith in the answer we’d been given. We prepared with a wonderful doctor and nurses for everything we could so that my body was ready to be so sick. We went every week while I was pregnant, which was an enormous sacrifice for someone who couldn’t make it more than a few hours without throwing up. And in the end, we had a healthy little boy who I wish you all could know. He’s a gift and he is our missing puzzle piece.

The Prince of Peace is a new Easter initiative that we’ve felt so inspired about so thank you for letting us share our experience of using faith in our lives. I don’t know why I needed to share this, and I hope you all know that we completely respect differences of opinions and beliefs, but this is in fact our story and as Easter approaches and the new Prince of Peace initiative takes place I had to tell my story of how faith was given, and my faith increased all because of him. If you feel up for it, we would love to hear your stories as well.

Now, let’s get back to those resurrection rolls. 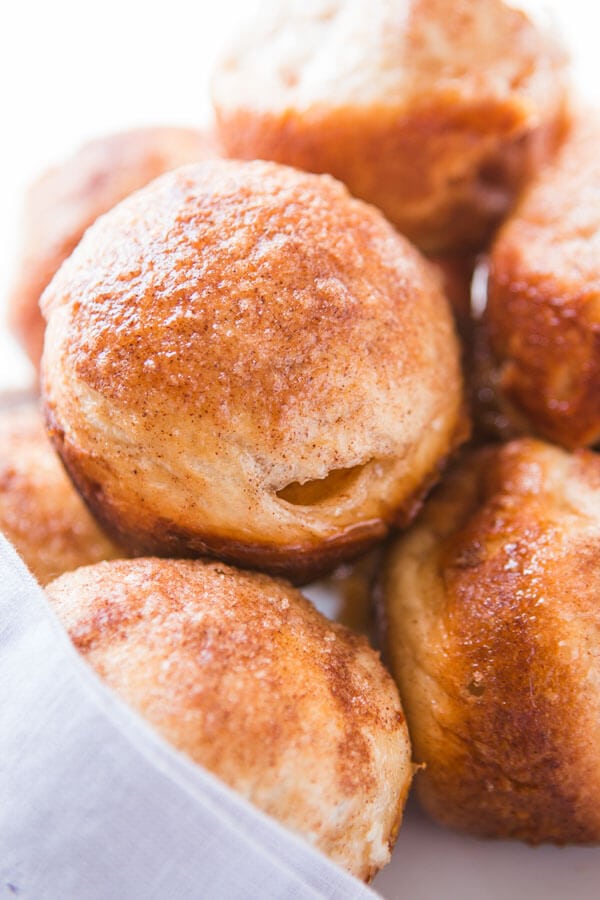 To make the empty tomb rolls, all you’ll need is:

How to Make Resurrection Rolls

Start out with your favorite homemade roll dough, crescent rolls, Rhodes frozen rolls, whatever you like. Yes, I shortcut these all the time. In fact, I like to get the dough in balls into the fridge the day before so they can defrost if frozen.

Let the empty tomb rolls rest for 15 minutes and then bake at 350ºF. When you open the rolls the marshmallow will have melted down into a caramel like sauce that you can barely see.

You can now talk to the kiddos about the resurrection and how Christ’s body wasn’t there, but that just like how the rolls have become sweet so is death sweet because all of us can live again because He Is Risen. In fact, I like to just barely under bake them so a little marshmallow is remaining and talk about the white burial clothing that remained in the tomb. Plus, extra marshmallow is AWESOME! 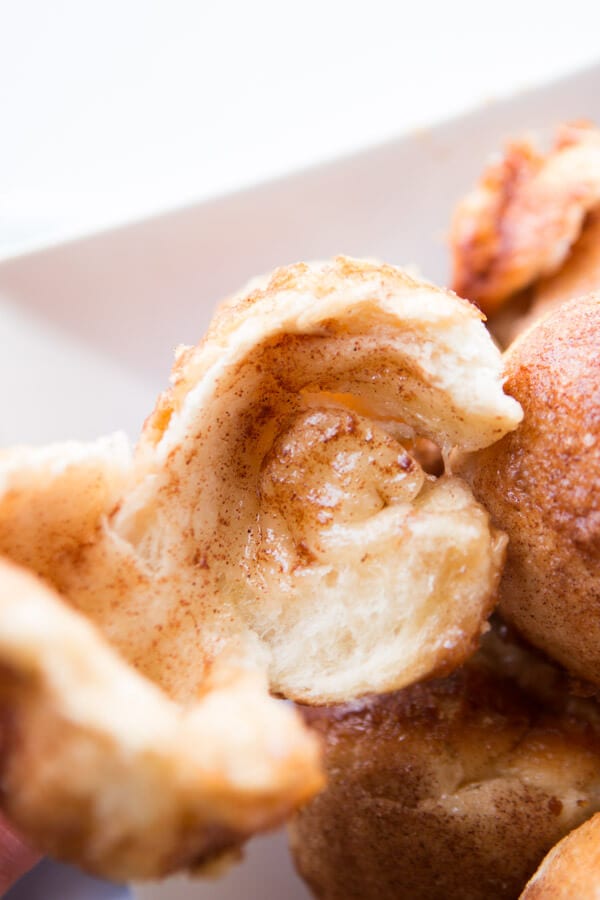 How to Explain Resurrection rolls

These empty tomb rolls (or resurrection rolls) are meant to made along with the story of Christ’s body being wrapped in the white clothing, the butter represents the oils they anointed him with as well as the cinnamon sugar for the spices and herbs, then he is placed in the tomb, and finally resurrected on the third day.

When you tell the story, make sure you get to the part where he is not found in the tomb and open up your rolls at the same time. Kids and adults love it!

Can I Prep Resurrections Roll in Advance?

Yes, you can prep the rolls the night before, pop them into the refrigerator, and then bake them off the next day. Just be sure to let them come to room temperature before baking them (set them on the counter for 30ish minutes, then bake). 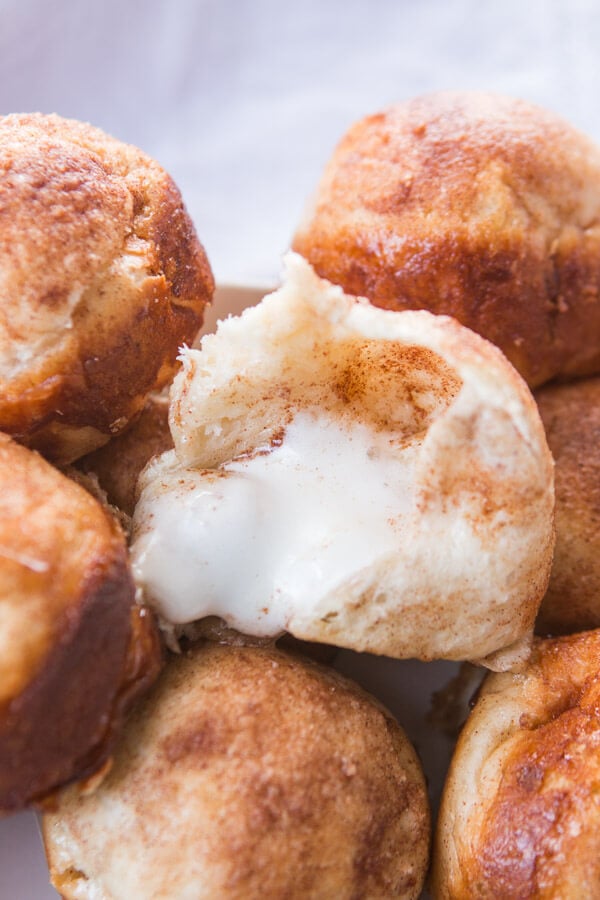 If making the dough from scratch, you’ll want to section it off into golf ball-sized pieces to make the resurrection rolls. That’s roughly how large the Rhodes rolls are, so I’m thinking that should work when making empty tomb rolls from scratch!

Note that these resurrection rolls are best fresh from the oven, but leftovers are tasty too!

More of our FAVORITE EASTER RECIPES:

4.51 from 55 votes
Prep Time: 10 minutes
Cook Time: 15 minutes
Total Time: 25 minutes
Servings: 12
Save Recipe Print Recipe
Every Easter our family makes these sweet empty tomb rolls (aka resurrection rolls) where the marshmallow melts down to a caramel sauce inside the roll. This is one of our all-time favorite Easter recipes!