No Bake Pumpkin Pie is your answer for a simple, no fuss, always flawless pumpkin pie for Thanksgiving! It fulfills those pumpkin pie cravings without the hassle of baking and making a pie crust. 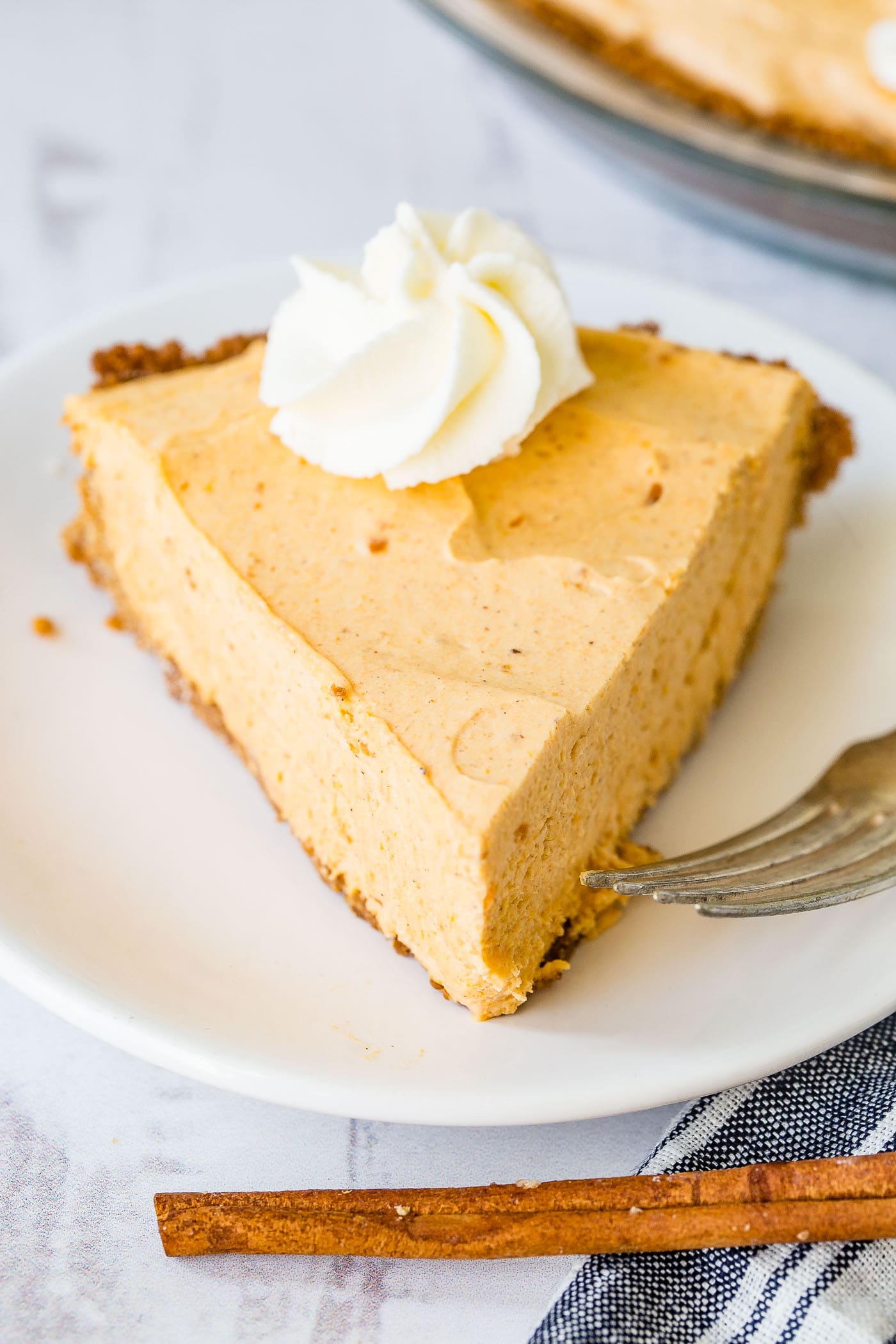 I actually love pumpkin pie and don’t feel like it’s Thanksgiving without it, but our pumpkin cheesecake bars with gingersnap crust are starting to take over the world. Which they should, they are the best things ever.

But we have lots of readers writing in that they want more no bake options.

We have this dreamy no bake pumpkin pie that I looooove, but it’s really hard to find that pumpkin instant pudding. We only find it at Walmart and have to buy the whole shelf every year. So this recipe uses real pumpkin and pumpkin pie spice, no instant pudding mix needed.

A pumpkin marshmallow no bake was next on the list for those who are nervous about making a traditional pumpkin pie but still want homemade. 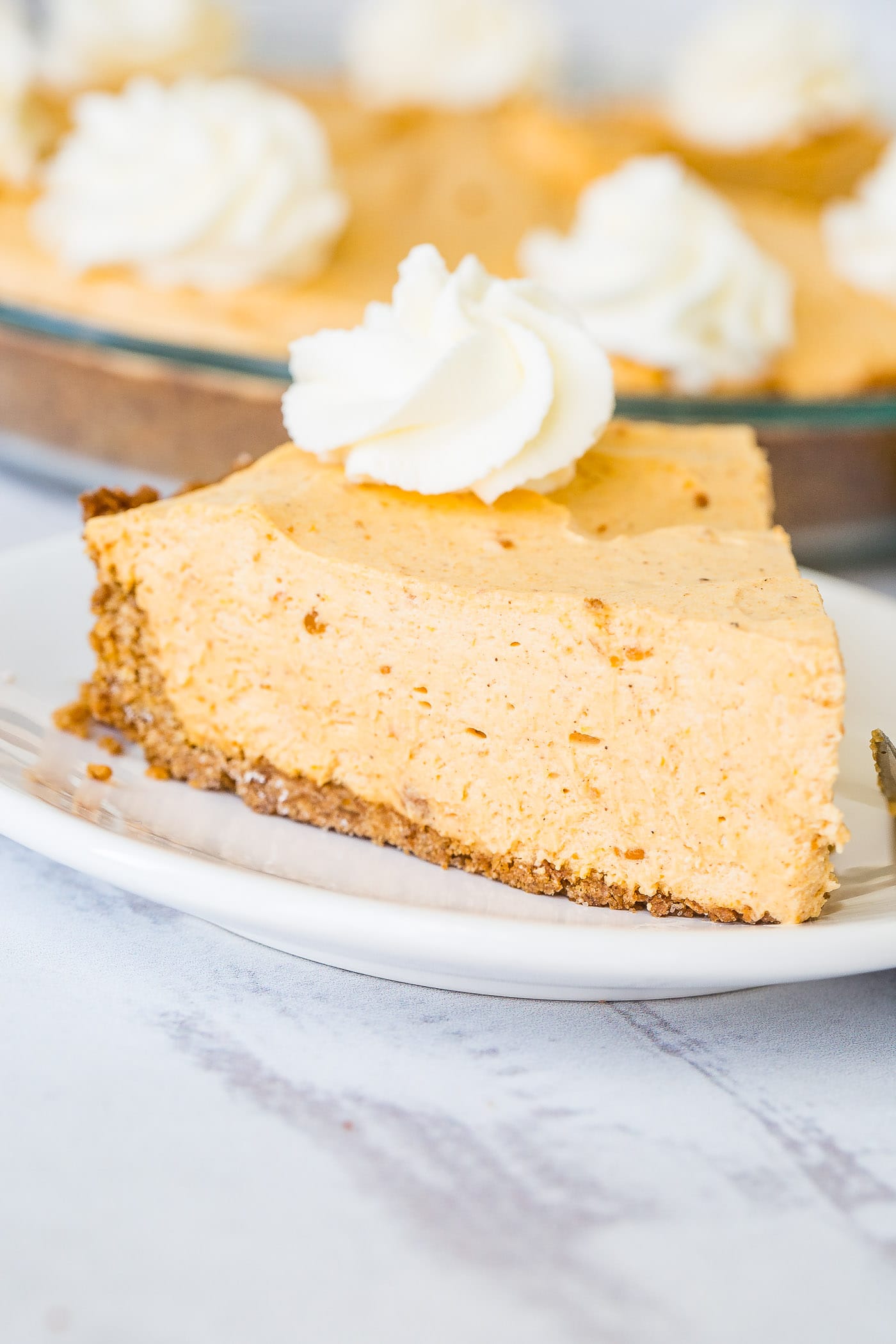 How to Make No Bake Pumpkin Pie?

Mix all of the ingredients together until it feels like wet sand and then press the mixture into a pie pan. Press it into the bottom and up the sides of the pan. Bake it at 350 degrees for 8-10 minutes and then set it aside to cool completely. 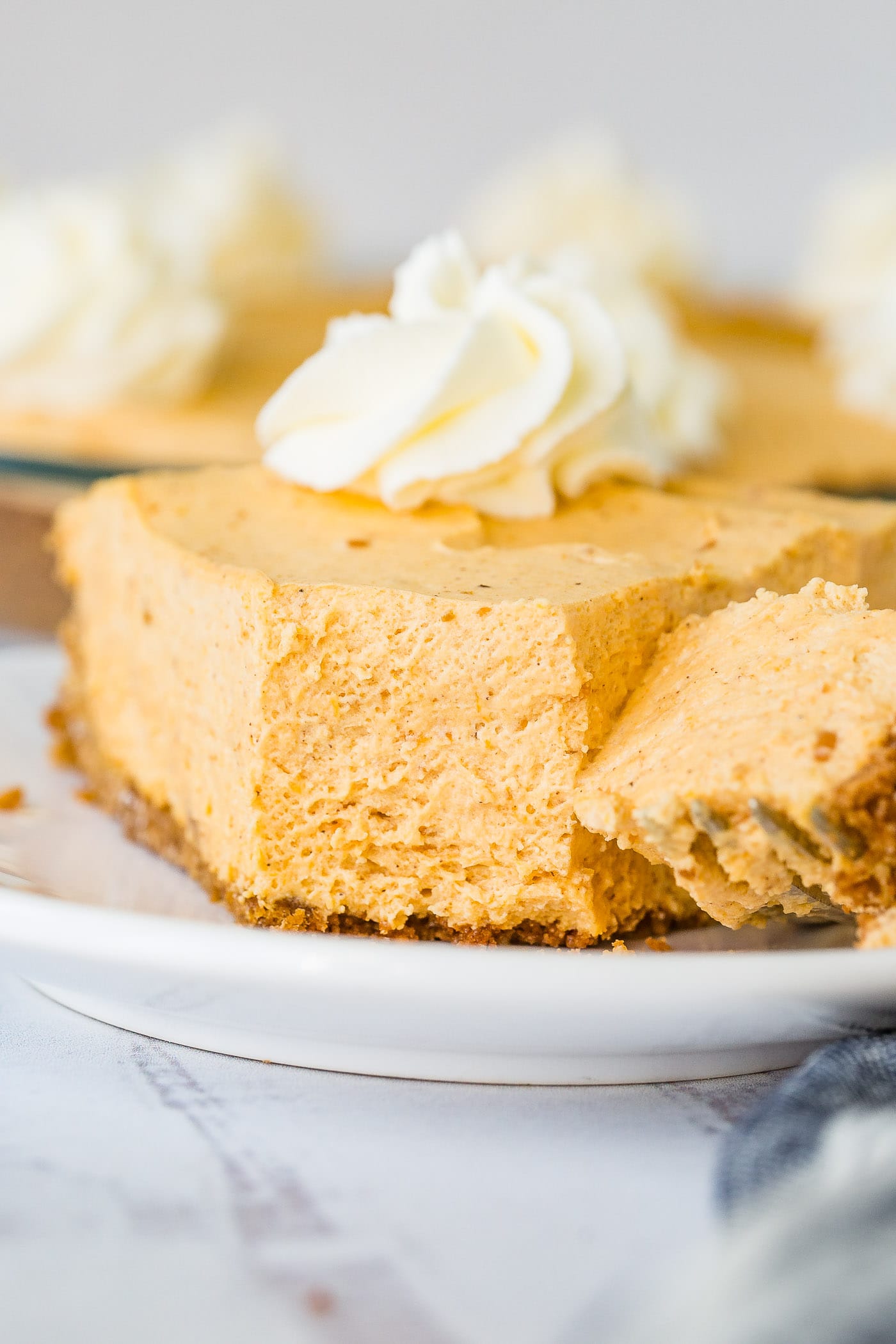 The filling for this pie comes together in two steps and just 5 ingredients. The first step is to combine the pumpkin puree (not pumpkin pie filling), cinnamon, marshmallows, and pumpkin pie spice in a sauce pan over medium-low heat. Stir everything together until the marshmallows are completely melted. Then cool the mixture in the refrigerator until it is completely cool which will take 30-60 minutes.

What is Pumpkin Pie Spice?

Pumpkin pie spice is a blend of warm spices commonly used for baking anything pumpkin. It is usually made of cinnamon, ginger, nutmeg, and allspice. If you can’t find the actual blend at the store or don’t have it on hand, you can totally make your own. This is a great pumpkin pie spice recipe. 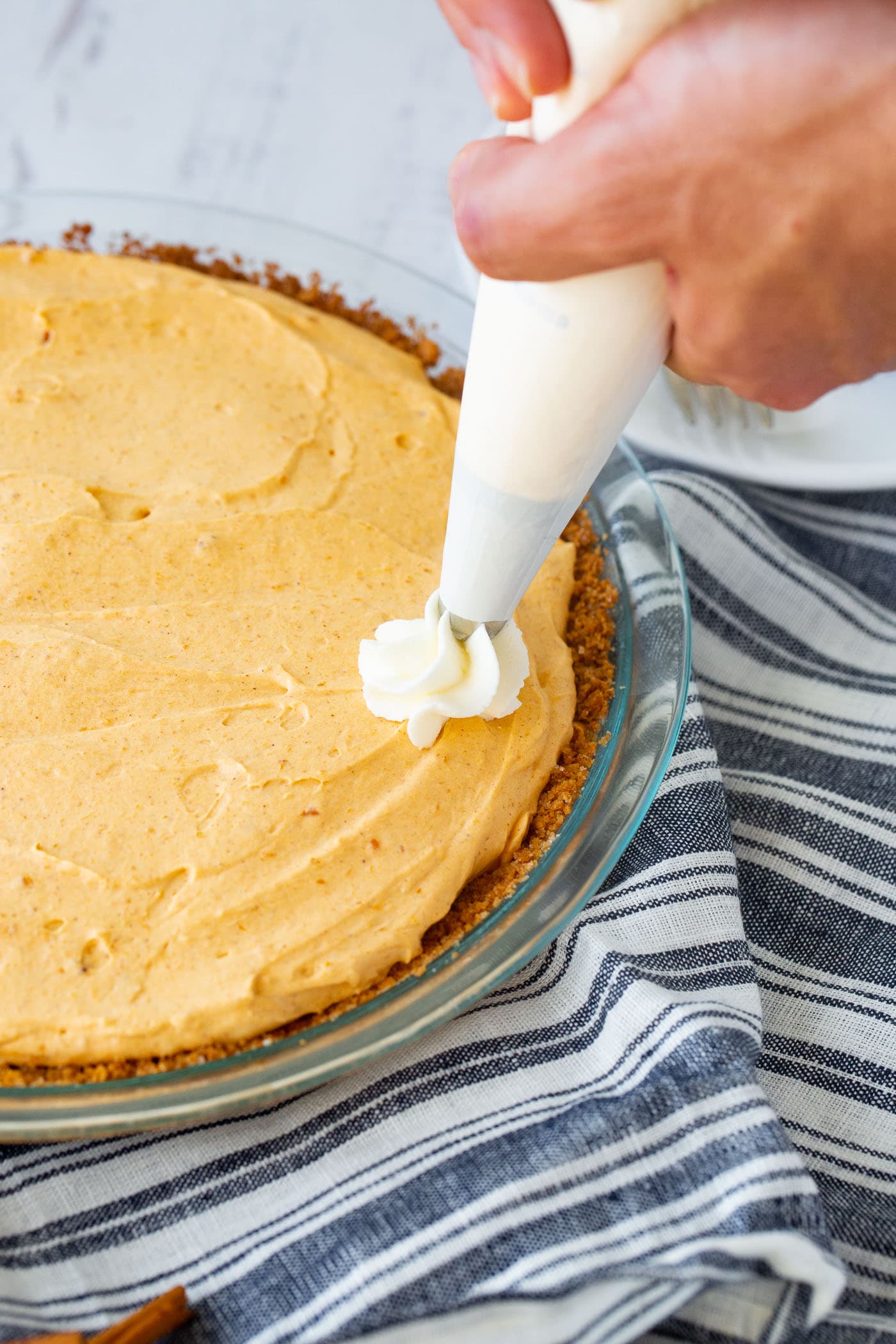 Do You Have To Bake Graham Cracker Crust?

I have found that baking a graham cracker crust results in the best end product. If the crust isn’t baked, it ends up being quite crumbly and doesn’t hold together very well. If you absolutely don’t want to do any baking, you could put the crust into the refrigerator for a couple of hours to help the graham cracker mixture get firm.

Is Half and Half the Same as Heavy Cream?

No, half and half is equal parts heavy cream and milk. Half and half has significantly less fat, and it will not whip into soft peaks like heavy cream will. While both are delicious, heavy cream is what you need for this recipe.

Can You Freeze Graham Cracker Crust?

A prepared graham cracker crust can be frozen for up to 3 months. They hold up extremely well. Allow the baked crust to cool completely and then store it in the pie pan. It should be wrapped in plastic wrap and then in a large ziplock bag. 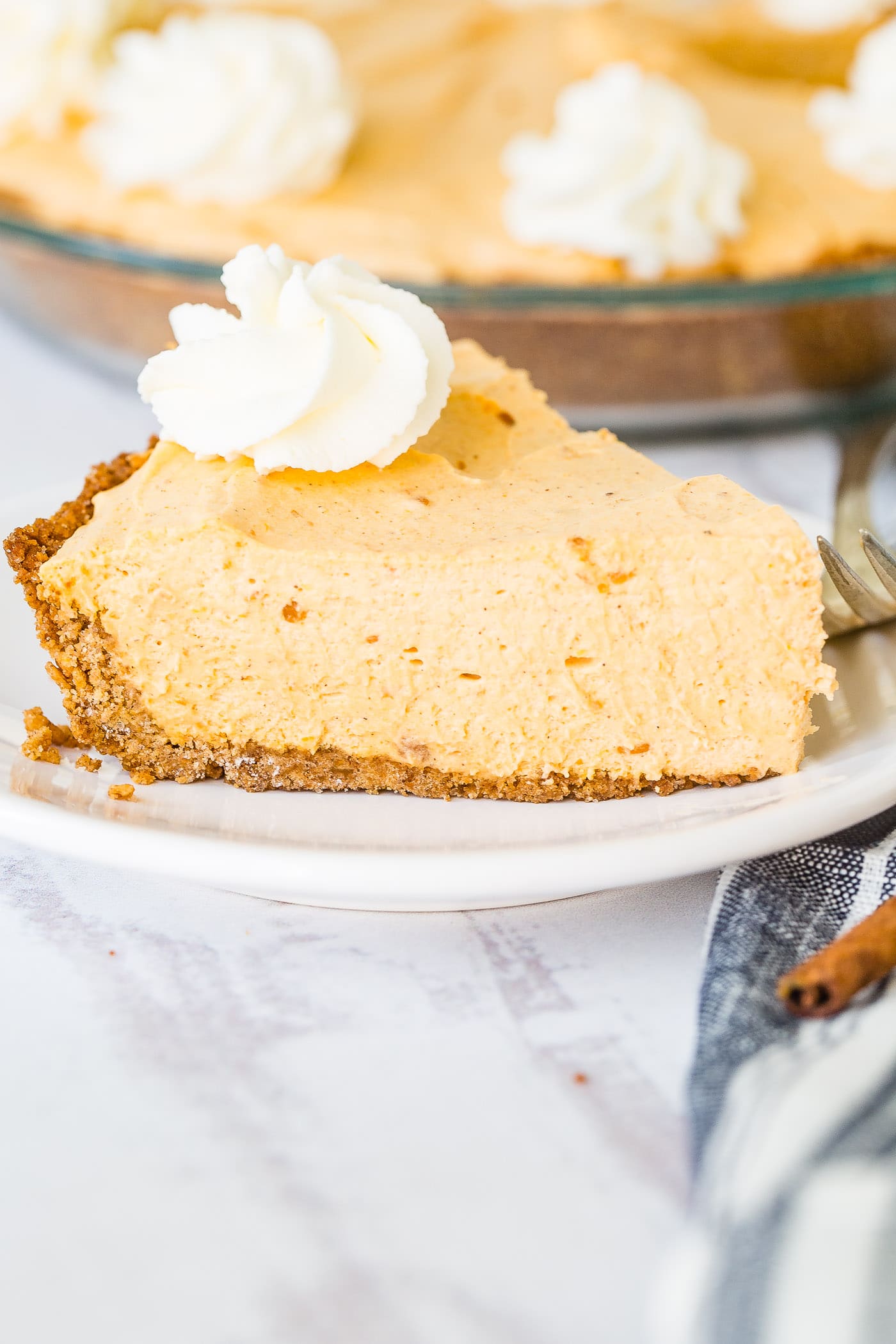 Does Pumpkin Pie Need to be Refrigerated?

This no bake pumpkin pie should be refrigerated after serving. Because of the dairy in the pie, leaving it at room temperature for too long will make it ripe for harmful bacteria. If I have leftovers after serving, I wrap it in plastic wrap and stick it in the fridge immediately.

How Long Will Pumpkin Pie Keep?

If you’re short on oven space or just terrified of making a tradition pumpkin pie (which you shouldn’t be, you got this!), this no bake pumpkin pie will impress your Thanksgiving guests and meet all your pumpkin pie needs! 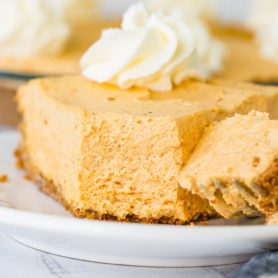