This is one of our most popular pie recipes and it’s an easy pie recipe! Who wants a slice of No-Bake Oreo Pie with chocolate graham cracker crust?! 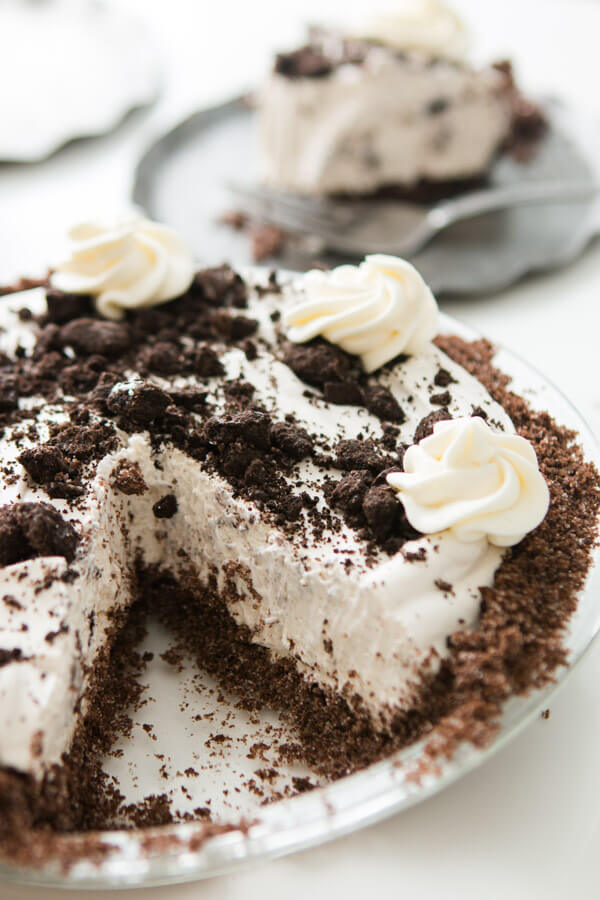 I’ve never really been that concerned with making cream pies, but then we had a dang good banana cream pie with dulce de leche and we have literally become obsessed with making new versions. Have you made that pie yet? You guys, it is probably my favorite pie ever. Well, and the Dutch Apple Pie. That’s a really good one too. Oh, and that no bake pumpkin pie. That is such a good one!!!

I’m going to link up to all of our no bake pies after the recipe, so just scroll on down to check them all out.

The issue with a no-bake Oreo cream pie, in my humble opinion, is that it’s too much emphasis on the cream center of the Oreo instead of the chocolate cookie part. We really wanted balance so we started with the crust when we started on this no-bake Oreo cookie pie with chocolate graham cracker crust.

Many Oreo pies are made with an actual Oreo crust, but that creme center took away from the chocolate a little so we ditched that and went back to the original no bake crust: a graham cracker pie crust. Only this time we bought chocolate graham crackers and this easy Oreo pie turned out AWESOME!! 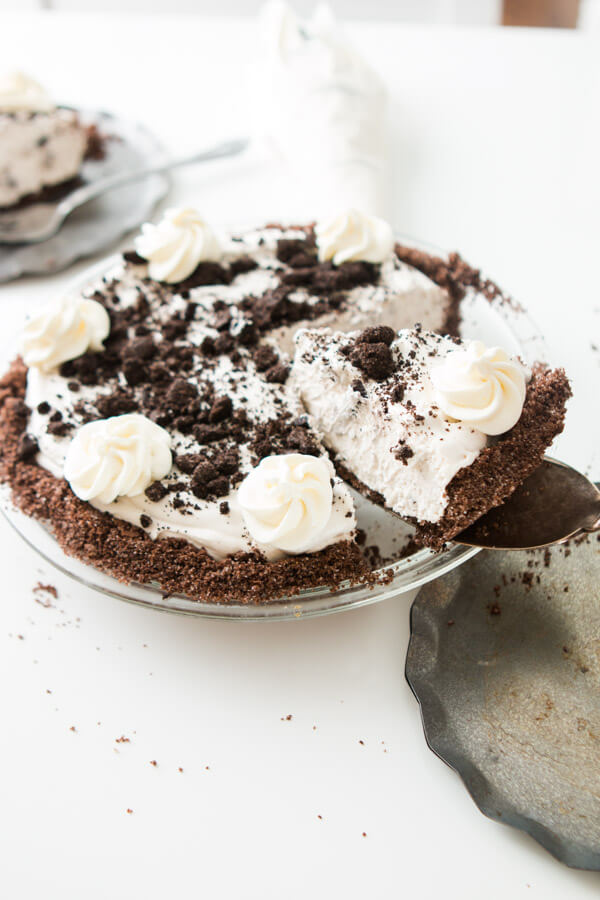 What’s in an Oreo Pie?

This Oreo pudding pie couldn’t be simpler to make. Even better, it calls for just a handful of ingredients! Here’s what you’ll need to make the Oreo cookie pie: 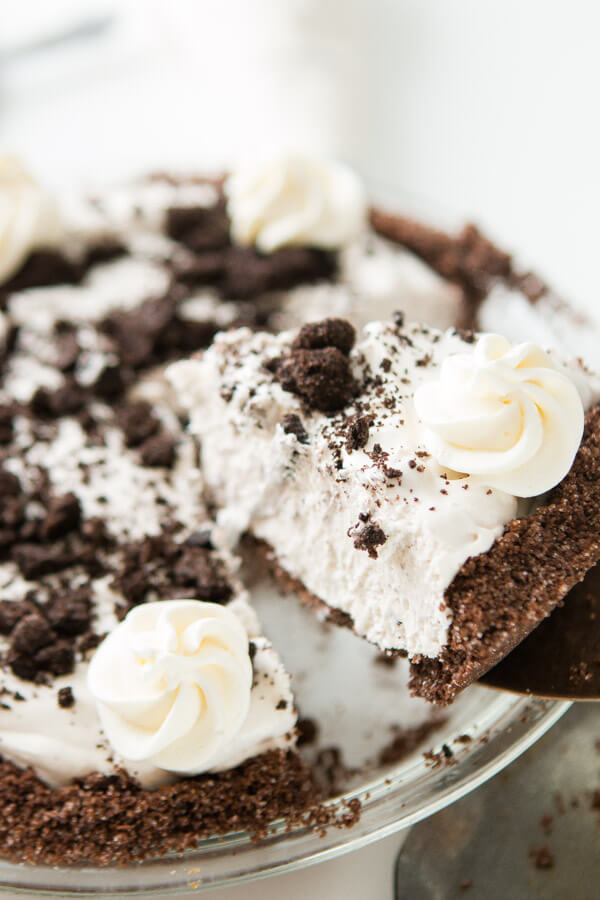 How to Make No-Bake Oreo Pie

Make the no-bake graham cracker crust: Crush chocolate graham crackers in a blender or with a rolling pin in a Ziploc bag. These are a little more sugary so you don’t have to add as much sugar but still add the melted butter to get everything to stick together. You can bake the crust for a little more crunch or stick it in the fridge to solidify.

Make the filling: First we beat the cream cheese until soft and then beat in the sweetened condensed milk. In another bowl, we added the instant Oreo pudding. In a stroke of genius, instead of adding pure milk we did 1 part chocolate milk to 2 parts milk. That little bit of chocolate really helps to balance the entire pie out. Mix the pudding and cream cheese, and fold in the whipped cream.

Chill the pie: Place the whole thing in the fridge for about an hour, or you really can serve immediately if you must though it wont be as set up as it could be. To finish it off, sprinkle crushed Oreos all over the top and eat up! 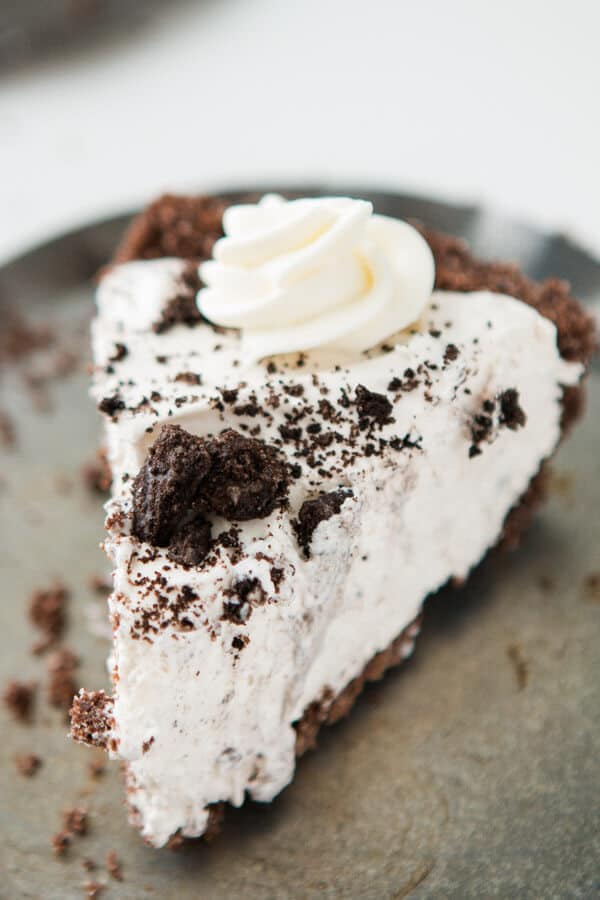 Does the Graham Cracker Crust Need to be Baked?

As far as baking a chocolate graham cracker crust before filling it with a cream filling, that is a matter of preference. Either chill the pie shell to set the crust so that it is firm, or bake the crust for 6 to 9 minutes at 375 degrees F. In a chilled crust, the butter becomes hard to hold the crust.

How Long Will an Oreo Cream Pie Last?

This no-bake Oreo pie will last 2-4 days in the refrigerator. Loosely cover the pie with plastic wrap or foil and refrigerate. 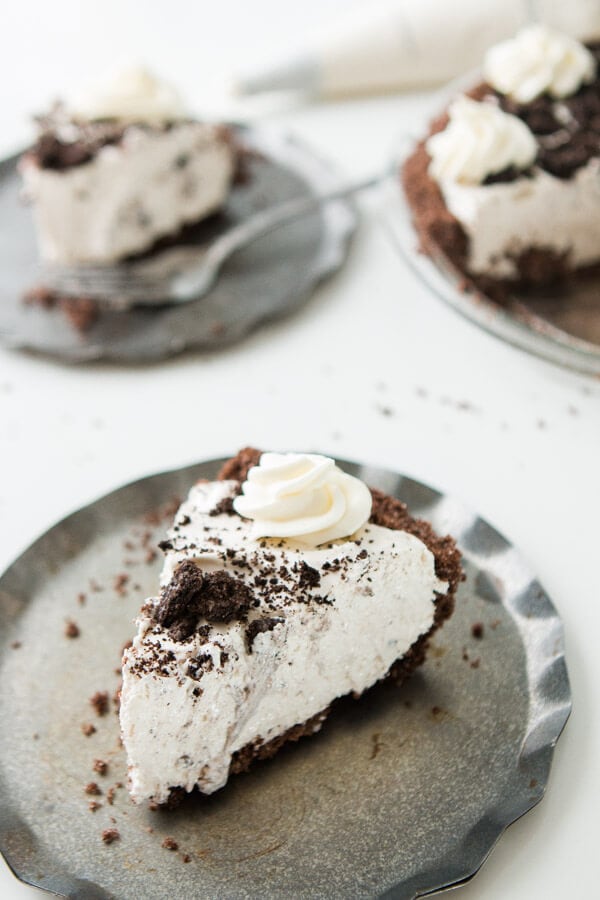 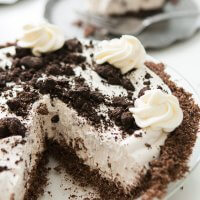