Every summer we enjoy plenty of grilled sweet corn, but this Elote Grilled Mexican Corn Salad is above and beyond with it’s crema sauce, salty cotija cheese and that spicy seasoning! 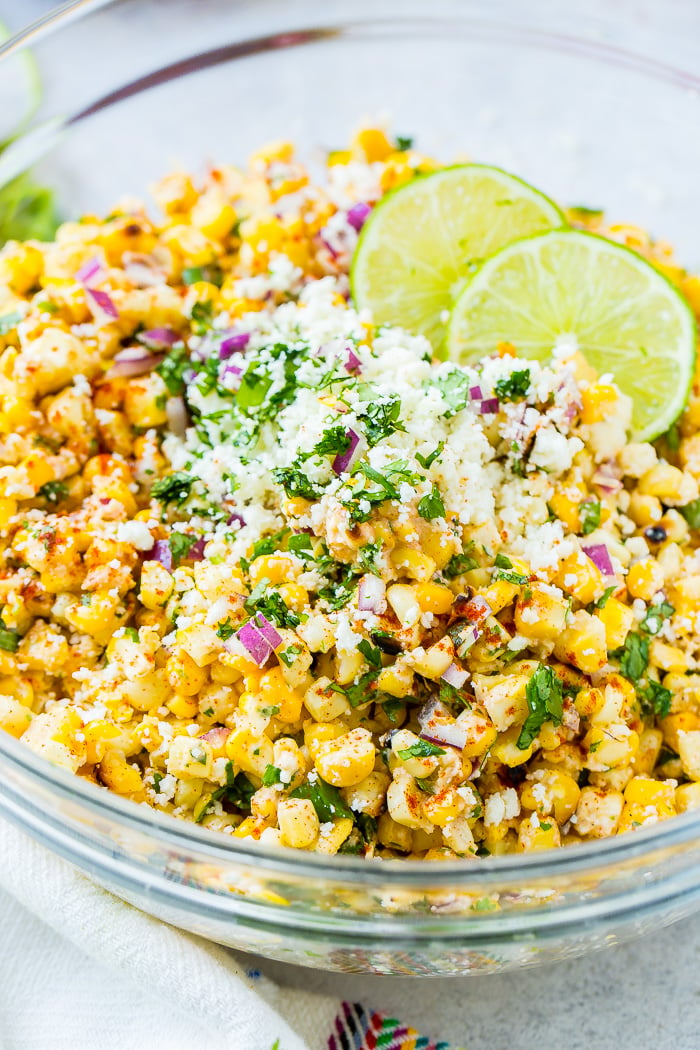 Our post on the Secret to the Best Grilled Corn on the Cob has been going absolutely nuts this summer, so if you haven’t made it yet I really hope you will. This Elote Grilled Mexican Corn Salad should also be on your list. It’s juicy grilled corn that’s been cut off of the cob and tossed with Mexican Crema, spices and crumbled cotija cheese along with fresh lime juice and cilantro. Good mercy it’s good!! Don’t worry, I’m going to explain all of those ingredients, read on!

Where to Find Elote

Every summer Cade and I visit Rexburg, Idaho. My parents have relocated there where they enjoy a home that fits our big family’s needs, an incredible, huge yard and just as big garden. It is so peaceful to head to Idaho and spend time with my parents. If we time it right, we get to enjoy a small farmers’ market where the food trucks also gather, including one for Elote.

We’ve discovered that many farmers’ markets around the country also bring in Elote, or Mexican Corn. Look one up by you, or you can make our’s at home, Mexican Street Corn – Elote. But first, Elote Grilled Mexican Corn Salad!! 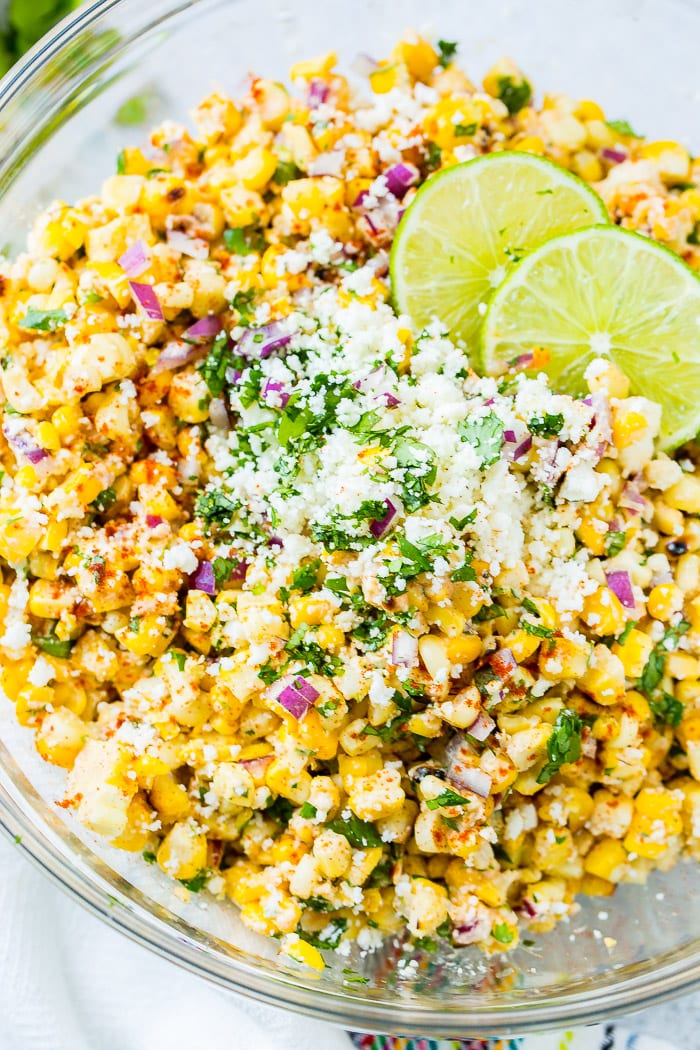 What is Elote Corn?

Elote is a Mexican Corn on the Cob that you are totally missing out on if you haven’t tried it yet.  It’s usually a corn on a cob that’s served on a stick so that it’s easier to eat. It’s a corn on the cob that’s been kicked up a notch with a dressing or spread, spices and cheese. Elote corn is considered a snack or occasionally a side dish.

Let’s go over the basic questions before we move on.

What cheese should you use for Elote Mexican Grilled corn? Oh boy, this is a tricky question because to be honest, even if there’s one that’s usually used, Chihuahua cheese or Cotija Cheese, not everywhere sells it. We most often use Cotija cheese because  it’s available in all Utah stores, but if you can’t find either we recommend parmesan cheese in the can or fresh parmesan, or even a mild Feta.

Elote Mexican Corn is usually coated in crema, sour cream, mayonnaise or butter. It’s all personal preference or whatever the vendor has chosen to do. Often a mixture of sour cream and mayonnaise is used instead of just one or the other. Whichever you try will

Elote tastes like really buttery grilled corn with a dash of spice from the chili powder and that creamy, salty cheese. It’s literally a mouthwatering corn on the cob.

Elote comes mostly from Northeastern Mexico, but corn itself has come from many places like Honduras etc. 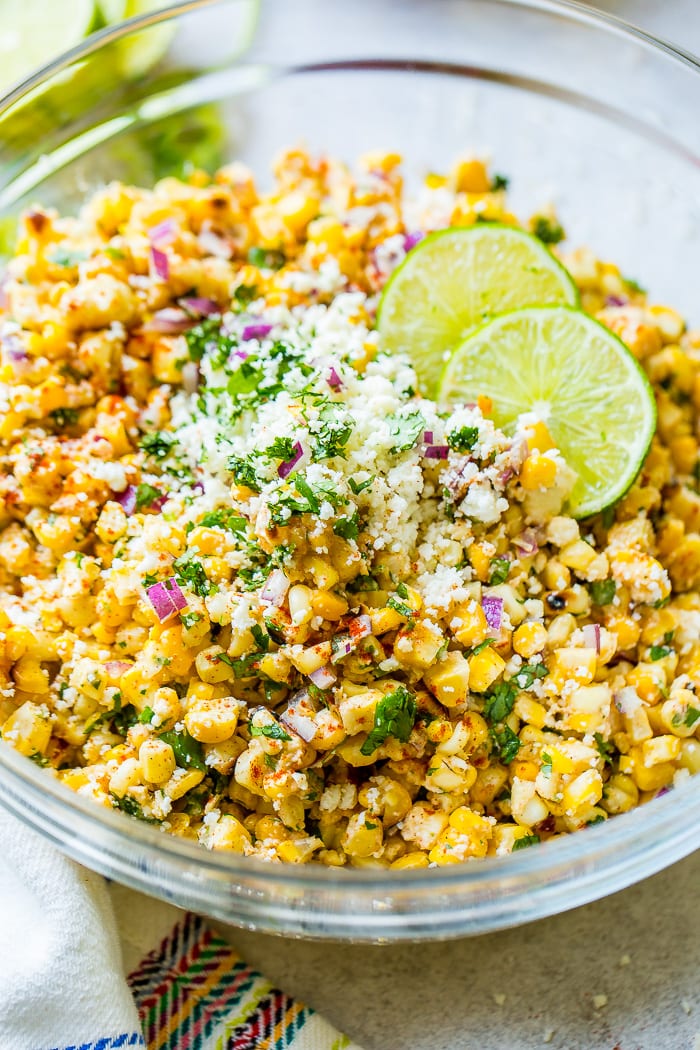 Elote Mexican Grilled Corn Salad is an easy to eat version of Mexican Street Corn. You’ll make it just the same, but add some red onion, cilantro, lime juice and toss it all together in a bowl instead of eating it on the cob. Elote Grilled Mexican Corn Salad is a great salad to take to a potluck or bbq.

What is Mexican Crema?

Alright, now what is Mexican Crema?

Crema is the Mexican version of French crème fraîche, a little bit tangy and creamy. Both Crema and Creme Fraiche are slightly soured and thickened cream, milder and less thick than American sour cream as it’s a thin cream instead.
The flavor is a lot more mild in my opinion and a touch buttery when served on grilled corn.

What is Cotija Cheese?

Cotija Cheese is a Hispanic-style cheese that was named after the town of Cotija in the Mexican state of Michoacán. It is a hard, crumbly cheese is made mostly from cow’s milk. It is white, fresh and salty so as to resemble feta cheese, but it does not taste exactly the same.

As mentioned above, parmesan, a mild feta, and chihuahua cheese are all acceptable substitutes for cotija cheese. I would personally sample them, which many stores with a gourmet cheese section will let you do before you purchase it. Start with cotija and snack on something in between samples to cleanse the palate. 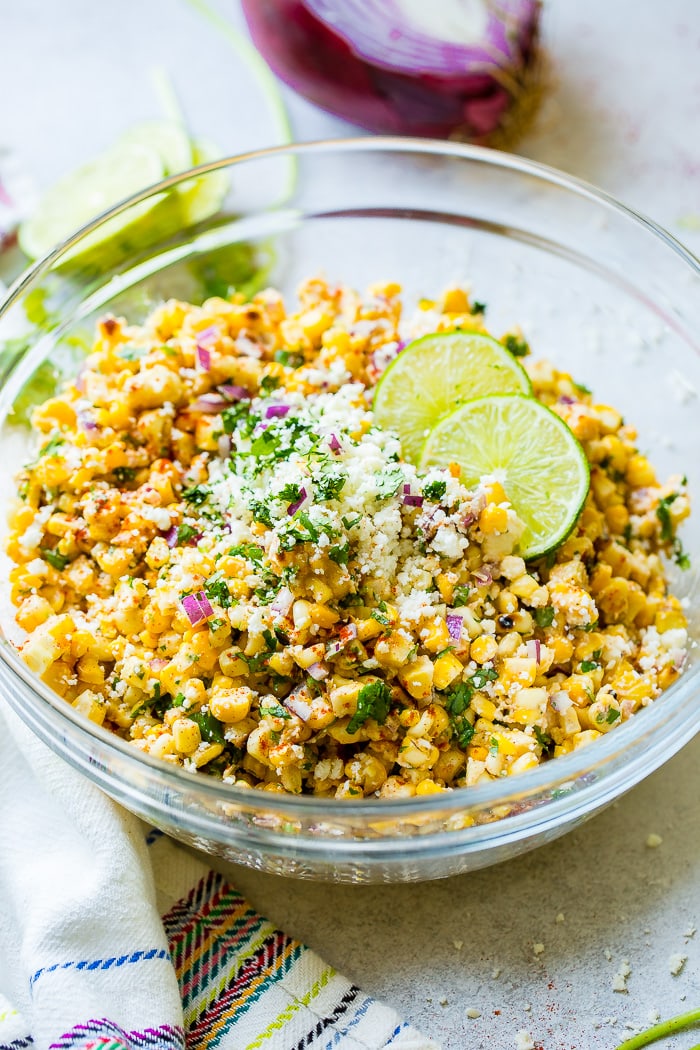 How to Make Elote with Frozen Corn

If you can’t get your hands on fresh corn on the cob, don’t panic. You can use frozen corn instead of fresh corn.

Start by placing the frozen corn in a skillet that has been heated to medium high along with a drizzle of oil. Do not worry about defrosting the corn first, just add it to the skillet.

Stir occasionally until it begins to char slightly and remove from the heat.

Proceed with the recipe as normal!

And yes, we really do this all winter long when we can’t get corn on the cob, so it does totally work. 🙂 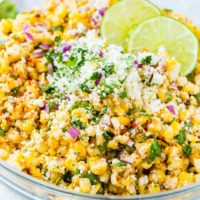 4.57 from 126 votes
Prep Time: 5 minutes
Cook Time: 10 minutes
Total Time: 15 minutes
Servings: 6 servings
Save Recipe Print Recipe
Every summer we enjoy plenty of grilled sweet corn, but this Elote Grilled Mexican Corn Salad is above and beyond with it's crema sauce, salty cotija cheese and that spicy seasoning!