I can’t remember if this was right before or right after the tree.

I woke up. I’d been dreaming that I was pulling weed after weed in the backyard when I’d come upon a tree nestled in a corner under our deck. It was almost like I was looking through a lens that zoomed in on the tree and I walked over to it. With a shovel I carefully dig around the tree and with my bare hands pulled it clean out of the dirt, roots and all.

Now most of us would wake up, roll over and recount the story to our husbands who wouldn’t really care or be surprised at the random dream but I woke up feeling it. I just could not get that tree out of my head! I told Cade, “it’s gotta go” 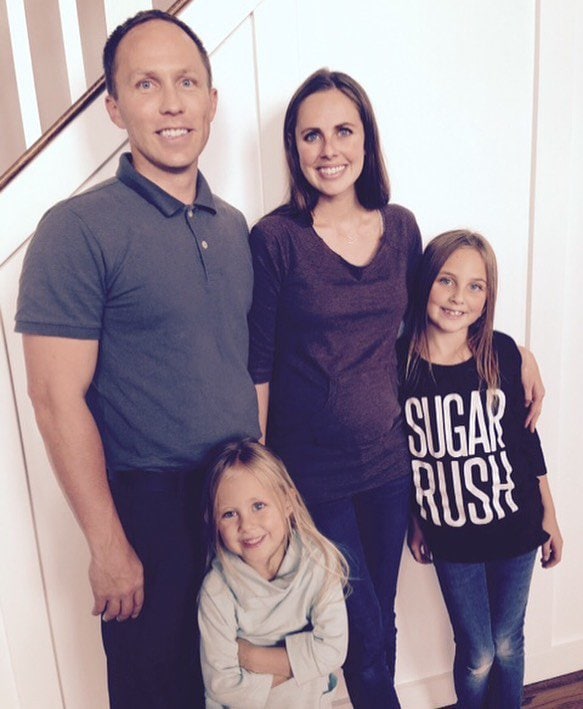 Cade and I worked together to dig around the tree, I was trying so hard to take it easy as I was feeling that green, sick to my stomach, body aching and utter exhaustion of pregnancy, but I was diligent. Cade kept saying, you’re sure you want this out?

It’s not that, I just can’t get it out of my head to pull it out.

And it was actually really quite hard even though it was a tiny Japanese maple.

I felt nothing.
No pain.
No worse nausea.
No feelings that something was wrong.
But two things were broken and we wouldn’t know it until November 4th, 2015.

When we got to the hospital we told them what had happened. I was worried the baby wasn’t ok. He wasn’t moving and I’d felt everything detach and all of that blood, my goodness it was worse than any childbirth for sure. This was no bloody show or beginnings of labor. It was like there had never been a baby, just a belly full of blood. (TMI? Trust me, I’m sparing you everything else. 😘😘)

Dr Cloward was on call and though Haskett had always been our doctor, she was amazing, Calming, kind and attentive. We were reassured that while I was contracting everything seemed to be ok and there was a possibility I could hold out for a few more weeks. They’d keep me on a few hours to monitor. I didn’t think they understood what we’d seen. But we waited, and Cade fell asleep 🙄

Cade is one of those people you want with you for something like childbirth. He’s calm, incredibly supportive and helpful and oh so encouraging. Nothing makes him woozy or uncomfortable and he makes you feel like you can do anything.
And I needed that.
This wasn’t my plan.
He wasn’t supposed to come early.
I’m a planner and an organizer. I get things done and I’m always ready so nothing shakes me.
But there I laid. Cade had called our friend Adam who was sleeping at our house while we were at the hospital. My mom would drive to Utah from Idaho the next day if anything happened.
But it wouldn’t, right?!
I couldn’t sleep. The contractions were slowing but my mind was racing.
Was I lacking faith and hope? Why couldn’t I believe that everything would stop and I wouldn’t have him yet.
Or was I feeling the reassurance that I would have him and all would be well? How can you tell the difference, especially in a moment of fear or crisis?
I decided to do what I’d done earlier in a previous pregnancy. Have I told you about the blessing to be healed never being given? I’ll tell it tomorrow.
For now I prayed to still my heart. To be still, to feel still, to listen.
If this was to be, grant me peace to embrace it.
Over and over I offered that prayer and two hours in the contractions hit hard and sure enough, there was no waiting, only delivering. Only a short hour or so later he arrived.
4 pounds 17 inches and the most alert baby I’d ever seen.
He knew. He was present and aware of exactly where he had chosen to come. And pardon the tears you can’t see, but maybe he even chose us, chose me to be his mother. 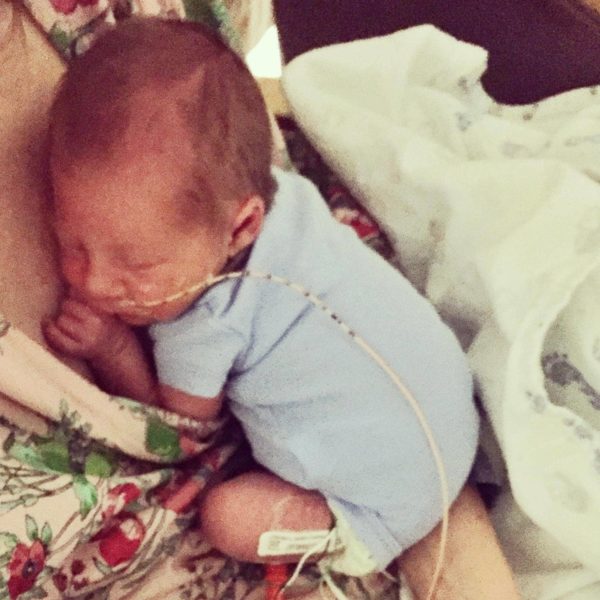 This was the first baby I got to have placed on my chest after delivery and while this isn’t the picture it is how he preferred to be our entire stay in the NICU, all snuggled up and he wanted skin contact. He knew his momma. Isn’t that incredible? That moment when they first placed him on me was unreal. The peace, the burning in my chest, the love, my goodness, it was unreal . And totally unexpected.

I had no idea that when having a baby a month early would mean that my room would be packed to the brim. Extra nurses, the doctor, Cade, a pediatrician, respiratory specialists all watching me deliver with the anticipation that this baby could have problems, this baby could be fighting to survive when he arrived. It was surreal.

But did you watch the video? He let out a perfect little cry and then immediately quieted, completely still and locked his eyes on mine as they handed him to me. We just stared at each other and I know the facts, newborns can’t see perfectly like we can, so how it happened I don’t know but everyone in the room fell silent and then slowly started to comment on what they were watching and what we all were feeling.

Friends, I’m telling you that room had the most incredible buzz and warmth that was not of this world but could perfectly be felt. He knew exactly where he was and who had him. Suddenly the muttering began, “my goodness, I’ve never seen a baby, let alone a preemie look at someone like that, it’s like he really sees you and knows you. It’s like he wishes he could but open his mouth because he has a message to share.”

And we felt it.

Children do not merely come to earth. Children come from a heaven where they have lived and loved with heavenly parents. They come with a purpose, a mission, a ministry to fulfill. Looking at him looking at me I felt a power I could not deny, each of us has purpose. Each of us is known and loved. I don’t know why life sucks. I don’t know why people hurt and die and why life falls apart and is hard but I know that there is someone who knows our name and stands with us, urging us to turn back to Him.

And then he was gone, whisked off for testing.