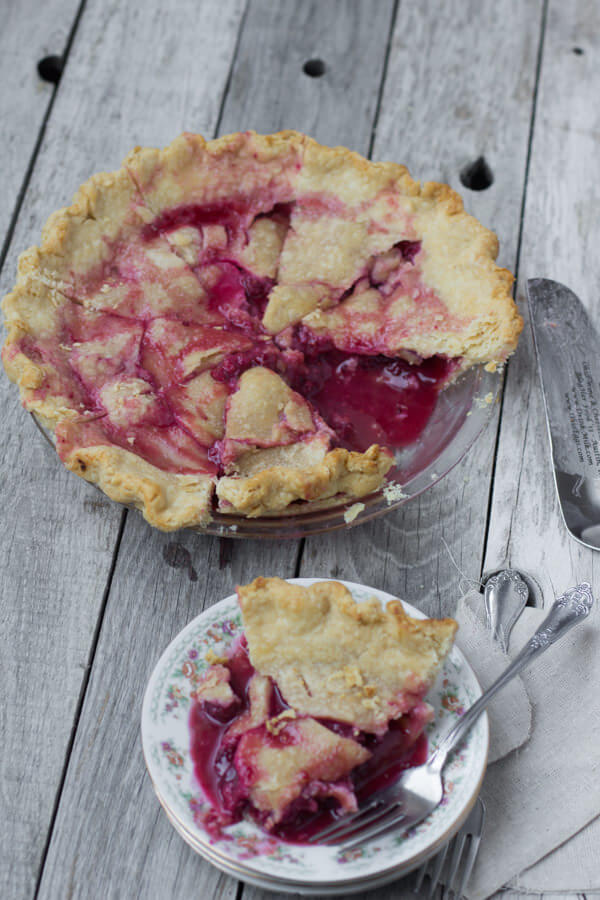 Pie is one of the greatest desserts and yet it gets made far less than other desserts. I think one of the biggest reasons is the pie crust. It seems so intimidating. I know it did to me. Growing up my mom just seemed to make it happen so easily and I would help, but mostly with making the little cinnamon sugar crisps with the left over pie dough. Once I was older I would try different recipes and either they didn’t turn out at all or they weren’t consistent. So, I turned to my mom who taught me about Great Grandma’s fool proof old fashioned raspberry pie. Which of course has changed my life and brought pie, without stress into my home and now Driscoll’s Berries and I want to teach you as part of our Made with Love program! 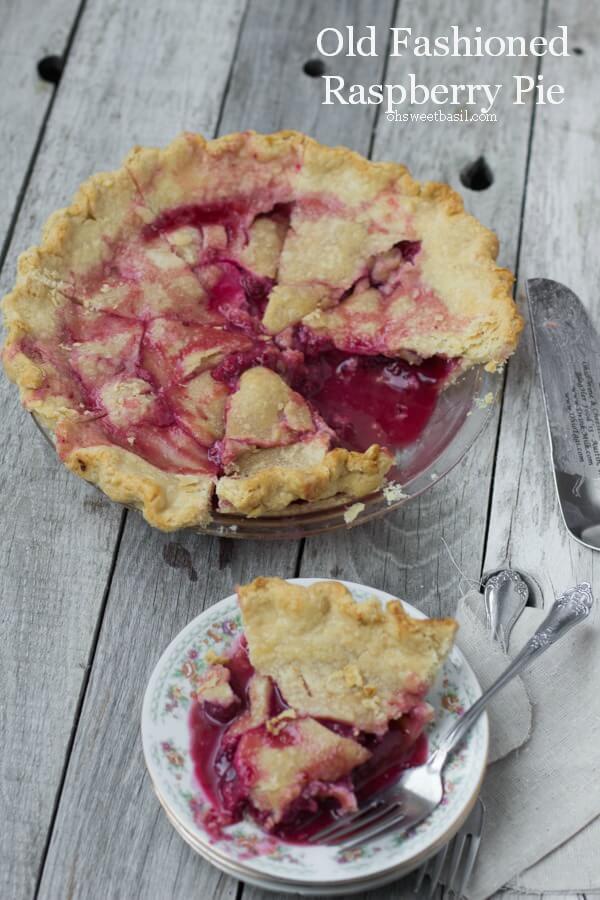 Isn’t it a gorgeous pie? I like to swirl the hot pie a little when it comes out of the oven so the juices kind of leak out and make the top look beautiful without having to mess with a lattice top. And speaking of decorating the pie, let’s go ahead and talk about a silly, but very sweet memory that for some reason means so much to me even though it’s just a simple little smiley face. Oh, and side note-there’s a fun sweepstakes for 2 grand prize winners of a kitchenaid mixer and berries for a year, plus 4 second place winners for berries for a year. 1 grand prize and 2 second place winners will be chosen at the end of every month. Who wouldn’t want to win a KitchenAid?! 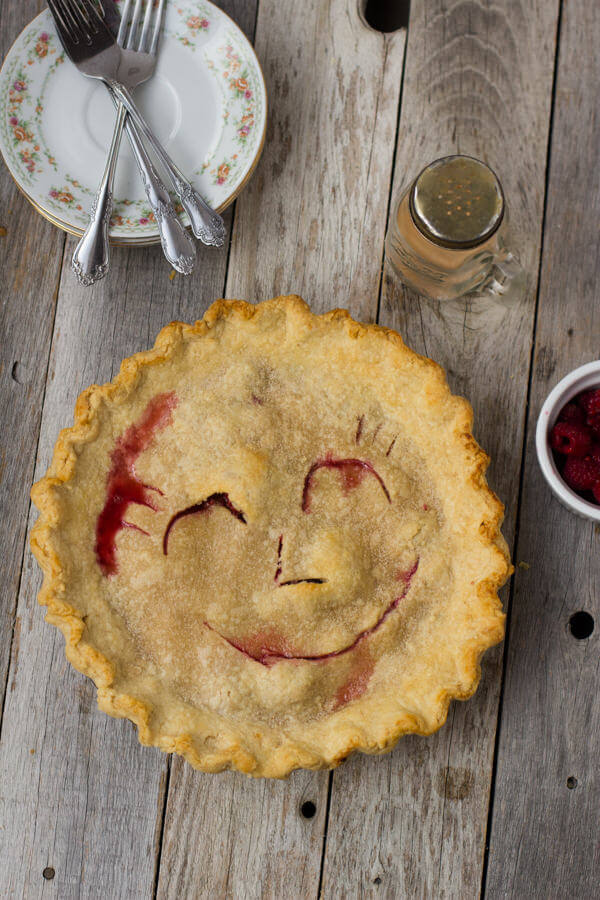 My mom, and I know that I’m a bit biased, but my mom is one of the most tenderhearted, hard working, patient, and genuine people I know. I’ve never heard her belittle anyone in or outside of our family, even behind closed doors. She is honest, true, mindful and forgiving. BUT, she hates cooked apples. I know. It’s ridiculous and her only downfall. Oh, mom you know it’s true. Growing up was a lot of fun for us kids. We got to go to our grandparents’ houses every year and run around like little hooligans. Mom always let us be little. We were never held to a higher standard until we were ready (I’m working on that with my children) and always allowed to help out in every way. Thanksgiving always involved friends and family and my mom always made homemade pies. It was work, but we would help and she would guide us. The house would warm up with the oven being on all day and the smells filling the entire home. Mom would always do the pie lid herself and if you knew her you knew exactly what kind of pie it was without ever cutting the pie. 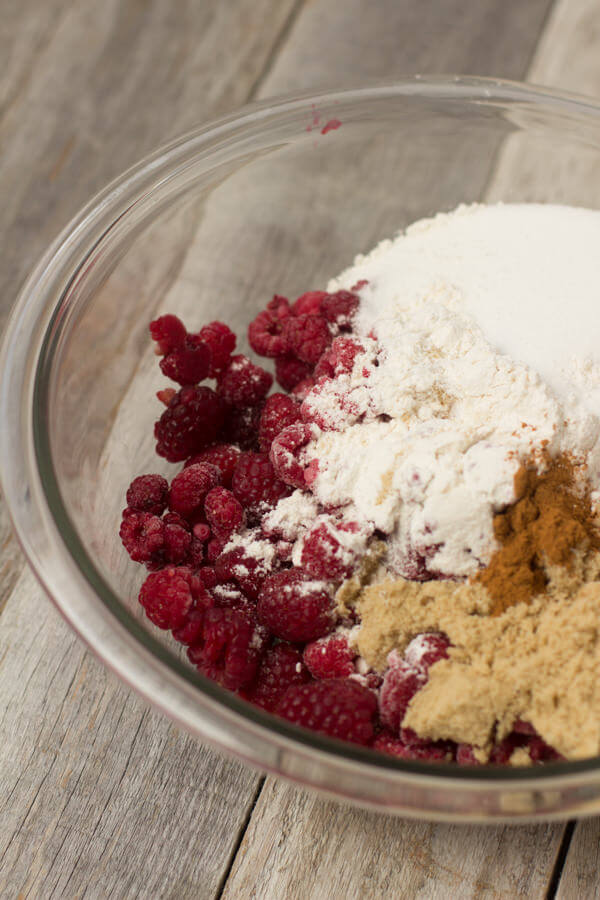 Like I said, Mom doesn’t like cooked apples, but she loves her Mamma’s raspberry pie. The family loves apple pie so she would go ahead and make one, but make her point still. The raspberry pie would have a cute little smiley face while the apple pie would have a face with a little “tongue” traced into the crust so as if the pie “face” was sticking its tongue out in disgust. As a kid I thought it was hilarious and oh so much fun. As an adult, it’s become a sweet memory that will remind me of the quietly silly, but sacrificing mother that I have. Isn’t it funny how the little things end up meaning more than anything else? Sometimes I think about growing up, what will I remember about my life and parents when they are gone, and what will my children remember about me. I’d give up everything I have to mean as much to my children as my mom means to me and to influence them for good the way she has. How did I ever deserve someone that was willing to do anything in the kindest, most loving way for her children and those around her and how will I ever do the same in my family? It’s so true, when you are wondering who you are, you can look to your past and gain strength and understanding by discovering those who came before you. I think I need to try a little harder to be a little better.

How to Avoid a Soggy Pie Crust

Fruit pies like this one can get very juicy and sometimes the bottom crust gets soggy. The best ways to avoid a soggy pie crust are to blind bake with both a docking and weights method followed by an egg wash and further baking. Head to our lemon meringue pie post for all the details on blind baking the bottom crust. It’s totally optional but if you have the time, I totally recommend it!

Too much water will make pie crust sticky and result in tough pastry.

Too little water will make the pastry dry and crumbly, resulting in pastry that cracks and falls apart.

Over kneading pie dough will also make it tough.

The dry ingredients should just be mixed into the wet until the dough holds together when squeezed into a ball.

Why Does Pie Crust Shrink?

The biggest reason pie crust shrinks is because it hasn’t been given enough time to rest.

Resting the pie dough will allow the gluten to relax, which will help the dough not shrink.

Also, if the dough is rolled too thin, it tends to shrink.

Can Raspberry Pie Be Frozen Before It Is Baked?

If you are going to freeze fruit pies to be baked and served later, it is best to freeze them before baking.

Raspberry pie will taste just like fresh raspberry pie if it is frozen before it is baked.

Prepare the pie up to the point of baking, wrap well in plastic wrap and foil and freeze.

Frozen pies will keep up to 4 months.

There is no need to thaw before baking.

Simply place the frozen pie on a baking sheet in a 400 degree oven for 30 minutes.

Reduce the heat to 350 degrees and continue baking for 35-40 minutes. 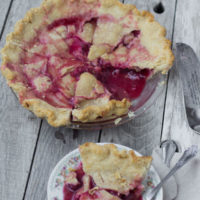 Sometimes I only use a portion of the egg and water mixture while other times it takes the entire amount. I don't know why, so I just add a little at a time until the dough comes together. We don't suggest anything other than the Ultra Gel but if you need to use flour try 1/3-1/2 cup. If your berries are extra juicy you could use up to 3/4-1 cup of flour. *Head to our lemon meringue pie post for all the details on blind baking. To freeze: Prepare the pie up to the point of baking, wrap well in plastic wrap and foil and freeze. Frozen pies will keep up to 4 months.
Nutrition Facts
Old Fashioned Raspberry Pie
Amount Per Serving (1 g)
Calories 478 Calories from Fat 81
% Daily Value*
Fat 9g14%
Saturated Fat 5g31%
Cholesterol 47mg16%
Sodium 468mg20%
Potassium 211mg6%
Carbohydrates 91g30%
Fiber 7g29%
Sugar 37g41%
Protein 9g18%
Vitamin A 600IU12%
Vitamin C 23mg28%
Calcium 50mg5%
Iron 4mg22%
* Percent Daily Values are based on a 2000 calorie diet.
Author: Sweet Basil
Course: 500+ Best Dessert Recipes
Keyword: heirloom, pie, pie crust, raspberries, raspberry pie 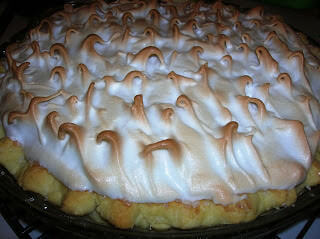 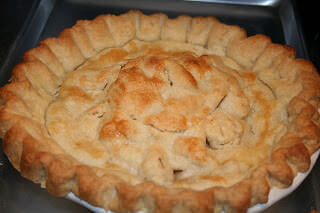