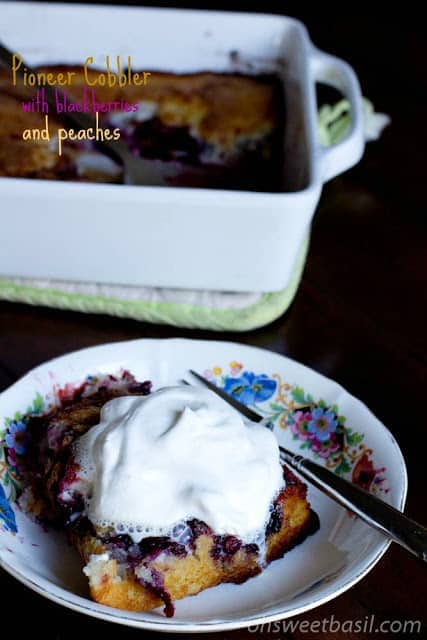 Did you know that Utah celebrates an extra little holiday? It’s called Pioneer Day, and it’s on July 24. It’s to celebrate the Pioneers making it here after so much struggle. If you would like to hear one amazing story, although there are so many more, read about the Martin Handcart Company. This Cobbler recipe is from over 100 years ago and perfect for this special holiday.

Anyway, the more I thought about the holiday approaching the more I realized that I didn’t know much about my ancestors. Both sides of my family have heavily searched out their family history, but I’ve never taken the time to know the stories and pedigrees myself. I’ve decided that must change. Our history tells us who we are, where we came from and many times gives us unseen strength to become better and strive for more in our life. You cannot help but feel inspired to be a little better when you hear the sacrifices that your family has made to be in a free country, or to survive through a hard life.

I learned about my Dad’s 4th great grandfather on his mother’s side of the family, who I was surprised to learn settled Lehi, Utah, which is where we now live. I never even realized our family had started in Utah, especially since I grew up in Washington and my dad in Oregon. So cool to think I reside in a place my ancestor worked so hard to get to, so that generations could live a better life. 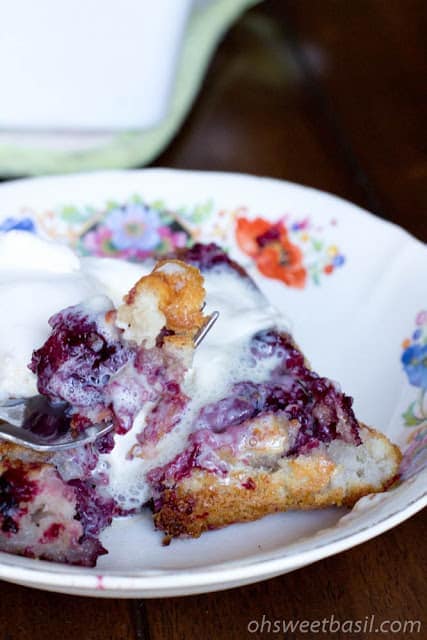 I’m on a mission to discover more about my past, and I would love to hear about yours. I’d love to hear any stories that you have about your own past, and if you don’t know anything, well start looking! There are so many shows out that are about discovering your past, like “Who Do You Think You Are?” and even celebrities are learning about themselves and their past. It would be amazing to see everyone start looking into their past.

Need help getting started? Family Search is fantastic, and Ancestry can also help.

Cobblers are not the same thing as pies.

Pies are fruit fillings placed inside of pastry.

The pastry may be placed on the bottom and the top of the fruit, or just on top.

Cobbler is a dish consisting of a fruit or savoury filling poured into a large baking dish and covered with a batter, biscuit, or dumpling before being baked.

Can You Use Fresh Fruit In a Cobbler?

Cobbler can be made from any fruit, fresh, canned, or frozen.

Can You Use Salted Butter in Recipes Instead of Unsalted?

You could leave any added salt out of the recipe to avoid a too salty product. 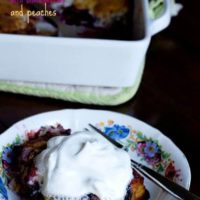 “Jorgen Christopherson Folkmann was a blacksmith by trade on his native island of Bornholm, Denmark.
He was born on the 10th of September 1792. When he reached manhood
he married Gjerturd Kristine Ipsen .

Jorgen and Gjerturdwere were the parents of eight children, three boys and five girls.

Mormon missionaries arrived in Bornholm and preached at their street meetings of the restoration
of the gospel by the Prophet Joseph Smith. The Folkman family listened to their message and their
testimony. Several of Jorgen’s children were baptized. There was much opposition to the Church in
Bornholm, and Jorgen’s sons were victims of mob persecution. Jorgen was baptized on the 30 th of
December 1856, and on the 25th of April the following year he emigrated to America with his son and
daughter-in-law.

They left Copenhagen on the 18th of April with a group of emigrating Saints and sailed to Hull, England,
where they transferred from the boat to railroad cars to continue their journey to Liverpool.

As Jorgen had used what means he had for the support of missionaries and for his son Peter’s
emigration and his own emigration, he was forced to travel to Utah by the cheapest means possible.
They continued their journey by handcart, which would be a most difficult mode of travel over the
rolling hills of Iowa, the sands of Nebraska, the hills of Wyoming, and up over the plateaus and through
the mountains to Salt Lake City.

Four mule teams were provided for hauling extra pro visions and the helpless and sick. But, because of
poor management, the drivers went on ahead, with no concern for the handcart company. Finally, the
company was able to scrape enough money together to buy an ox team from a passing farmer. This was
their hospital wagon, often carrying as many as 20 persons at one time. Quite a number of emigrants
took sick and many died.

The crossing of the Platte River was extremely difficult and took two days. The carts had to be emptied
and pulled across by the men, and then all of the pioneer’s belongings had to be carried across on
horses behind the Indian guides.

On the 9th of August the company reached Fort Laramie and camped there to rest for two days. They
then entered the Black Hills where wood and grass was more abundant but water was more difficult to
find.

Jorgen ventured off on what he thought was a cutoff, hoping to find water to quench his thirst. Finally
he got on the wrong track and was lost. He walked aimlessly for three days, and found nothing to eat
but a few berries. On the evening of the second day he felt very sick and tired and made himself a bed
of dried grass and laid down to die. However, the next morning he awoke feeling better so he continued
his tramp. He came to the Platte River and waded across. On the other side he met a mountaineer and
his Indian wife. They put him in their wagon and took him to their tent and cared for him. The next day
the mountaineer caught up with the hand cart company and returned Jorgen to his family.

In spite of the problems, this company of Saints was not without hope, and consequently felt the joy
that comes from the expectation of better days. They often broke out in songs and peals of mirth.
There were also pleasures along the way. Each evening there was singing and maybe dancing around
the campfire.

On the 22nd of August, the company was met at Devil’s Gate by a supply train sent with much needed
provisions from Salt Lake City. The most difficult part of the journey was the last part up the mountain
inclines and through the narrow canyons. But they marched with a feeling of thankfulness and grand
expectations into the City of the Saints on the 13th of September, 1857. A group of these Scandinavian
Saints settled in Lehi.”