This traditional Seven Layer Salad is piled high with peas, crumbled bacon, cheese, and more! Perfect for potlucks and barbecues! 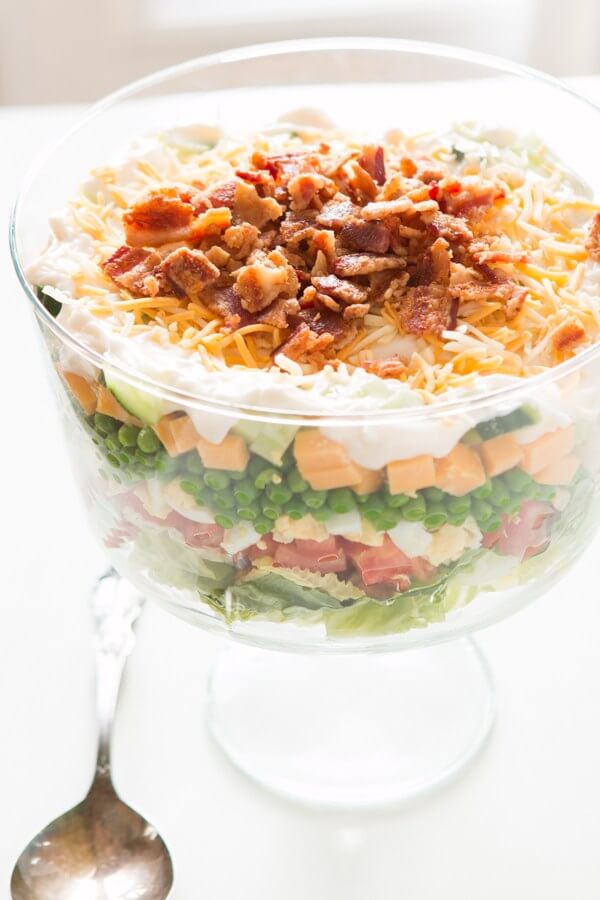 I grew up on fresh from the garden produce and I never realized just how lucky I was to have such a huge garden growing up, but I definitely miss it now that I’m older. This layered pea salad was something I saw a lot at potlucks growing up but man, I had no idea how good it was!

A lot changes with age doesn’t it? We gain a new appreciation for all that we had, the freedom of childhood, and the foods our family enjoyed together. I think of all the running around and pretending I did as a kid and wonder if our kids get slighted a bit. Yes, they still play, but is it as carefree as it was for me and do they use their imaginations as much?

The rule at our house is each child gets to pick one show a week and the rest of play should be with friends, outside, inside, whatever — just not with the TV. I hope that they look back on their childhood and have carefree memories. I also hope they keep making this easy seven layer salad because it’s totally my favorite again.

What’s Needed for This Layered Salad?

As the name suggests, this seven layer salad consists of seven main ingredients: 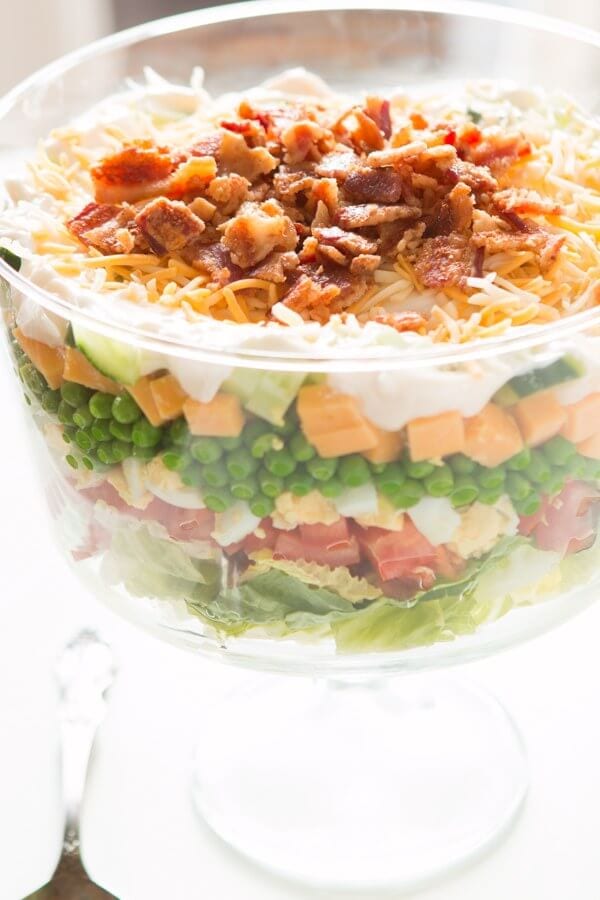 How to Make Seven Layer Salad

Once assembled, this traditional seven layer salad will last up to 24 hours in the fridge. However, it’s best within a few hours of making it.

Is Romaine Lettuce Better Than Iceberg?

Romaine is packed with nutrients, including vitamins A and C, and good amounts of folic acid and magnesium.

Generally speaking, the darker green the leaves, the more nutritious the greens are.

What to Serve with Seven Layer Salad

This layered pea salad pairs well with pretty much any main dish at a barbecue. But if you’re in need of ideas, here are a few yummy recipes to make alongside this layered salad: 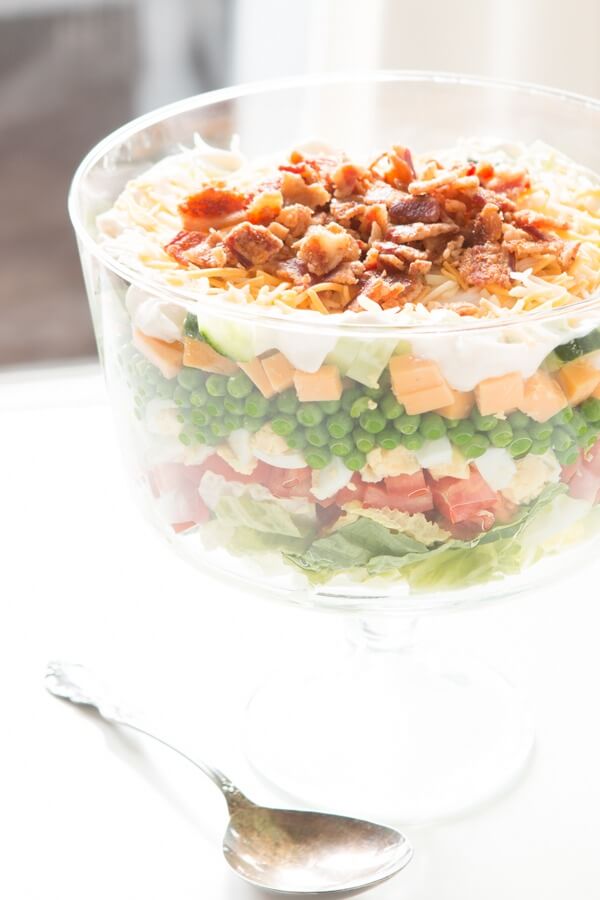 Note that we recommend using frozen, defrosted peas in this layered salad. Frozen peas are firmer than canned peas and have a fresher flavor.

We prefer real mayonnaise in the seven layer salad dressing, but you’re welcome to use Miracle Whip if that’s what you grew up eating.

If you’d like to prep this layered pea salad in advance, I recommend chopping the individual ingredients and storing them separately until you’re ready to assemble the salad. 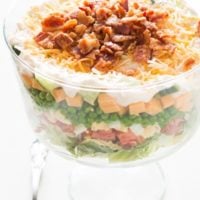 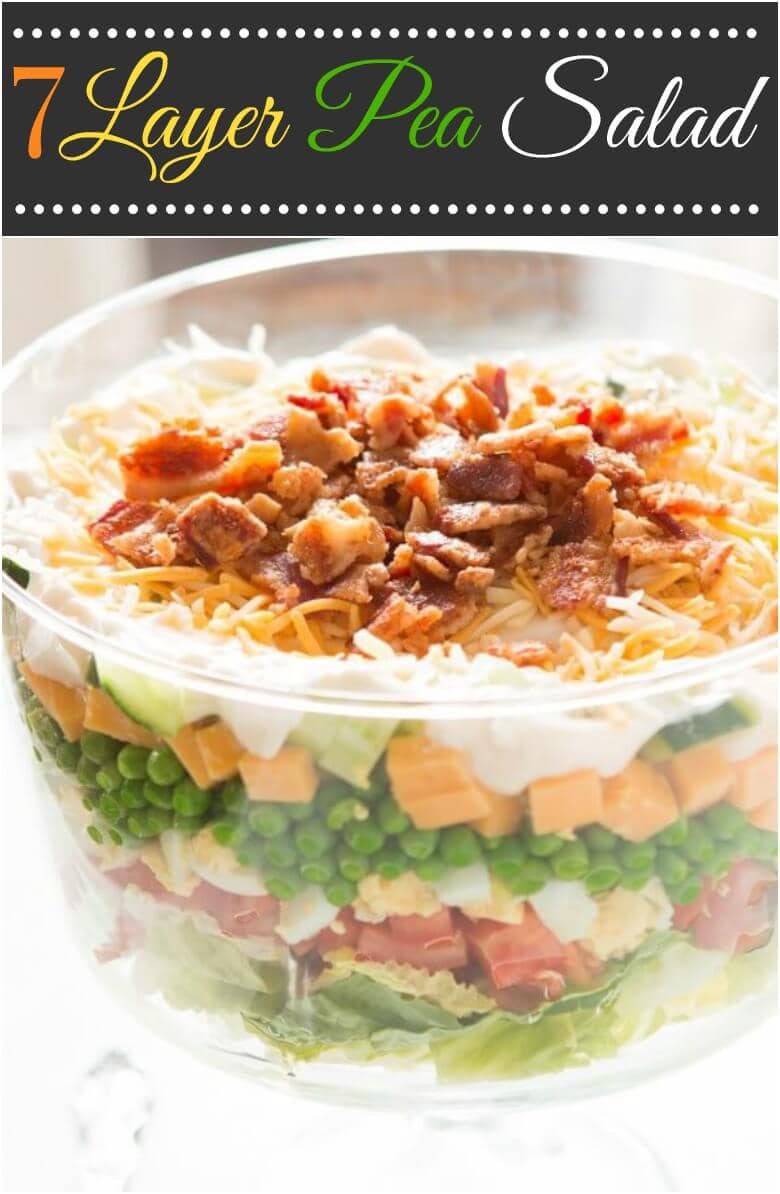