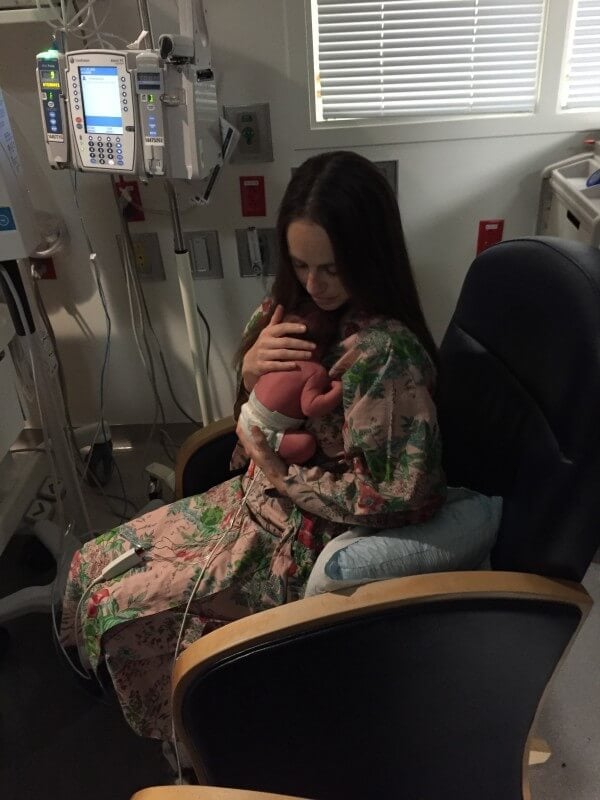 I debated about writing this post as we don’t have any good photos since the nicu is dark and we are crazy exhausted and busy with life, but in the end it’s his story and it’s best to write it all down before the details and moments are fading away. But let’s back up shall we? Baby boy is here and it all started on Tuesday.

I’d been getting more and more sick and knew that in just a few short weeks baby would be here. I got sick again with both of our girls and both were born two weeks early in the 5 pound range, both were close to 5 pounds one month out but seemed to spend the last 2 weeks growing in height not weight and were born at 18 and 19 inches. We figured baby boy would probably be the same.

Tuesday came and I woke up not feeling well, no surprise there, but this time it was different. I knew it was going to be a pretty rough day. By lunch I was completely on the couch and barely able to function. I was starting to feel those darn contractions, but with only 4 weeks left it was nothing new. Cade got home from work a few hours later and insisted I go lay down. He’s a keeper I tell ya, but I didn’t want to ditch the family and chores on him so I tried to help a bit with homework which quickly became a mistake and I ended upstairs in bed. A few hours later I had my own baby shower to attend so I quickly got ready and left. I wanted to throw my guts up, my head was spinning and contractions were really starting to bother me so I sat on the couch and smiled the best I could. I didn’t want anyone to worry or ruin the hard work of two amazing friends. But that lasted an hour and a half more than I should have let it because suddenly I knew I’d better get home fast. 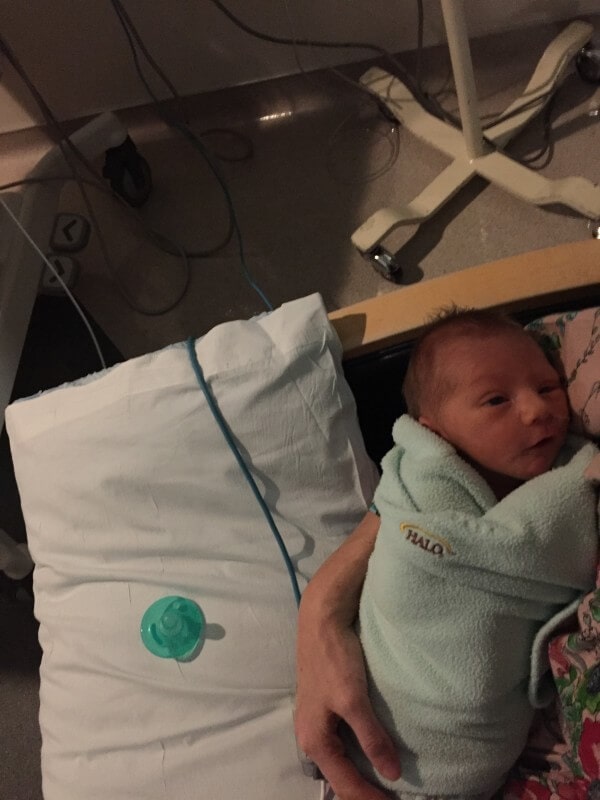 Walking in the door Cade knew I was sick in a bad way, but again it’s something that happens in my pregnancy so we just went straight to bed to try to relax. I could not sleep and by midnight I knew contractions were coming too strong, and yet we debated about what to do. Surely he couldn’t be trying to come 4 weeks early? We still had a little list of to-do’s and the nursery wasn’t even put together yet! Finally we decided that we had better go ahead and pack a bag and just go to at least stop contractions. Cade got up first to grab me some clothes and once he disappeared into the closet I stood and immediately my heart sank, something was wrong. 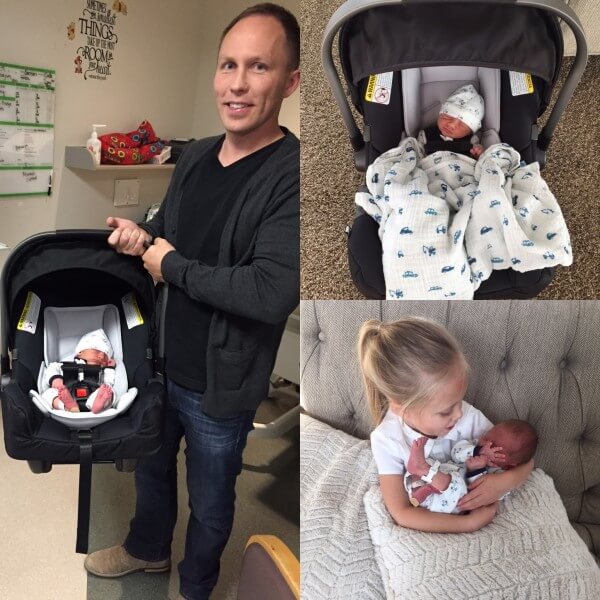 It wasn’t like a gush from your water breaking, though that has never happened to me anyway so I wouldn’t know. No, this was something more and I rushed to the bathroom as a huge contraction hit. I was bleeding everywhere and more importantly a clot the size of my hand was there. This was not right and I called out to Cade, “Call Paige (our dear friend), we’ve got to go!” Cade came around the corner and I could see the worry on his face. It was an awful feeling and immediately I was in excruciating pain again.

Off we went to the hospital and I changed into a gown only to have clots again. We monitored things and we breathed out a sigh of relief when we heard our guy’s heart beat pounding away on the monitor. We continued to watch as contraction after contraction hit me in my lower back and slowly spread around to my stomach. I’m always a back laborer. As time went by my contractions started to slow. I was only at a 3, almost 4 and 90% effaced but I knew I could have that for a while, it was the bleeding and contractions that needed to go away. 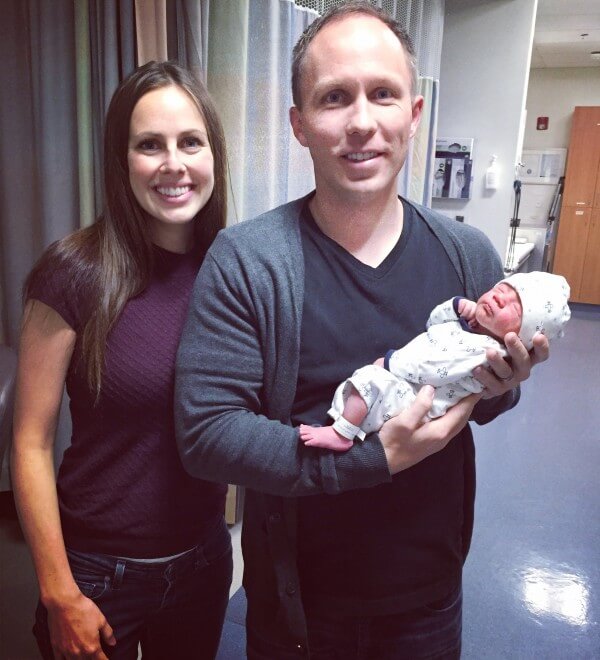 Dr Haskett had been called, annnnnd he was at home with the stomach flu. WHAT?! I’m the one always throwing up, not him! But thankfully Dr Clowder was on call and she’s pretty much just as wonderful. She came in and helped us feel so much better about everything and even gave us hope that maybe we could hold out a little longer as I really wanted him to “bake” a little longer. We honestly had such a nice time chatting and I was able to talk through all of my contractions.

The nurse turned out the lights and told us to get a little sleep and we could see if things stopped. Cade conked out pretty well on the pull out and I snuggled in but within minutes contractions were coming on more and more. I waited over an hour, silently suffering through contractions because I thought Cade may be asleep (and little did I know he was only dozing and not talking because he thought I was asleep and wanted me to get as much rest as possible.) and I wanted him to get some rest because I knew how much work he had the next day. Suddenly I couldn’t take it anymore, I whispered to Cade that the contractions were a real beast and he was immediately at my side. The nurse walked in and saw a huge contraction on the monitor and me trying to breath through it. I was at an 8 and we were not going home empty handed.

By now Dr Clowder wasn’t on call anymore, but instead Dr. Thomas. Bless his heart, what a kind, sincere, and incredibly good coach and doctor he was. We are so used to Dr Haskett and have really enjoyed our friendship with him, but if it couldn’t be him we were so glad that his partners were just as fantastic. We had a little boy, a perfectly tiny little guy. He was rushed off to the NICU after a quick snuggle and then we followed closely behind. We ended up spending 5 days in the NICU and then by a little miracle after a priesthood blessing we brought him home at 4.3 and 17″.

There’s so much more to tell as we’ve been back and forth to the hospital ever since being discharged but I’ll tackle that in another post. He’s here. He’s perfection. And we are unbelievably grateful.