Looking for feed the hungry ideas for Light The World campaign? Our family has had some pretty unbelievable experiences, some so touching we can’t even write them down. 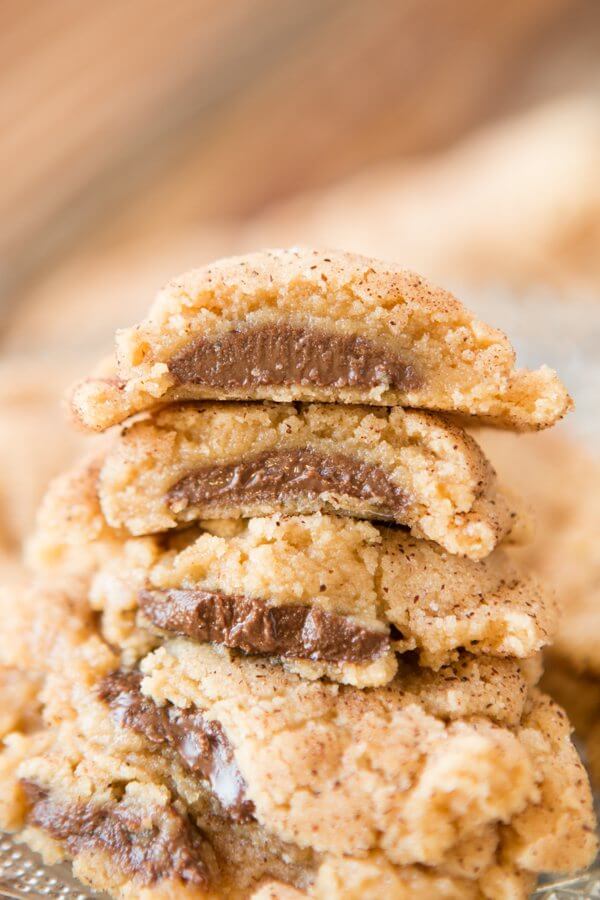 We had been unemployed with two small children for over a year and we were feeling quite broken. Oh, we were so frustrated but we were also just certain that there was a reason for it and that our prayers would be answered in looking for a job. We held on to the feeling that it would be ok and knew that it would be our choice to live and serve as happy as we could in the darkest of times.

Sure we cried and got mad at our situation at times but it quickly left and we pressed forward.

At one point our savings account had been spent and we had sold a piece of furniture to pay the bills . We were living off of our food storage (what we had bought and placed in storage in case of emergency) and only had a few dollars left.  I went to the store all alone to buy a few things. I felt like somehow everyone knew I had nothing as I walked through those aisles. We hadn’t had fresh produce in a year and I couldn’t imagine ever going shopping and just buying whatever I needed, especially a want.

I picked up milk, bread, a small cheese and peanut butter that was on sale. When checking out it rang up too high and I awkwardly said, “oh, I actually didn’t need that peanut butter” paid for the rest and quickly left feeling totally humiliated.

I’ve honestly never felt so low and alone. It was a moment I wondered for the first time ever, did I have worth?

As I approached our car a bagger came running up to me and explained that an older gentleman had said that no one should ever be without peanut butter and bought it tor me. I can’t even type without tears streaming down my face.

That man had compassion on me when he could have seen me as lazy or worthless because I couldn’t even buy peanut butter or a million other things. Instead he saw a human being that needed a tender mercy and he didn’t need to ask any questions, he just needed to act.  He was my angel. I’ll never know who he was, but my life would be totally different if that chance encounter had never happened.

I joke about my peanut butter obsession on here a lot, but this is the real reason I adore it. It’s a symbol and reminder for me.

💗One moment changed my life.  I knew God knew and loved me. I knew we would be ok and drove home with a promise to never forget and to always pay it forward, which is where today’s post comes in. 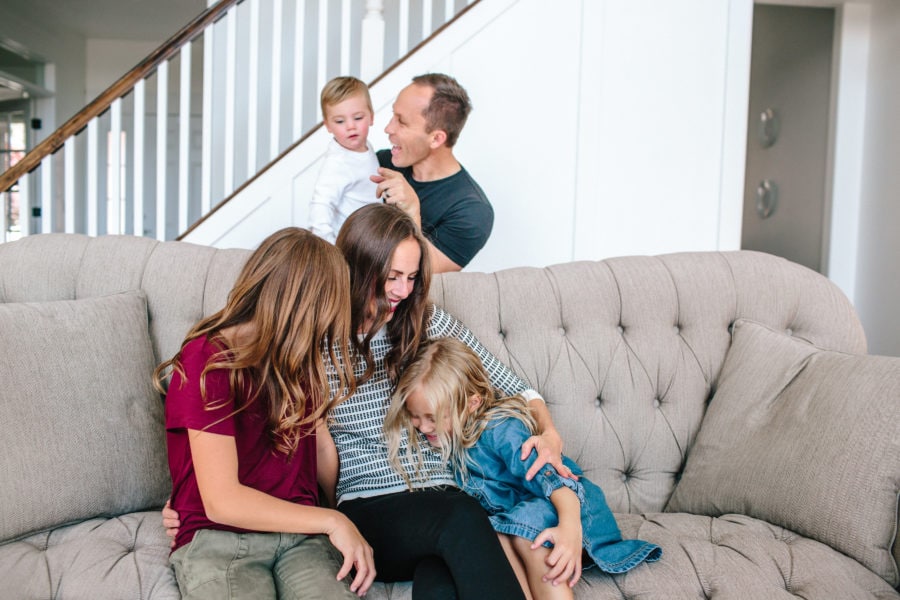 Last year millions of people participated in the #LightTheWorld campaign which was started by the LDS church. You can print off a free calendar for Light The World and then there are 25 ways to serve over 25 days. Last year was such an incredible experience for our family and we were so excited to hear that it was back this year.

We knew that the little things were going to work best for our family since we have such small children, but we wanted at least a few bigger things mixed in. We teamed up with ComeuntoChrist.org to tackle, Feed the Hungry and I’m seriously in tears just thinking about the experiences we’ve had. Whether or not you’re religious doesn’t matter, it’s about  finding ways to serve for 25 days and you’ll never be the same after such an experience. 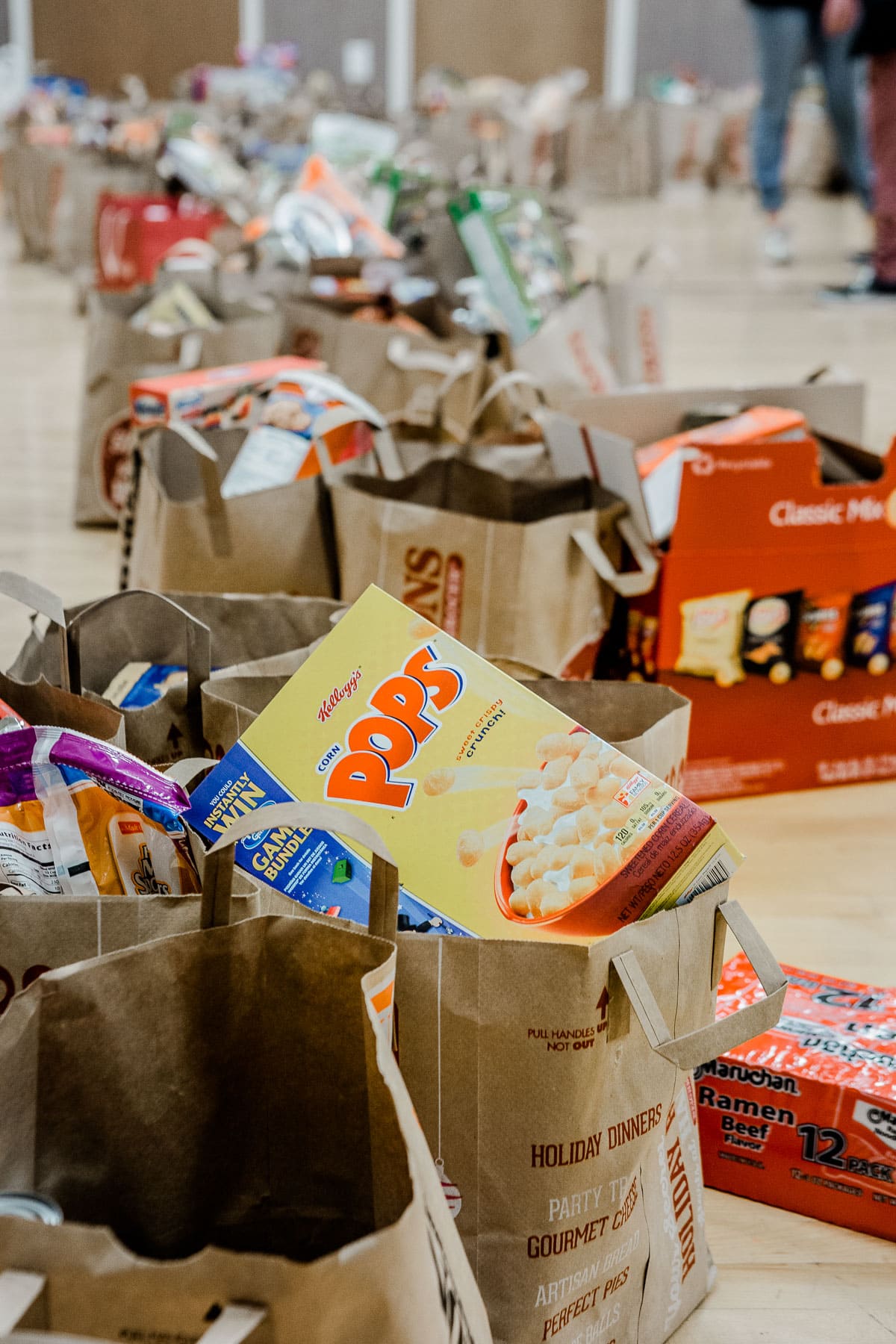 Feed the Hungry ideas for  Light the World Campaign

We’ve got some feed the hungry ideas for the Light the World Campaign, but if you have others we would love, love, love to have you comment so that others can benefit from your ideas and find what works best for their family. 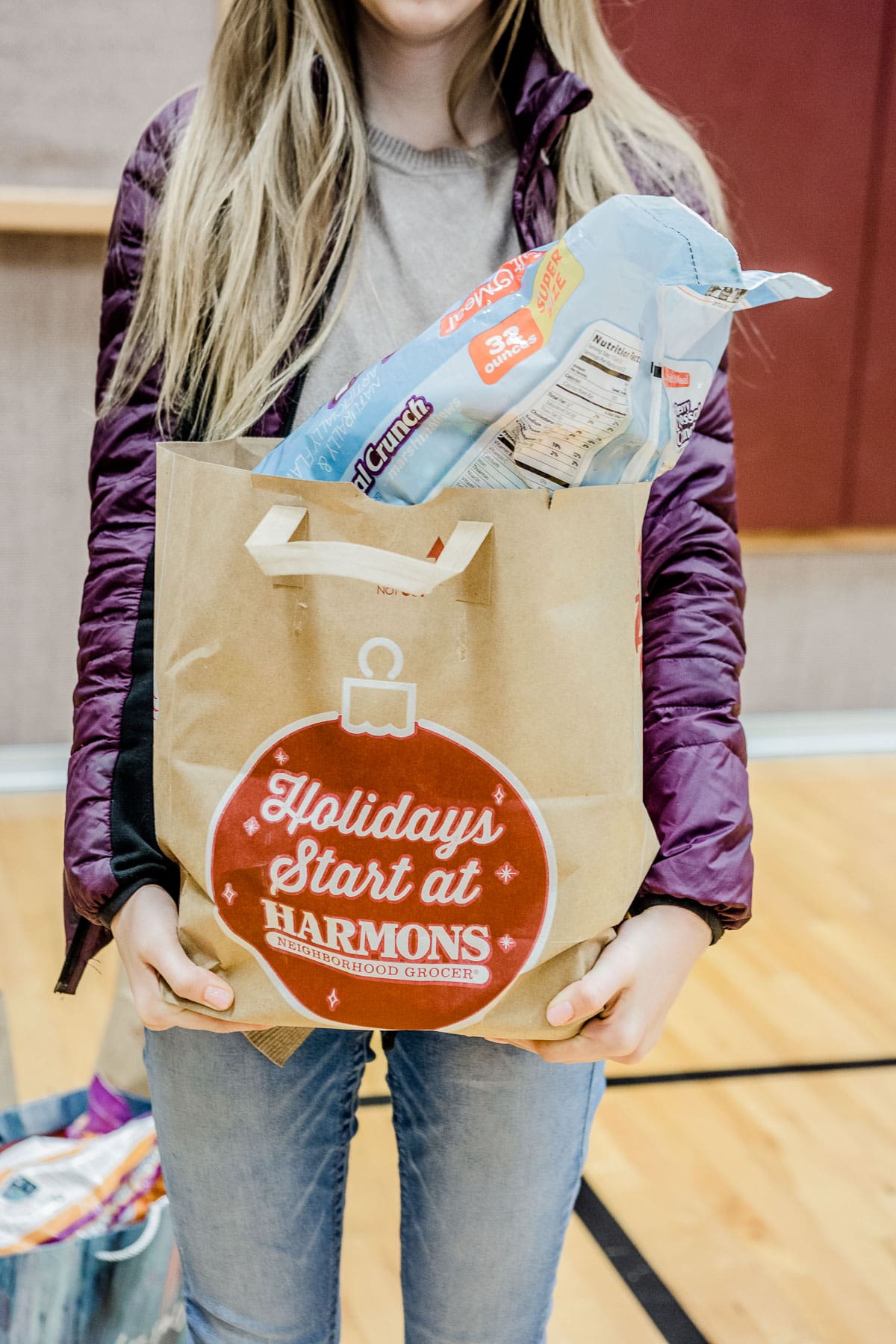 We got together with the LDS missionaries in our area who inspired us to hold a local neighborhood food drive and deliver to our very own neighbors who were carrying heavy burdens. Or at least we thought it was just going to be a food drive.

The missionaries were kind enough to be our worker bees and deliver a simple flier door to door, inviting our neighbors to participate in a local food drive. If ever you need service, those LDS missionaries are so awesome and we definitely needed the hands so we took full advantage.

We posted the flier on our social media and invited friends and family to join in and drop off food the day before we delivered. I was a little bit stressed as things began to get closer. Would anyone come? Would there be enough food to deliver?

The response was incredible. We gathered the youth from our church and let them completely handle everything, and they did. It was so touching to watch these teenagers direct every aspect of the food drive. They did something important and you could see in their eyes that they felt it. It’s amazing how service changes not just the person receiving the help, but the one giving it. 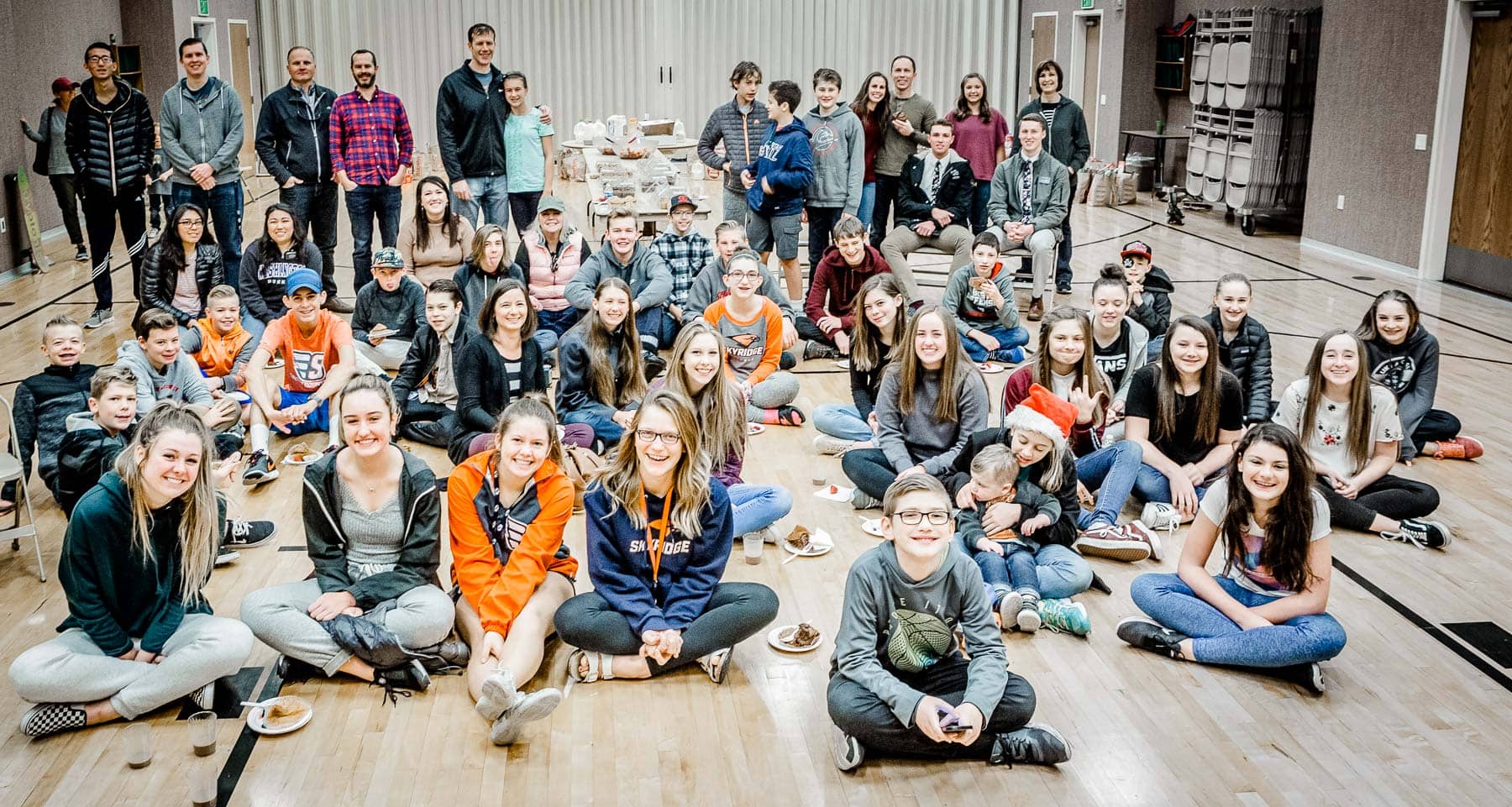 The following day we delivered right to doorsteps of those needing a little lifting this holiday season. The enthusiasm to get out there and make a difference was not only contagious but you couldn’t help but feel hope in the rising generation. They are going to do some pretty fantastic things.

Some of the families we delivered to we didn’t even know if they needed groceries, but were going off of that little feeling when a name pops into your head and you know you need to act. We won’t ever know what all of those families thought when they came home to piles of grocery bags on their doorstep, but we don’t need to know, we just needed to reach out and be the light in someone’s life. 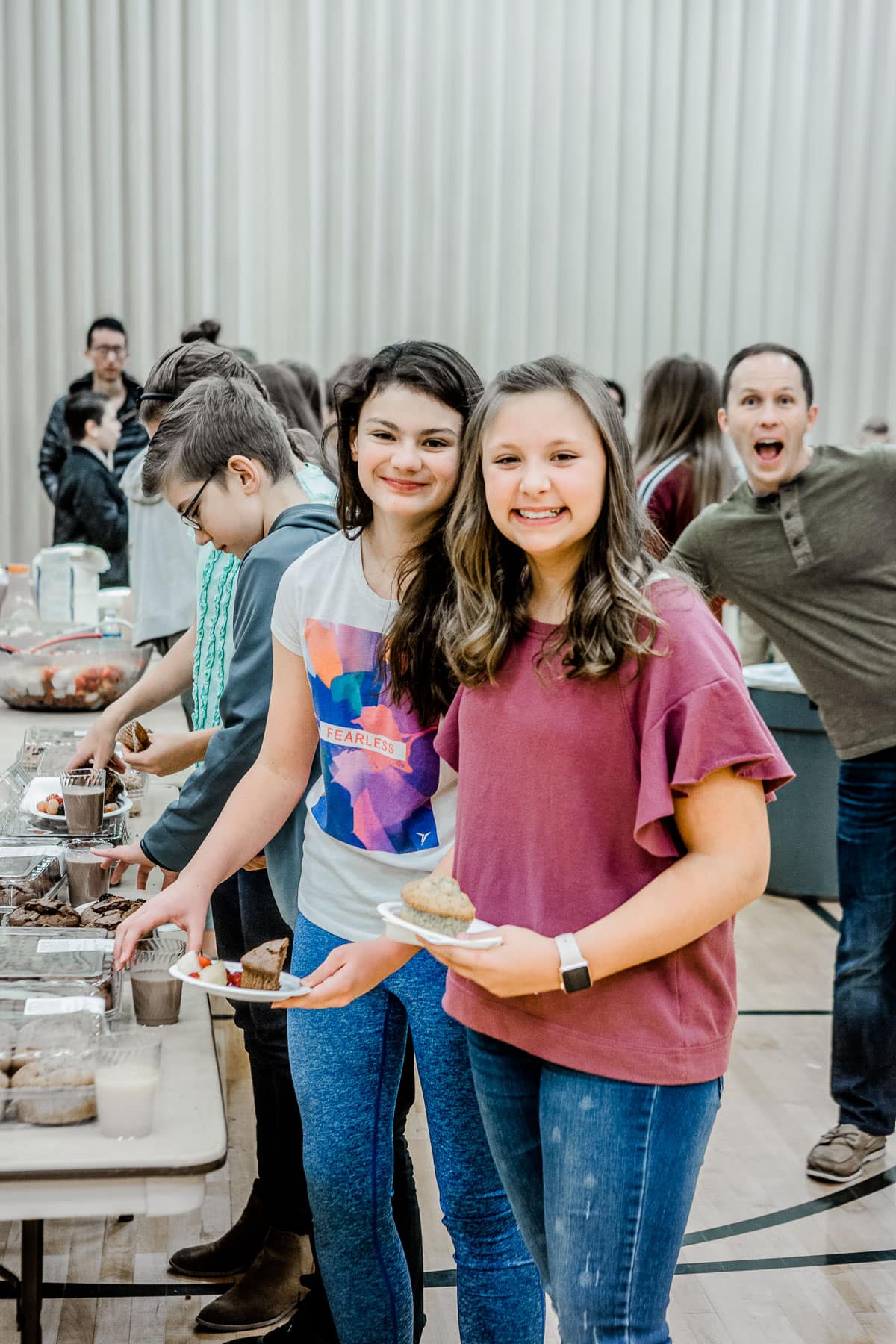 Pay for the Groceries of Someone in Line 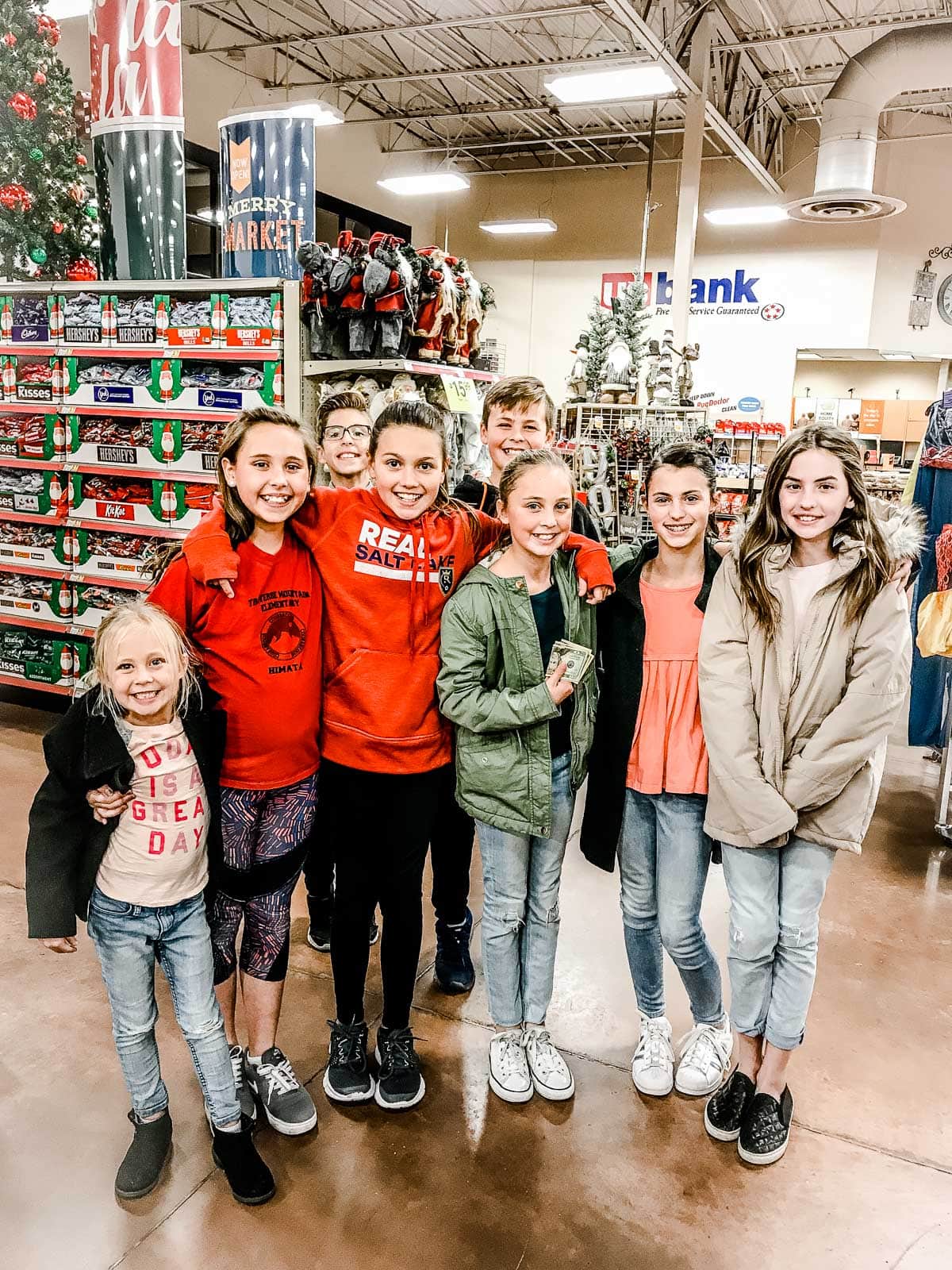 We asked our oldest daughter what she wanted to do to serve and she said she wanted to pay for groceries for people at the store. We told her to prayerfully invite friends to come with and she chose a random group of boys and girls so it mixed up the normal friendships. I loved that.

We headed to the store with cash and gave some to each group of two. They popped into line behind someone and when the person went to pay they handed over the cash. Sometimes it was just enough to help while other times it was enough to pay for everything. The kids were absolutely glowing with pure joy and excitement. They truly grew as people as customers were brought to tears over their kindness. One even shared that she had been reviewing her budget and wondering how she would ever afford groceries this month and what a blessing these kids were to her. The kids were so touched by the experience and it was worth every dollar that was sacrificed and spent. I wish you could have heard them talking on their way home. It was incredible. 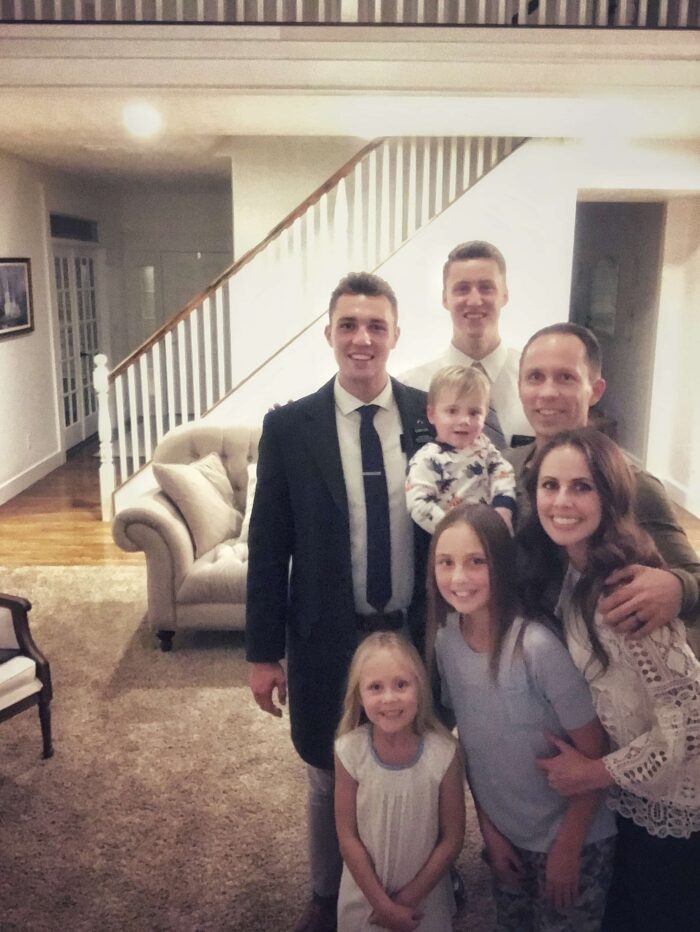 We took our family and the missionaries back to the store with our card on another occasion and as the person in front of us went to pay we swiped our card instead.

There’s always this moment right before you pay for someone, it’s almost a little awkward. You don’t want to draw attention, you don’t want to embarrass them and you hope they will let you, but then you reach forward, tap them on the shoulder and at least for me, use every bit of courage you can muster up and tell them you’ve got this one.

The Woman Facing the Worst Anniversary of Her Life

The stories we heard were so touching, one women broke down that the next day was the anniversary of her daughter’s death and this meant more to her than she could even express. Coincidence? We all know it wasn’t. She needed this and we were mean to be there. Who knows, maybe she will even one day pay it forward.

Choosing to Serve, No Matter the Cost or Effort

You don’t have to spend a lot of money to do this. Think about $5, if someone handed you that wouldn’t it feel awesome to have saved $5. The important thing is that you are touching hearts and reminding people of the good in the world. That’s what this all boils down to, it’s not about the service itself, it’s about doing something. Being the light instead of merely complaining about the darkness in the world. 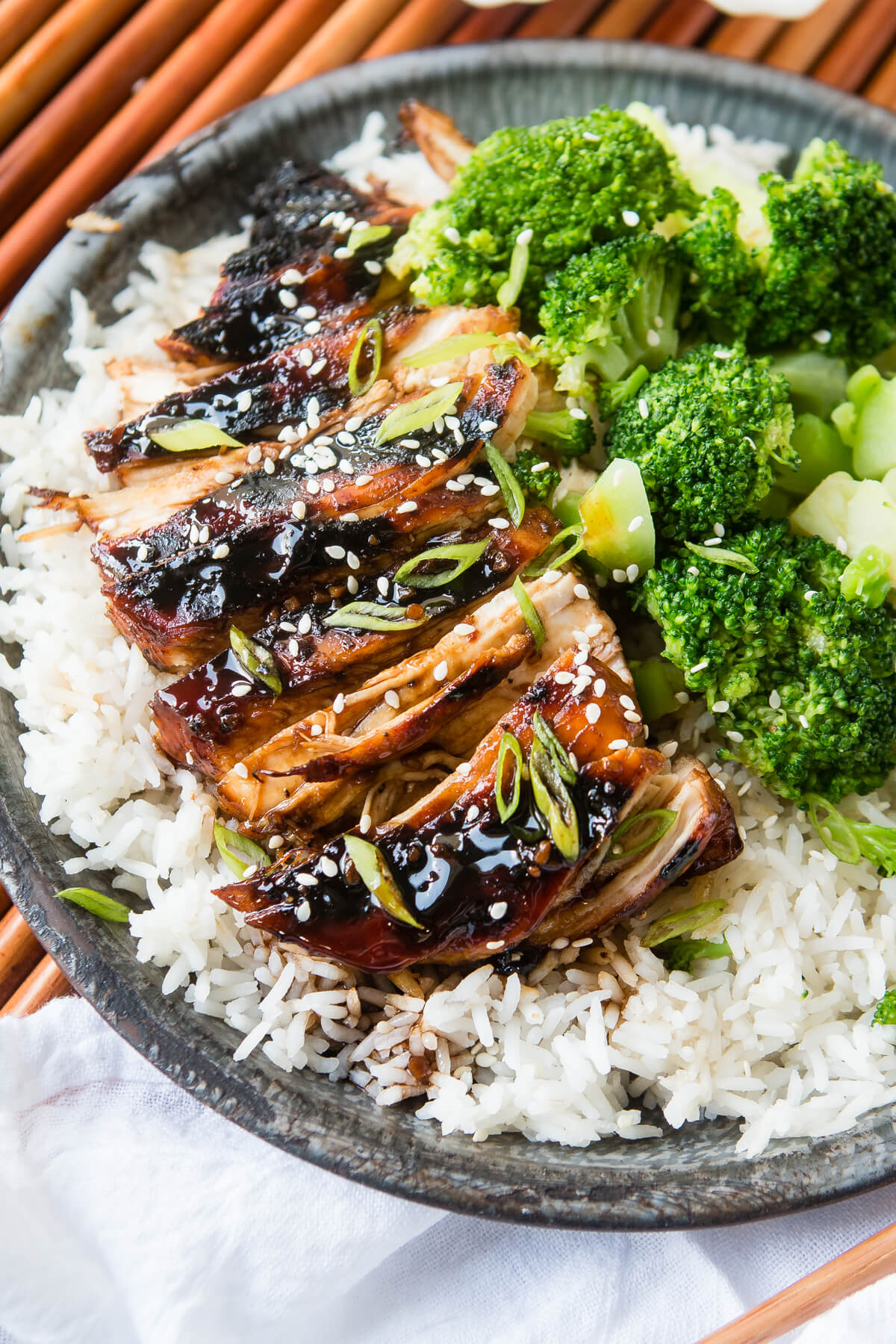 Think about if someone showed up with a meal at your house and you not only didn’t have to cook dinner but you got to stretch your groceries a littler farther. Wouldn’t that be awesome? Or what if you were struggling to make ends meet or pay for dr visits that you desperately needed but the bills were piling up. Wouldn’t a meal remind you that it’s all going to work out? It’s quite easy to double a soup recipe and pop in at a neighbor’s house.

Remember, it’s not about how big or extravagant the service, it’s about being mindful this holiday season. It’s interesting that the more we’ve served the more magical our holiday season has been. No matter how much we try to serve it always comes back three fold for our family.

I’m learning more and more that life is nothing more than continual choices. We are choosing to see into the hearts of those around us and believe in our own hearts as needed on the Earth to do and be the good that our world so desperately needs.

There’s still lots of time. Will you join us and #LighttheWorld?

Remember, download or print your Light the World Calendar and we would love to hear the stories about what you are doing.