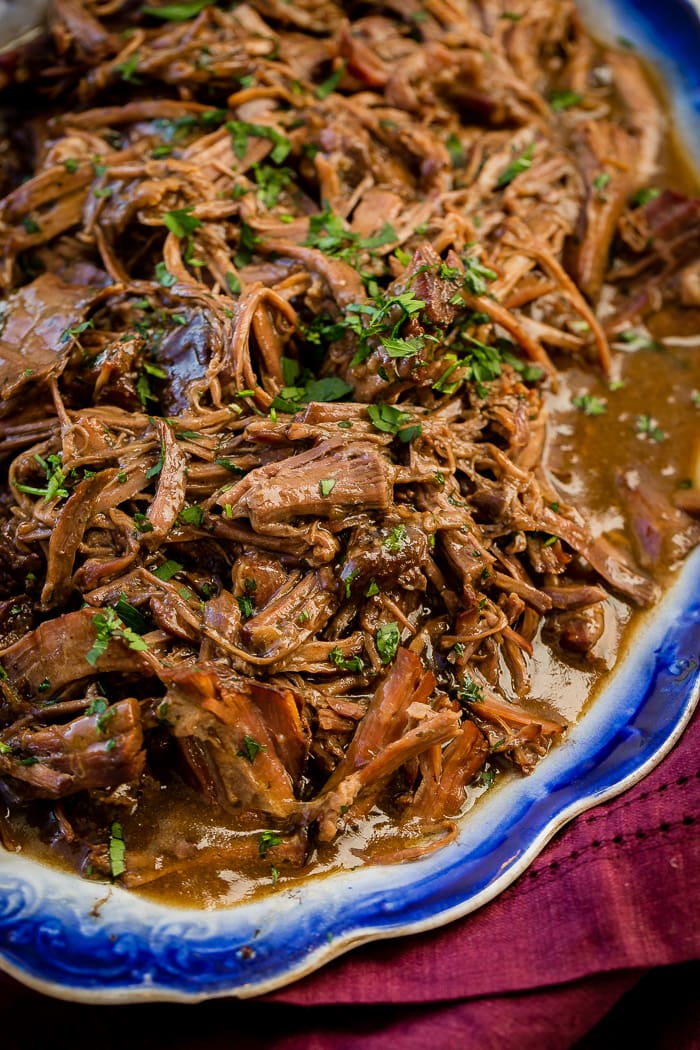 This is our new favorite slow cooker Mississippi pot roast recipe and it’s only 3 ingredients! I cannot even believe how perfect and juicy it was!!  All you need is a great cut of beef, a slow cooker, and three simple ingredients and you’ve got the best slow cooker pot roast! It’s basically a Mississippi Roast recipe, which we all know and love.

Except, making a pot roast was turning out to not be rest for me. I was trying to figure out how to make a juicy roast by searing it, marinating it, injecting it, and so on and nothing was really hitting the spot for me. So I did what any normal person would do after an extended period of failures — I gave up.

Okay, maybe everyone doesn’t give up, but I just decided that maybe a beef roast wasn’t my thing. I took up pork and it totally went well. We made carnitas, tender shredded pork and finally a juicy shredded beef. But it still didn’t taste like that classic pot roast. And the gravy wasn’t that brown gravy I wanted.

It ends up so juicy and tender you won’t even be able to lift it out of the slow cooker (we use Hamilton Beach).

And there are wonderful drippings that make the best gravy. I just serve ours with the juices, but sometimes when we serve it with our favorite mashed potatoes I’ll whisk the dripping with a little cornstarch and water and let it thicken. It’s awesome. 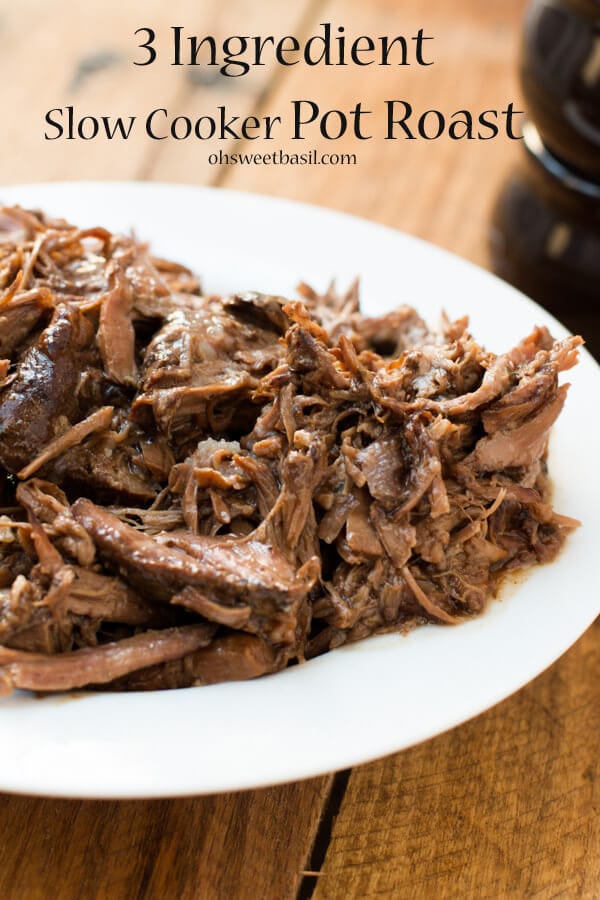 Want to know which cut of beef is best for a slow cooker roast or pot roast? We prefer a simple chuck roast, but remember to look for one that has good marbling. But not so much that it’s all over in big pieces of fat, because without realizing it you’re paying for all of that weight and will end up with less meat than you expected.

It’s truly amazing how easy this slow cooker pot roast recipe is! Here’s how you make it:

If desired, you can shred the beef after 7 ½ hours and let it cook in its juices for another 30 minutes before serving. 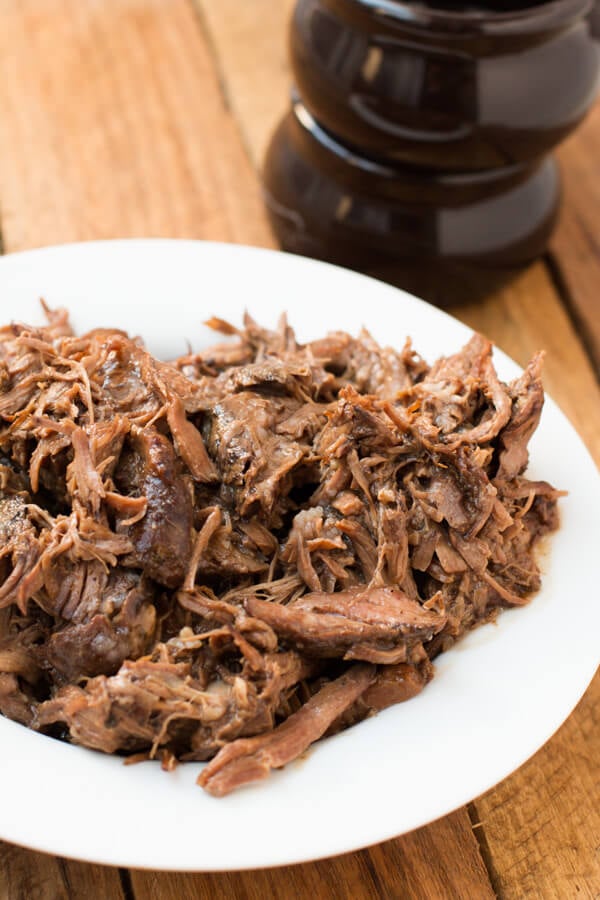 Do You Add Water for a Slow Cooker Roast?

One of the biggest questions we about chuck roast CrockPot recipe is why we don’t add any water to the roast. Maybe I’m wrong, but I feel like a lot of older CrockPot recipes wanted water added to a roast recipe, which is completely unnecessary. If you’re cooking a roast and looking for moist, fall apart meat, then adding water is just going to boil the meat, and no one wants boiled meat.

Can I Freeze Pot Roast?

Yes, this slow cooker pot roast freezes very well. Once it’s cooled completely, shred the pot roast and pack it into freezer bags. Spoon some of the juices into the bags as well. If desired, you can freeze the juices in freezer bags and use them to make gravy in the future. 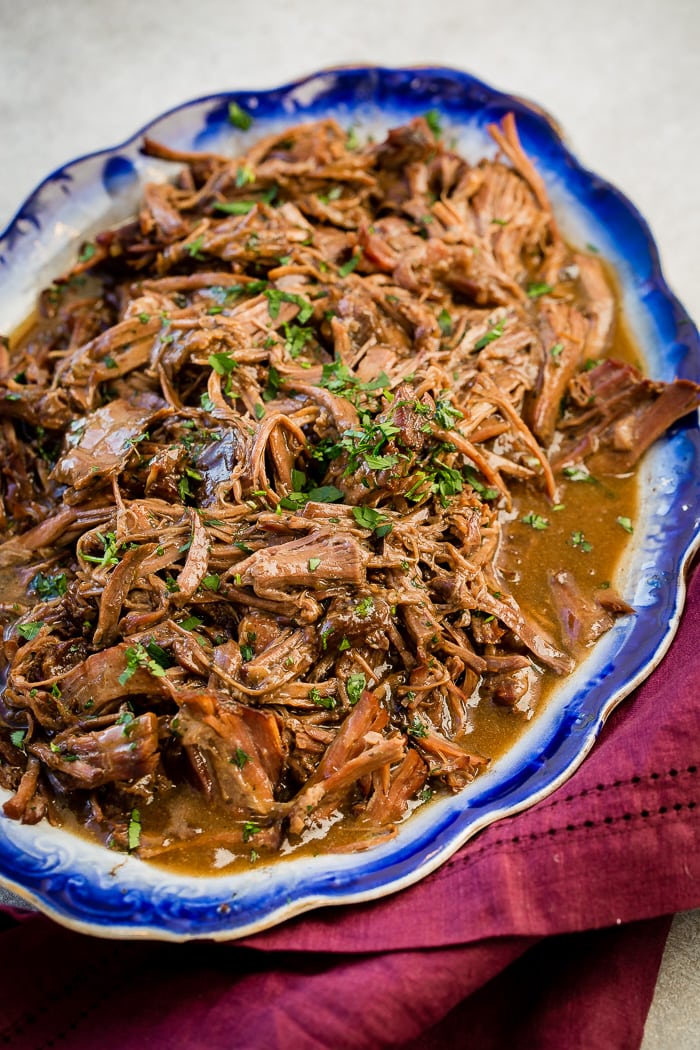 Many have been told to first heat up a skillet and brown the meat on each side in order to seal in the juices. That’s completely false. Browning meat is to give that color and caramelized flavor to the meat, but unless you’re braising it’s really going to disappear a bit in a slow cooker, so I don’t see any need to brown a roast.

The real secret to a roast is to cook it low and slow. In an oven, you’re looking for 225-250 degrees Fahrenheit, and on a slow cooker you want to use the low setting. We never cook a chuck roast or even a pork butt for anything other than low temperature for 8 hours. I promise, it will fall apart.

You technically can cook this easy slow cooker pot roast for 4 hours on high if you’re short on time, but your roast won’t be anywhere near as fall apart tender as it’d be if you let it cook on low for the full 8 hours. 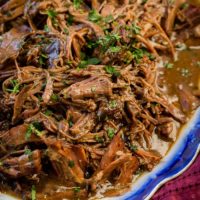