Skip your local Thai restaurant when you’re craving Thai Peanut Noodles with Chicken and make it at home instead! Thai peanut sauce and noodles couldn’t be simpler to make! 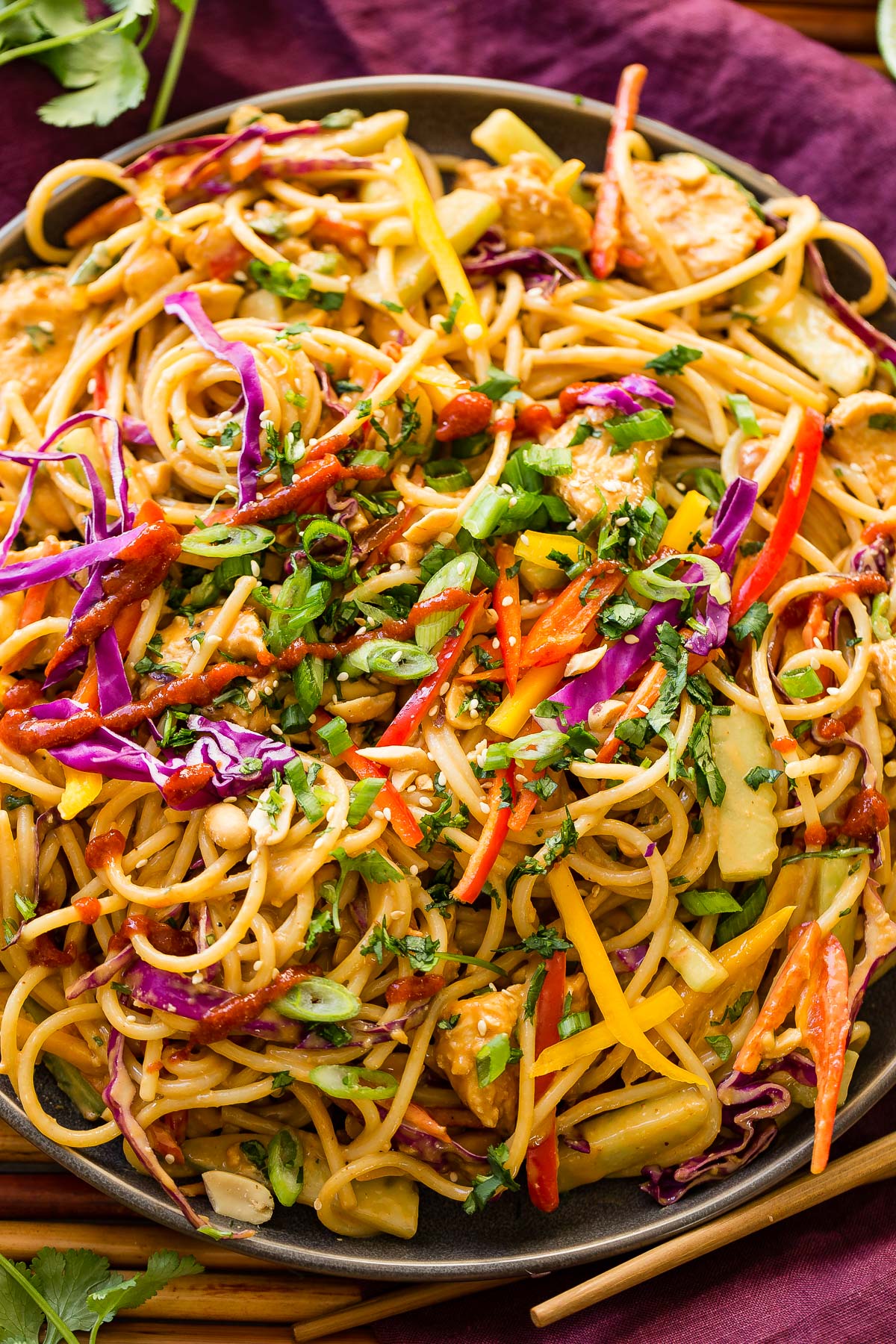 I’ve resisted posting too many Asian inspired recipes on here because of one little secret: I don’t do spicy. It seems like many favorite Asian recipes have a good kick of heat to them, and I’m not a huge fan of that. But these Thai peanut noodles with peanut sauce are perfect for those that like a good hit of Sriracha and those who don’t. Thai peanut noodles with chicken is my new favorite!

This Thai peanut sauce had me all over the place when I first started testing recipes. Some recipes call for coconut milk, fish sauce, and curry paste, while others stick with peanut butter and sriracha. So what’s the right way?

The more I researched, the more I found that there were a few ingredients in common and others that were basically at-home cooks trying to wing it. Coconut milk makes for a creamy sauce, but it also totally dulls the peanut butter, so that was an easy out.

Sriracha or chili flakes appeared often, but in the end sriracha won because we liked how it came incorporated into the sauce so evenly.

Fish sauce sounded like it must be a shoo-in as many Asian recipes use it, but again it seemed to overpower the other flavors so we got rid of it. Soy sauce or tamari, its gluten-free friend, were a better choice for that salty flavor without the fish flavor. Plus, we liked how it darkened the sauce and smoothed everything out.

Vinegar and sesame oil were back and forth in recipes, but we missed that subtle flavor when it was gone so we added it back in. 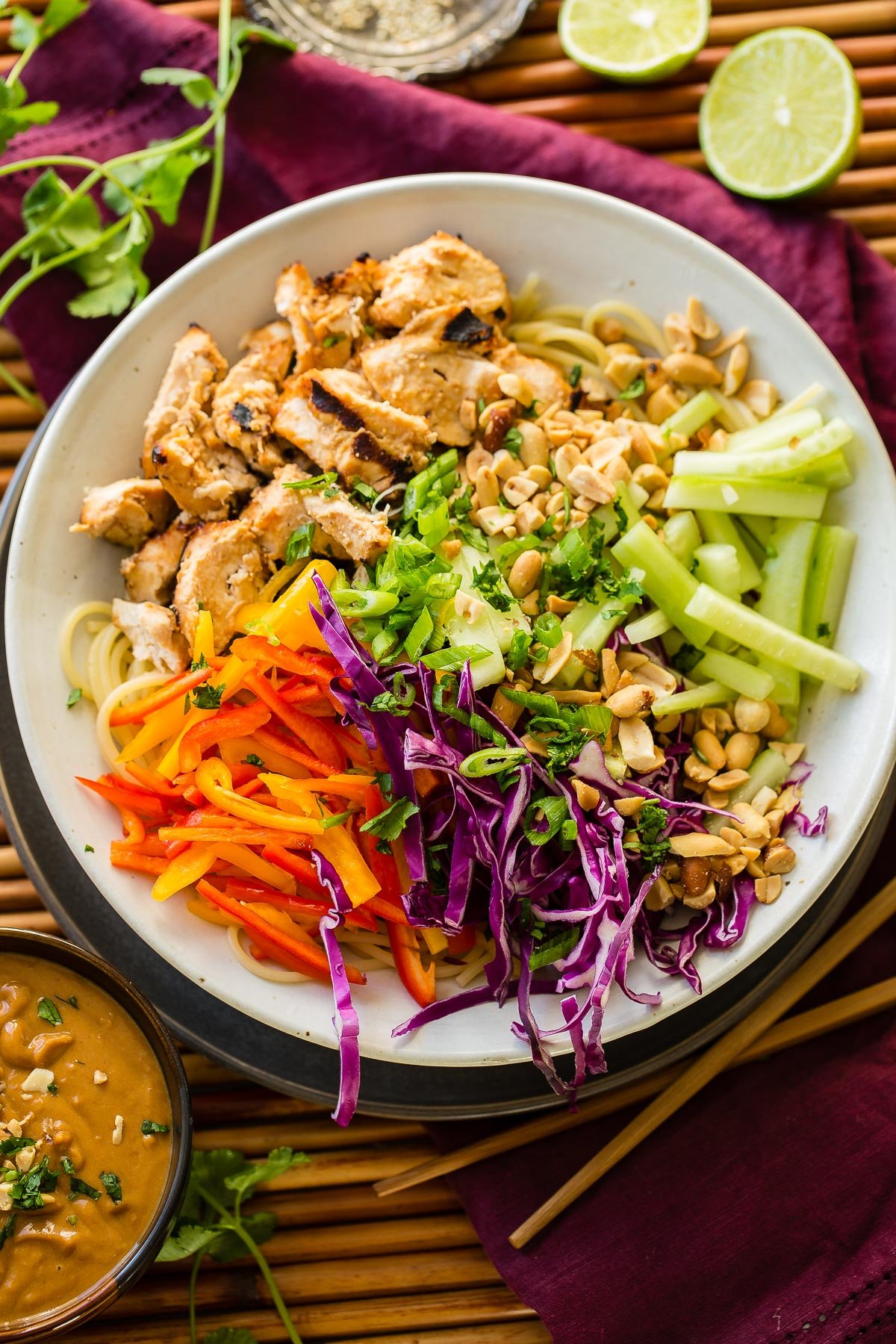 Here’s what we ended up with: ginger and garlic for sure, peanut butter and sriracha for the basic sauce flavors, and a punch of lime juice to brighten everything up. We stuck with warm water instead of coconut milk to thin things up a bit and you could certainly add more if you’d like.

Alright, but what about the Thai peanut noodles? Well, the noodles were a little tricky too. It’s much harder for us to find a good Pad Thai, Rice Noodle, or other Asian noodle so we had to look for one that would hold up to the savory sauce but not be so big and fat that the sauce ends up lost. We ended up using Angel hair pasta or spaghetti, and while I’m sure there are better options this was the most convenient and appetizing for weeknight Thai peanut noodles.

Ahhhh, the Thai peanut chicken needs a moment as well. You see, grilling or baking chicken and then dressing with a sauce fell pretty flat. The sauce didn’t stay on the chicken and the flavor was lacking. You could totally tell it was a plain piece of chicken with a little sauce. We decided to marinate the chicken in the homemade peanut sauce, and although it is absolutely freezing outside we had no choice but to turn to the grill.

Marinating penetrates the chicken all the way through so every bite has a wonderful blast of that irresistible peanut sauce.

The grill brings that extra smoky, enhanced flavor to the chicken and those little black grill marks not only make the meat more appetizing but it really does take the meat to a new level. 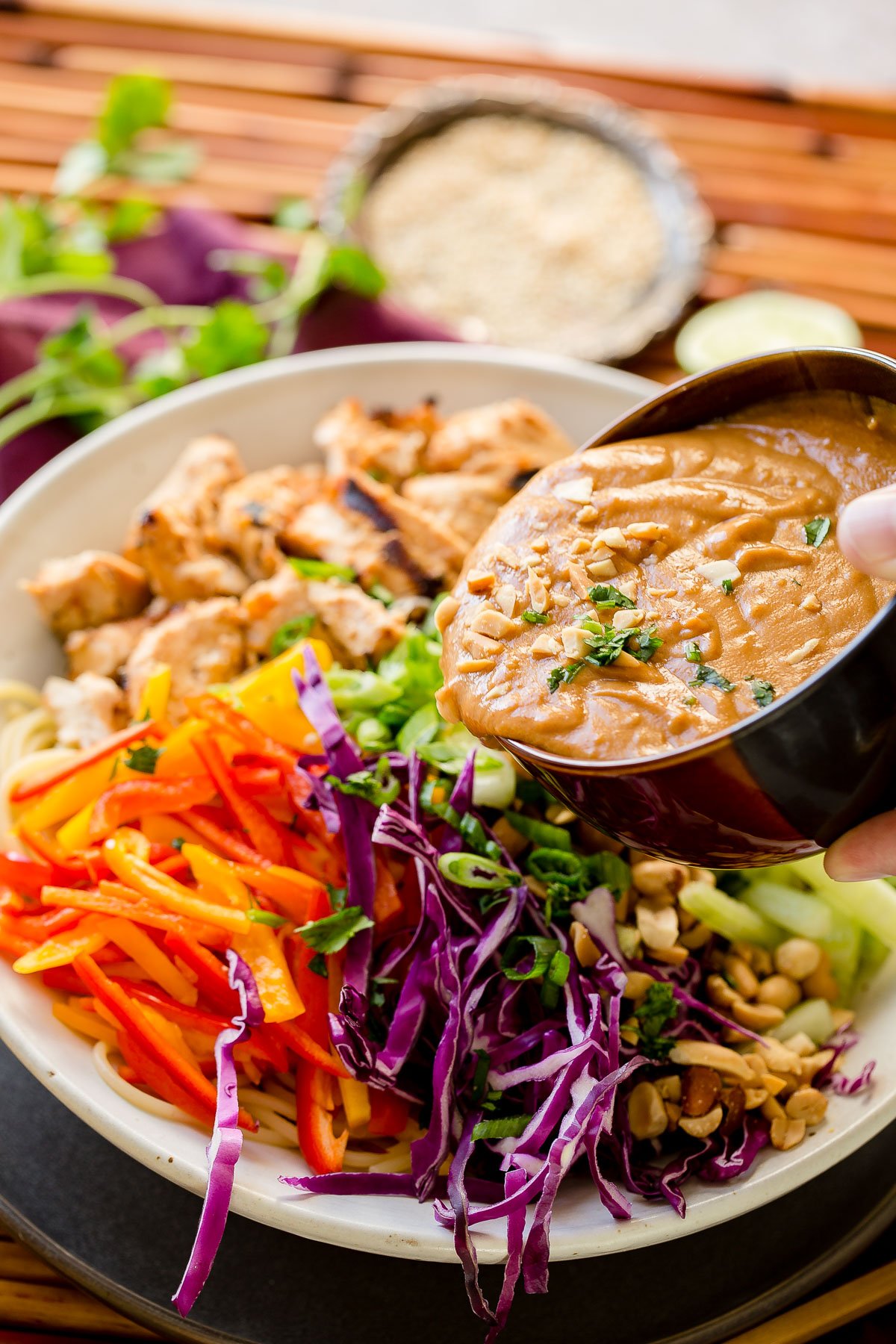 For the Thai peanut noodles and peanut chicken, you’ll need:

And to make the easy peanut sauce, you’ll need:

Can I Omit the Peanut Chicken?

If you don’t eat meat or are simply in a rush and don’t have time to marinate or cook the peanut chicken, you’re welcome to omit it. You’d be left with a delicious Thai noodle recipe regardless.

Just note that by omitting the chicken, you’d wind up with lots of leftover peanut butter sauce. So, you can either halve the sauce recipe or save the leftovers for later! 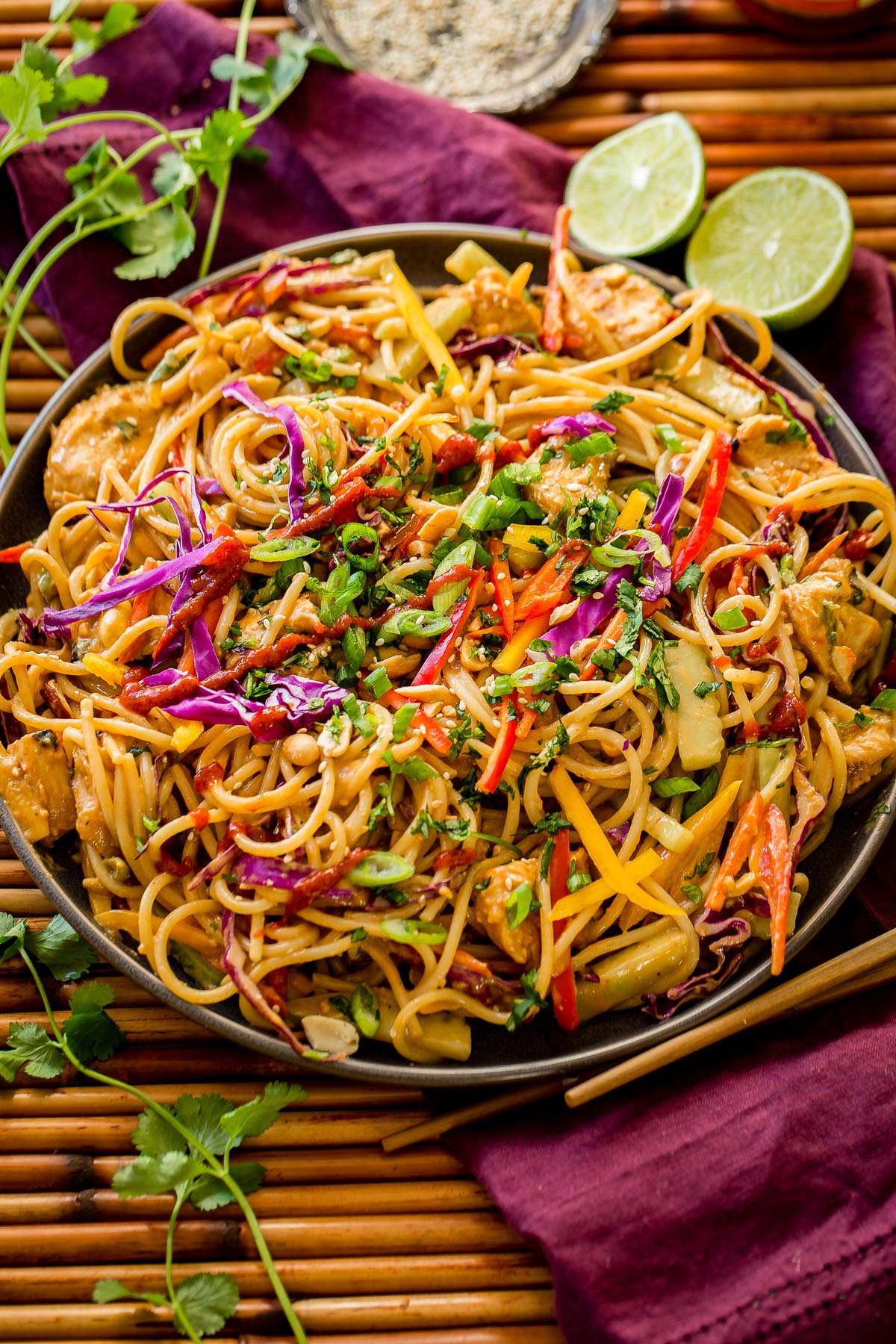 How to Make Thai Peanut Sauce Noodles with Chicken

What Grill Pan Do You Recommend?

If you don’t want to venture outside, please promise me to use the best grill pan by Lodge. It’s a cast iron grill pan and its ridges are deep enough to actually leave marks, but not so high that the meat takes forever to cook. Plus, it’s only $12! That’s a major steal.

We just found this Lodge Cleaning Kit with a scrub brush, etc. to keep your pan looking and working great without all of the elbow grease. It’s like $20 but it really is worth it. You shouldn’t be caring for your cast iron like your other pans, so buying a couple of items meant for cast iron is a must.

How Long Does Peanut Sauce Last?

If stored in an airtight container in the fridge, the Thai peanut sauce will last up to 2 weeks. 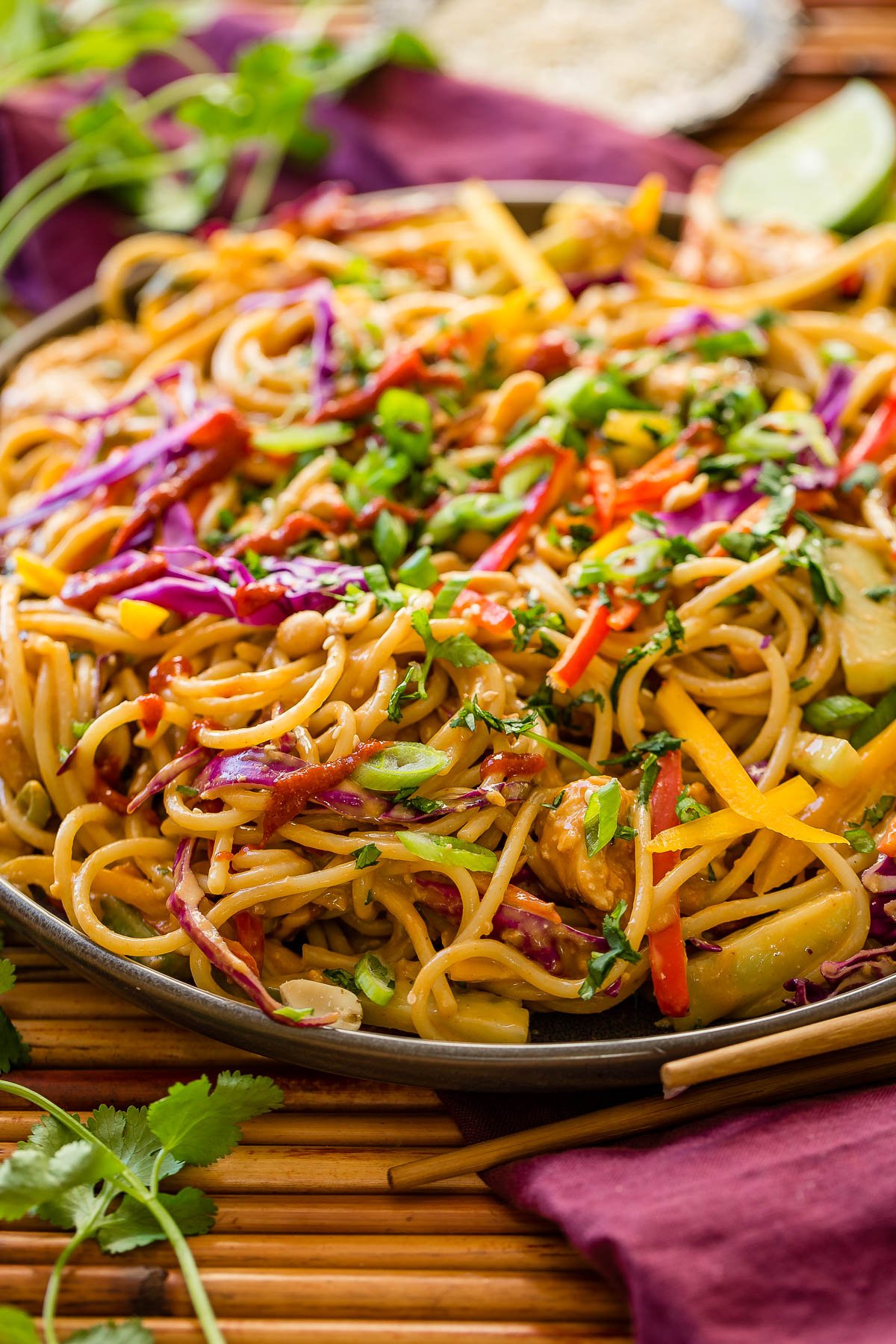 A quick note: ginger is best if it’s fresh in this peanut sauce recipe, but figuring out how to peel ginger can really distract some people from wanting to use it. We recommend peeling ginger with a spoon, not a knife or potato peeler. Just scrape the spoon over the ginger and the peel will come right off and then use a fine holed cheese grater to grate it, or you can mince with a knife.

I should also note that we prefer marinating our chicken in the Thai peanut sauce overnight, although an hour will work if you’re in a rush.

I also like to prep all of the veggies once I’ve set the chicken aside to marinate. I pop the prepped veggies into a 3 compartment storage container. I’ve already prepped the meat, so I just figure I’d might as well take 5 more minutes to prep the veggies, and the storage container keeps everything fresh without blending flavors. 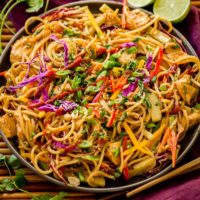