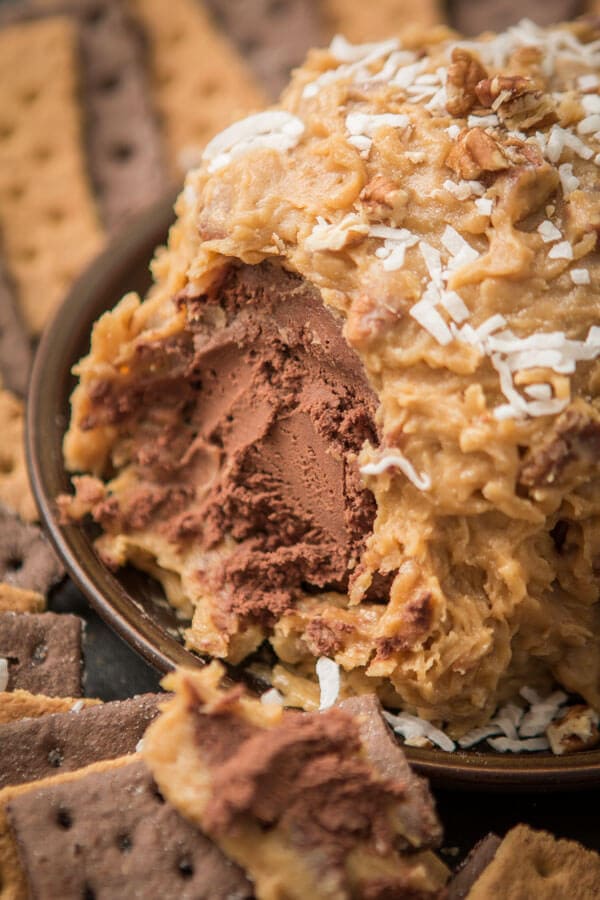 We had a tradition for birthdays that Cade and I continue in our home today. Mom would let us kids pick our own birthday dinner and dessert every year which, and this truly seems a little silly now, but it made me feel so special that I got to decide what was for dinner. 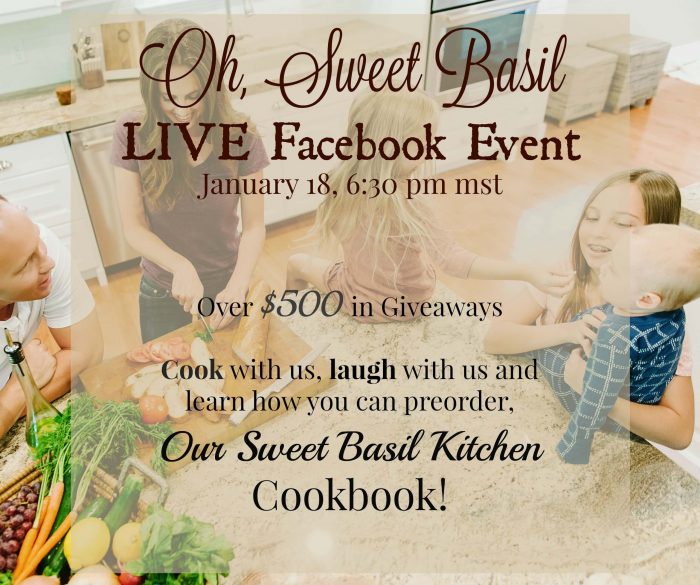 Our brand new cookbook that’s coming out March 7th is going to have a totally from scratch and dare I say, even better recipe for caramel brownies so get really excited for that. In fact, not only can you preorder it RIGHT HERE, but you can also join us tonight at 6:30 pm mst on Facebook where we will be having a Facebook live launch party for the book! 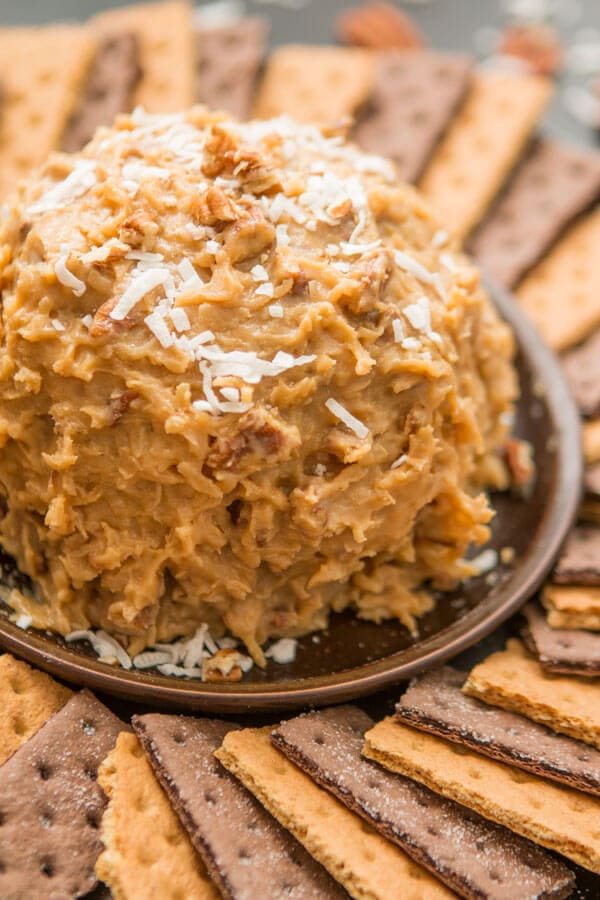 I’m getting off subject, back to birthdays and German chocolate cake cheese ball recipes. Ok, so my older sister always requested German chocolate cake which, given that we are quite far apart in age, as a very little girl was like torture for me. YUCK! I didn’t want a fancy cake, I often chose Roasted Chicken with Mashed Potatoes and Gravy and Caramel Brownies for dessert.

Times obviously change and I’ve embraced more foods as I’ve gotten older. When we signed on for another year with Fisher Nuts I let Cade choose a recipe he wanted to do, he went savory with pesto tarts while I wanted to give a little nod to the past with this chocolate cheese ball covered in that classic German chocolate cake coconut frosting.

What is German Chocolate Cake Frosting? 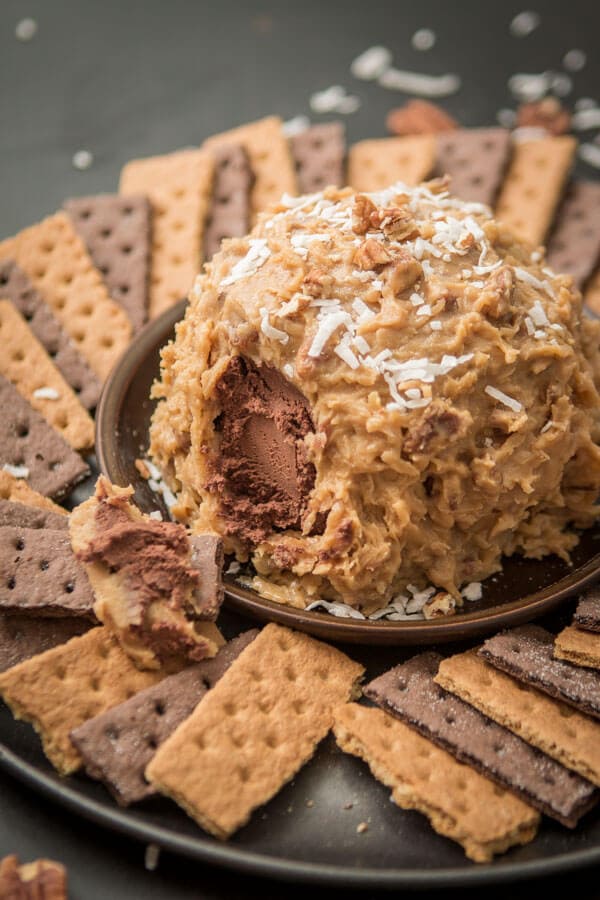 How Long Can Cheese Ball Last?

The average homemade cheese ball made from cream cheese and no veggies, fruit or meats lasts around two weeks in an airtight container, when refrigerated at 40 degrees Fahrenheit or below.

Commercially prepared cheese balls may contain preservatives such as high amounts of salt that will extend their shelf life.

The cheese ball is really easy to make but it will need some time to chill in the fridge or freezer so it firms up enough for the frosting. As always, make sure you let the cream cheese brick sit on the counter for a good 15-20 minutes so it can soften and then beat it alone first so it’s nice and smooth otherwise you’ll end up with bumps in your cream cheese because it wasn’t soft enough.

Add the dry ingredients and beat until smooth, followed by a cup of melted chocolate chips. We love milk chocolate chips but in a dessert like this it really is best to use semi-sweet chocolate so that the whole dish doesn’t end up overly sweet. 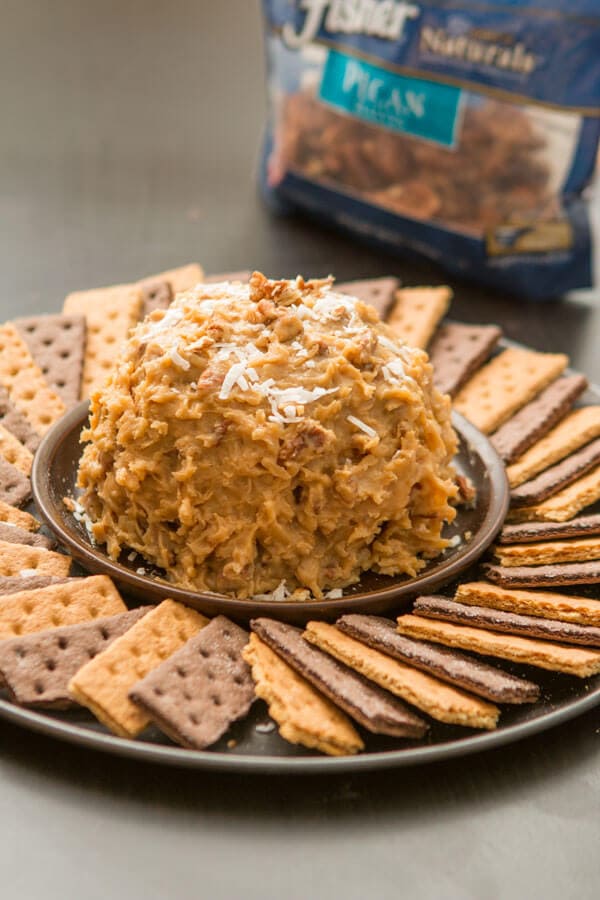 The frosting usually uses an evaporated milk, but we have found that sweetened condensed milk gets a little more caramel-y and sticky which is perfect for something like a cheese ball as it will stay in place.

Of course, the pecans are kind of a big deal too. You may think you don’t like pecans or walnuts because they are bitter. I’ve said that more than once, but then I learned they are actually only bitter when there are preservatives or they are going bad. It’s why we’ve started only using Fisher Nuts because it’s the only package I can count on the nuts being fresh and preservative free. Toast them in a pan after you’ve given them a rough chop and set aside as you make the frosting. 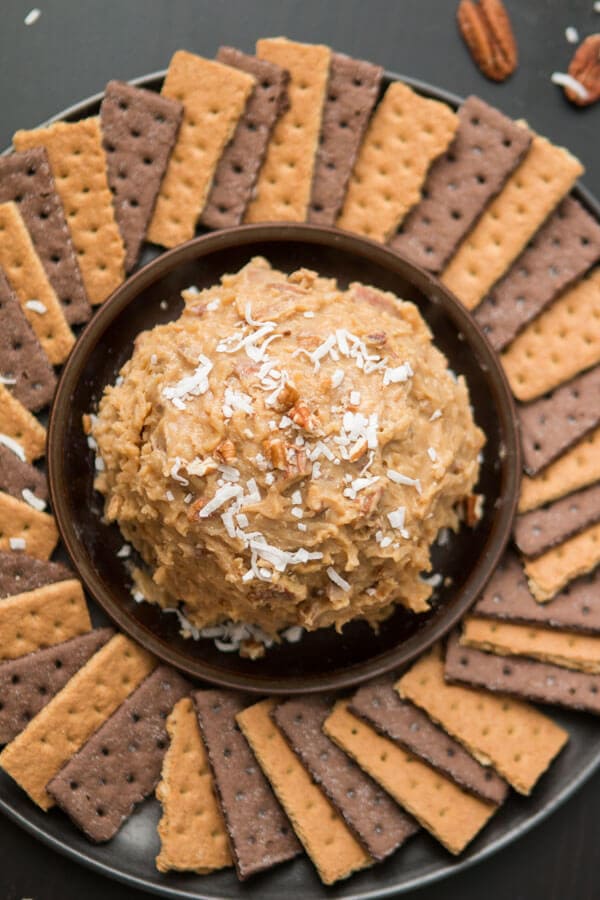 The coconut frosting for German chocolate cake needs to be whisked together before you start to cook it otherwise the eggs will curdle. Then slowly bring it to a simmer and never allow it to boil or you will scorch the frosting or curdle those eggs. Just be patient and stir for a good 8 minutes and then it will be thick and crazy tempting to swipe a lick of. I did. It’s not worth it and I’ve got a horribly burned tongue to prove it.

Can Cream Cheese Ball be Frozen?

Some cheese balls freeze well, and others don’t make it through the thawing process.

It depends on the ratio of cream cheese to cheddar in your case.

The more the cream cheese, the rougher time you’ll have defrosting without it disintegrating. 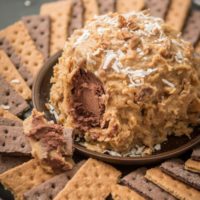 Want brownies but don’t want to worry about baking and cooling? Brownie batter dip to the rescue. 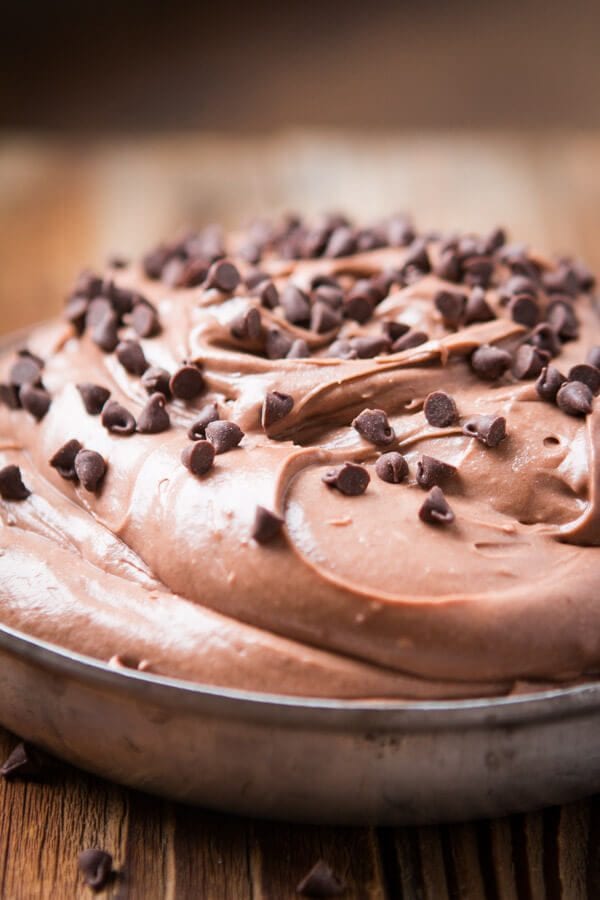 We created this recipe with the intentions of serving it with graham crackers but on a whim tried it with salty pretzel crisps and oh my goodness, it’s amazing! 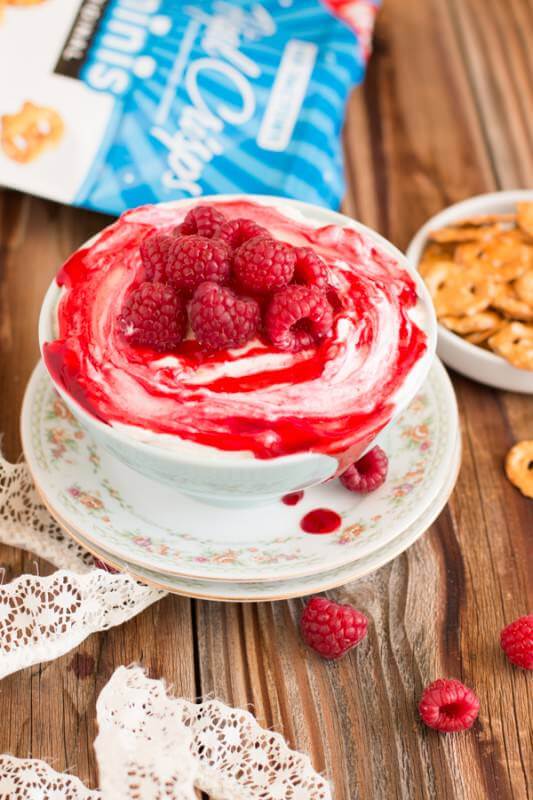