Sour Cream Cinnamon Swirl Pumpkin Bundt Cake is a sweet and tender pumpkin cake with a cinnamon roll-like swirl and a delicious frosting. 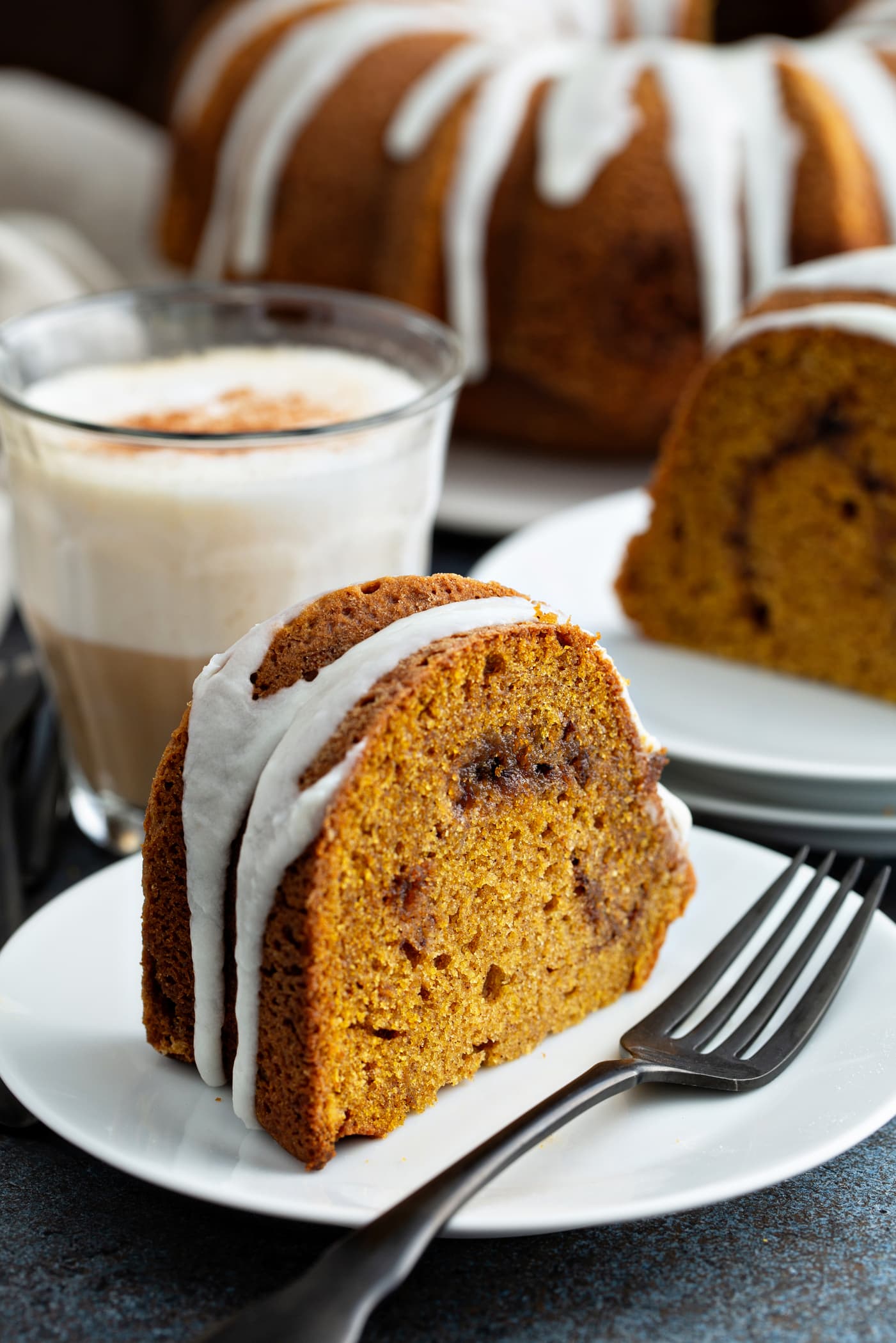 Bundt cakes seem to be one of the must steady desserts of all time. I don’t remember eating a bundt cake a single time growing up, but everyone else does. Everyone seems to have a recipe from mom involving a bundt cake, especially a pumpkin recipe, but I don’t feel like I missed out at all. I had Mom’s Caramel Brownies made with Cake Mix. 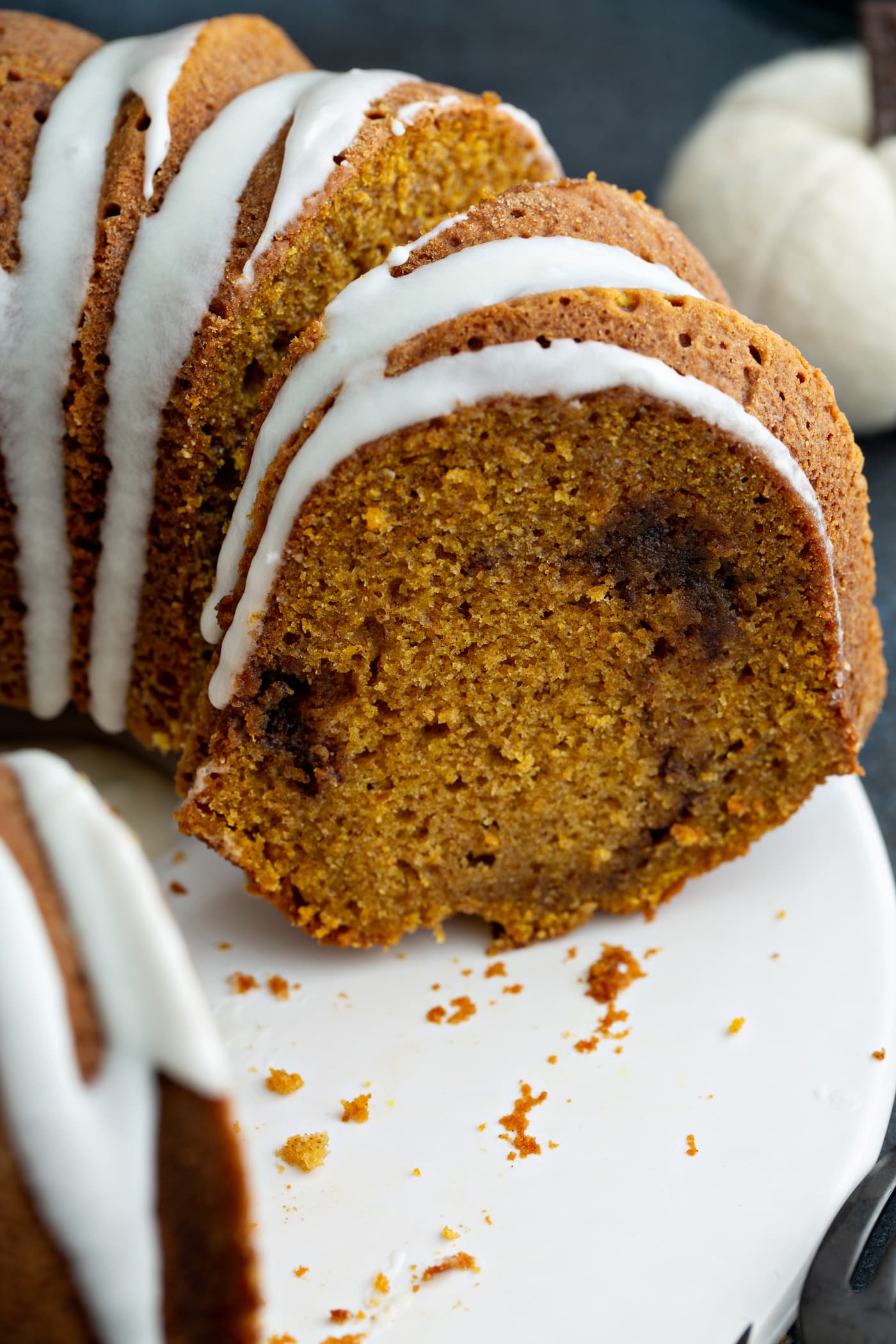 Alright, other than, My Big Fat Greek Wedding what do you know about bundt cakes?

I thought for sure this was some crazy old recipe, but it turns out it’s a 50’s and 60’s thing. No one even knows why the T was put on the end of the word.

A bundt cake has a little bit different different texture, somewhere between a quick bread and pound cake. It’s made in a bundt pan which allows air to circulate and creates that unique shape.

Bakers who struggle with cake usually have an easier time with a bundt cake. 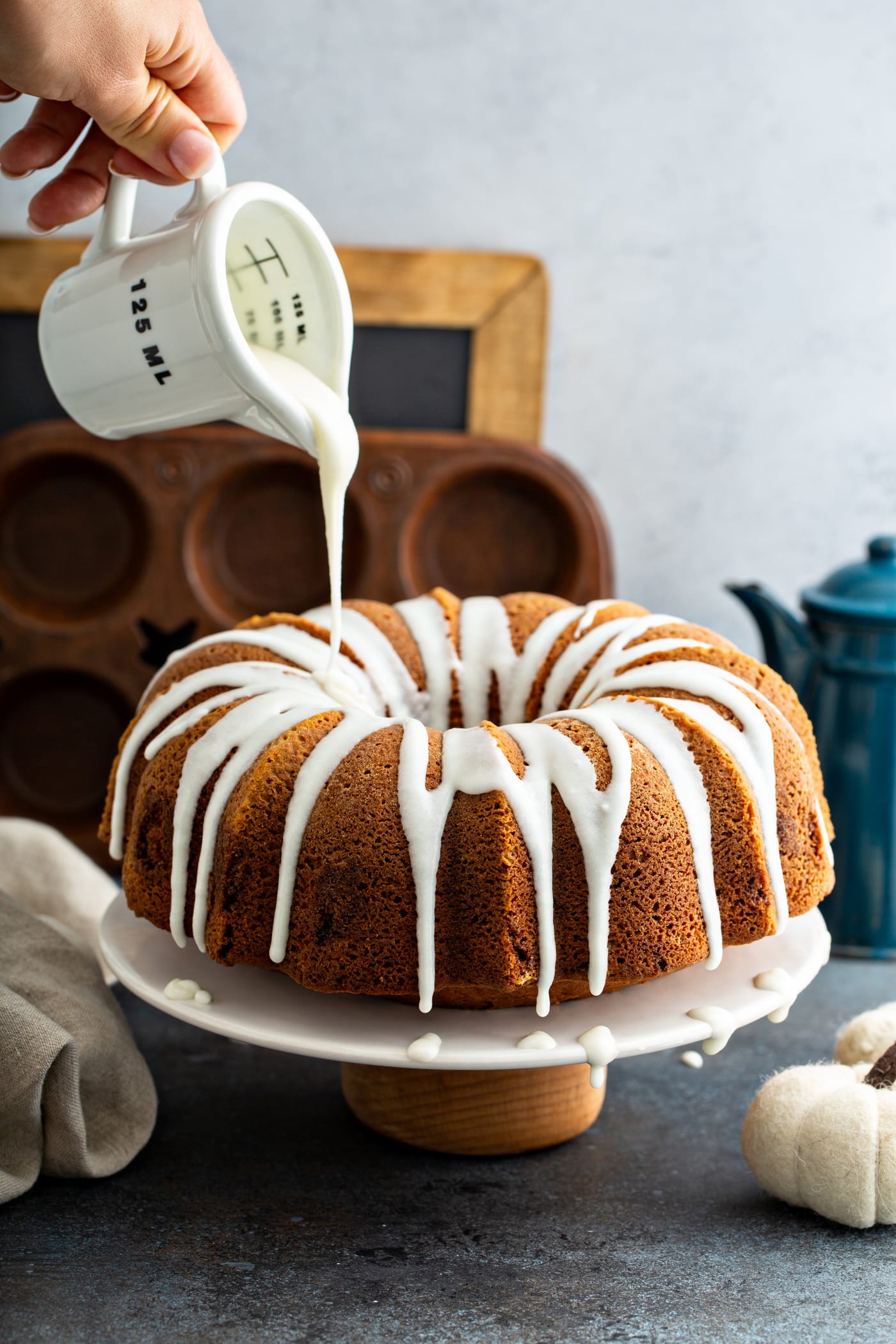 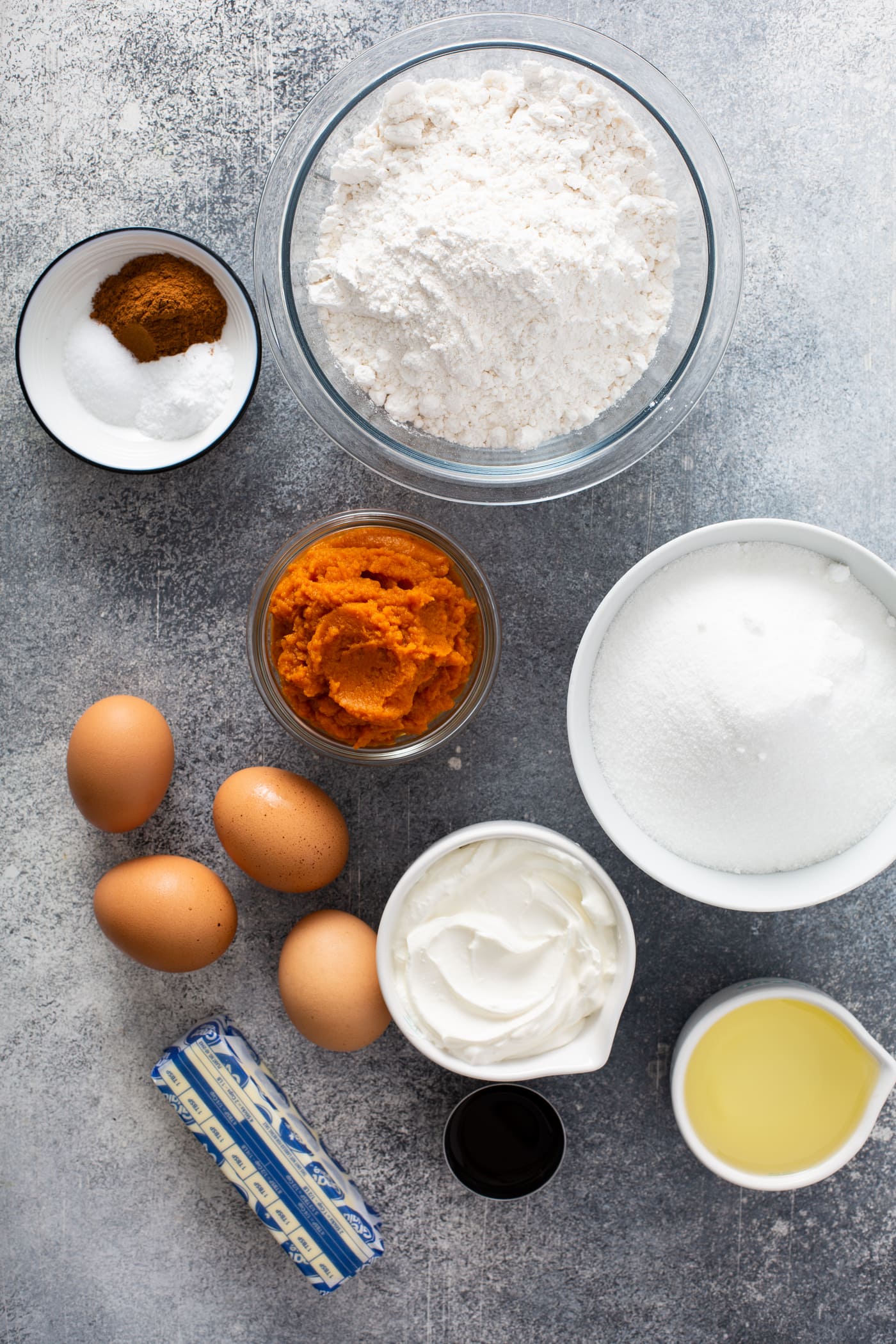 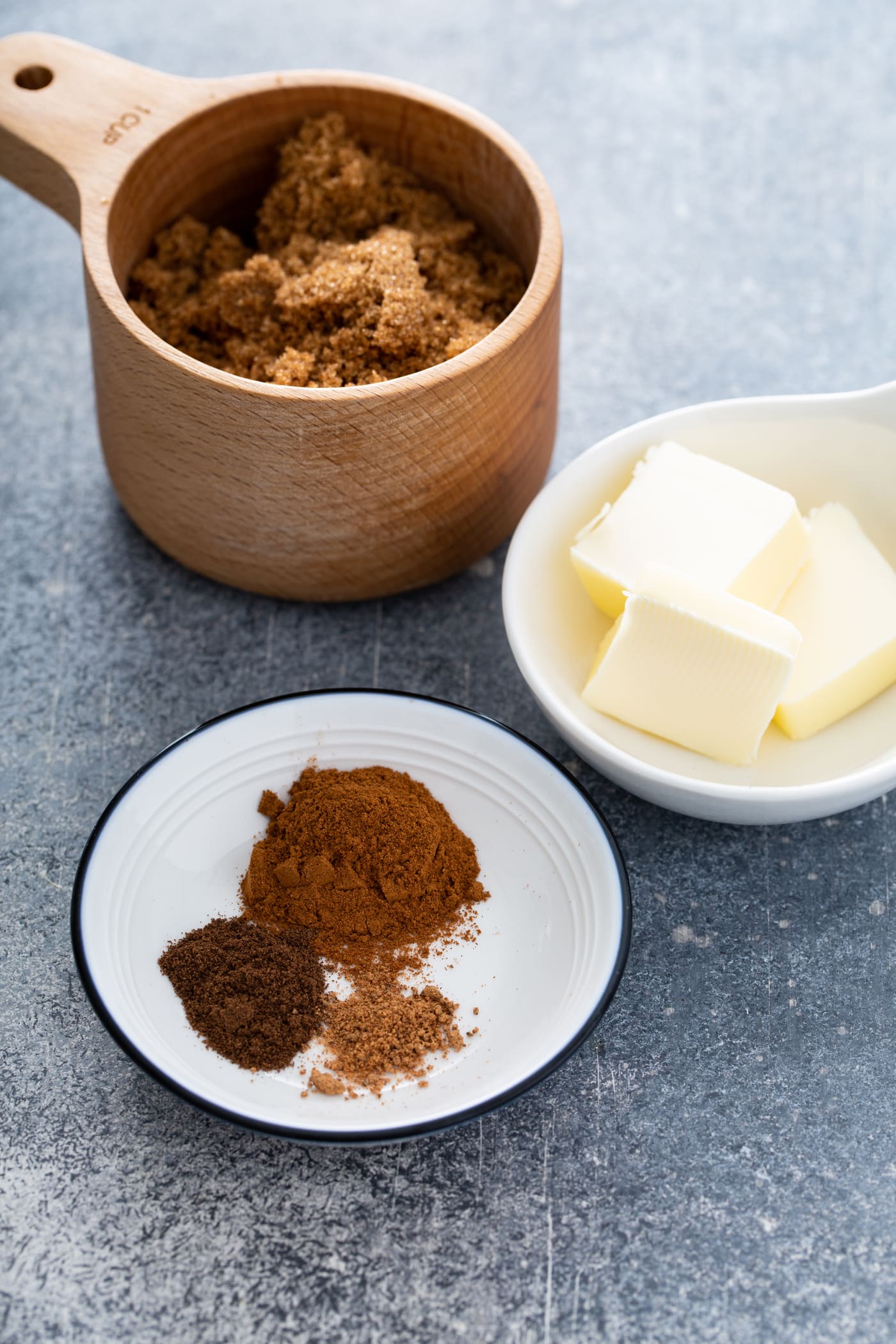 You’ll make a quick and easy cinnamon mixture that is to be swirled through the cake. A cake with a little swirl to enhance the flavor and give you a small texture change will give you a flavor explosion you will love! 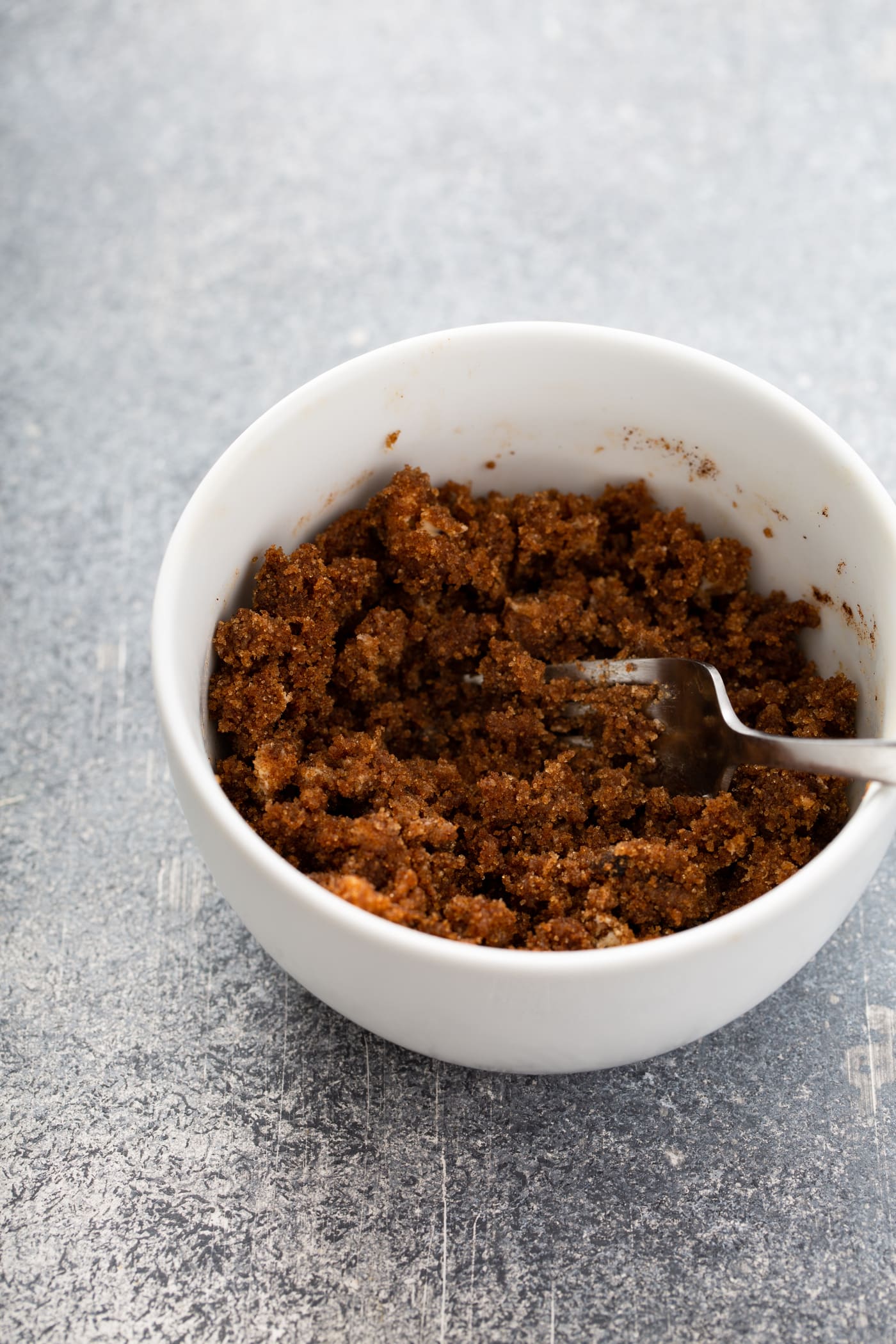 It’s best to make the brown sugar swirl ahead of time so that when the cake batter is ready you can speed through the rest of the baking. 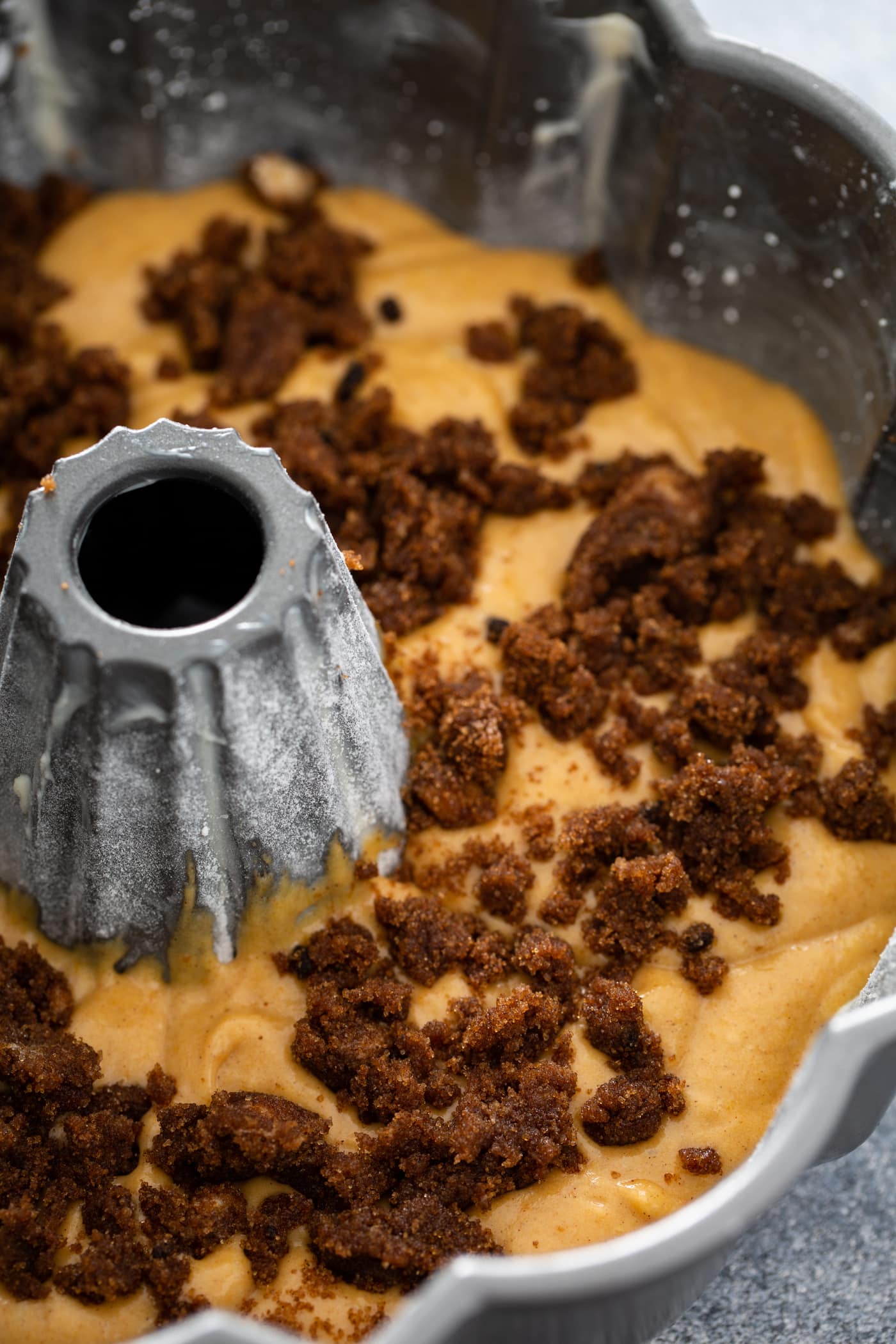 I mean, who the heck needs to bake a cake now?! Doesn’t that look delicious?! Is it weird that I want to take a spoon to it?!

How to Make Pumpkin Bundt Cake 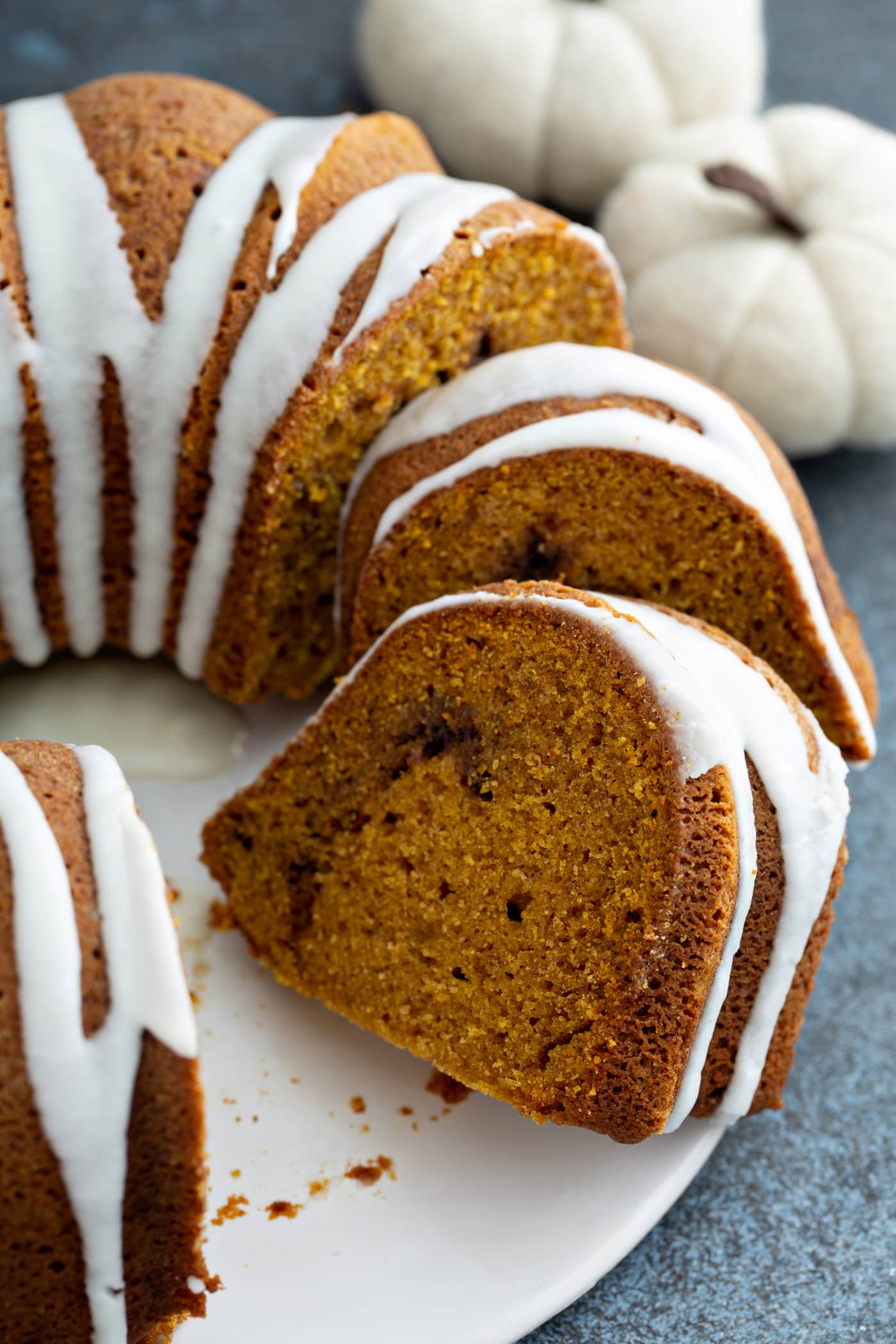 The Biggest Mistake with Bundt Cake

Why is your bundt cake tearing coming out of the pan?

I know you greased it well.

I know you let it cool.

But you forgot to flour it. 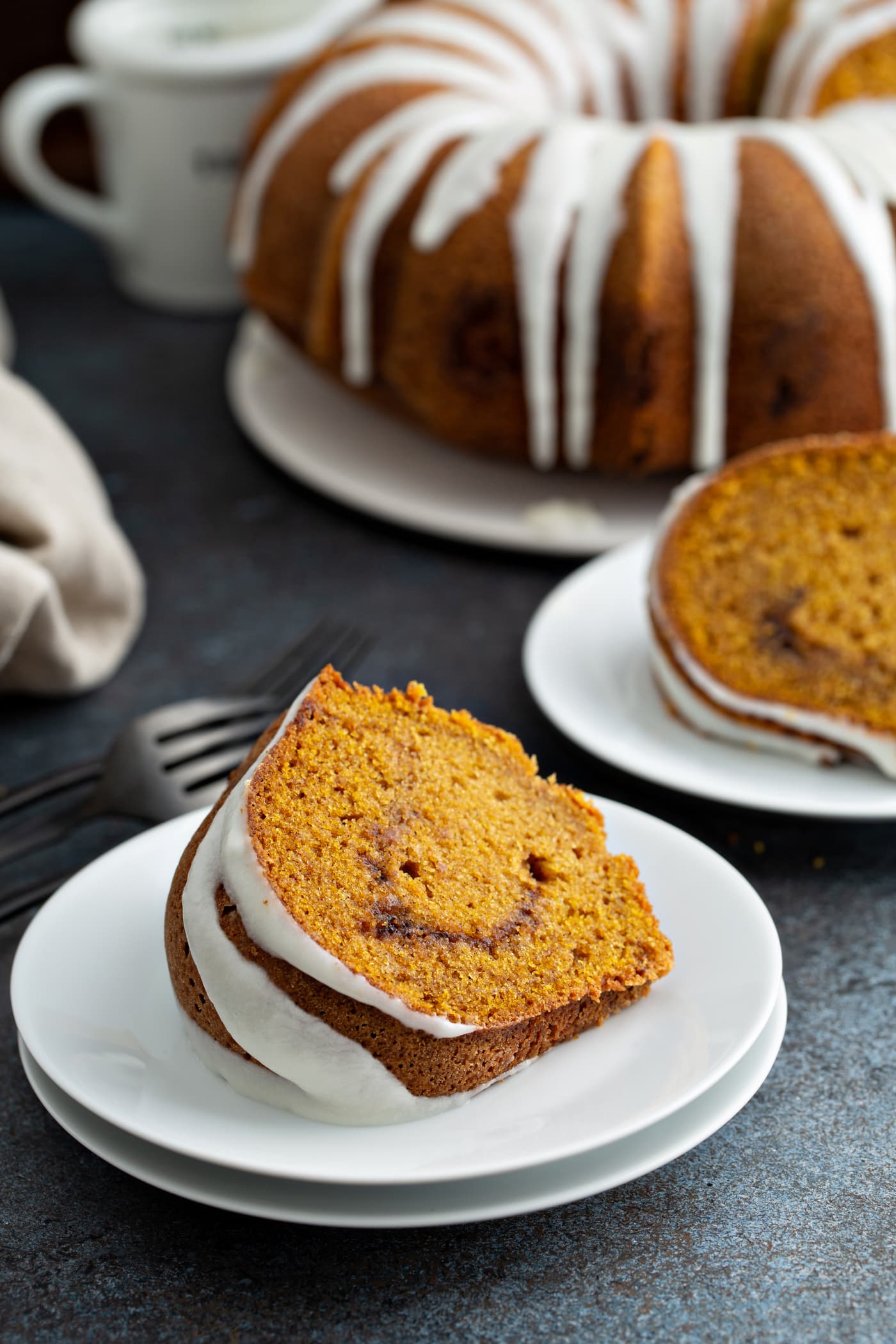 How to Flour a Pan for Cake

Spray nonstick spray in the bundt pan, turning as you go to ensure that all sides are covered.

Dump in about 1-2 tablespoons of flour and while tilting the pan in a circle, continue tapping the sides.

Pour all excess flour into the trash. 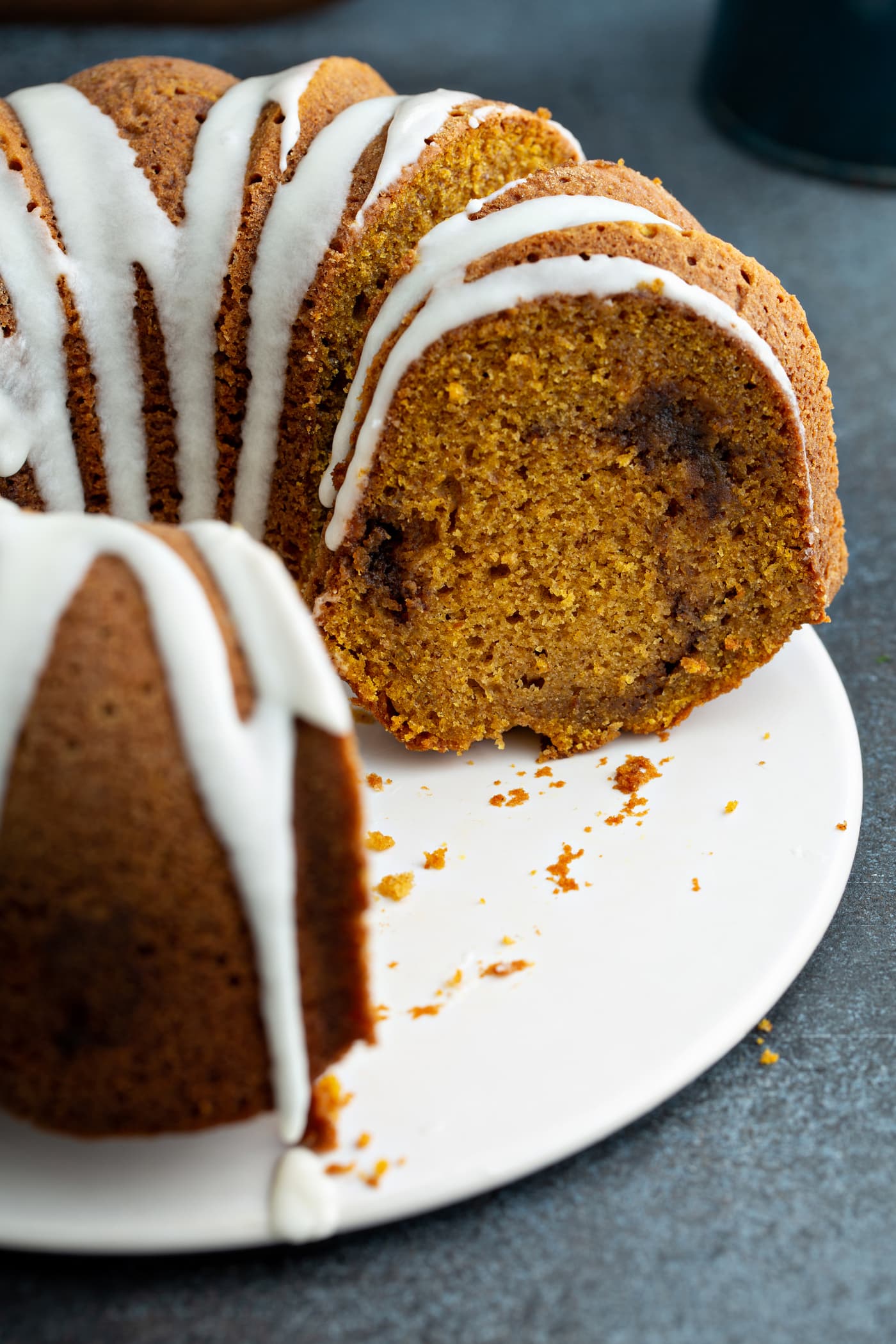 What Is The Difference Between a Bundt Cake and a Regular Cake?

A bundt cake has decorative sides and top and a hole in the middle. Bundt cakes are usually dense, moist cakes.

Bundt cake is usually topped with a simple glaze instead of frosting. But hey, I will take it either way. 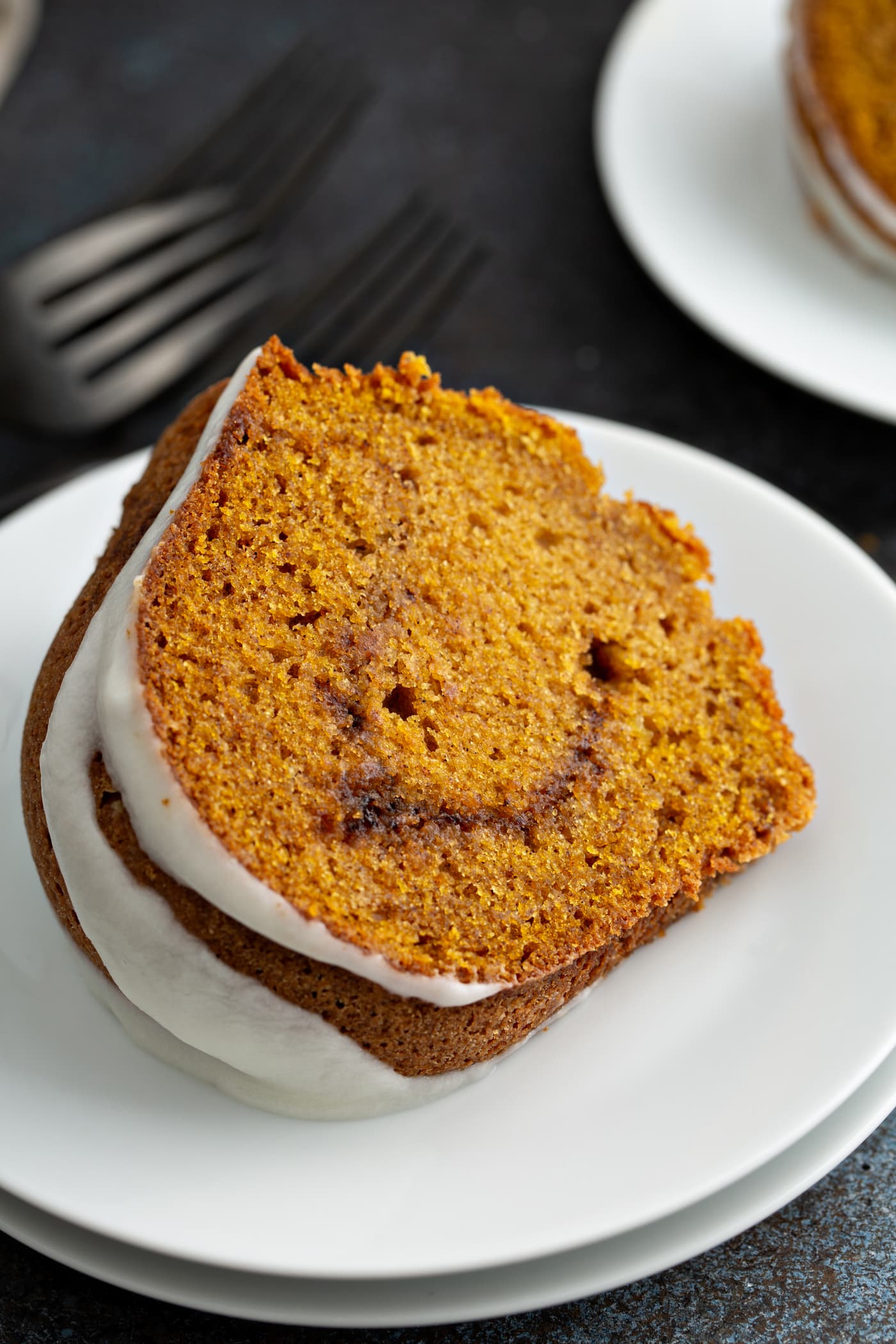 Why Is There A Hole In Bundt Cake?

Baking and cooling times vary according to batter density. Usually a bundt is 35-60 minutes depending on size and density.

Can You Freeze a Bundt Cake?

Let the cake cool completely, then set on a cardboard circle or a freezer safe plate and freeze.

Once frozen, wrap well in plastic or foil. 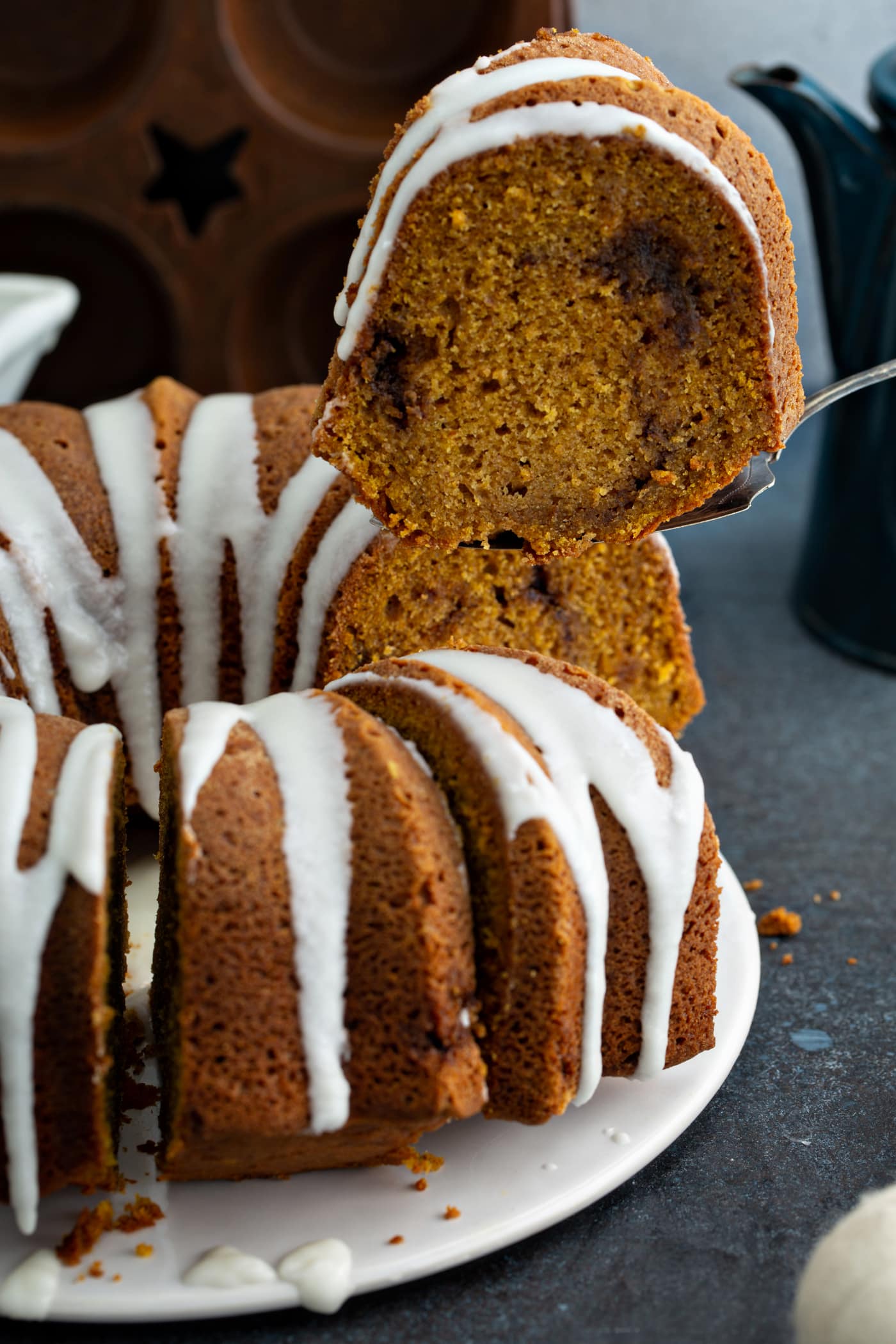 Does A Pumpkin Cake Have To Be Refrigerated?

It is not necessary to refrigerate a pumpkin cake. You just need to store it away from your fork so you don’t need to eat the whole thing.

Can You Make Your Own Pumpkin Puree?

Yes, cook the pumpkin first by steaming or baking. Scrape the cooked pumpkin from the shell of the pumpkin.

Puree the cooked flesh until smooth. BUT!!! Make sure you buy a baking pumpkin as a carving pumpkin is only for that, Jack-o-lantern carving. 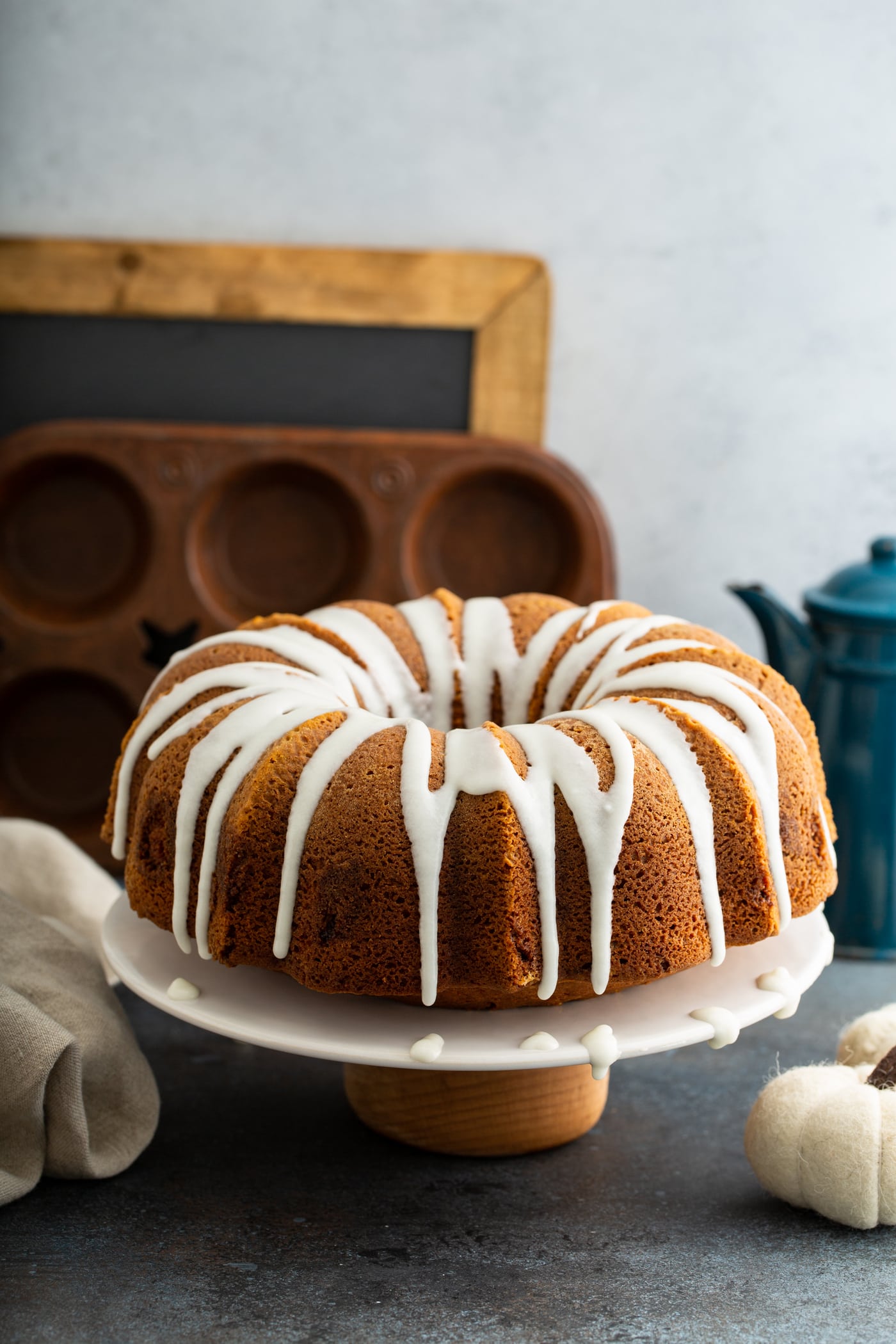 There’s nothing more fall than a pumpkin bundt cake! You’re going to love this one! 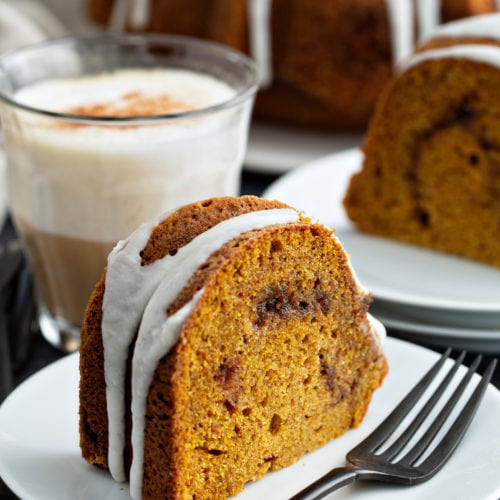