Who knew that crescent rolls, cinnamon sugar apples, brown sugar, butter and sprite could make the best easy apple dumplings with Sprite ever! 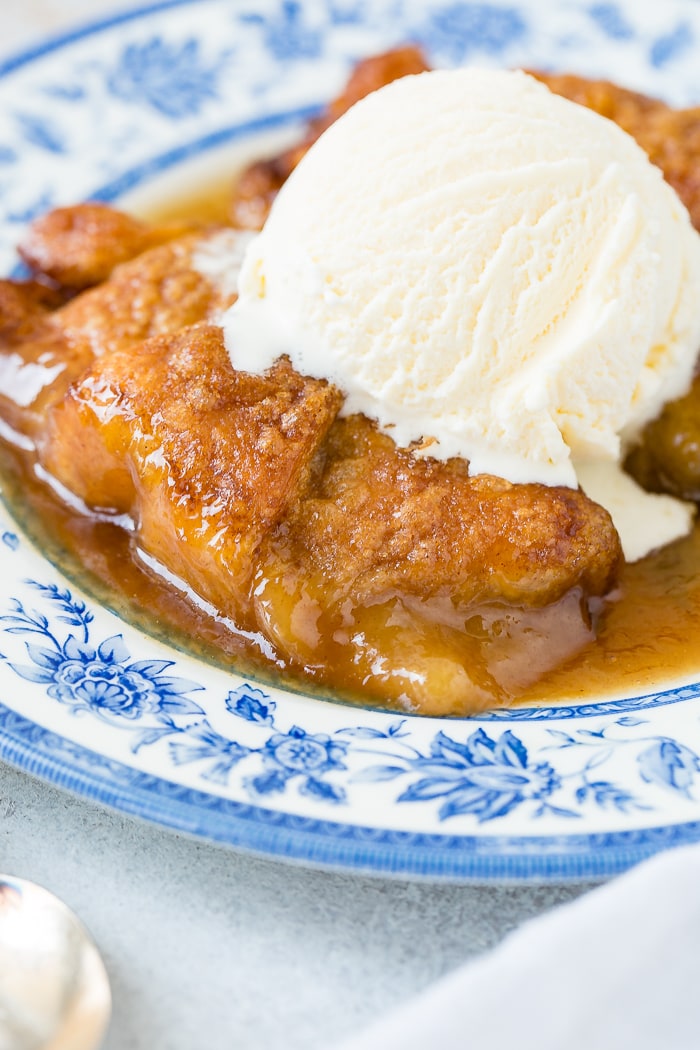 This recipe reminds me so much of my grandma’s apple rolls recipe just because that sugar liquid is so deceiving. You pour it all around the rolls and it almost puts you into  a panic attack seeing all of that liquid around the dough, like is this really going to work?! Are they going to be a soggy mess?!

And then those golden, crisp, pillows of dough come out and you’re a real life hero to the whole family.

This is seriously the craziest apple dessert recipe. Most apple desserts seem to be inspired largely from the way apple pie is made. Think about it: apple crisp, apple pull-apart bread, and apple pie scones are all takes on the classic apple pie. 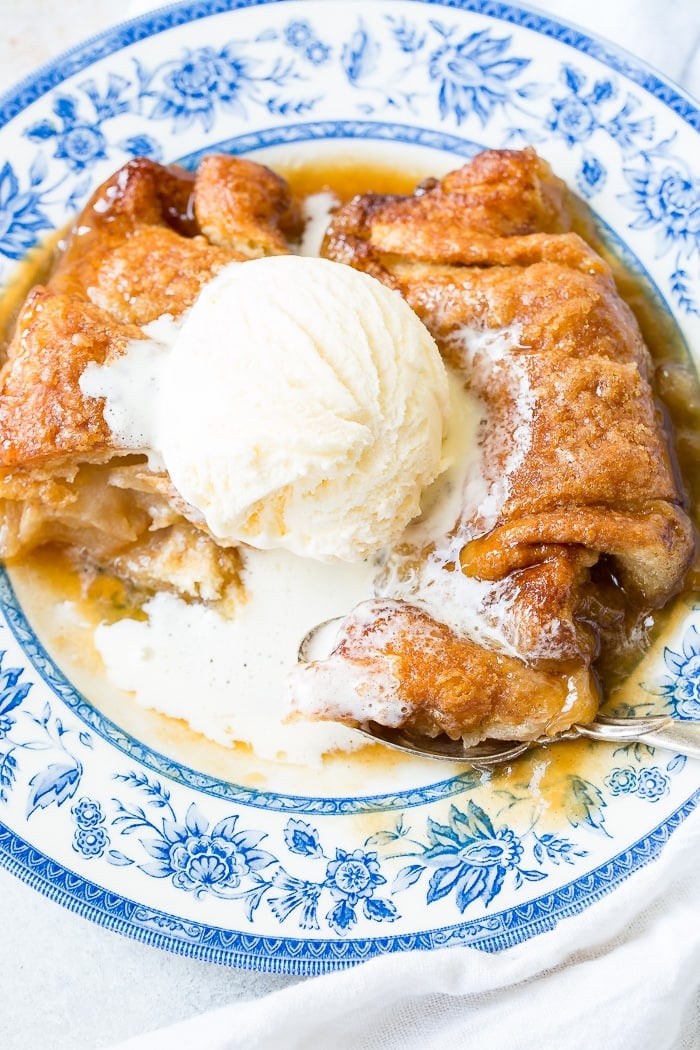 This apple dumpling recipe is similar, but as I’ve been making recipes from others over the years I felt like there was always something missing. Sure, it is a good recipe and one that your guests will love you for, but couldn’t it be taken up a notch without changing the whole recipe?

And then it hit me, when you’re trying to do something awesome and it’s not coming together, go back to the original recipe.

So I did. And do you know what I discovered? The apples were not like an apple pie, they were completely plain. No, no, no! Apples need a little cinnamon sugar action to really drive home that fall smell and flavor!

Well don’t stop there, I thought. We need a little cinnamon action in the butter mixture as well. Too many recipes called for just butter and brown sugar. No. We need more. We added vanilla and cinnamon. Let’s get this party started! 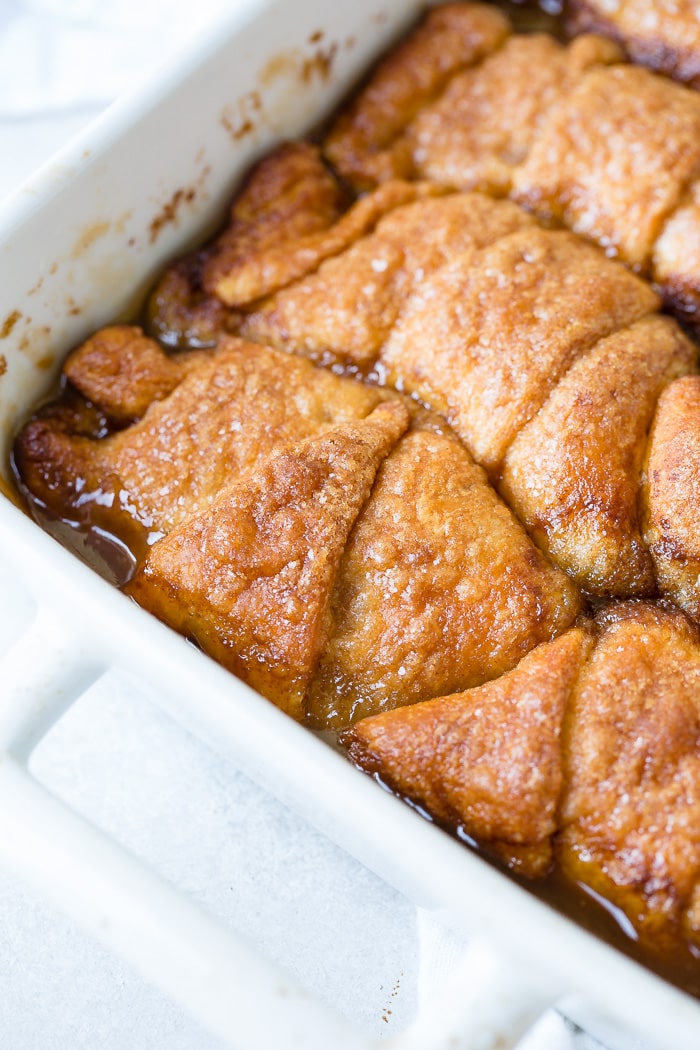 But then I changed that too.

Everyone said to use 1 1/2 cups of Sprite with the apple dumplings, but I just found that to be too much. We lowered it to 1 cup so the Sprite for sure wouldn’t go over the top but you’d still end up with a caramel sauce underneath. 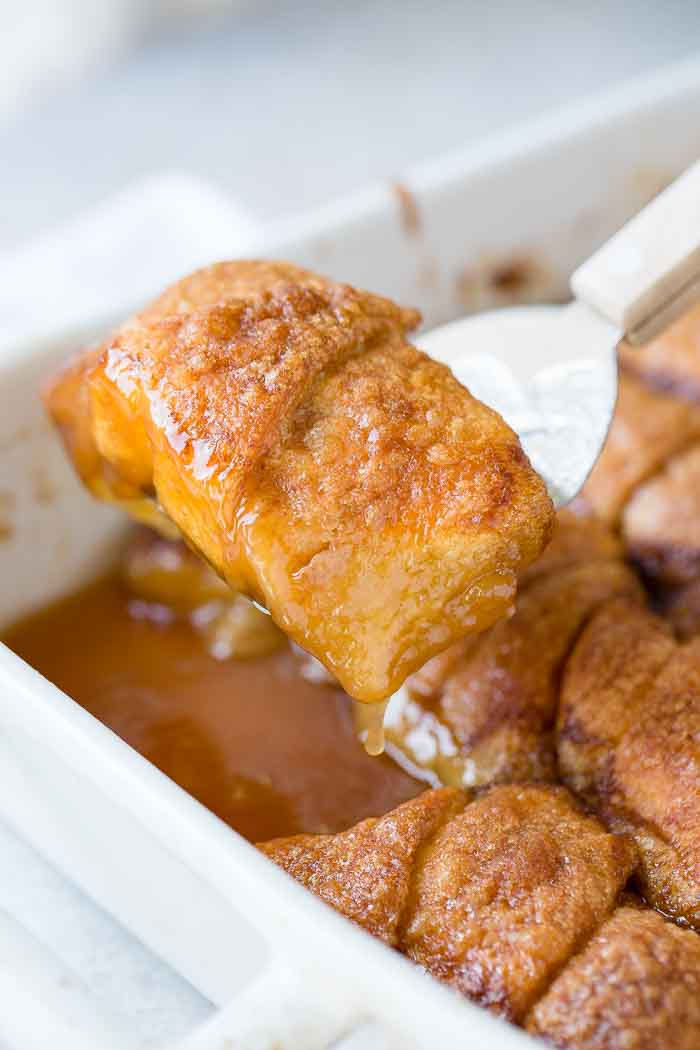 What Are the Best Apples for Apple Dumplings?

You can use pretty much any cooking apple you’d like in this apple dumpling recipe. Personally, we prefer using either Granny Smith or Honeycrisp apples, but it’s really just a matter of preference. Granny Smith are more tart than Honeycrisp, and both release a minimal amount of juice and pack in lots of fresh apple flavor.

Is There a Sprite Substitute I Can Use? 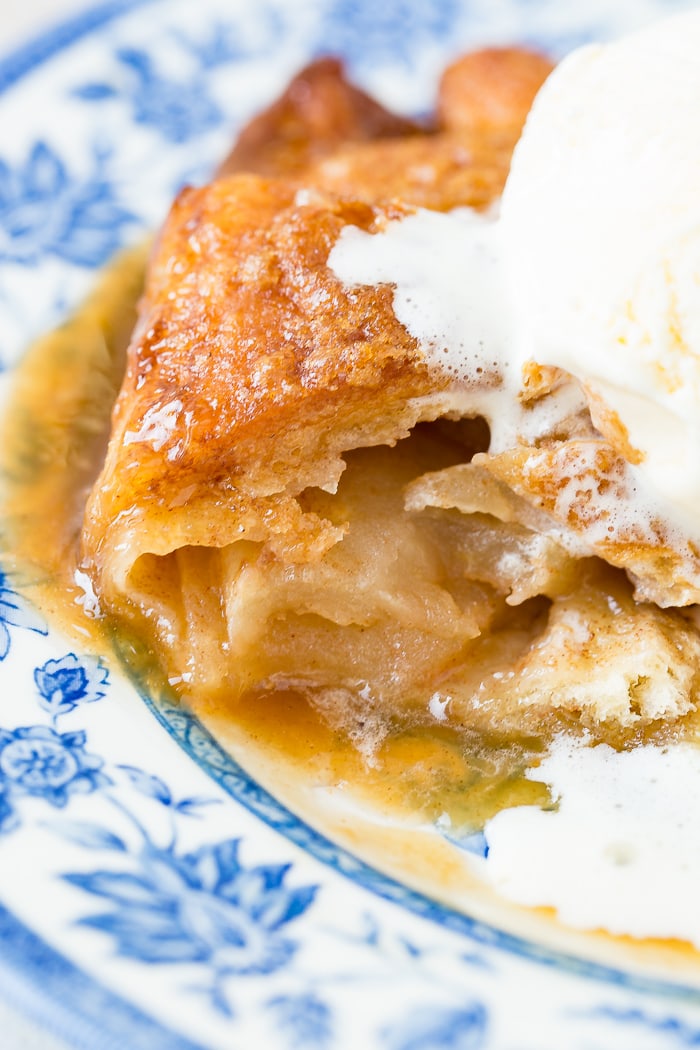 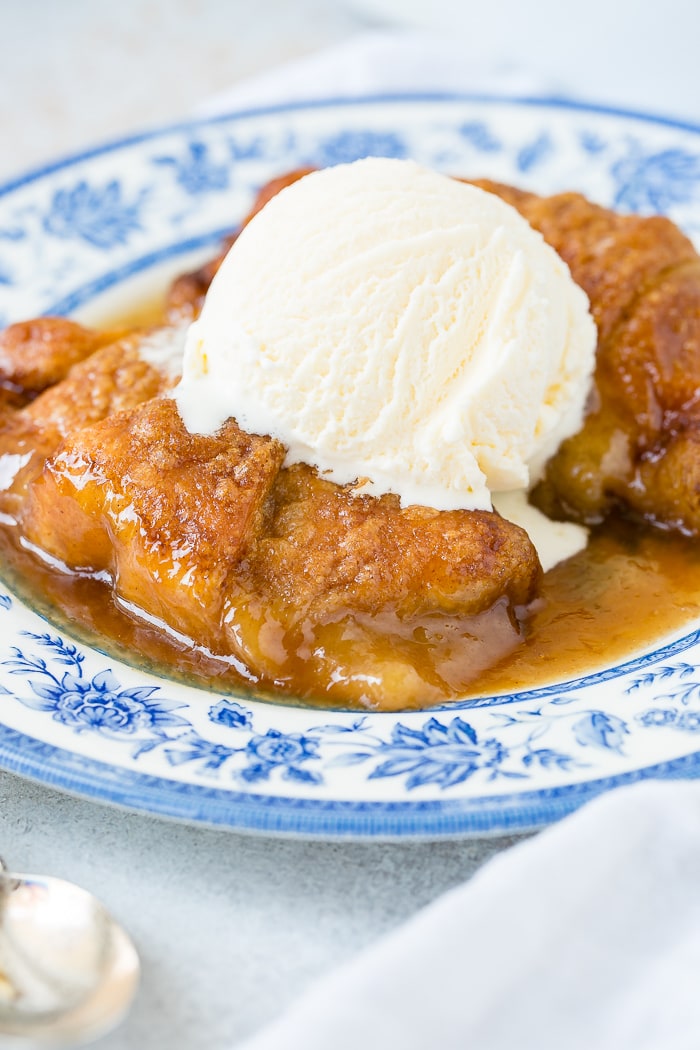 How to Reheat Apple Dumplings

To reheat apple dumplings, stick them in a pan with tinfoil over the top and place in a preheated 350ºF oven for 10 minutes. Or you can use the microwave for about 15 seconds.

How Long Are Apple Dumplings Good For?

Apple dumplings can be kept for up to two days at room temperature. You’ll want to cover them lightly and refrigerate for up to an additional 2-3 days.

Can You Make Apple Dumplings Ahead of Time?

You can make apple dumplings up to a day ahead of time. Once the dumplings have been prepped, place them on wax paper and refrigerate until ready to bake. Make sure to remove them from the wax paper prior to baking them, as wax paper isn’t oven-safe.

Can You Freeze Apple Dumplings? 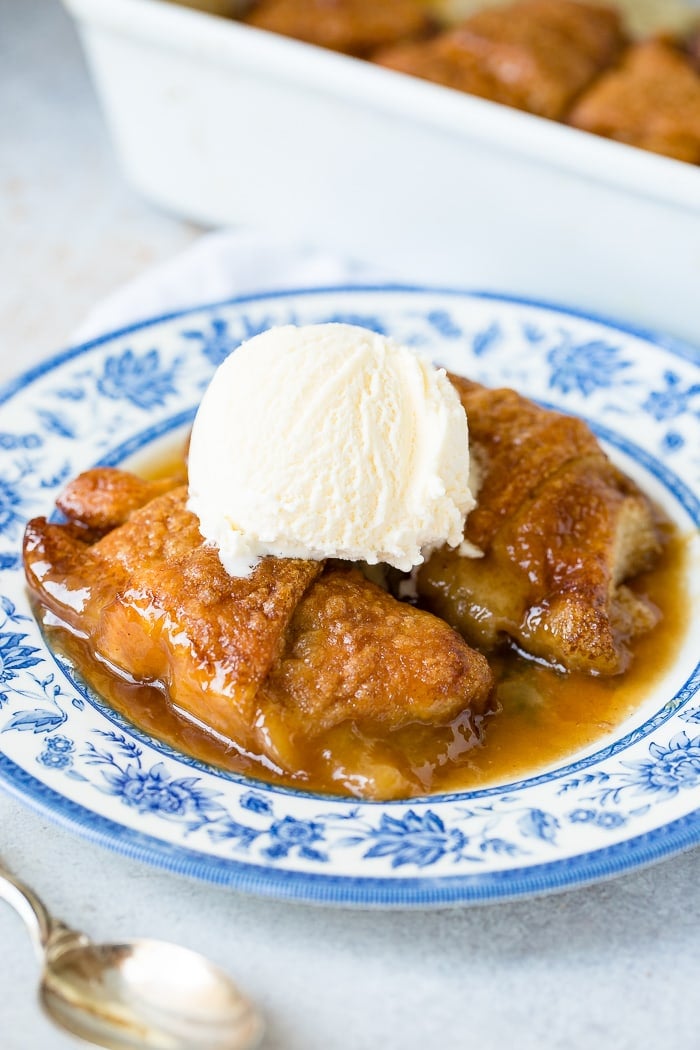 When prepping the apples, it’s important that you slice them quite thinly. If the apple slices are too thick, they won’t bake fully in the oven and your dumplings won’t have that classic apple pie-esque filling.

You’re welcome to play around with the amount of spices in this easy apple dumpling recipe. If you prefer your dumplings more cinnamon-y, add more cinnamon. You might even be able to add other warming spices like pumpkin pie spice, ground ginger, or nutmeg. If you try out a different spice combination, leave us a comment letting us know how you like it!

Finally, we highly suggest eating these apple dumplings with a big scoop of vanilla ice cream. The warm dumplings paired with the creamy, cold ice cream is an unbeatable combo! If you have extra time on your hands, you could even whip up a batch of homemade caramel sauce to drizzle over these dumplings. 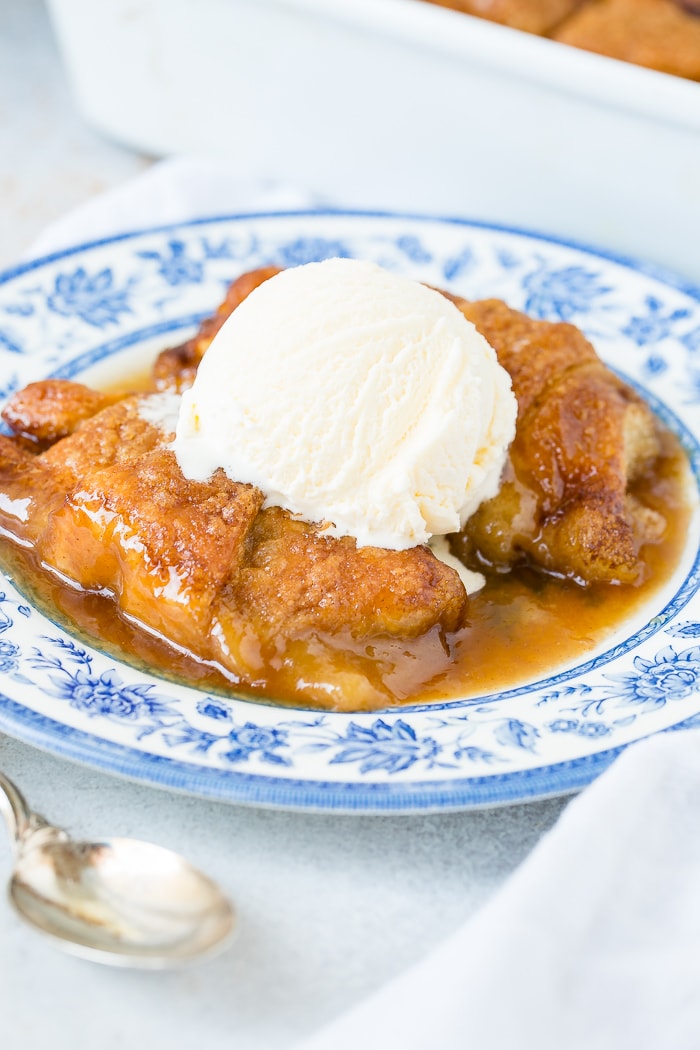 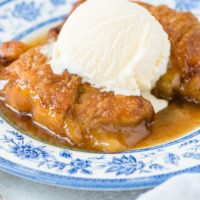