As a kid, bread pudding didn’t appeal to me. Soggy bread? No thanks! As I got older, I quickly changed my tune. I promise this Apple Bread Pudding with Vanilla Sauce will change yours too! 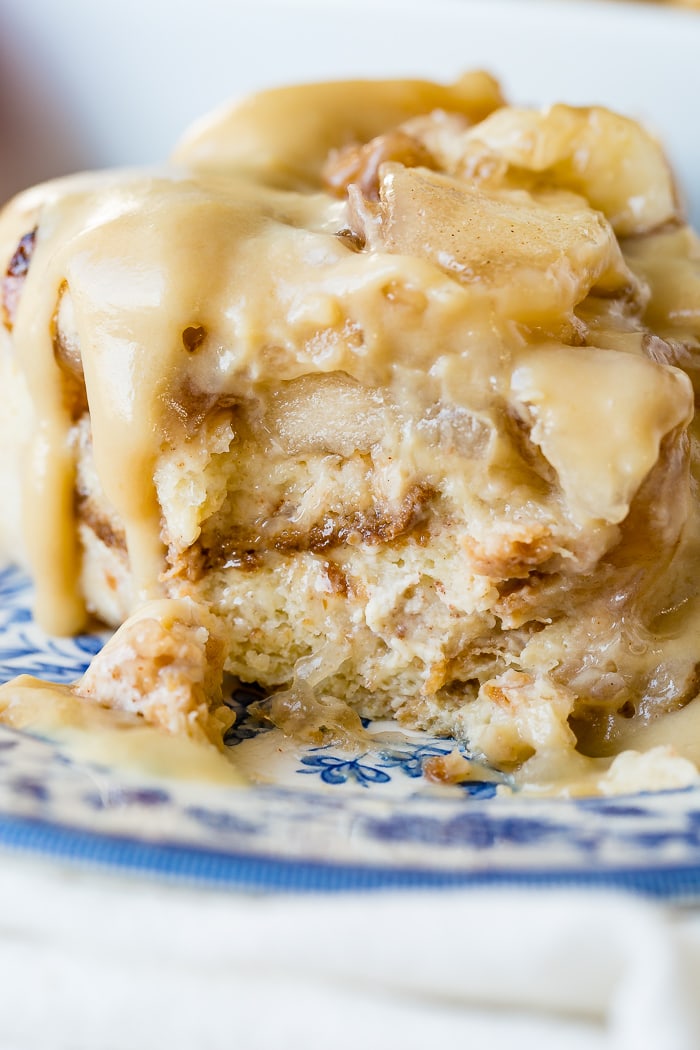 This is it, a simple but traditional dessert that you can make all fall and winter, especially for the holidays. Can’t you just picture a warm cozy fire, all of the family snuggled up in the living room with big bowls of warm Apple Bread Pudding with Vanilla Sauce? Everyone is joking about memories and stories from growing up, and you stop for just a moment to watch and listen, taking in every moment.

I love when you let yourself be totally present in the moment. Sometimes I think, please let me remember their little hands and giggles and paint this picture in my mind forever. When I serve my kids this homemade bread pudding and see their faces light up as they eat it, it makes my heart melt. Please let these moments last forever!

Traditional bread pudding usually uses raisins, but we chose to mix things up in this easy bread pudding recipe. Instead of raisins, we used sweet glazed apples and crunchy walnuts. If the apples didn’t have a glaze on them, I would have folded them in with the bread and custard. However, I chose not to for two reasons.

Besides the addition of these glazed apples, this is a fairly traditional bread pudding recipe that I think you and your family will love! 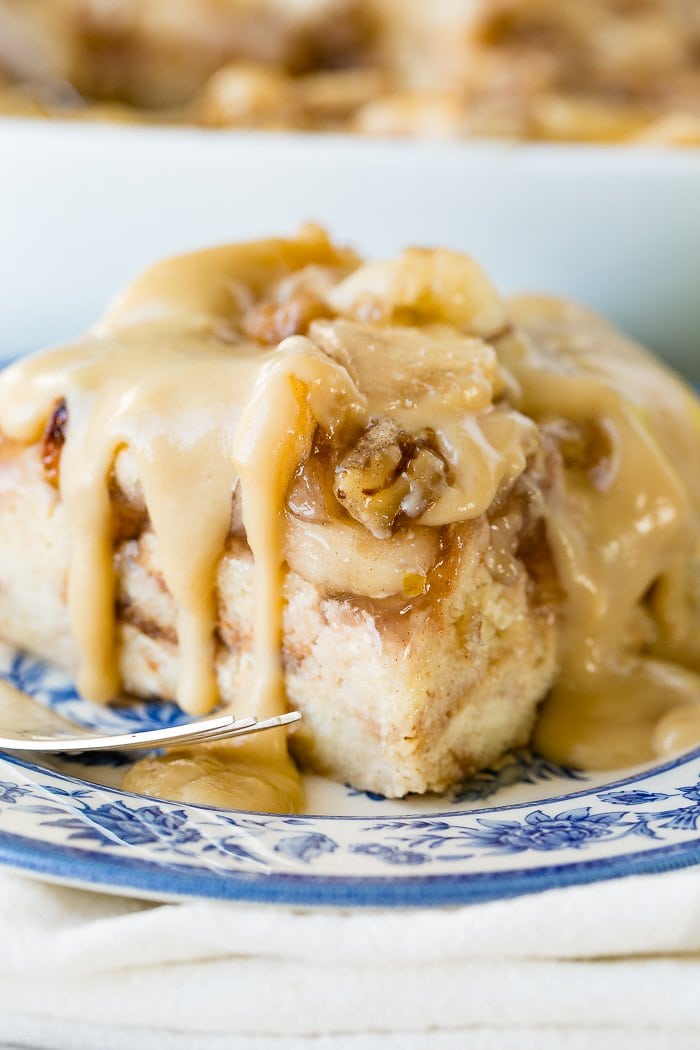 What is Bread Pudding?

Bread pudding isn’t actually pudding. It really is the dumbest name. I mean, yes there’s a custard that turns the bread soggy, but that’s really it. Bread pudding is actually comprised of thick pieces of bread that have been piled into a casserole dish and covered with a custard made from milk, sugar, eggs, spices and usually a fruit (often raisins).

The entire dish is cooked until the bread has absorbed all of the liquid and resembles a baked french toast. Bread pudding is almost always served with a warm sauce over the top and is meant to be served without any other toppings.

Some people eat bread pudding for breakfast, but in our house it’s a dessert. 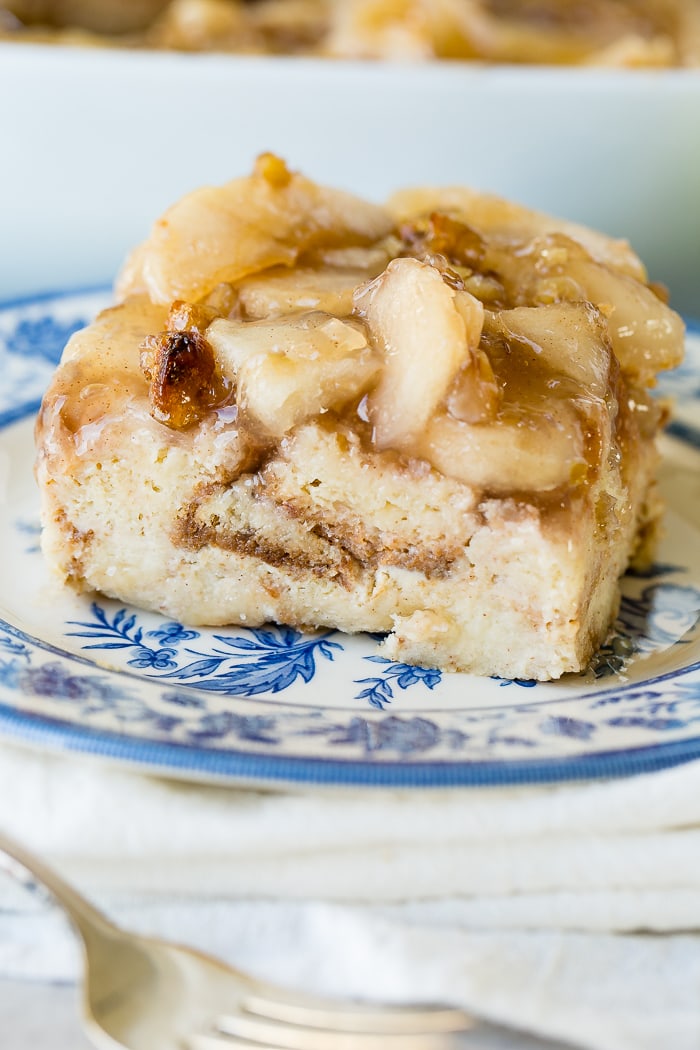 And for the vanilla sauce for the bread pudding, you’ll need:

You can actually use a few different types of bread to make apple bread pudding, including:

These are the only types of bread that I will use in my homemade bread pudding recipe because of their dense texture and flavor. When choosing a bread for bread pudding, you want one that is thick and dense enough that it won’t fall apart in all of that custard, and also something with a great flavor to really enhance anything else you add to the bread pudding. 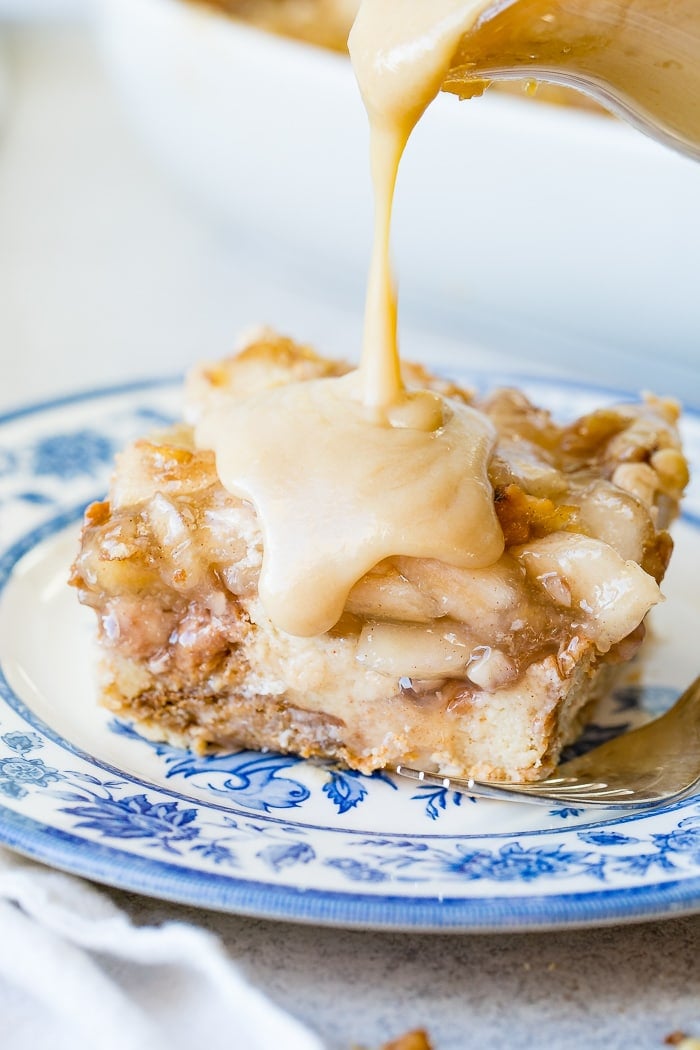 How to Make Bread Pudding

Homemade bread pudding requires a little extra TLC to make, but overall it’s incredibly easy to prepare. As long as you give yourself enough time to chill the bread pudding before baking it, you’ll be fine! Here’s how to make bread pudding from scratch: 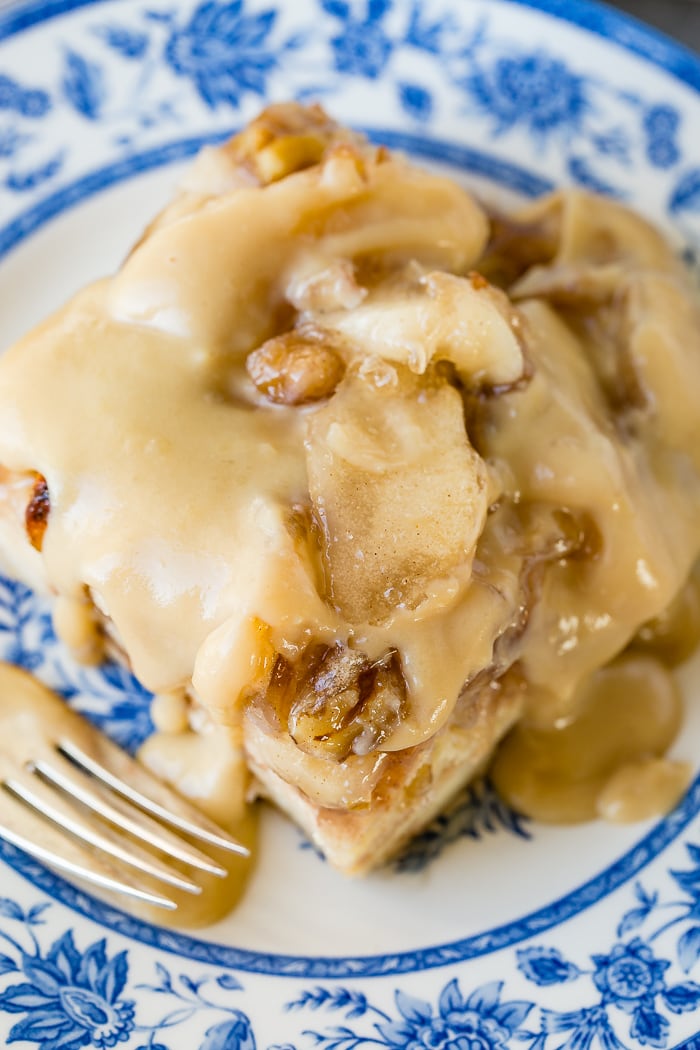 How to Serve Bread Pudding

Bread pudding is served by scooping a portion out into a bowl, served warm with a warm sauce over the top. You can totally add ice cream or whipped cream if you’d like as well, but I kind of prefer mine just with the sauce.

Although, there is something wonderful about warm food alongside creamy, cold ice cream. Up to you!

How to Reheat Bread Pudding 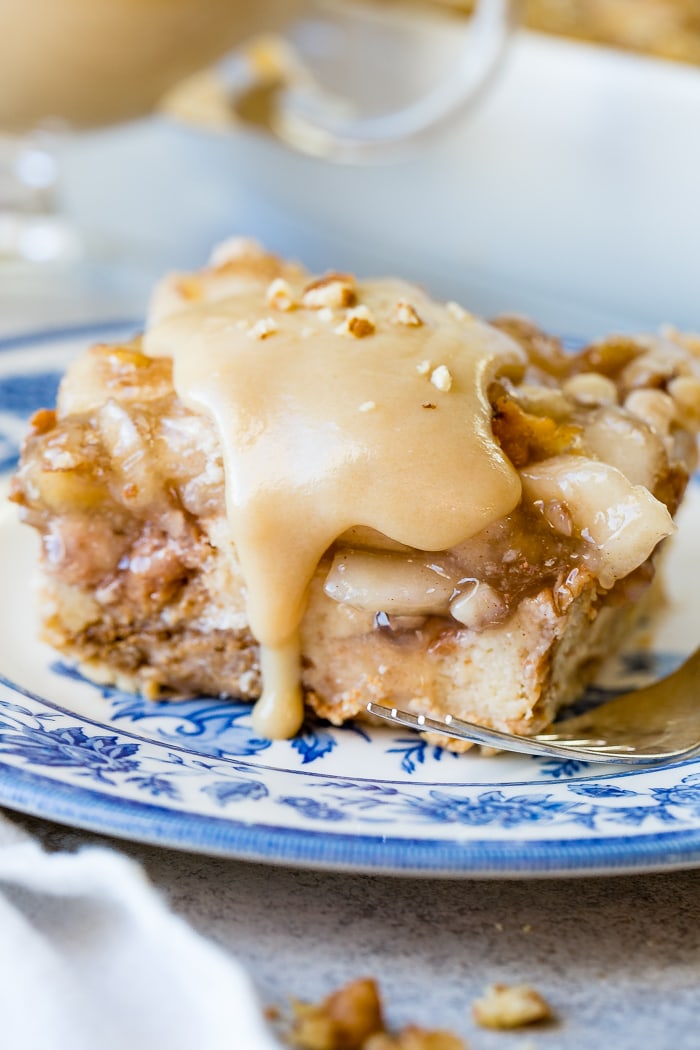 Can Bread Pudding Be Frozen?

I bet you’ll be surprised to learn that bread pudding can in fact be frozen. However, just remember that it can only be frozen once it has been baked entirely. If you attempt to freeze it before being baked, it will separate and go completely soggy. It’s not worth the attempt.

Here’s how you freeze bread pudding:

Once you’ve got the bread pudding in the freezer it should last for 2-3 months. That’s pretty darn good!

Can I Make This Bread Pudding Egg-Free?

Eggs are essential to a good, traditional bread pudding, but we understand that there are food restrictions and dietary choices that could cause one to look for an eggless bread pudding recipe. If that’s you, may we recommend just skipping the eggs and using soy milk instead? The eggs really help to create a custard that is thick, creamy and really binds the bread together, but you should be okay to switch things up a bit.

Can Bread Pudding Be Made in Advance?

Yes, you can actually make this bread pudding recipe an entire day ahead of time, and you have two options when you do so. 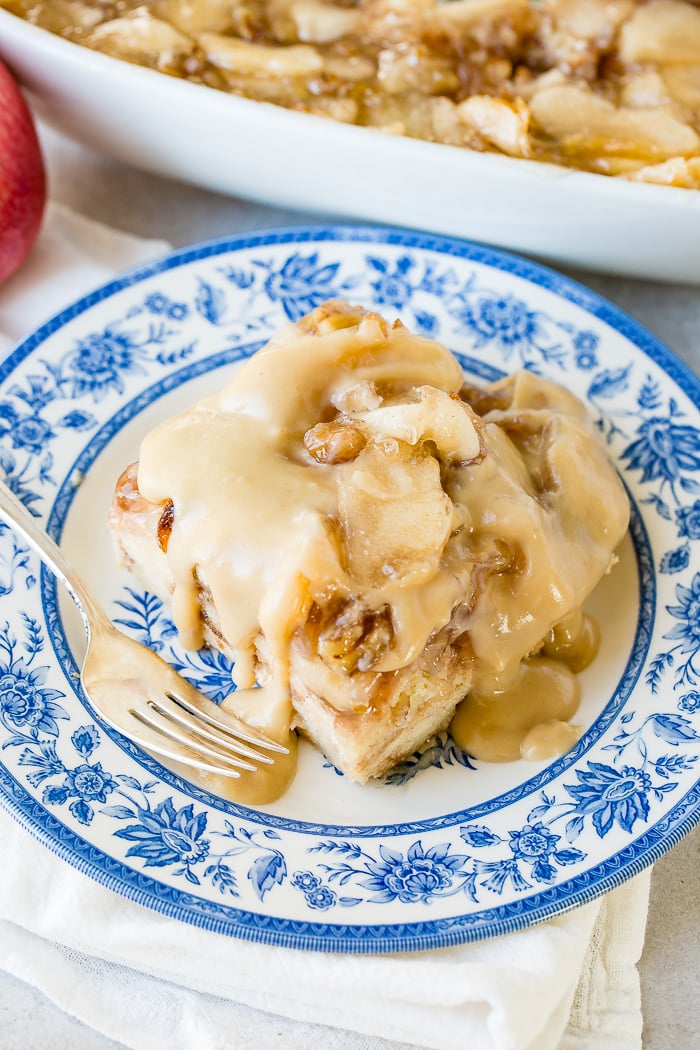 Tips for the Best Bread Pudding

Starting with really dried out bread, day old bread, or toasted bread is key to making the best bread pudding. The dry bread soaks up the vanilla sauce without turning to mush, which gives the bread pudding a better texture overall. Fresh bread won’t work for this recipe, so please don’t use it!

We also recommend using 2% or whole milk in this apple bread pudding recipe. Even though this recipe calls for heavy cream as well, you want to pair it with a milk that has a good amount of fat in it. The milk fat adds moisture and flavor to the bread pudding and prevents it from drying out.

Lastly, you’re welcome to add more or less spices to this easy bread pudding to suit your own tastes. We like our bread pudding to be nice and cinnamon-y, but I know not everyone loves that! 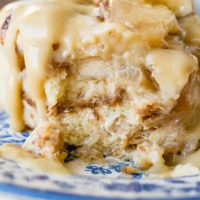 3.68 from 31 votes
Prep Time: 1 hour
Cook Time: 50 minutes
Additional Time: 10 minutes
Total Time: 2 hours
Servings: 12
Save Recipe Print Recipe
As a kid, bread pudding didn't appeal to me. Soggy bread? No thanks! As I got older, I quickly changed my tune. I promise this Apple Bread Pudding with Vanilla Sauce will change yours too!