These Apple Cider Cupcakes are light, fluffy and topped with a cinnamon cream cheese frosting. One of my favorite fall cupcake ideas! 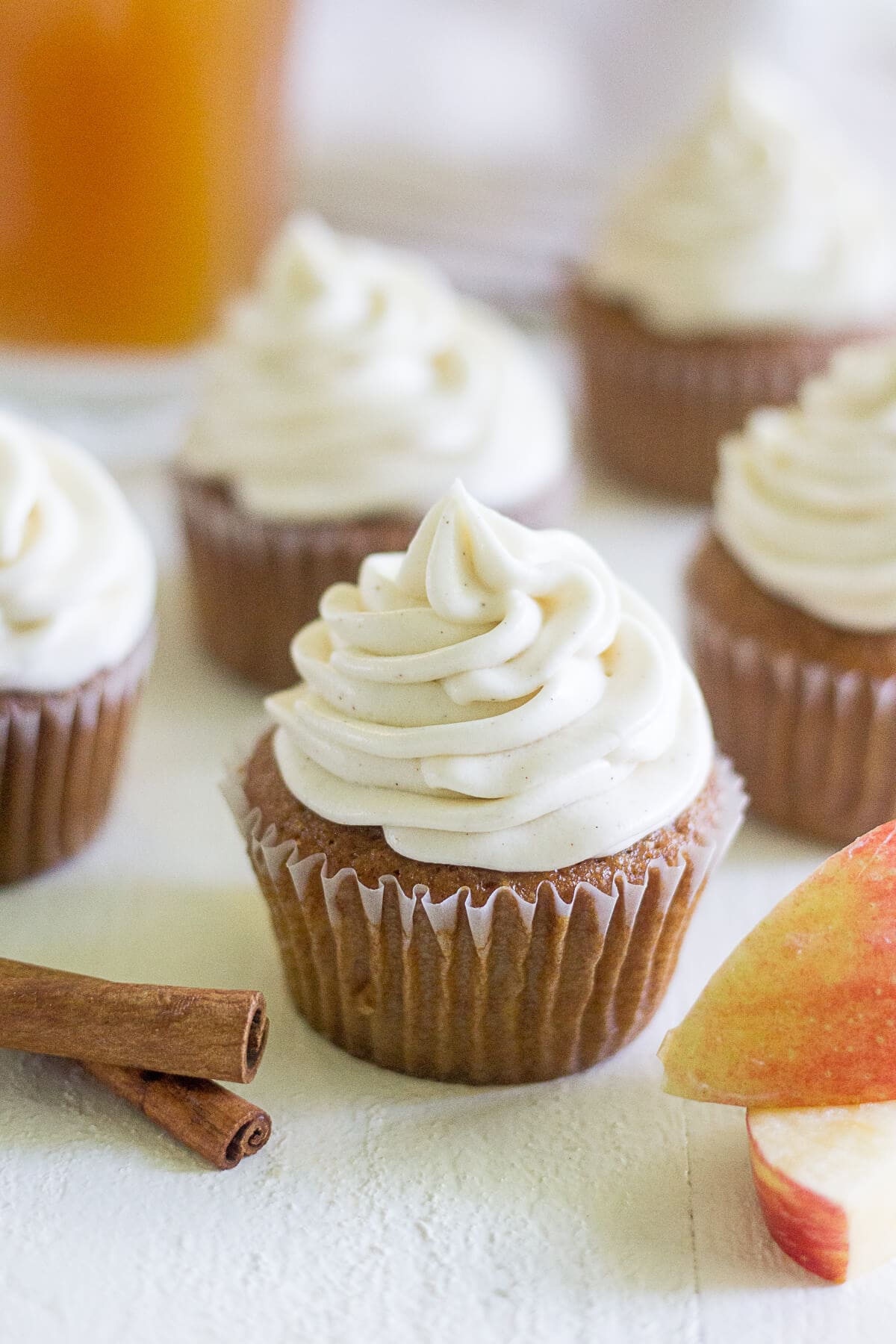 Who’s ready for all things fall?!🙋🏽

With the end of August comes cooler mornings, warm coffee instead of iced, cinnamon flavored everything, and all things pumpkin and apple. I’m one of those people that loves all things fall. I’ve been looking forward to pumpkin everything since the beginning of this month!

One of the main reasons I love fall so much is for apple picking! There’s a fruit farm down the street where I get all farm fresh picked apples and fruit all fall long. They make a killer apple cider and apple cider slushy that I sip on while a pick my Honeycrisps.

When you take a bite into these apple cider cupcakes you will be instantly transported to the middle of fall! I shared them with my friends and family who came to my house to celebrate my birthday this week. They all fell in love them just as much as I did! 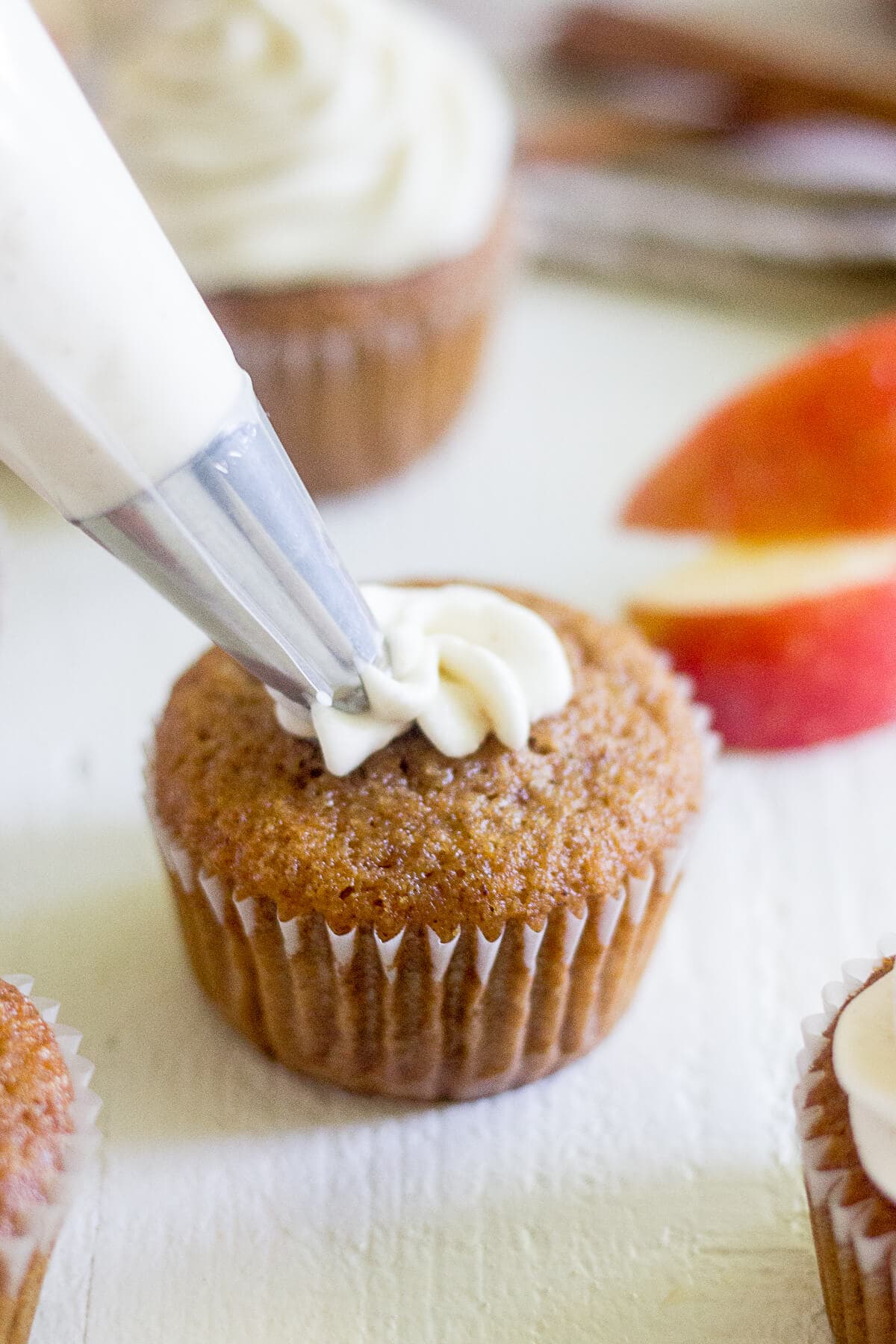 To make these easy fall cupcakes, you start with all of the usual cupcake ingredients: 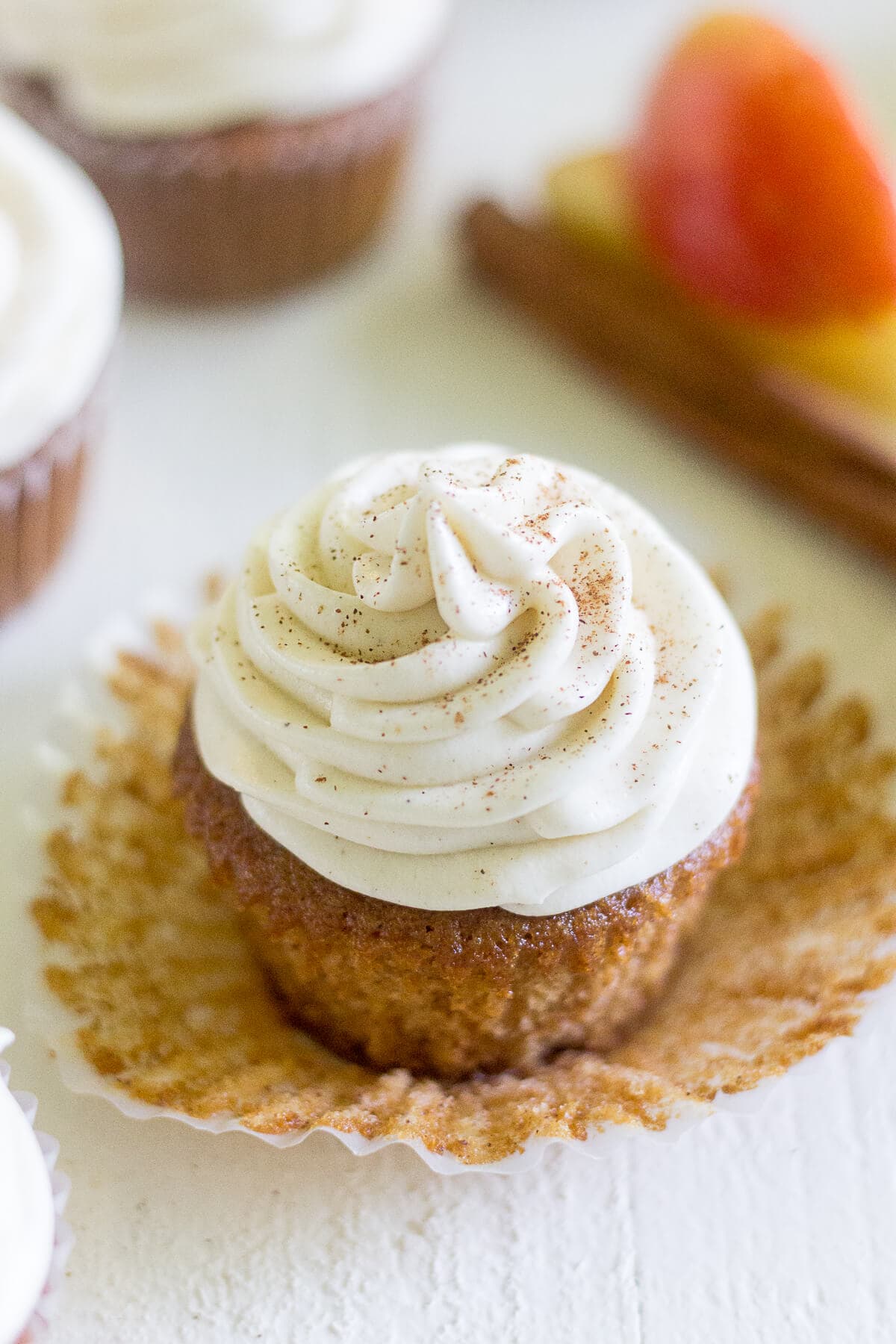 How to Make Apple Cider Cupcakes from Scratch

The tang from the apple cider is the perfect complement to the sweetness in this recipe. Together they balance really well and create an apple cupcake that isn’t too sweet, but just sweet enough!

How Do You Know if Cupcakes Are Done?

When you pull the apple cupcakes out of the oven, you should be able to insert a toothpick into the center and it come out clean. Once they’re done, let them cool completely so you can add some yummy frosting. 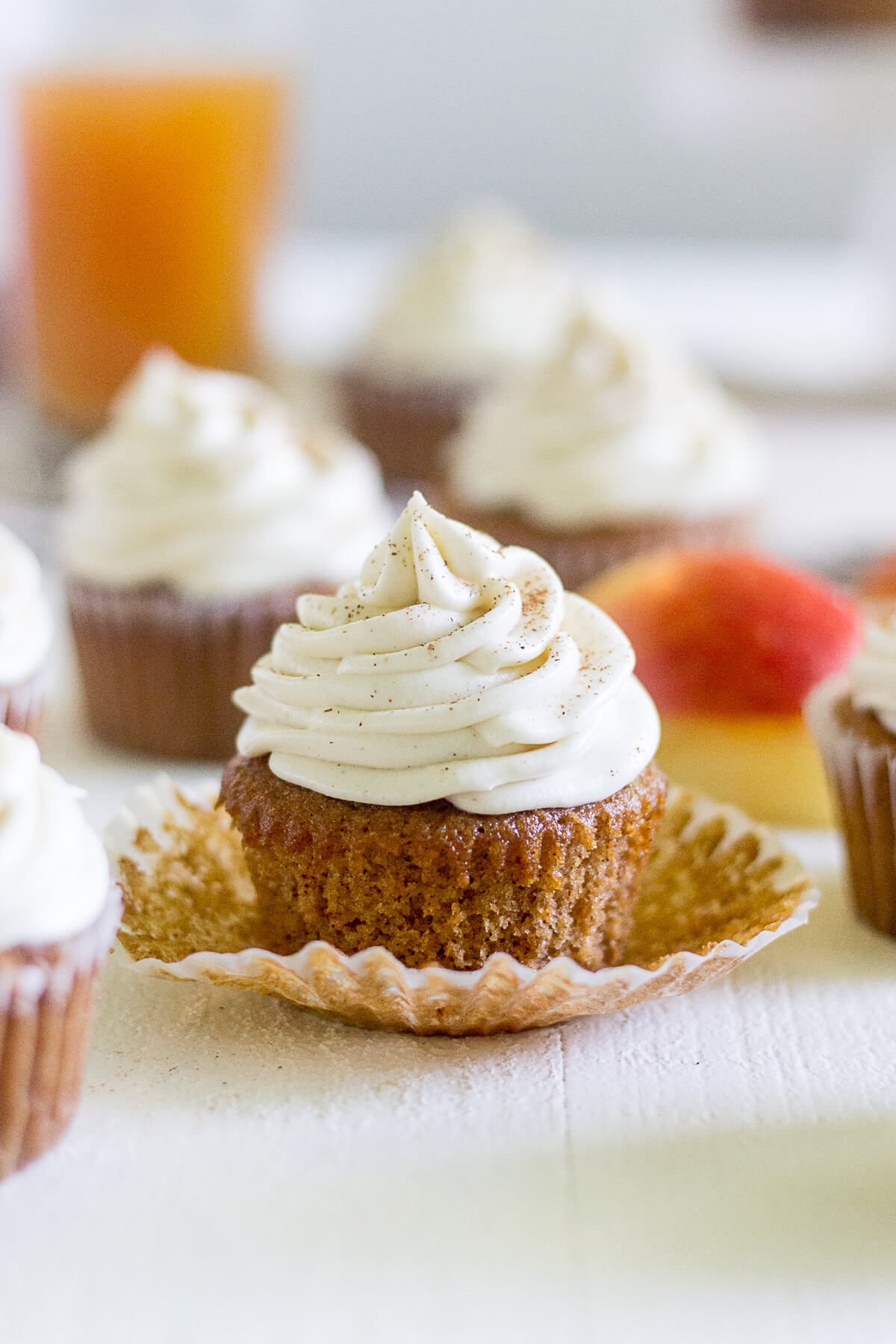 My trick to making the perfect cream cheese frosting is the right temperature of your cream cheese and butter and whipping the two together for just enough time.

I like to bring my butter and cream cheese to room temperature, which means leaving it sitting out on the counter for 2-3 hours. When you press your finger into the butter it should leave a small dent, but not be too melty.

Beat the cream cheese and butter together for at least 2 minutes until creamy. Once you add the sugar, you’ll want to beat it for another full 3 minutes at least. This is what takes all the clumps out of the frosting and you end up with a light and fluffy frosting to pipe onto these apple cupcakes. 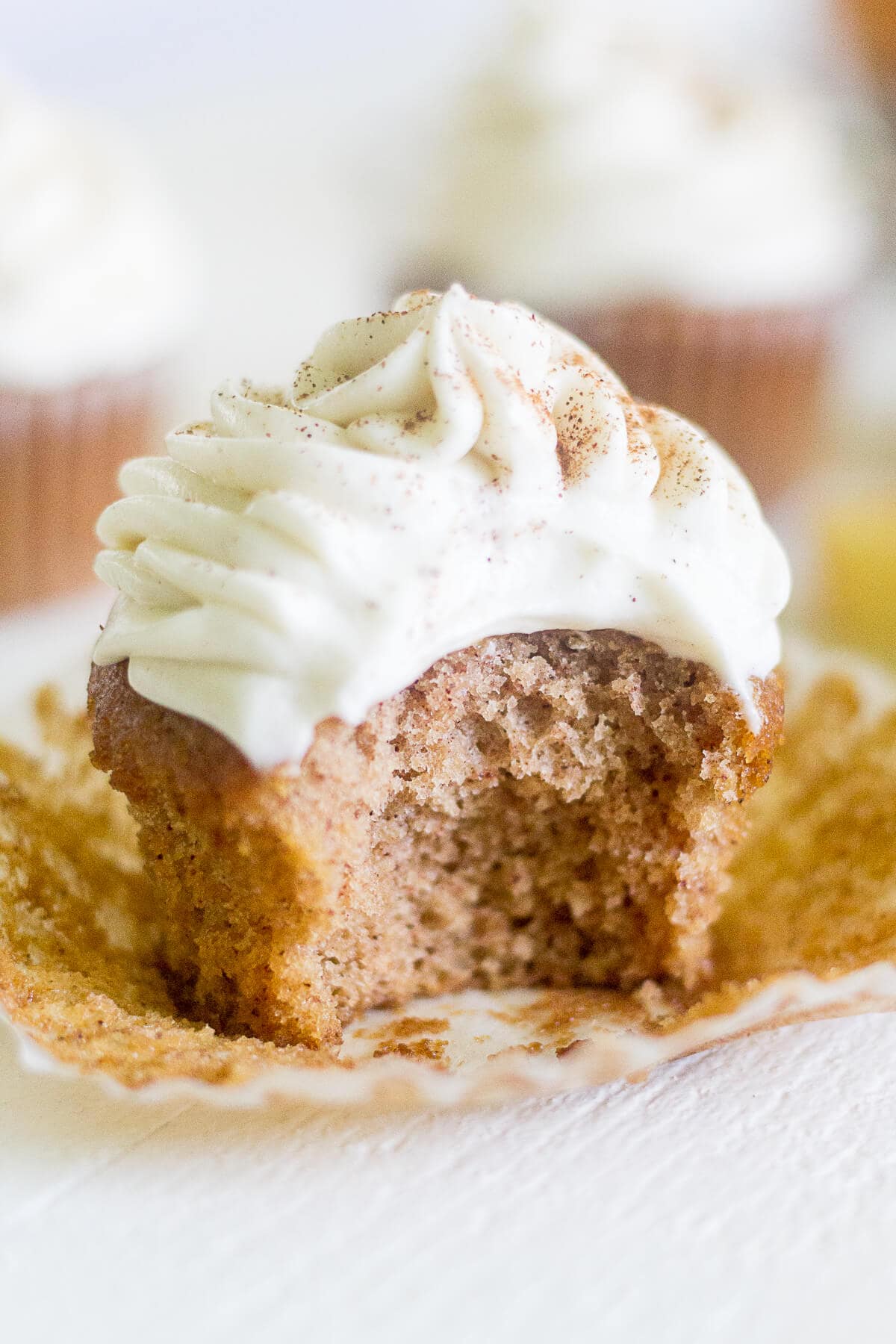 What’s the Difference Between Apple Cider and Apple Juice?

Apple juice and apple cider are both fruit beverages made from apples, but there is a difference between the two. Fresh cider is raw apple juice that has not undergone a filtration process to remove coarse particles of pulp or sediment.

Can You Use Apple Juice in Place of Apple Cider?

To accommodate for the extra sugar in apple juice, reduce the sugar in your recipe, add something acidic, such as lemon juice or apple cider vinegar, or use unsweetened apple juice.

How to Store Apple Cider Cupcakes

Because the frosting contains cream cheese, you’ll need to store these fall cupcakes in the fridge. Store in an airtight container so they don’t dry out. They’ll last up to 5 days! 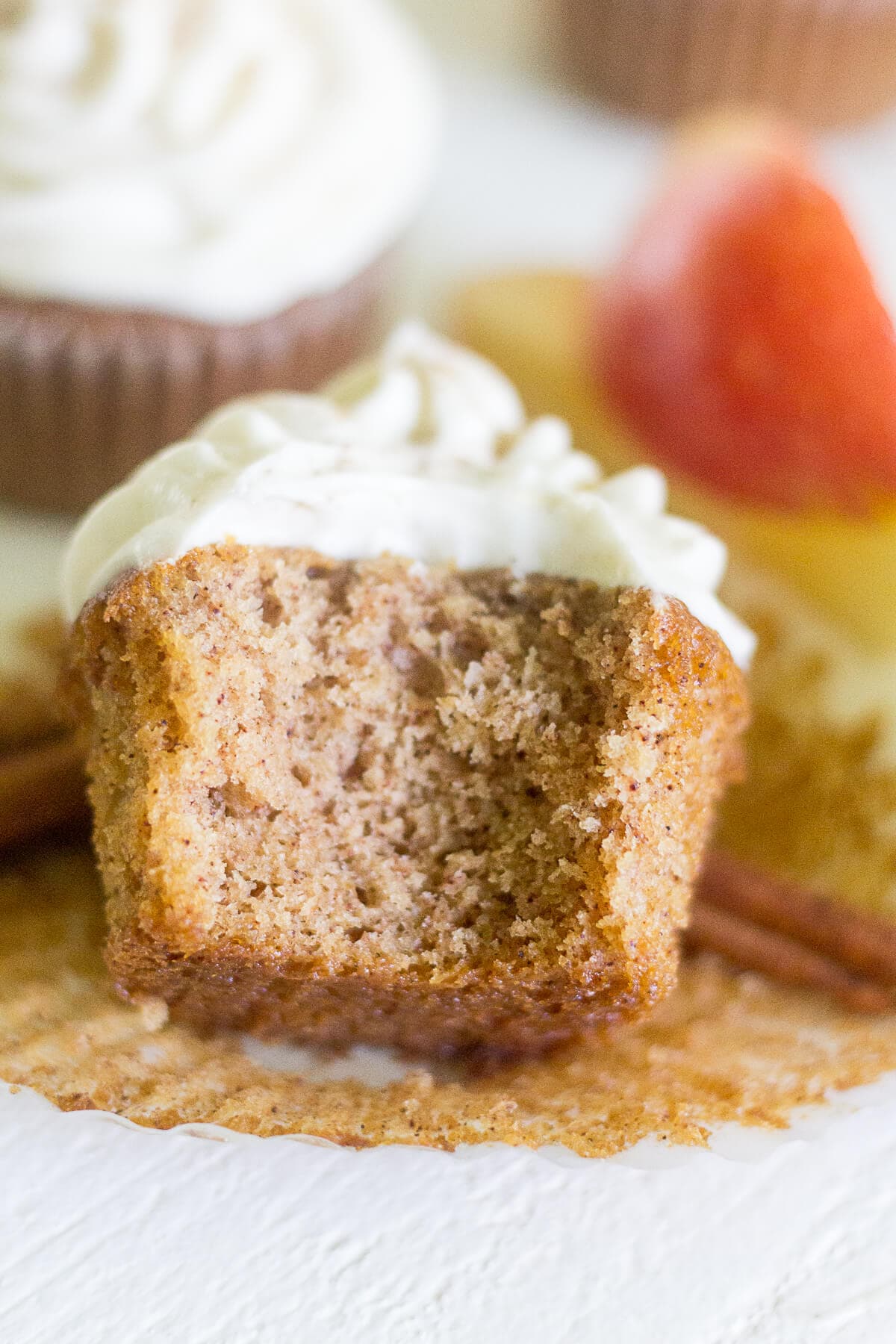 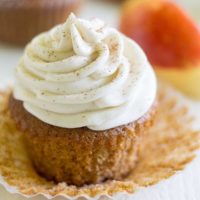