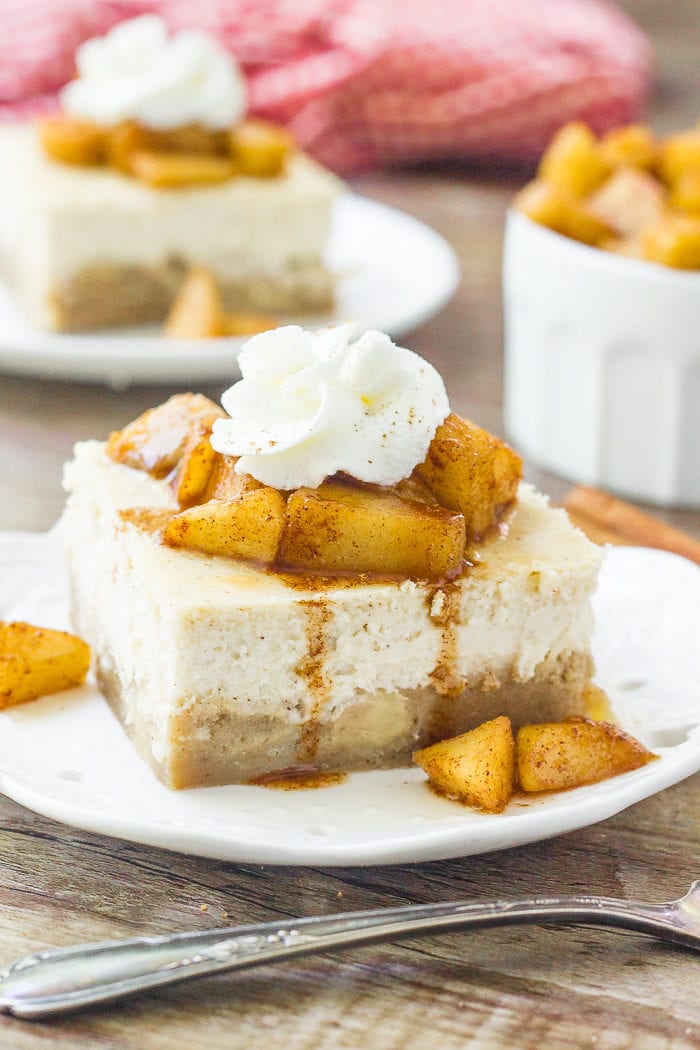 Have you ever tried the combo of apple and cheesecake? It’s seriously to die for. The sweetness of the apple goes sooooo deliciously with the creamy, tangy cheesecake. And when you add in delicious brown sugar and cinnamon then you’re in for a real treat.

And that’s exactly what these apple cheesecake bars are. They start with a chewy, apple cinnamon blondie as the base. Then it’s a simple cheesecake that’s smooth and creamy with just a hint of cinnamon. To top it off we’re adding a spoonful (or two) of apple pie filling on top of each piece.

How to Make Apple Cheesecake Bars

These apple cheesecake bars aren’t too complicated to make, but there are 3 components: the apple blondie base, the cheesecake layer, & the apple pie topping. 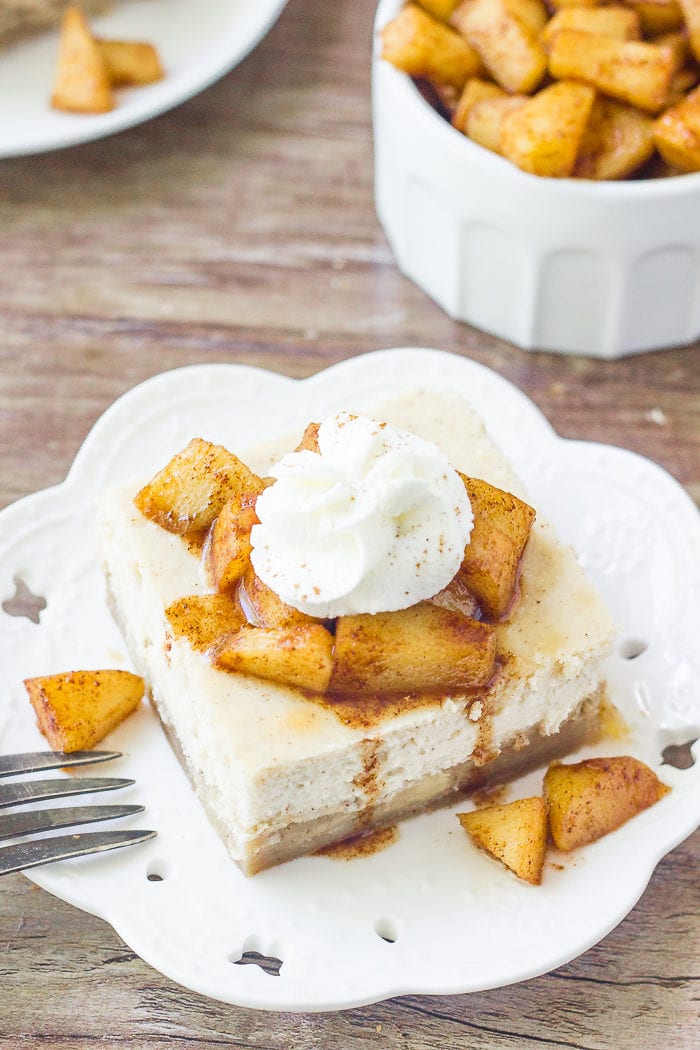 To get started we first make the apple blondie base. It’s an easy, no mixer blondie recipe. First, we whisk together melted butter, sugars, and eggs. Then gently stir in the flour, cinnamon, salt, and chopped apples. The blondie base bakes for about 25 minutes. It should look set on the top when you take it out of the oven.

How to Avoid Cheesecake Sinking or Cracking

With cheesecake, it’s super important to let it cool slowly to minimize the risk of the cheesecake sinking or cracking. I like to cool mine in the oven with the door open (oven turned off) for about 20 minutes, then continue cooling at room temperature until it’s totally cooled. This helps to cool the cheesecake really gradually. From there it goes in the fridge to chill for at least 4 hours or preferably overnight.

The flavor actually gets better after you chill the cheesecake, so it’s perfect for making ahead. 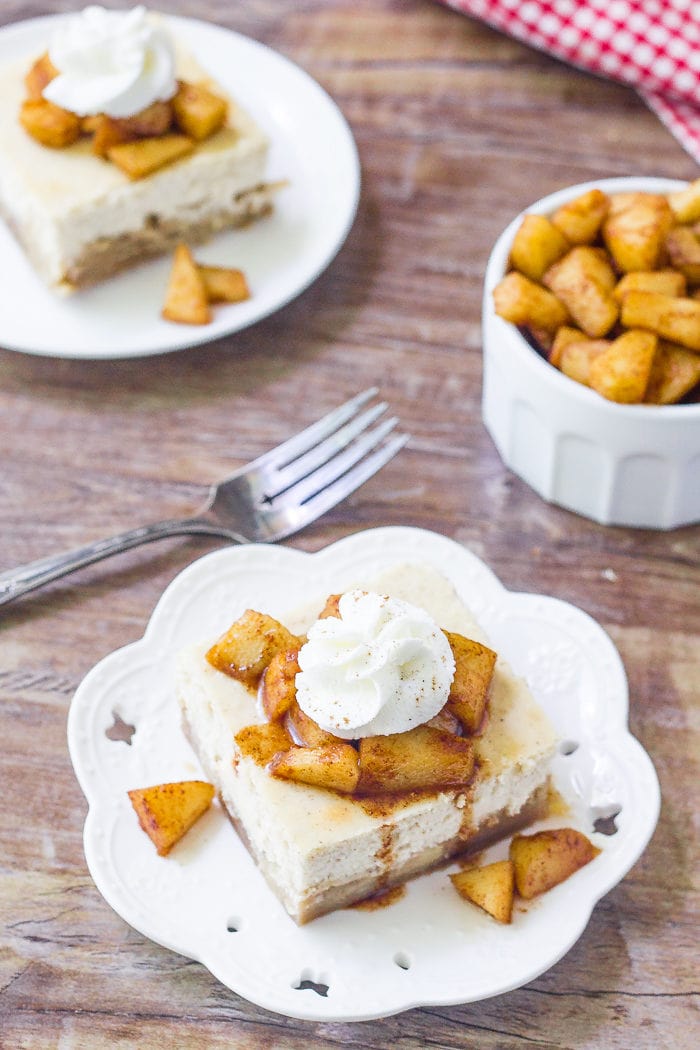 You can either make the apple topping right before serving or make it ahead of time and store it in the fridge. All you need to do is cut up some apples and add them to a saucepan along with some brown sugar, cinnamon, water & butter. The apples will soften, and then you’re all done.

Can you Use Canned Apple Filling?

If you want to save time, you can also buy pre-made apple pie filling to use instead.

Once you’re ready to serve each slice gets topped with the apple pie filling for the most delicious fall treat. These apple cheesecake bars are seriously delicious and the perfect way to use up all your favorite fresh apples. 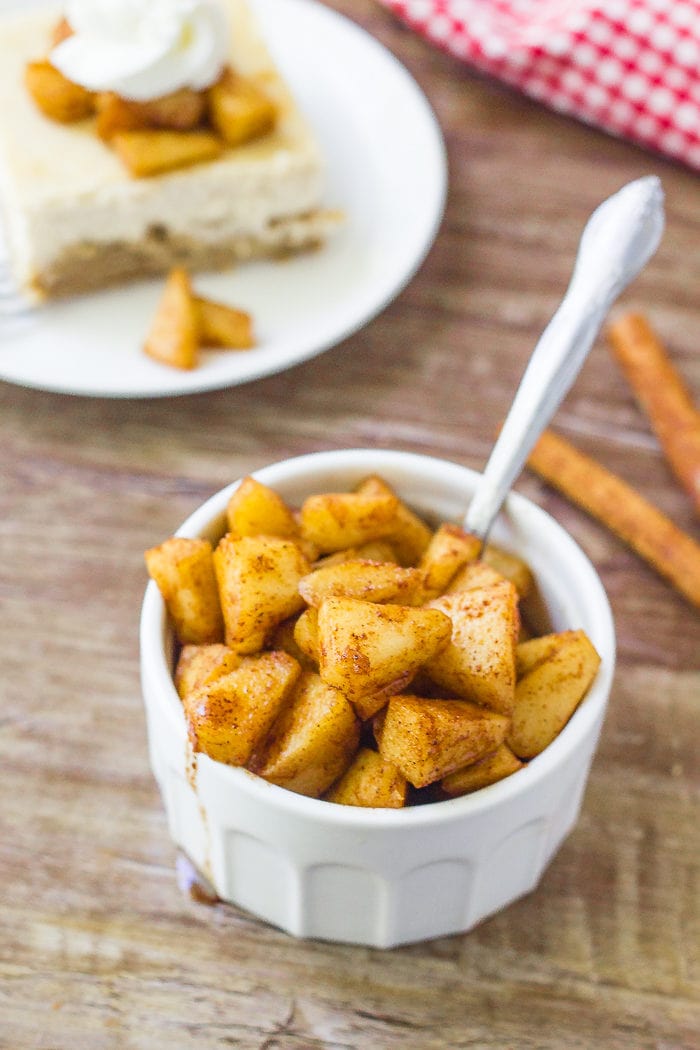 It’s not fall until you’ve made apple pie bombs a la mode with creamy vanilla ice cream and those glazed apples all over the tops. I love fall dessert recipes! 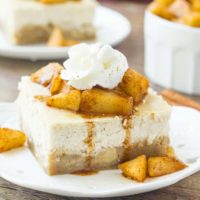