We’ve tried a lot of recipes out there but this is hands down the best apple crisp recipe we’ve found and it can totally be made ahead or frozen. 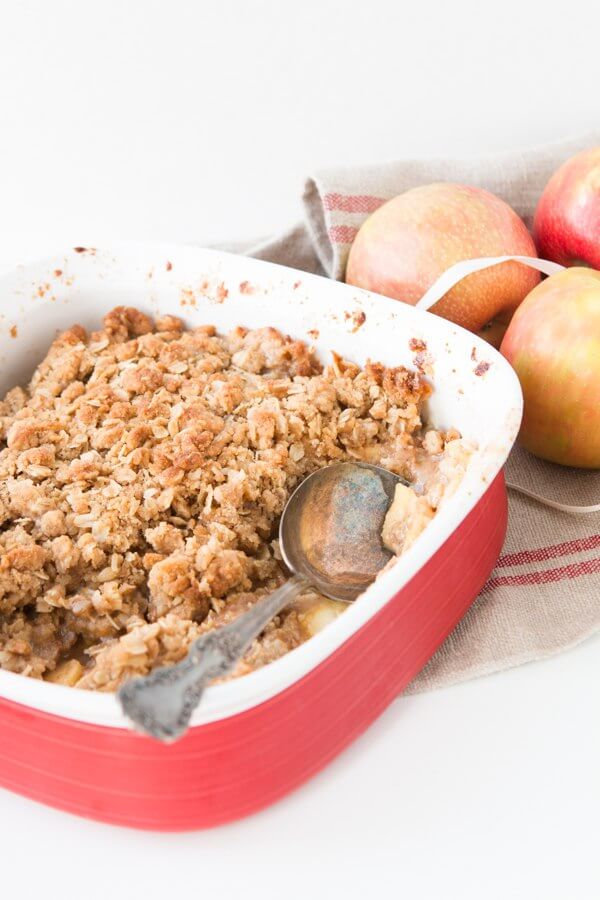 There are probably 5 million recipes out there for apple crisp and this is certainly the season for all of those recipes to be all over Pinterest. Maybe we are a tad crazy to be posting this, but I happen to absolutely love hot apple crisp with a scoop of creamy, melty vanilla ice cream. Cade likes to drizzle a little caramel sauce or dulce de leche over the top of his ice cream but I’m a classics girl so I like it just how I grew up with it.

I have to admit though, I never realized how awful some of them were as a kid. What’s up with Big Jud? Creepy, right? And the men in My Fair Lady are such jerks. They are total chauvinists, and again I had no idea when I was younger. Times are sure different but I still love my musicals, South Pacific, The Sound of Music, My Fair Lady, Oklahoma, Wicked, Singing in the Rain, Carousel, oh my goodness I could go on forever.

Tell me you love them too. What’s your favorite? If you haven’t watched any, well you better get on that or I’m going to be knocking at your door. Seriously. And while you watch them make this homemade apple crisp.

The apples are coated in a heavy cream and flour mixture to make them all saucy and caramel-y (no, that’s not a word but go with it) and then the topping is like a giant, cinnamon oatmeal cookie. It’s wonderful — this is seriously the BEST apple crisp recipe. 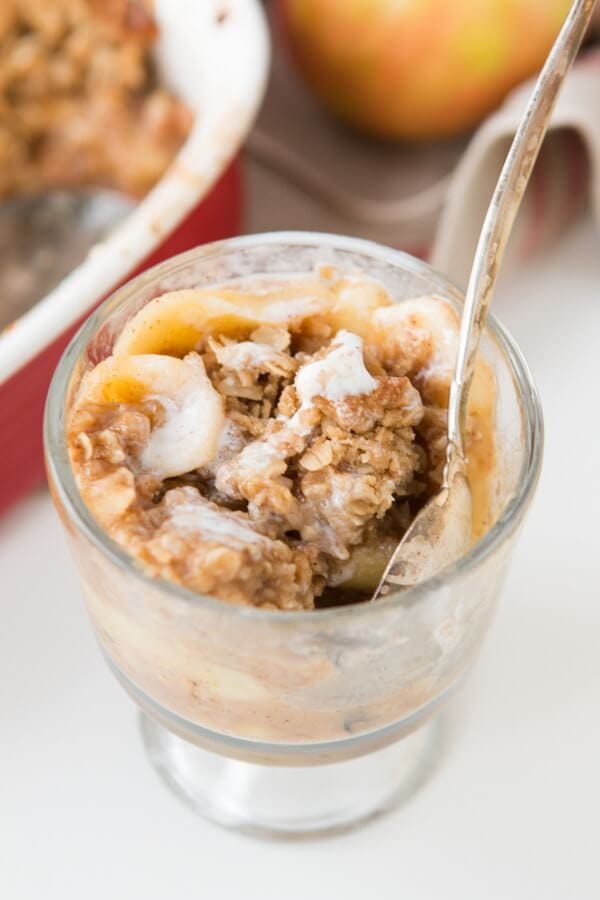 For the crisp topping, you’ll need flour, old-fashioned oats, brown sugar, cinnamon, salt, and unsalted butter. We didn’t want to deviate too far from the classic apple crisp recipe, because why mess with a good thing, right?

What Are the Best Apples for Apple Crisp?

When choosing apples for this easy apple crisp, you want an apple that holds its structure when cooked so you don’t end up with mush. Granny Smith, Jonagold, Honeycrisp, Braeburn, and Pink Lady are all excellent apples for baking. You could even use a blend of baking apples for a more unique flavor, if desired. 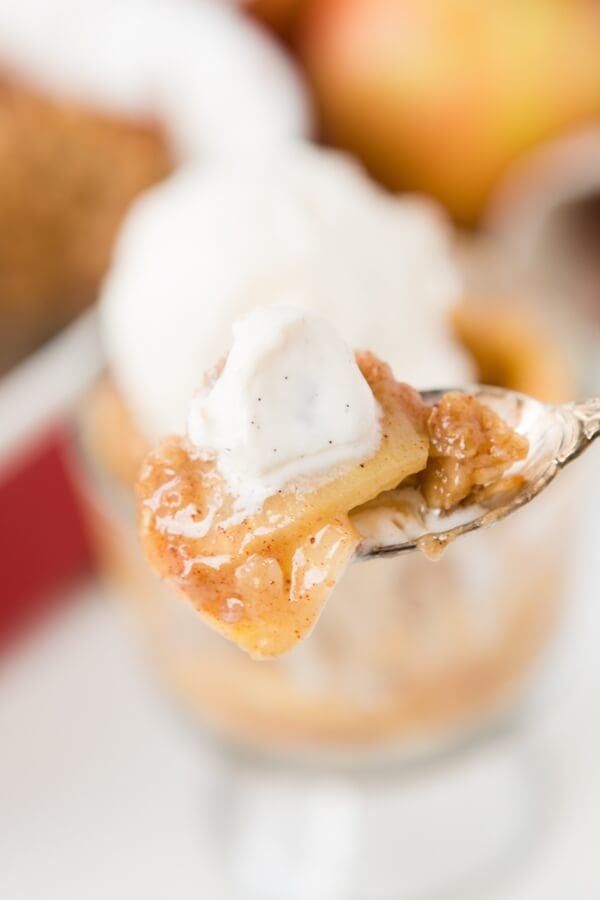 How to Make Apple Crisp

This homemade apple crisp couldn’t be easier to make! You’ll first make the apple filling, then transfer it to a greased baking dish. Then, you’ll make the apple crisp topping. To make the topping, you’ll need to cut the butter into the rest of the ingredients. You can use a pastry cutter or the back of a fork to do this.

Top the apples with the crisp topping and bake until golden brown and bubbling around the edges. You’ll need to wait 10 to 15 minutes before serving the apple crisp since it’s molten hot when it’s first taken out of the oven. If you have some on hand, add a scoop of vanilla ice cream to your apple crisp! 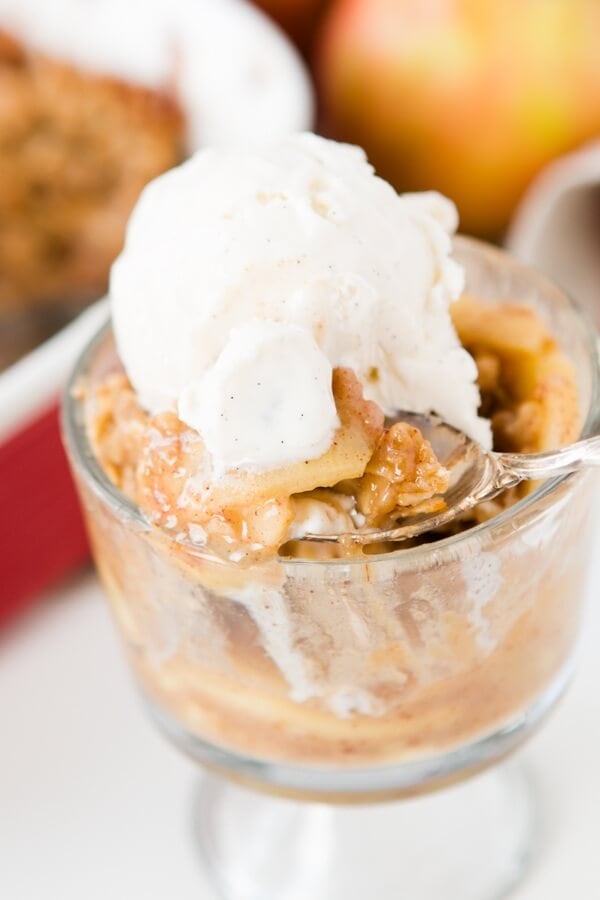 How to Reheat Apple Crisp

You can easily reheat apple crisp in the oven. Simply place the leftovers in the oven at 350ºF for 15 minutes.

Or, you can reheat apple crisp in the microwave. Microwave single servings for 30-40 seconds at a time until warmed through.

How to Freeze Apple Crisp

To freeze apple crisp, prepare as directed, then let it cool completely. Cover it with a double layer of foil and freeze for up to 3 months. When ready to serve, thaw overnight in the fridge and then warm in a 350ºF oven.

Can I Double This Apple Crisp Recipe?

Most likely, yes! You’ll need to bake it in a 9×13-inch pan if you double the recipe, but the bake time should be about the same. 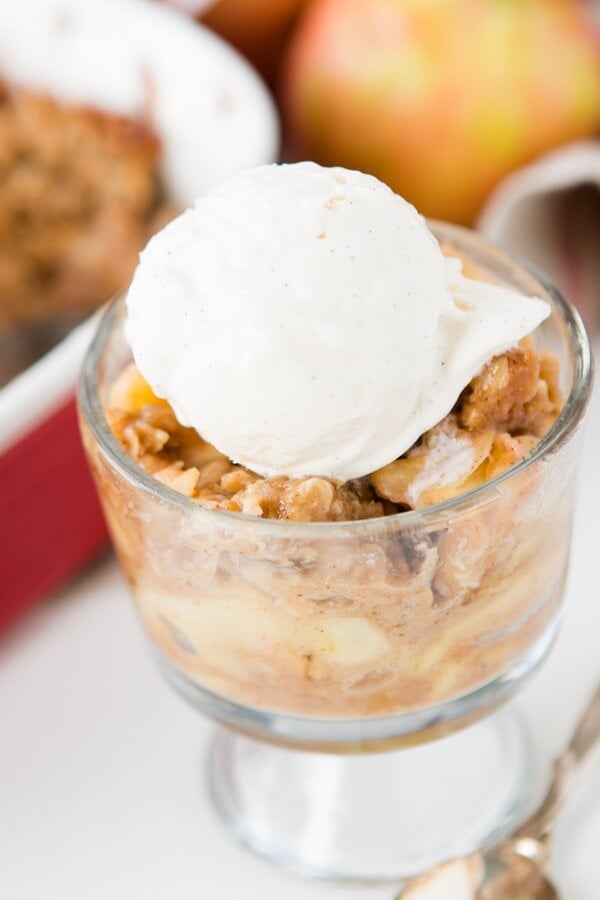 You’ll want to peel and slice the apples quite thinly when making the filling. If the apples are sliced too thickly, they won’t break down very much while they bake and your filling won’t become jammy. But if you slice them too thinly, they’ll turn to mush in the oven. Just use your best judgement here!

After you’ve made this easy apple crisp once as written, feel free to play around with the spices a bit. If you prefer more cinnamon, add more in. You could even add in other warming spices, like cloves and ginger.

Also note that your butter should be cold when you cut it into the topping mixture. If the butter is too warm, the crisp topping with be more like mush and it won’t sprinkle easily over the apple filling. 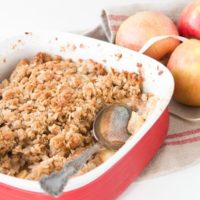 4.54 from 15 votes
Prep Time: 15 minutes
Cook Time: 20 minutes
Total Time: 35 minutes
Servings: 6 servings
Save Recipe Print Recipe
We've tried a lot of recipes out there but this is hands down the best apple crisp recipe we've found and it can totally be made ahead or frozen.