This Irish Beef Stew was a surprising win in the Weeknight Dinners For Everyone category. And moms, it also means you did a St Patrick’s day recipe! 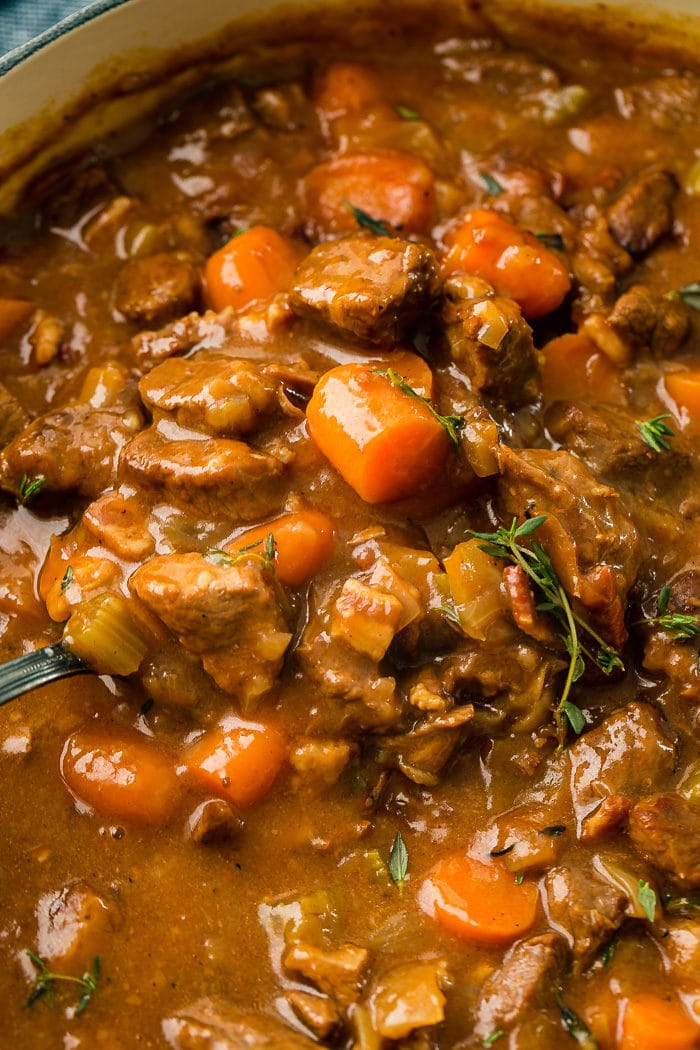 Hold onto your britches, I’m actually posting something for St Patrick’s day! I know, I’m a lame mom that doesn’t go crazy on every single holiday, but this Irish Beef Stew is perfect for the 80% of you who also are not Pinterest moms but still want to make memories with your family.

Now let’s just point out the obvious, this Irish Beef Stew does not have the traditional Guinness Beer which is what normally makes it an Irish Stew Recipe. 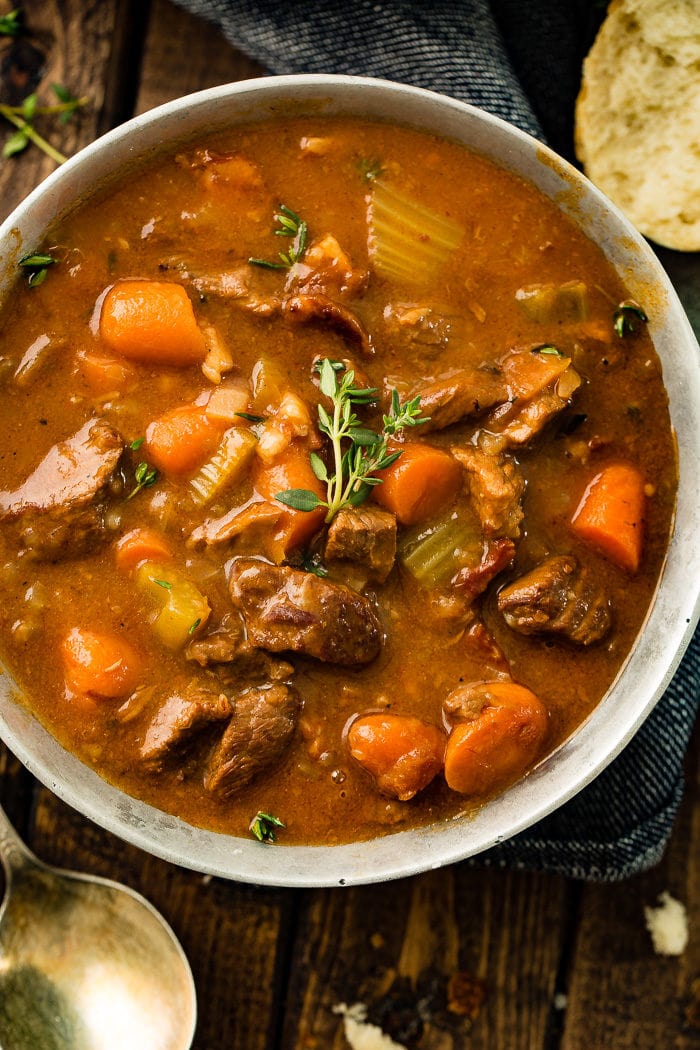 Alright, so here’s how you make it happen. If you’d like to use beer in place of the pop (do you say pop or soda?) just substitute equal amounts. That’s it!

What Beer for Irish Stew?

The darker the alcohol is going to be better, try using a Guinness Beer that is dark.. I’ve read all about it and you can trust me even if I’ve never drank it. That’s the best I can offer. Sorry I’m not more help. But don’t worry, I still know how to cook and this recipe for Irish Beef Stew is still the bomb.com.

(Sometimes I say that in text and it automatically links to a real website which always makes me panic a little. Does the government watch that stuff and know I’m not actually looking up such a thing?!) 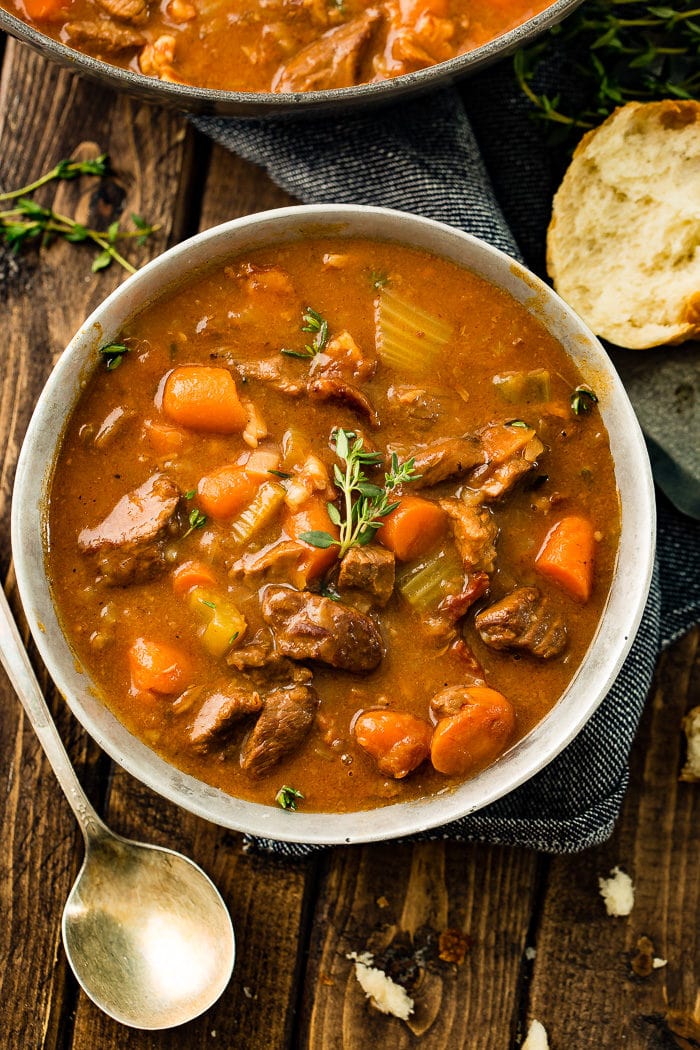 We did a big ol’ comparison of stews a while back, and as I’m a purist I completely expected to be all about the traditional stew, but this Irish Beef Stew totally and completely won my heart over. It is so good!!

An Irish Beef Stew is a very simple combination of ingredients that while slowly cooked begin to transform into a hearty, tender, melt in your mouth stew.

What’s in an Irish Stew that makes it different than a traditional stew? Really nothing other then alcohol instead of straight broth. While our’s doesn’t have the alcohol we did use a dark soda, Coke.

What to Use Instead of Beer in Stew

If you’re like us and you don’t drink, merely substitute Coke and some Worcestershire Sauce to achieve that umami flavor. Don’t worry so much about what you use, beer is fine if that’s what you use, coke is great if you don’t. Both will leave you with the same outcome, a delicious stew with absolutely tender meat. 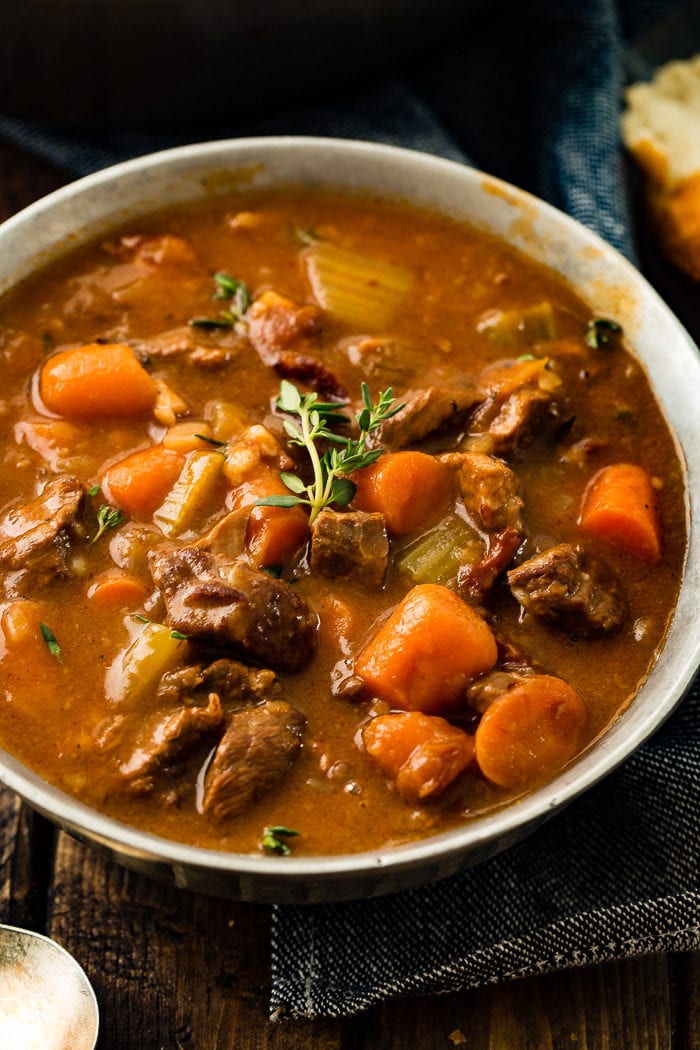 How to Serve Irish Stew

I’ve seen a lot of Irish Stew recipes, but not all are served the same way, so how do you serve Irish Stew?

How to Thicken Irish Stew

A stew should always have a thick consistency in my humble opinion. None of this broth business. Broth is the starting point, but not the ending point. That’s a beef soup, there’s a difference.

To achieve that thick and creamy, but never gloppy texture, use a slurry which consists of cold water and all purpose flour. No other flour should be used as it will not have the same effect.

Whisk the mixture until it’s perfectly smooth then, while stirring add it to the stew and simmer until thickened. 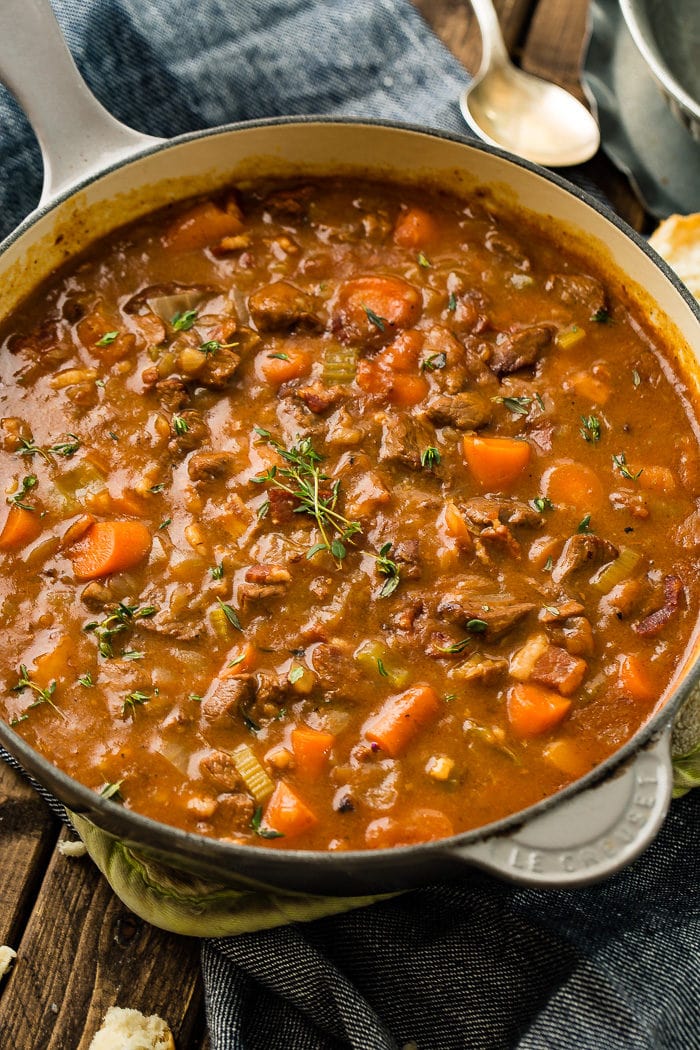 How to Substitute Cornstarch instead of Flour

If you would rather use cornstarch instead of flour that’s totally fine. Just half the water and use half the amount you would normally use if it was flour.

Usually I’m all for making a roux or using cornstarch in sauces, but when it comes to a stew, a slurry of water and flour actually works very well. In fact, I prefer it for a stew. 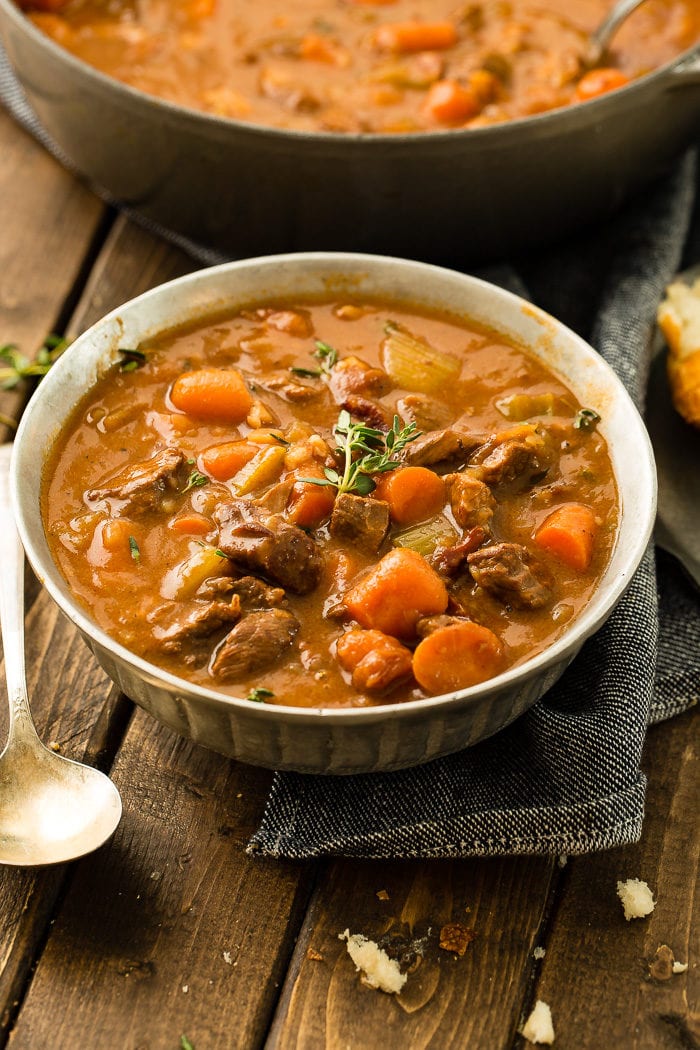 Can You Freeze Irish Stew?

Irish stew is one of the best ideas for a freezer meal. Go ahead and completely prepare the Irish stew and then cool completely. Use a FoodSaver to seal up the stew and lay flat in the freezer for up to 3 months.

When you’re ready to reheat a frozen stew, place it first in the refrigerator to defrost. I know, it’s really tempting to dump a frozen stew into a pot and get it warming up, but that’s actually a recipe for disaster. Soups should always be slowly defrosted and slowly brought back to temperature.

Irish Stew is only gluten free if you choose to go with the cornstarch mixture. If you use the flour slurry it is no longer a gluten free stew. All other ingredients are gluten free so it’s a fantastic meal idea for a family that has food allergies or dietary restrictions. 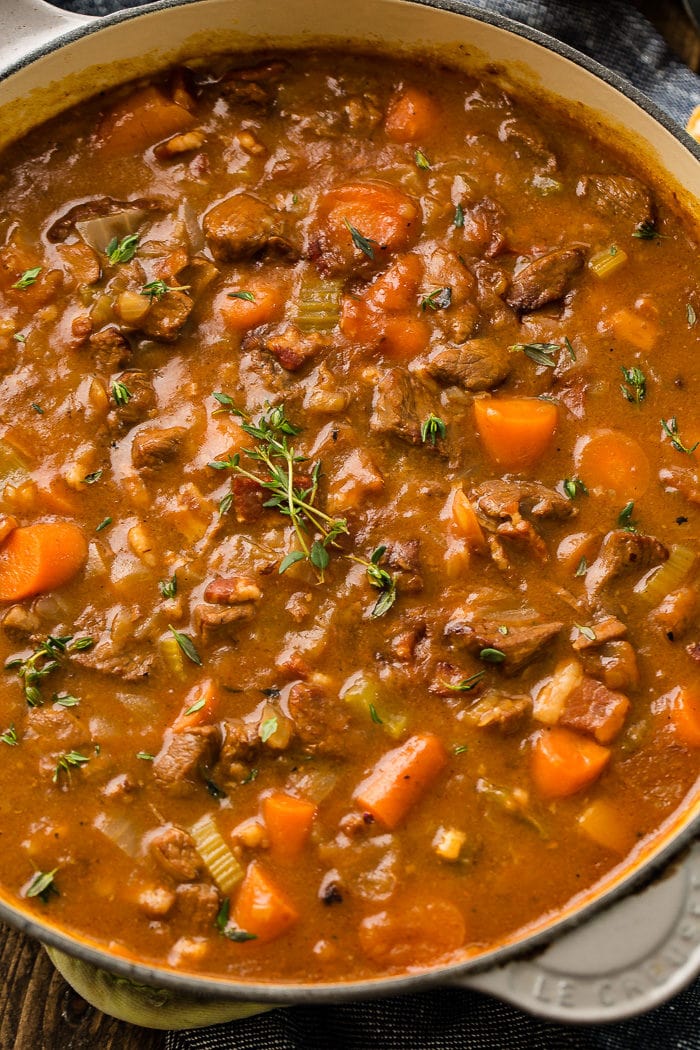 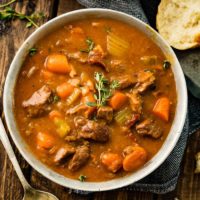 4.75 from 20 votes
Prep Time: 15 minutes
Cook Time: 2 hours 30 minutes
Total Time: 2 hours 45 minutes
Servings: 8
Save Recipe Print Recipe
This Irish Beef stew was a surprising win in the Weeknight Dinners For Everyone category. And moms, it also means you did a St Patrick's day recipe!