Stuffing made easy! Forget the boxed stuff and make it from scratch! It is full of fresh herbs and all the classic stuffing ingredients.

My dad cannot live without canned cranberry sauce which my mom hates but makes him because she loves him and boxed stuffing which they both love. But you all know how itchy it makes me to not have my own homemade recipe so classic stuffing to replace that box at the store is here! 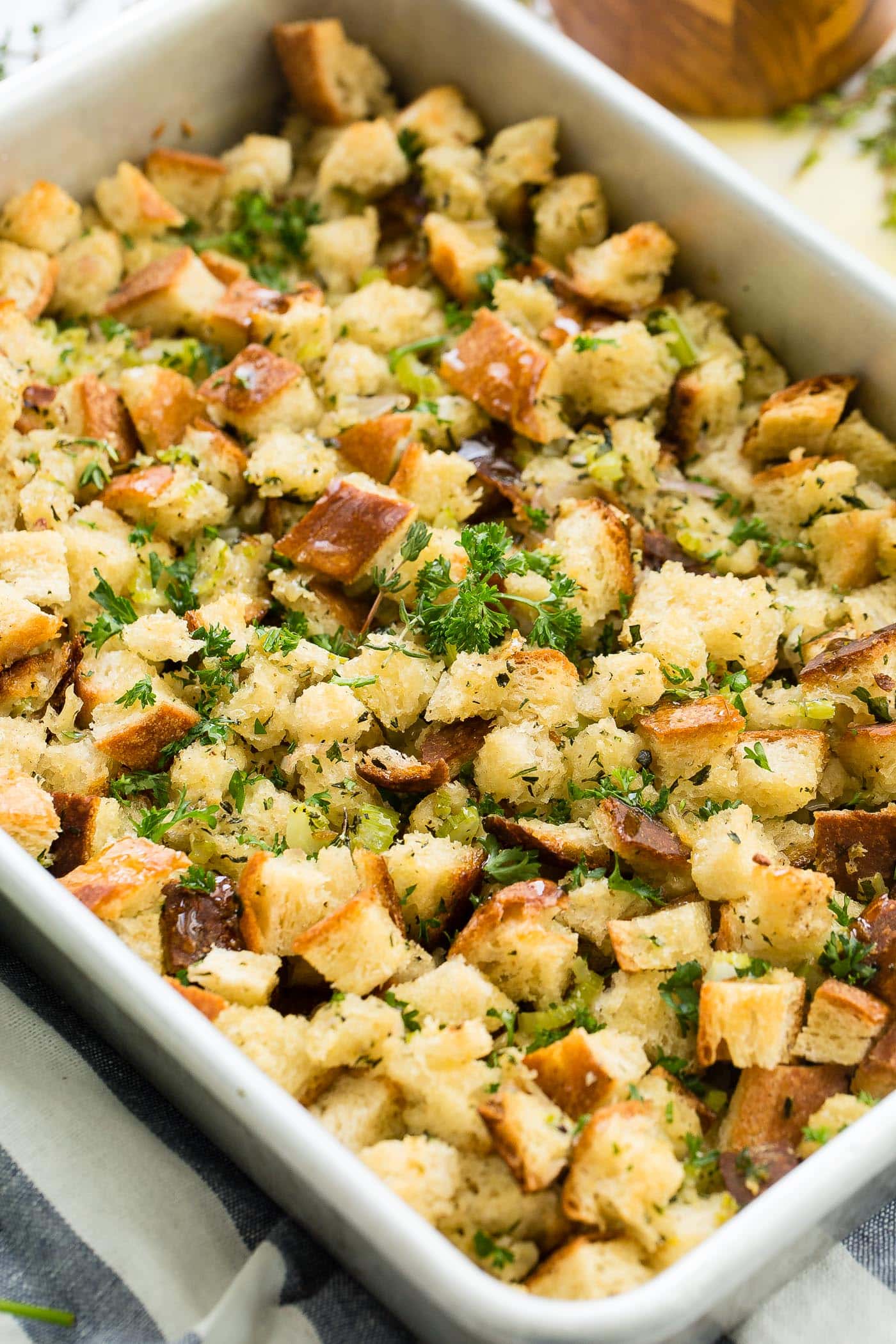 We’ve heard you yelling from the rooftops that you love stuffing. And I know some people are stuffing purists. Just bread, butter, simple veggies, and herbs. This is the recipe for you!

How to Make Classic Stuffing?

Making classic stuffing from scratch is easier than you think! Let me walk you through each step and then answer any questions you might have.

This recipe takes some planning ahead because you have to dry out the bread. Get a loaf of country bread and cut it into 1/4-1/2″ cubes and set it out on a baking sheet to dry overnight. Other types of bread can be used if you want (see FAQ below for other suggestions).

Preheat the oven to 450 degrees and drizzle the bread with oil. Bake the bread for a few minutes until golden brown. Set the bread aside and get to work on the vegetables. Decrease temperature on your oven to 350 degrees.

In a large skillet, melt the butter over medium heat and then add the minced shallots and celery and saute them for about 6 minutes until they are fragrant. Then add the garlic and all the fresh herbs (parsley, sage, thyme, rosemary, and savory), and cook until fragrant for about a minute. Then salt and pepper to taste. 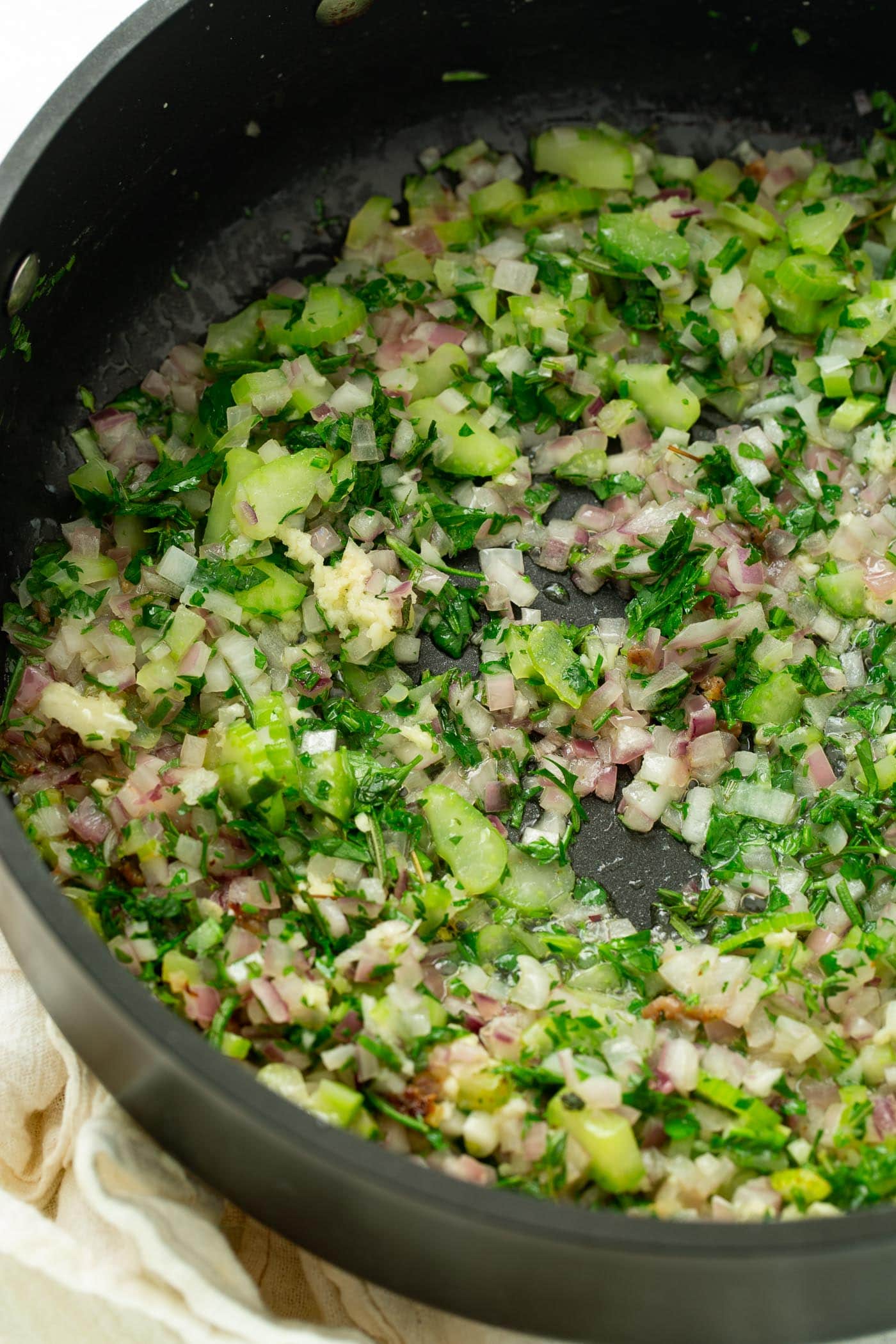 Combine the veggies, herbs and seasonings with the toasted bread and toss together until well combined. Add the broth, give it a healthy dose of salt and pepper and stir until evenly coated. Pour the stuffing into the buttered baking dish, cover it tightly with foil, and bake it at 350 degrees for 45 minutes.

Remove the foil and bake for another 15-20 minutes until it is beautifully golden brown and top with fresh topped parsley.

NOTE: If you are making this stuffing ahead, stop after you wrap the baking dish in foil and store it in the refrigerator until you are ready to bake it and bake it as instructed.

You can also completely bake the stuffing ahead of time and then let it cool completely. Cover it tightly with foil and store it in the refrigerator. Reheat it in the oven at 350 degrees until warmed through. Both methods will turn out about the same. It just depends on what fits better with your cooking schedule. 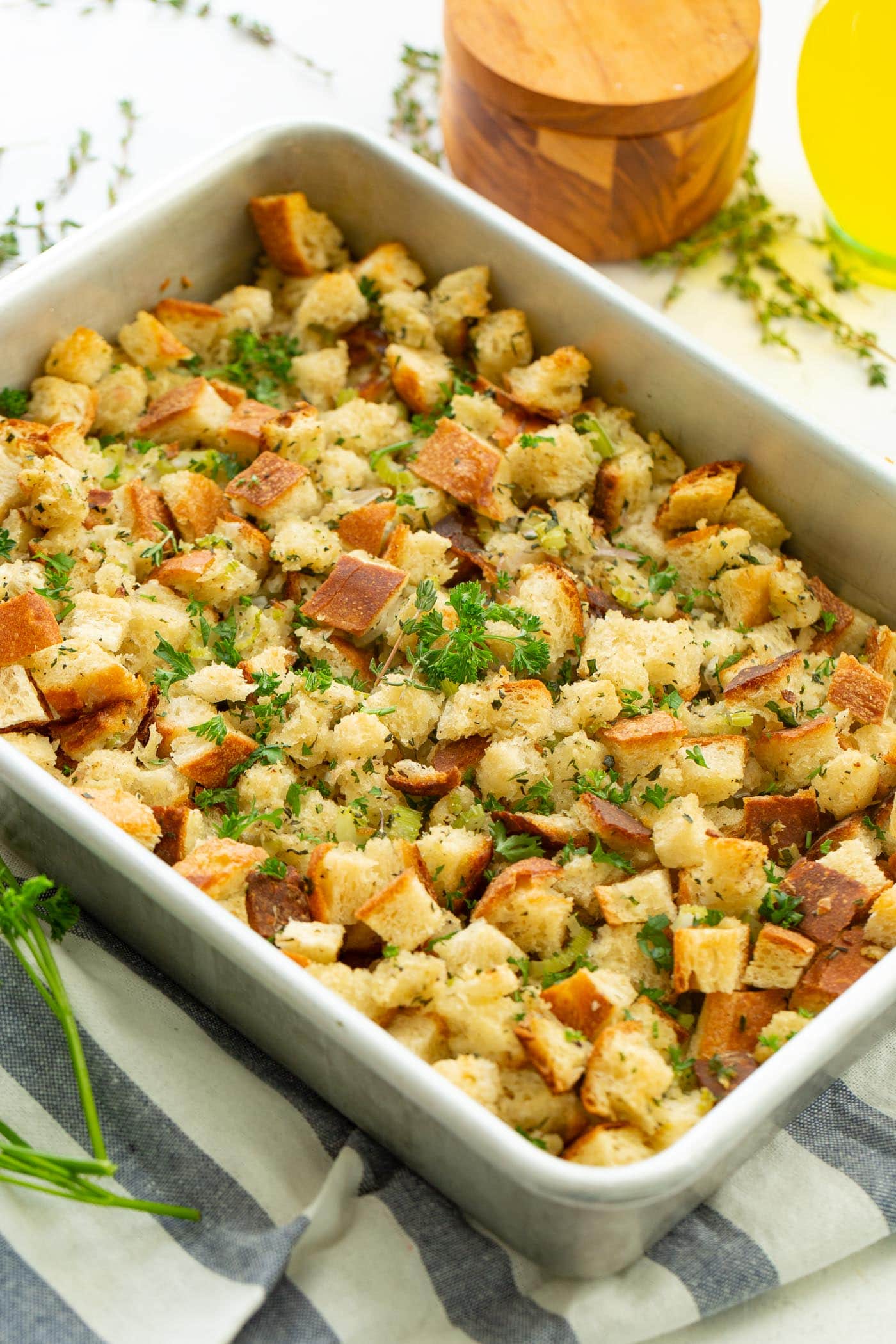 What Makes a Good Stuffing?

This is all according to the world of Carrian, but a good stuffing has to have some crunch and not be soggy. It needs fresh herbs and butter. It needs to be the subtle star of your Thanksgiving spread and be able to hold it’s own against the mashed potatoes, green bean casserole, and sweet potato souffle because I looooovvvveee all those things! This stuffing recipe does and has all these things! 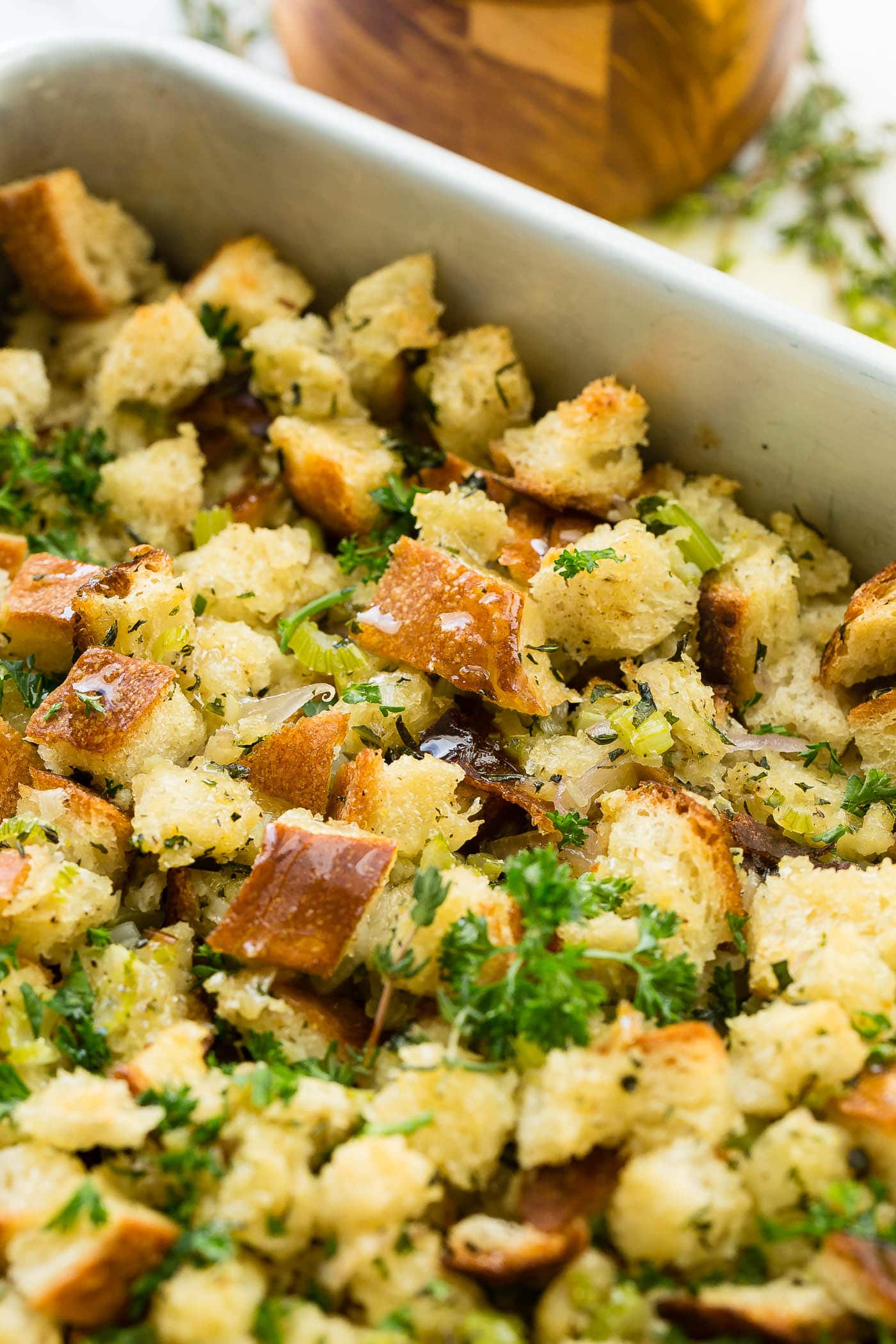 Is Stuffing the Same Thing as Dressing?

Stuffing…dressing…dressing…stuffing…they are the same thing right? But are they? The common consensus is that stuffing is the bread mixture that is cooked inside the turkey or chicken and dressing is the same mixture cooked in a pan. So I guess this recipe should be called no fuss make ahead dressing, but it seems like most people call it all stuffing so I’m going with stuffing.

Do You Put Eggs in Stuffing?

What Kind of Bread is Best for Stuffing?

Stuffing can be made with just about any kind of bread you like. We have found that country bread, a good quality sandwich bread, or French bread hold up the best. Baguettes or sourdough bread are also both good options. Though we have another stuffing recipe where we use cinnamon bread. It just depends on what kind of flavor and texture you are going for!

When Should You Stuff the Turkey?

Never! We don’t stuff our birds with stuffing. We stuff it with onions and lemons and other delicious things to enhance the flavor. Check out our classic roasted turkey post for more details. We make our stuffing separately so it sure to be cooked completely (and not in the cavity of a bird) and so it gets crunchy and delicious.

Is Stuffing A Turkey Safe?

It is safe but in the words of Alton Brown, “just don’t do it!” If everything is cooked to temperature, it is safe to stuff a bird and then eat it, but why? One of the things that I’ve never loved about stuffing is that it is often soggy. I want my stuffing crunchy with some texture! 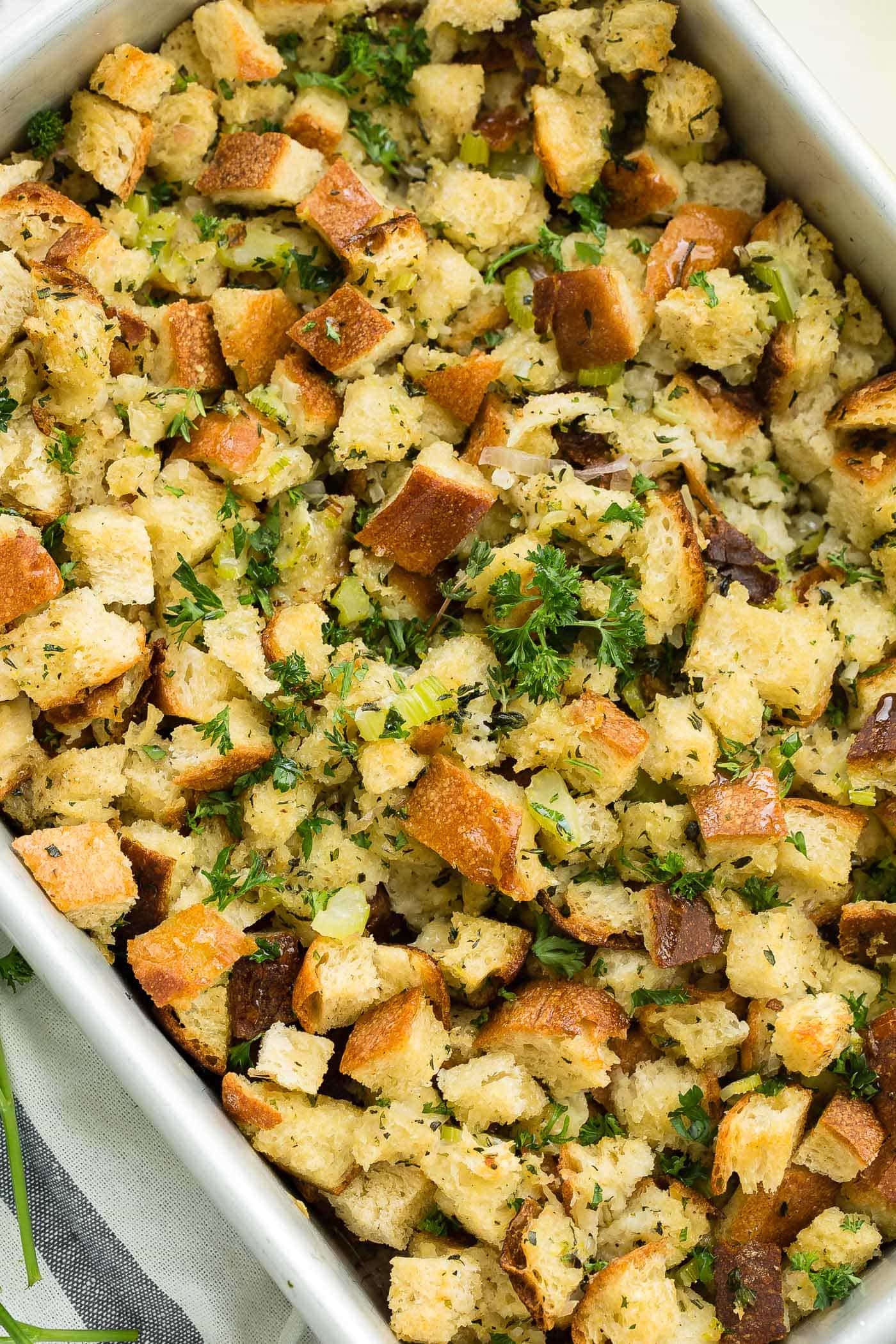 What is for Dessert?

I’m going to cover Thanksgiving sides down below, so let’s get to dessert! Save room for a slice or two (or six) of pie because these are some of the best ever! You have to have a classic pumpkin pie, an apple pie, and pecan pie. Then a few of my less common but most favorites are razzleberry pie, chocolate French silk pie, and Dutch apple pie. It’s impossible to choose just one! 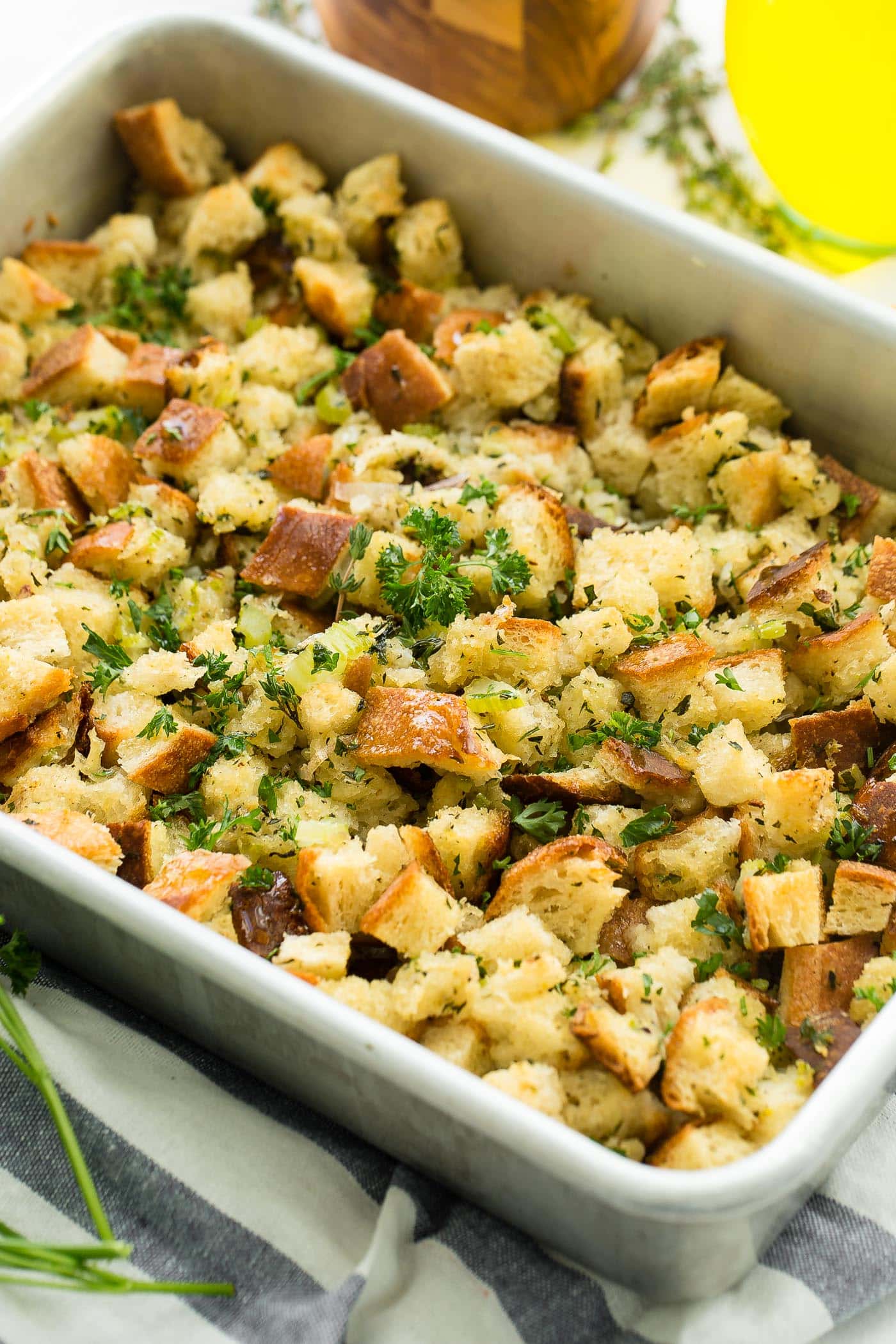 Stuffing purists, this one is for you! It’s classic, simple, and it’s going to be devoured at your Thanksgiving feast. Ditch the box stuff, and make your stuffing from scratch people!!

And you don’t need a turkey, make it with our garlic parmesan chicken during the year! 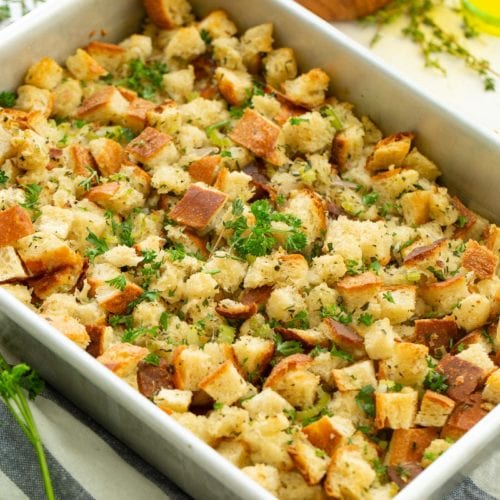 5 from 2 votes
Prep Time: 1 day
Cook Time: 1 hour
Total Time: 1 day 1 hour
Servings: 6
Save Recipe Print Recipe
Make it from scratch! It is full of fresh herbs and all the classic stuffing ingredients.

Store left over stuffing in a covered container in the refrigerator.  Stuffing will keep for 4-6 days.   If you are making this stuffing ahead, stop after you wrap the baking dish in foil and store it in the refrigerator until you are ready to bake it and bake it as instructed. You can also completely bake the stuffing ahead of time and then let it cool completely. Cover it tightly with foil and store it in the refrigerator. Reheat it in the oven at 350 degrees until warmed through. Both methods will turn out about the same. It just depends on what fits better with your cooking schedule.
Nutrition Facts
Stuffing
Amount Per Serving (1 Cup)
Calories 398 Calories from Fat 108
% Daily Value*
Fat 12g18%
Saturated Fat 6g38%
Trans Fat 1g
Polyunsaturated Fat 2g
Monounsaturated Fat 3g
Cholesterol 20mg7%
Sodium 1381mg60%
Potassium 402mg11%
Carbohydrates 61g20%
Fiber 7g29%
Sugar 8g9%
Protein 13g26%
Vitamin A 914IU18%
Vitamin C 18mg22%
Calcium 249mg25%
Iron 6mg33%
* Percent Daily Values are based on a 2000 calorie diet.
Author: Sweet Basil
Course: 200+ Easy Side Dish Recipes Every Mom Needs
Cuisine: American
Keyword: make ahead, stuffing, thanksgiving, thanksgiving sides