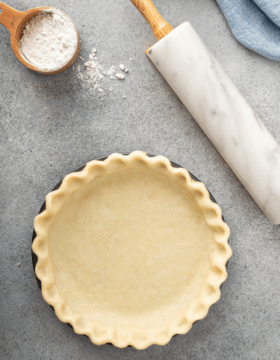 I’m a self-proclaimed pie fanatic and this easy, All Butter Pie Crust is my absolute favorite pie crust recipe! It’s super flaky, easy to make, and comes together quickly! 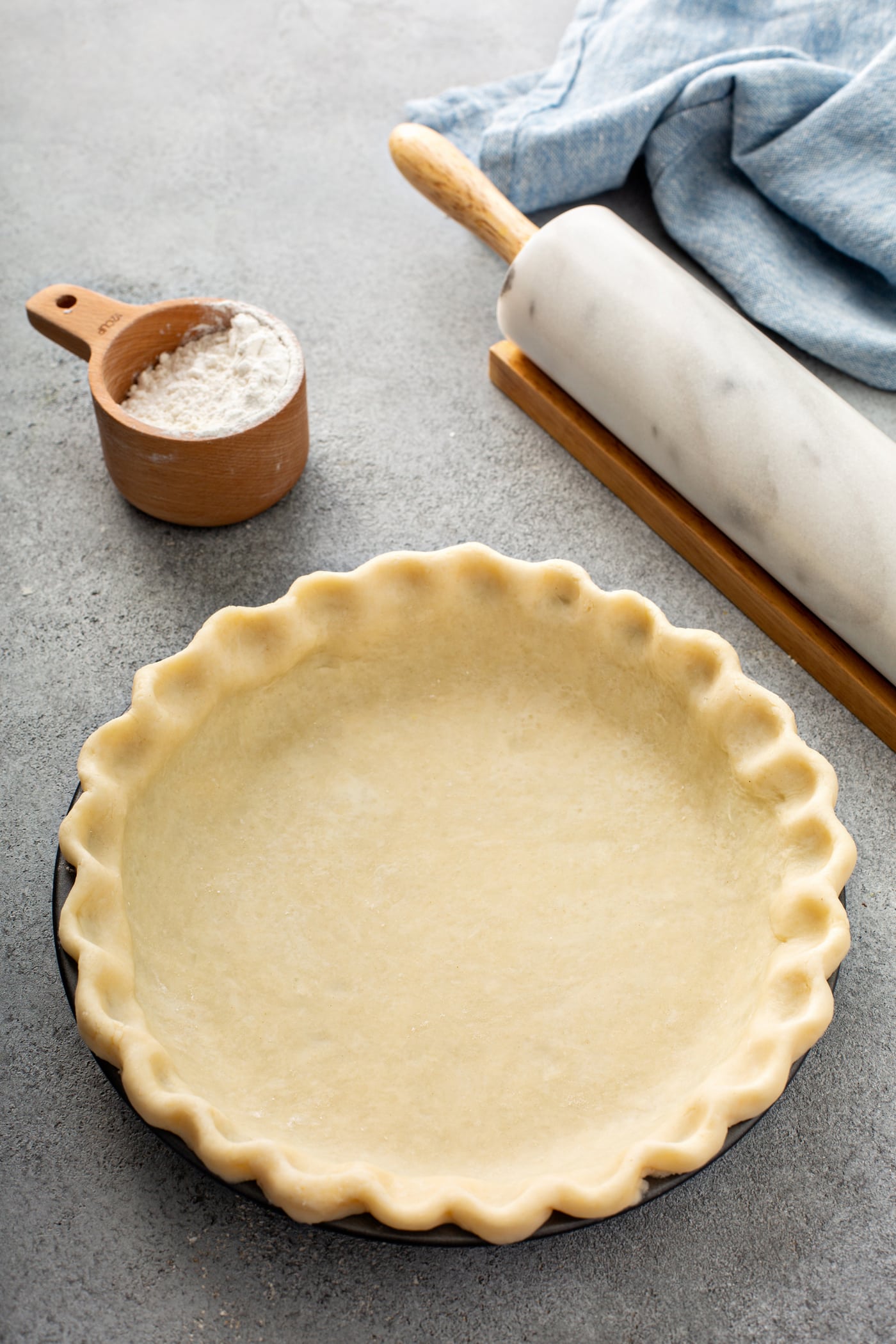 I’m here to teach you how to make a homemade pie crust that will be so easy, so delicious, and so flaky without any stress! Making a pie crust from scratch is one of the most intimidating recipes that a home baker will encounter. A yeast bread is almost equal, and I can not only teach you how to make both, but I can make you an expert!

Your pie crust texture is 100% dependent on the fat that you choose to use. I’ve experimented with it all, and I’ve got a suggestion for you.

If you’re a beginner and you’ve already struggled with making a homemade pie crust, let’s take a step back and make my mom’s fail-proof pie crust recipe. It is so easy and the addition of egg and vinegar along with using cold shortening makes for a really easy pie crust recipe.

However, if you’re really looking for the best pie crust recipe that’s not difficult and really brings flavor and texture, well that’s an all butter pie crust. 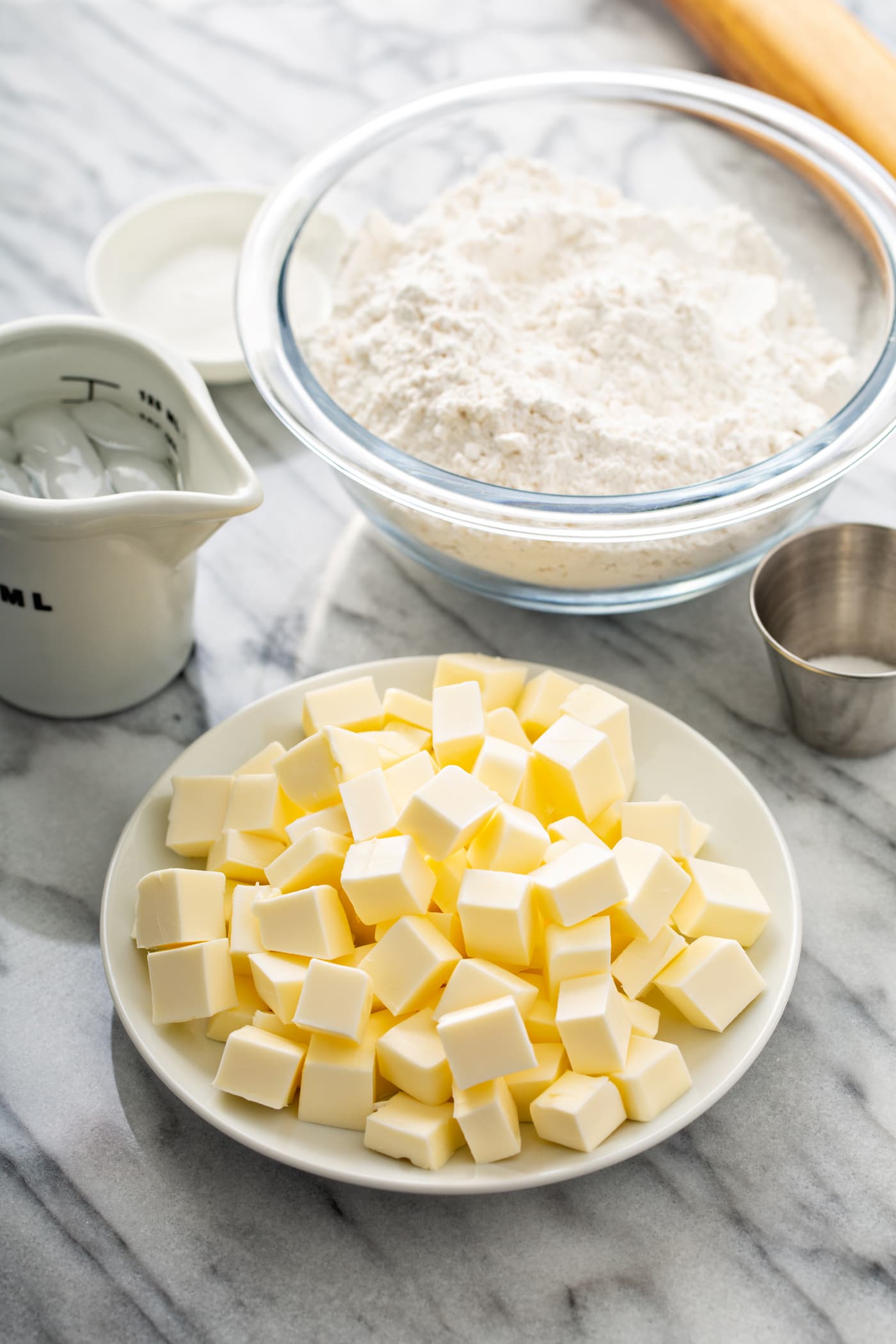 Ingredients in an All Butter Pie Crust

Making a flaky pie crust is one of the most basic recipes with perfectly basic ingredients:

You’ll notice this recipe adds a touch of sugar, which I’ve found does not sweeten the crust but does create a flakier, more golden crust.

Keep reading to find out why I made this an all butter pie crust recipe! 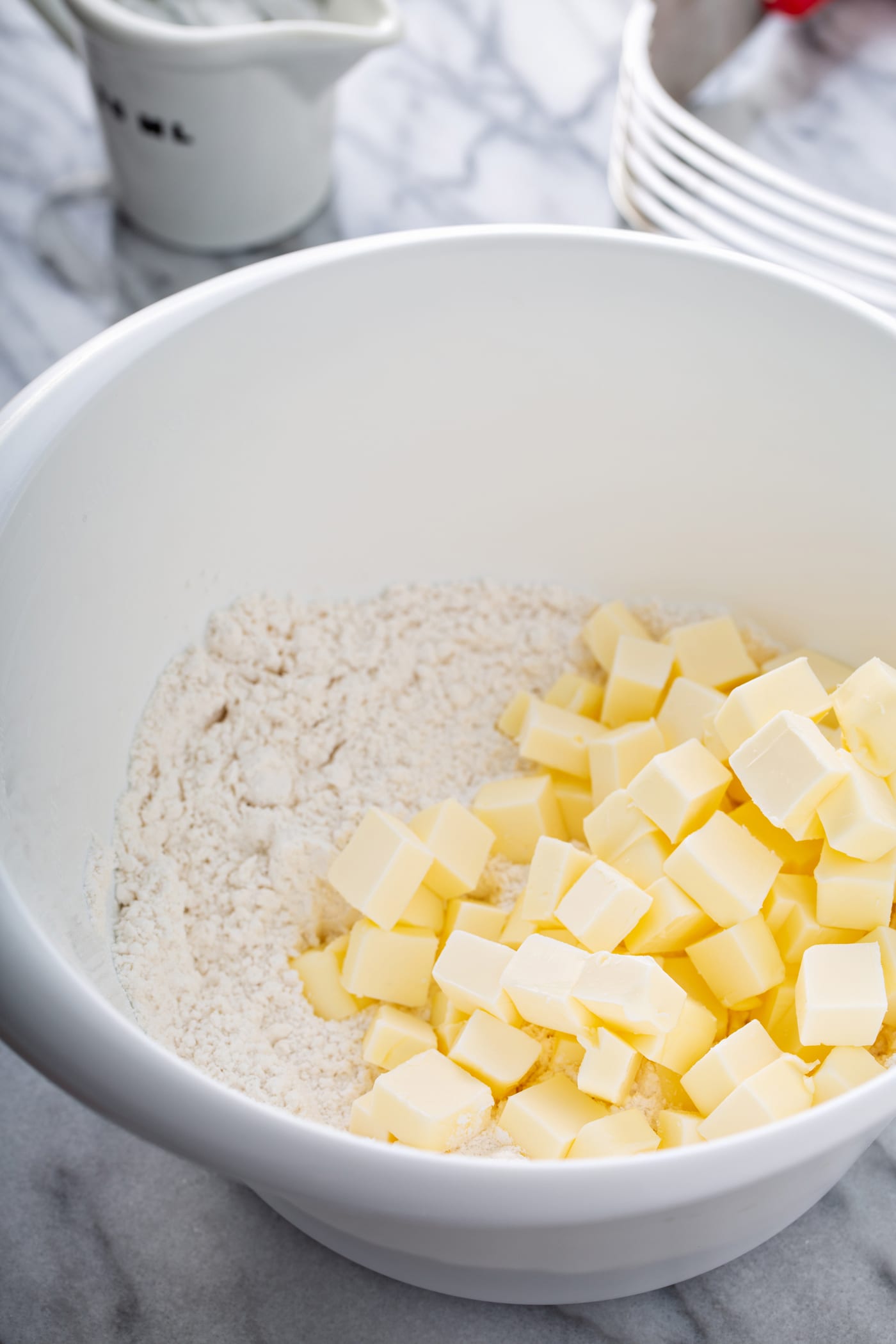 There are a few different fats that you can use for a pie crust. I’ve used lard a few times, but honestly I don’t find it to be worth it. Here’s a breakdown of each fat and why I’ve settled on butter.

I have absolutely nothing against shortening. It’s cheaper to buy than butter, so there’s that going for us. Sometimes I use both shortening and butter so that I can get in the flavor but still end up with a decorative crust.

Ahhhhh, the best ingredient in all the world. I love the flavor, I love the texture of the flaky crust and I love that I always have butter on hand. 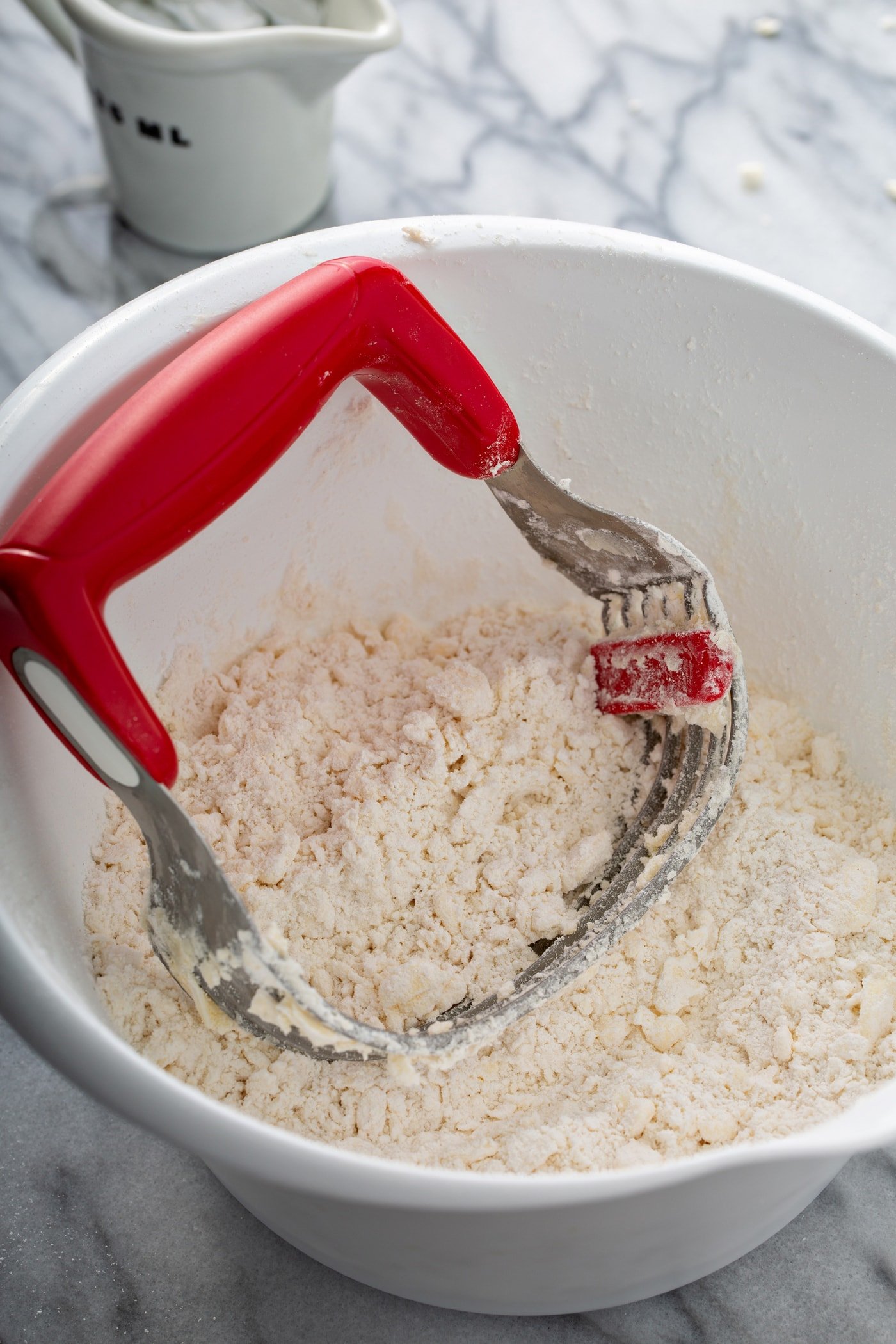 How to Make a Pie Crust From Scratch (with Photos!)

Step 1: Make sure your fat is in the fridge keeping chilled. Place the flour, salt and sugar in a large bowl and mix to combine.

Step 2: Quickly cut the butter into large chunks and add to the flour. Cut in using a pastry blender depending on what you’ve decided on above. 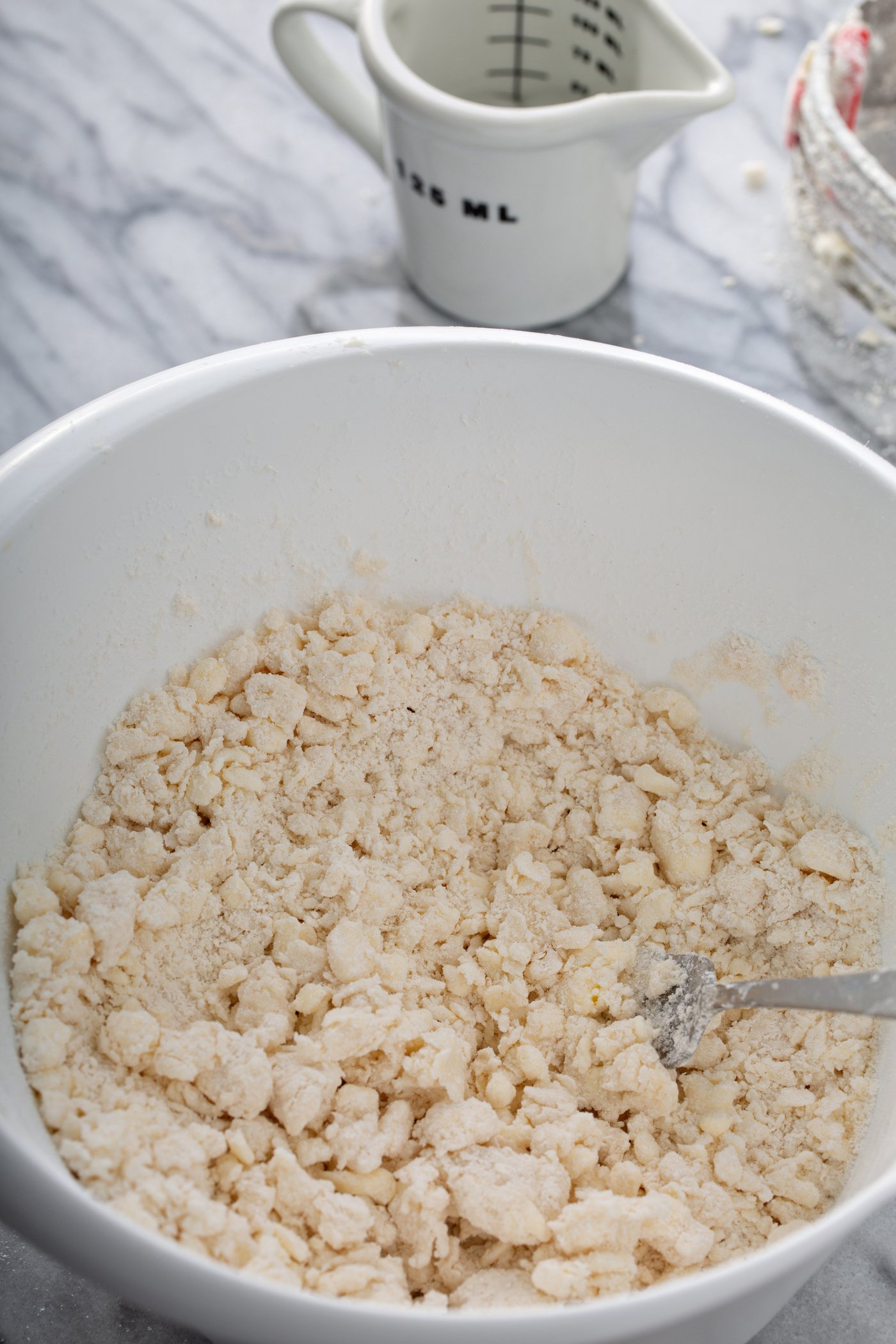 Step 3: Fill your measuring cup with ice and water to keep it extra cold and create a well in the center of the flour and quickly add using tablespoons and stirring together with a fork until the dough is just starting to come together but is still very shaggy and floury.

Step 4: Place plastic wrap on the counter and dump the dough and flour bits out. Gather into a ball as best you can and wrap tightly in the plastic.

Step 5: Place in the fridge to chill again for a few minutes before using. 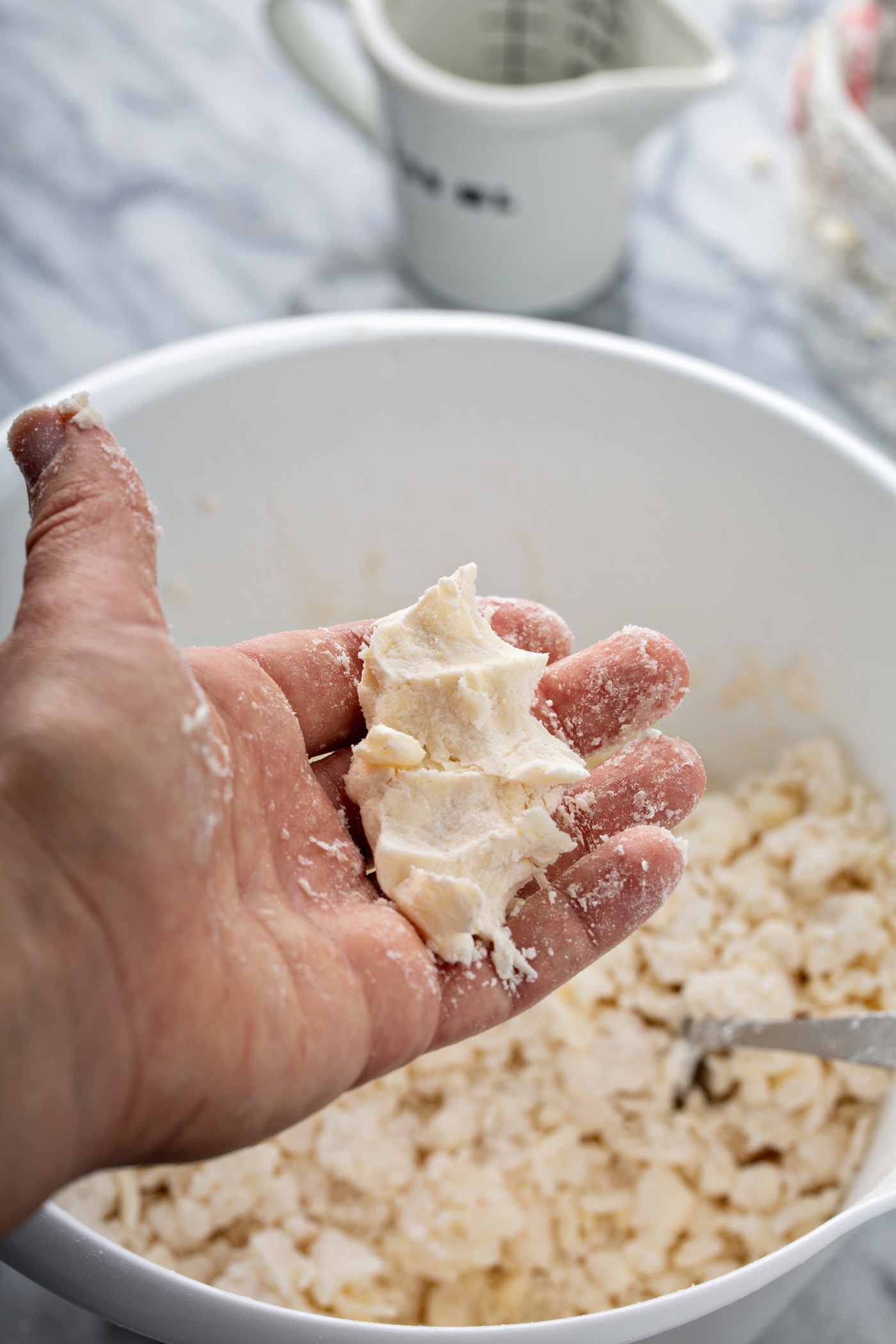 Tip: Do the squeeze test and if it stays in your hand the pie crust is ready even though it looks shaggy in the bowl. Also, when you form it into a disc, a marble slap can help keep it cool. 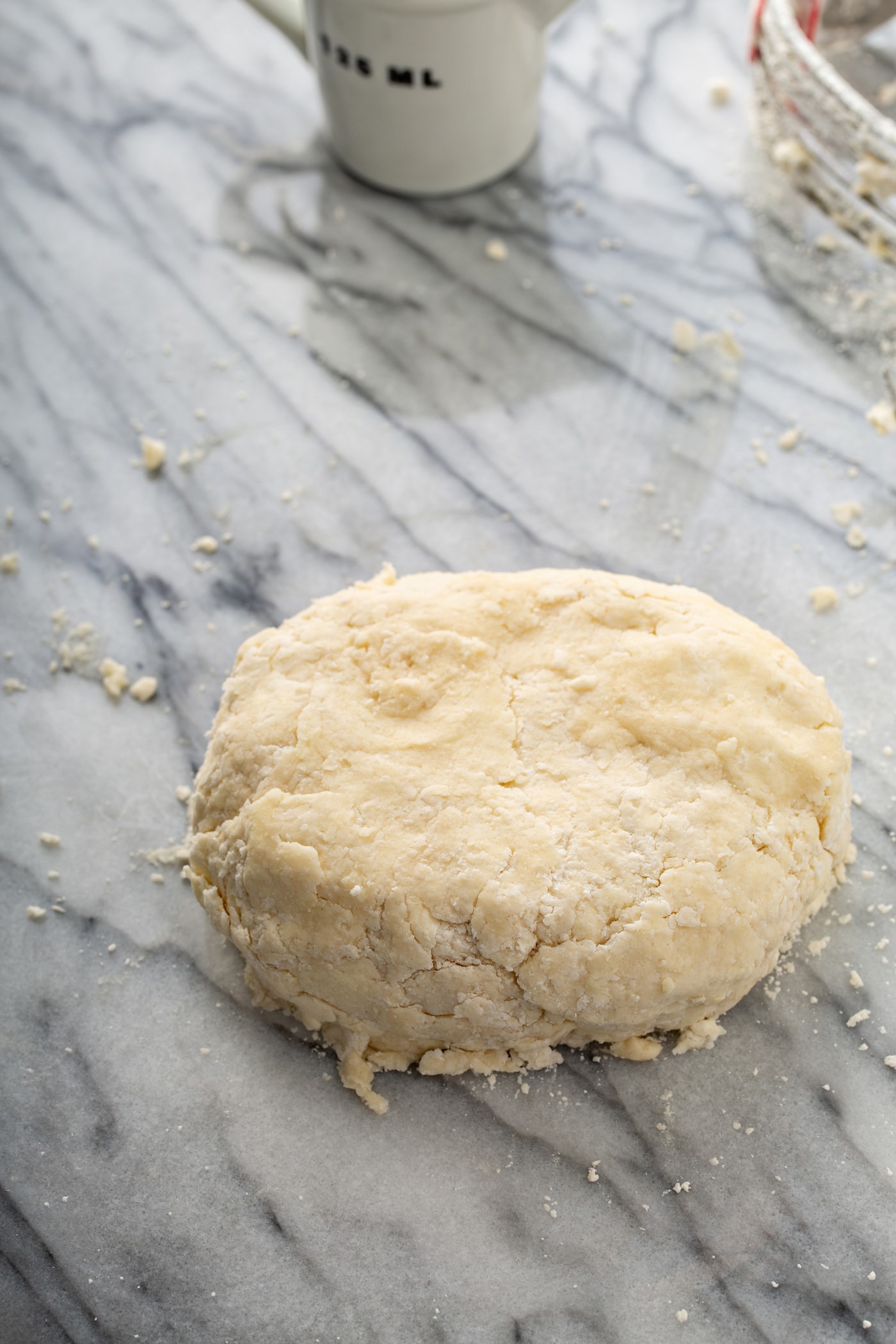 Wrapping the pie dough in plastic wrap keeps the dough from drying out and allows it to chill in the fridge so that the butter isn’t melting in the crust. 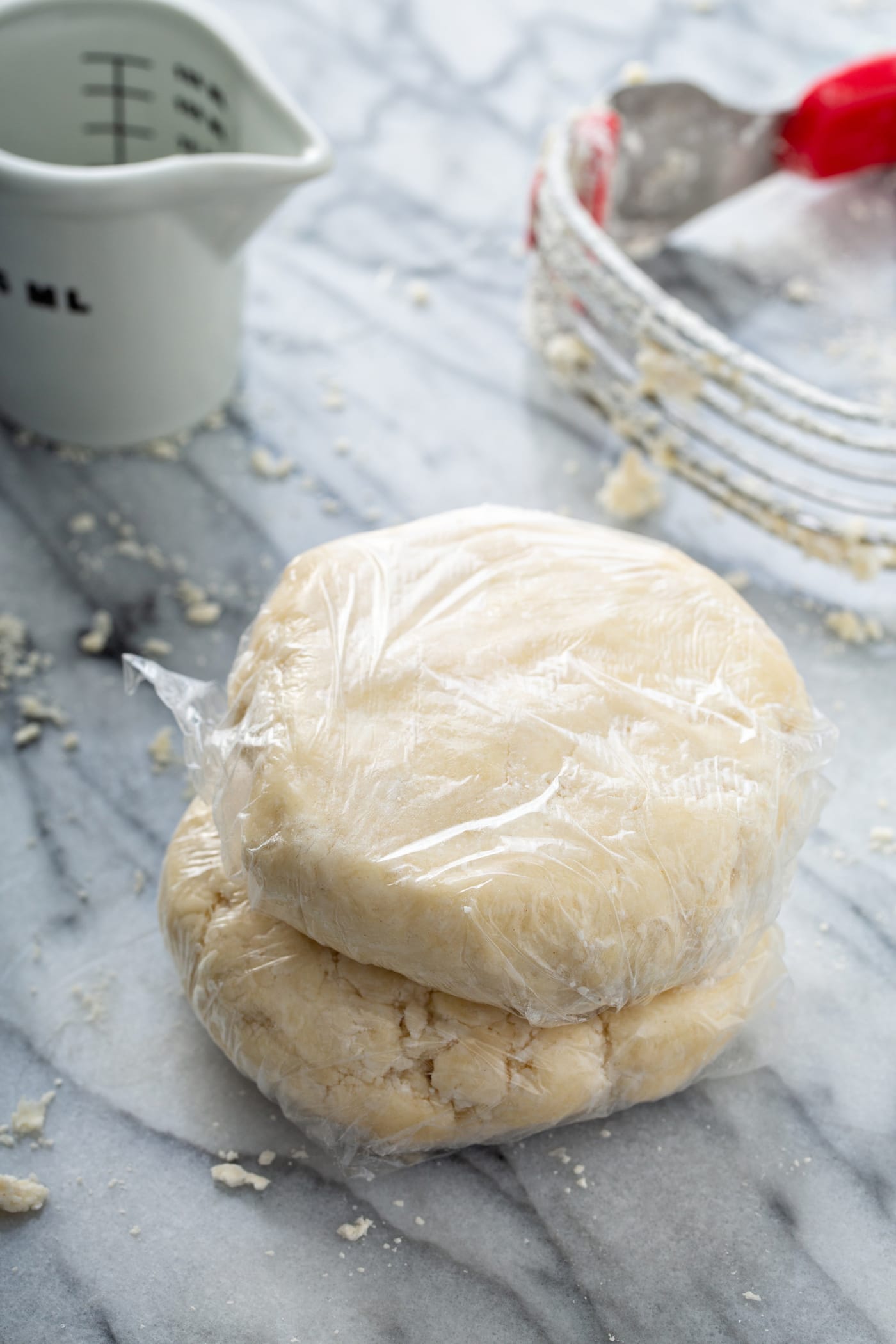 Picking the Best Pie Crust for Your Pie

First, tell me what kind of filling you’re going to be making. Ahhhh, you didn’t think I’d be asking that, right? The way you make your pie crust is determined by the filling. Here’s why:

When to Make a Flaky Pie Crust

Flaky crusts are best for fruit pies, like our razzleberry pie. You want that tender, lofty flake when paired with a fruit. Flaky crusts are made by leaving the fat in larger pieces in the crust – the size of walnut halves or slightly smaller.

Why? Larger pieces of fat begin to evaporate moisture when the pie goes into the oven and the evaporation creates steam which forms air pockets in the crust, creating a flaky final texture

When to Make a Mealy Pie Crust

Mealy Crusts are best for cream or custard pies, like our French silk pie, because it won’t get soggy as the pie rests. Mealy crusts are made by mixing the butter into smaller pieces — the size of peas or smaller. Less evaporation occurs, making a tighter, firmer crust.

Here’s a great example. When making a pot pie crust you would choose which kind of pie crust?

It’s not a fruit, but it’s not a custard either…

You’re right, still go with a more mealy crust because you want that sauce inside to not destroy the crust! Make sense? 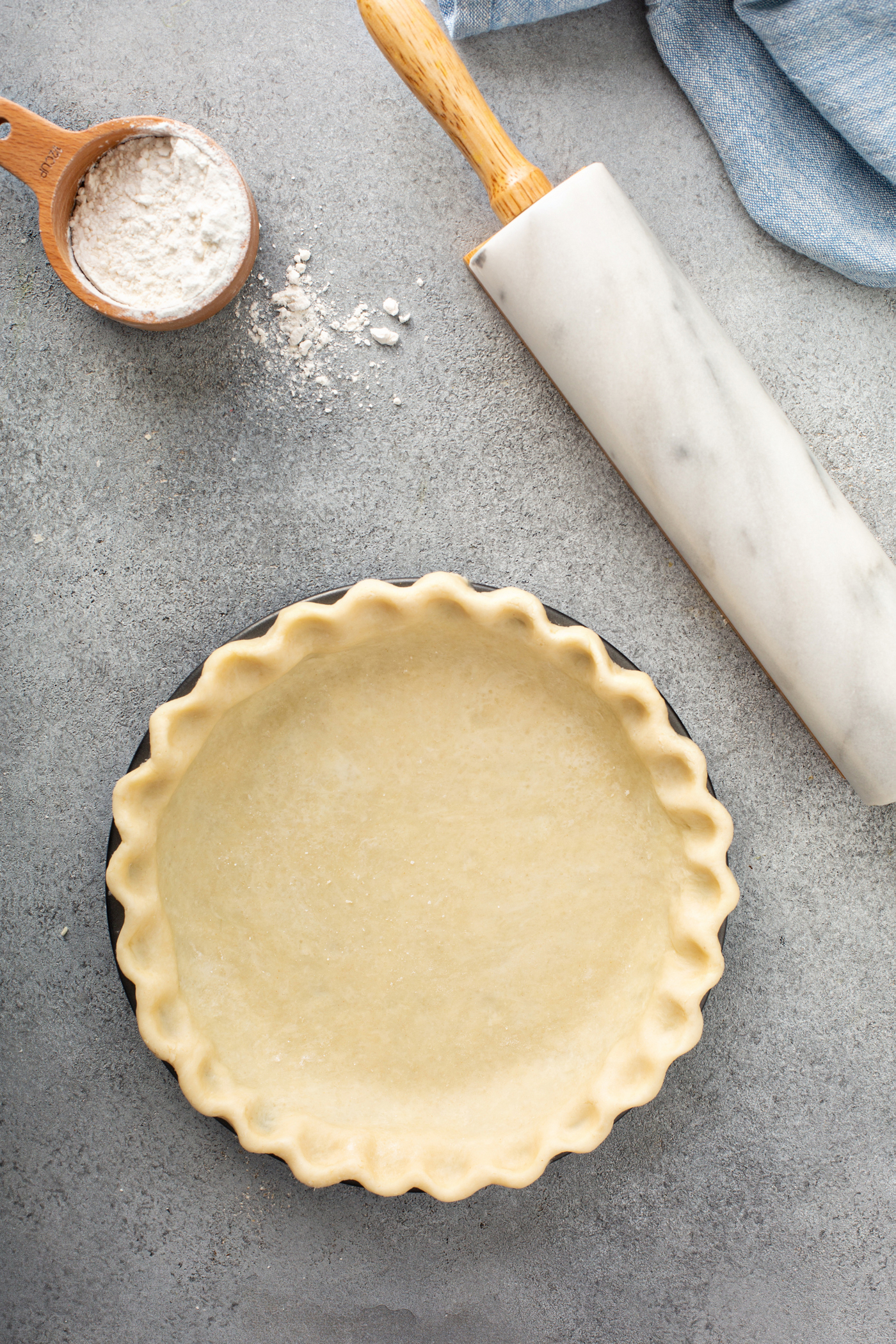 Should I Use an Egg Wash on This Pie Crust?

Why use an egg wash for pie crust and is it necessary? I think so! You cannot achieve that beautiful, golden, shiny crust without an egg wash.

Why Is Pie Crust Too Crumbly To Roll Out?

If the crust is crumbly and hard to roll, it is too dry. Add a few sprinkles of cold water, until the dough is evenly moist. Do not handle the dough too much.

Why Does Pie Crust Shrink?

Pie crust shrinks when the dough hasn’t been “rested” long enough. Resting time allows the gluten to relax , and will play a big role in preventing shrinking. 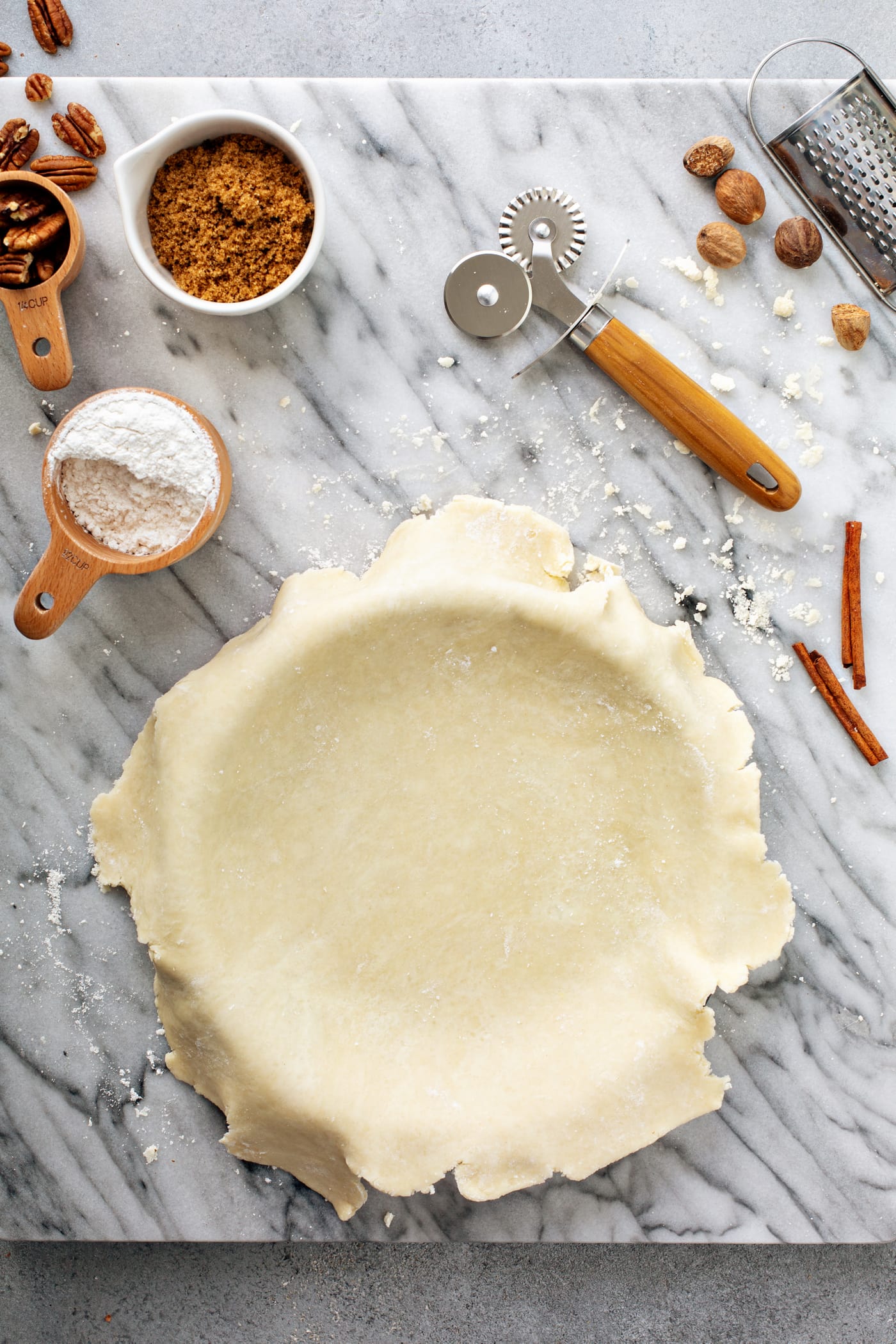 How to Crimp Pie Edges

I learned how to crimp a pie crust edge when I was growing up and because of that I haven’t really thought much of it until I needed to teach my own daughters.

To crimp the edges: Using the index knuckle or finger of one hand, push the inner edge out while pinching the outer edge in with the thumb and index finger of the other hand.

How to Blind Bake and Avoid a Soggy Pie Crust

The best ways to avoid a soggy pie crust are to blind bake with both a docking and weights method followed by an egg wash and further baking. For all the details, check out or lemon meringue pie recipe.

Can You Freeze Pie Crust to be Used Later? 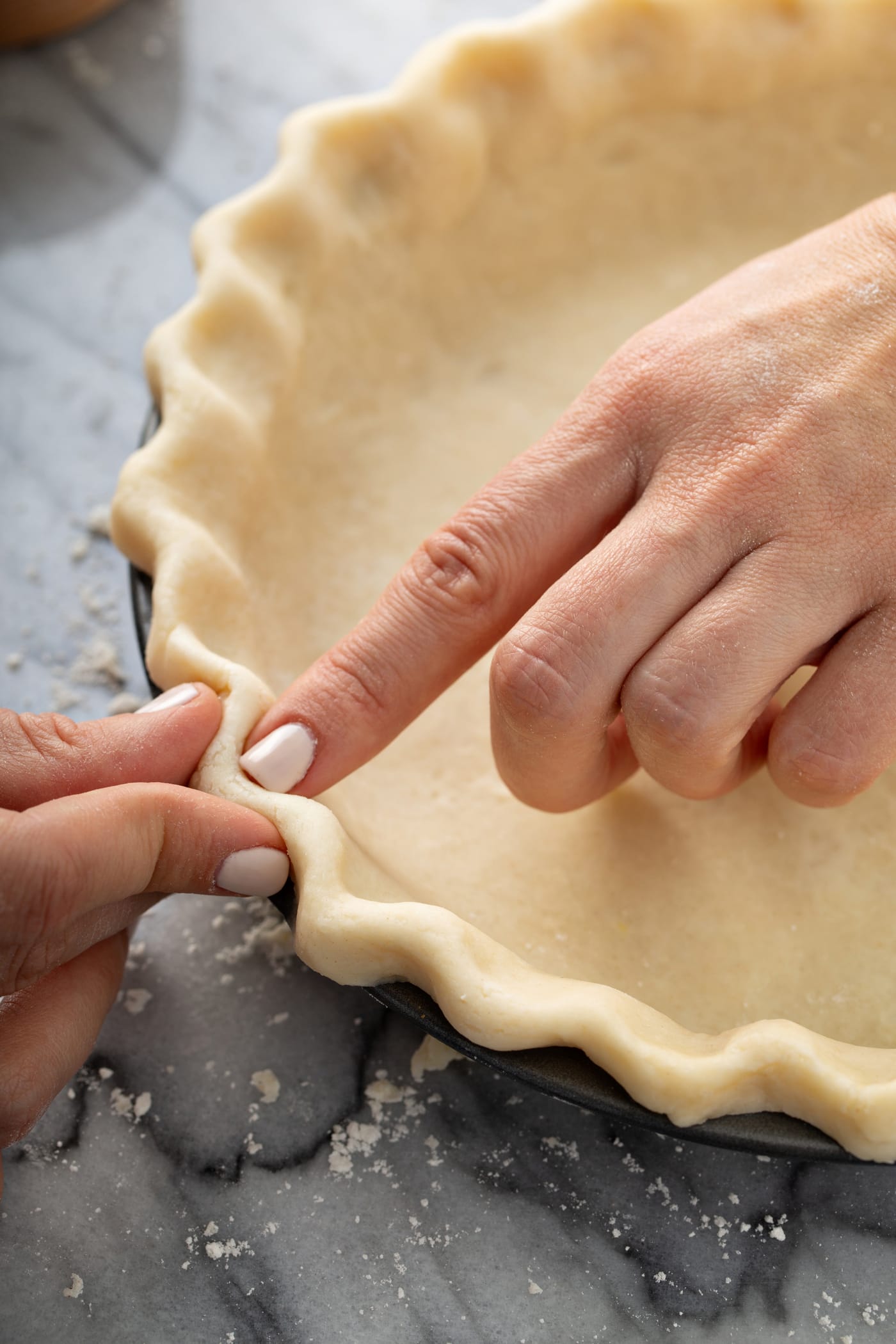 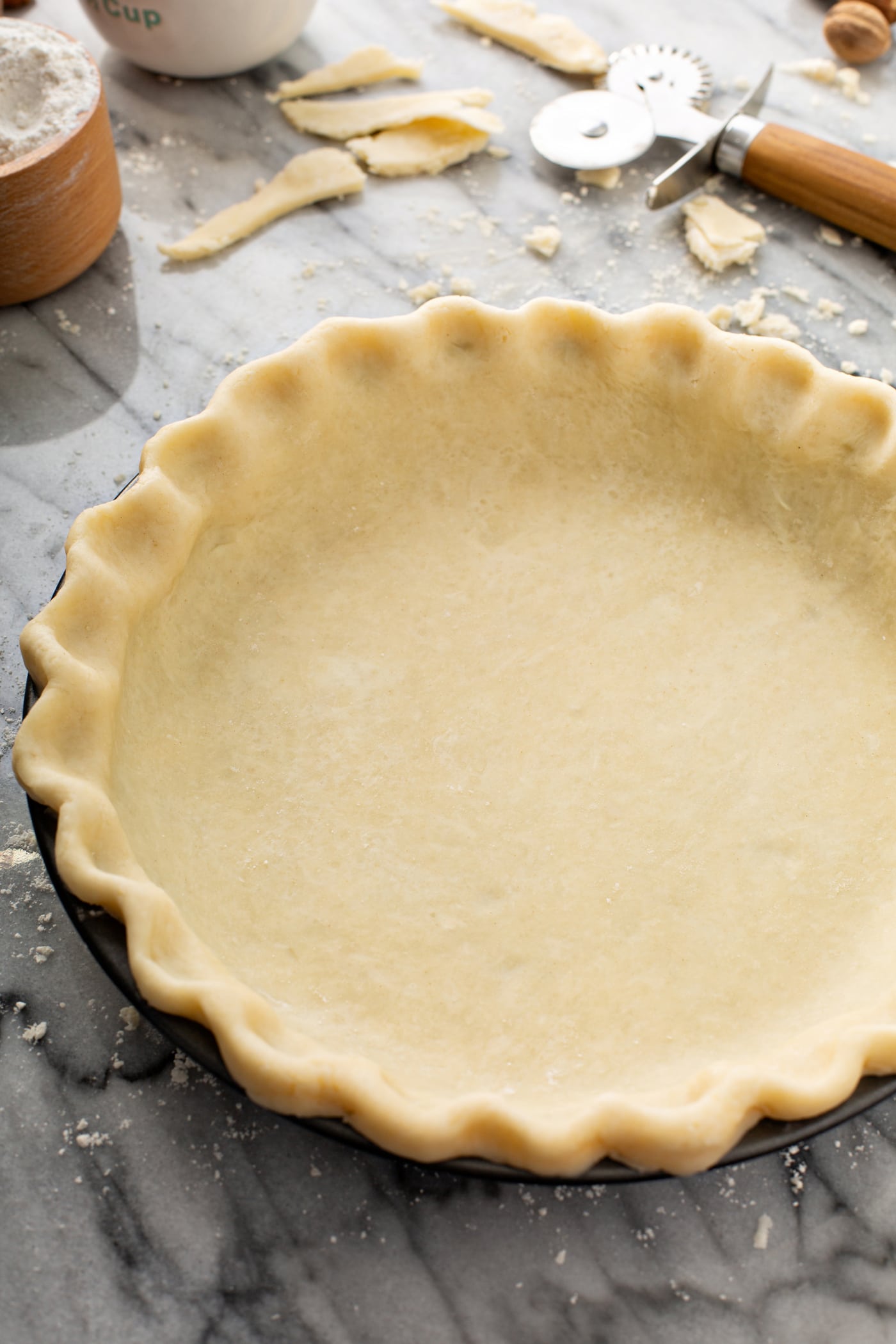 Whether or not you’re a pie fanatic you’re going to want these few essentials to ensure your pie turns out. 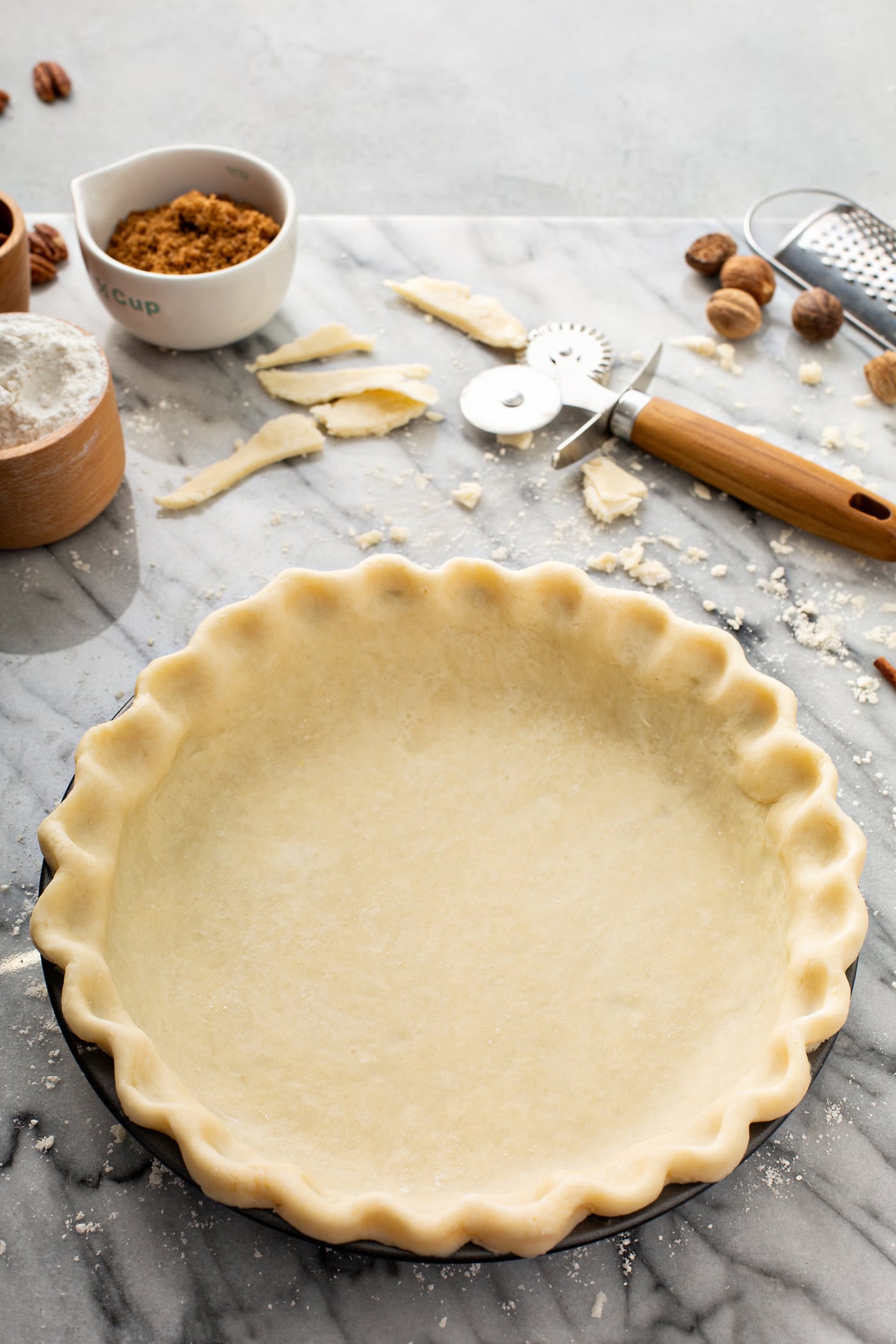 You’re never going to need another pie crust recipe again! This one is so buttery and flaky and perfect! I would almost just eat the crust plain, but why would I do that when I fill it with even more deliciousness?! 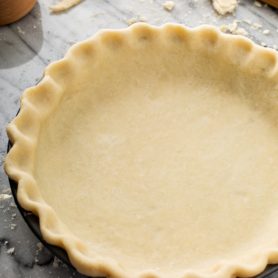 *I like to fill a glass measuring cup about half way with ice cubes and then fill the rest with water. Then I just a tablespoon to measure out the ice water into the well I created. **Pie crust can be made ahead and frozen for up to 2 months. Allow to thaw completely on the counter before rolling *** How to Blind Bake a Pie Crust - head to our Lemon Meringue Pie post for all the details on blind baking a crust.
Nutrition Facts
All Butter Pie Crust
Amount Per Serving (1 g)
Calories 348 Calories from Fat 207
% Daily Value*
Fat 23g35%
Saturated Fat 15g94%
Cholesterol 61mg20%
Sodium 495mg22%
Potassium 49mg1%
Carbohydrates 30g10%
Fiber 1g4%
Sugar 1g1%
Protein 4g8%
Vitamin A 709IU14%
Calcium 13mg1%
Iron 2mg11%
* Percent Daily Values are based on a 2000 calorie diet.
Author: Sweet Basil
Course: 500+ Best Dessert Recipes, Dessert
Cuisine: American
Keyword: pie crust