This is a Pork chile verde recipe made of tender pieces of pork that simmer in a tasty sauce created from roasted chiles and tomatillos. We love it served over rice with a side of beans.

This was an accident. The happiest accident in 2020 and I think that deserves some kind of medal, amiright? I was setting out to make a braised pork recipe, lacked pretty much everything I needed and so I combined it with a pork recipe that’s from Brazil.

The first time I made it I only had two small pork tenderloins and so I had to use bacon as well since I was lacking the fat from a pork butt (note- you can totally sub those if you need to). It turned out awesome and although I use pork butt now I still throw in the bacon because I love how much more flavor it gives!

This is one of those heavenly dishes you’ll want to follow exactly as written, at least the first time and then serve it just as I suggest. If possible even locate the traditional farofa from Brazil as well. Our is found in little world markets here in Utah. You just pile rice, beans, chile verde and a sprinkle of farofa on top. 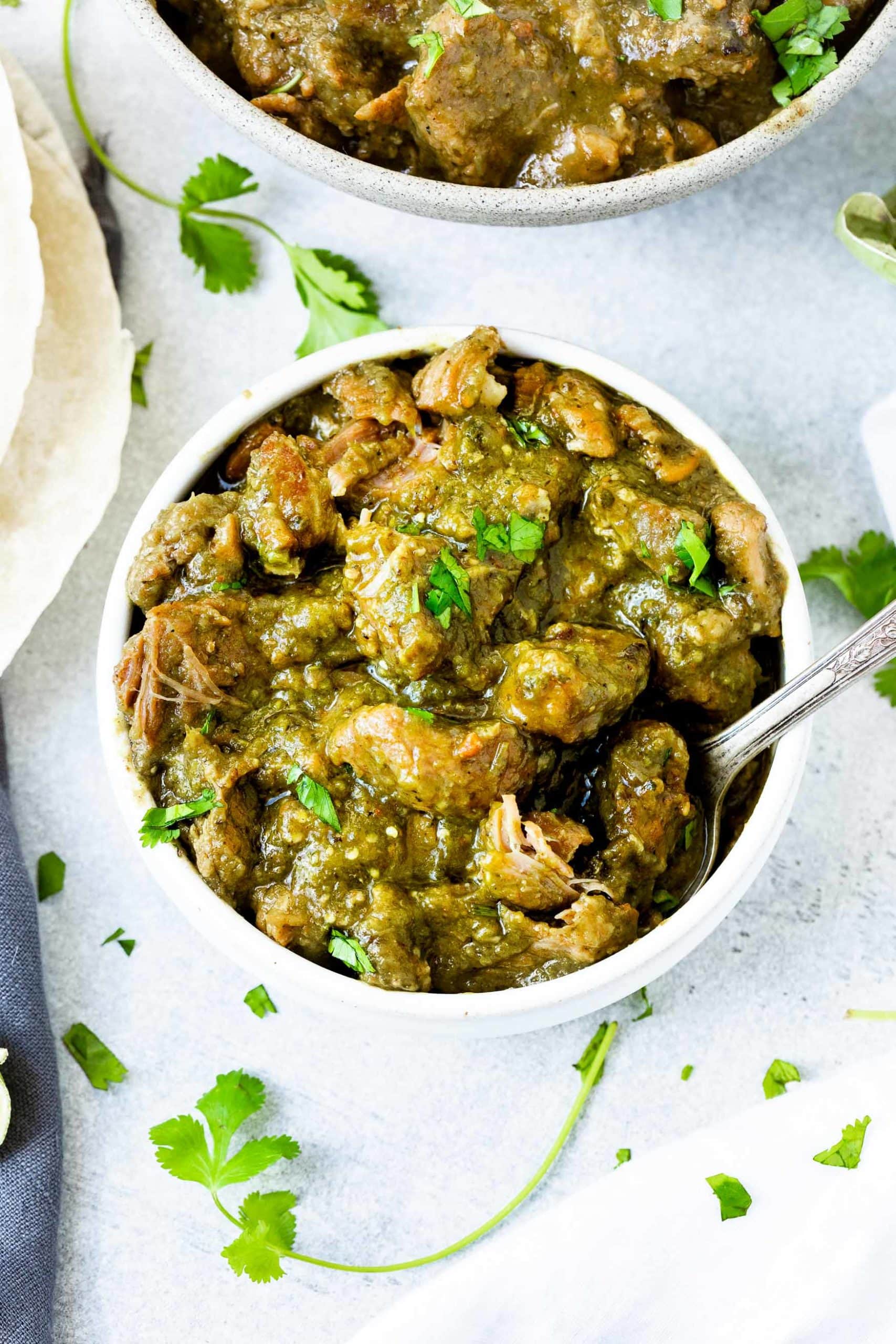 Traditional chile verde is a Mexican dish that is like a stew with large chunks of tender pork in a sauce. The sauce is made of roasted tomatillos and chiles. It is all about the low and slow cooking for this dish so that pork gets super tender and soaks in all the flavors of the roasted vegetables.

This ingredients list is going to look long at first glance, but there are a lot of dried spices and herbs that you probably already have in the cupboard, and most of the rest you can grab in the produce section. Here is the full list:

The measurements for each ingredient can be found in the recipe card at the end of the post.

How to Make Green Chile Pork

This recipe is going to take some time to prep but you can always ask your butcher to break down the meat into 2″ pieces. That’s what I do if I remember. Here is how it should look as you break it down: 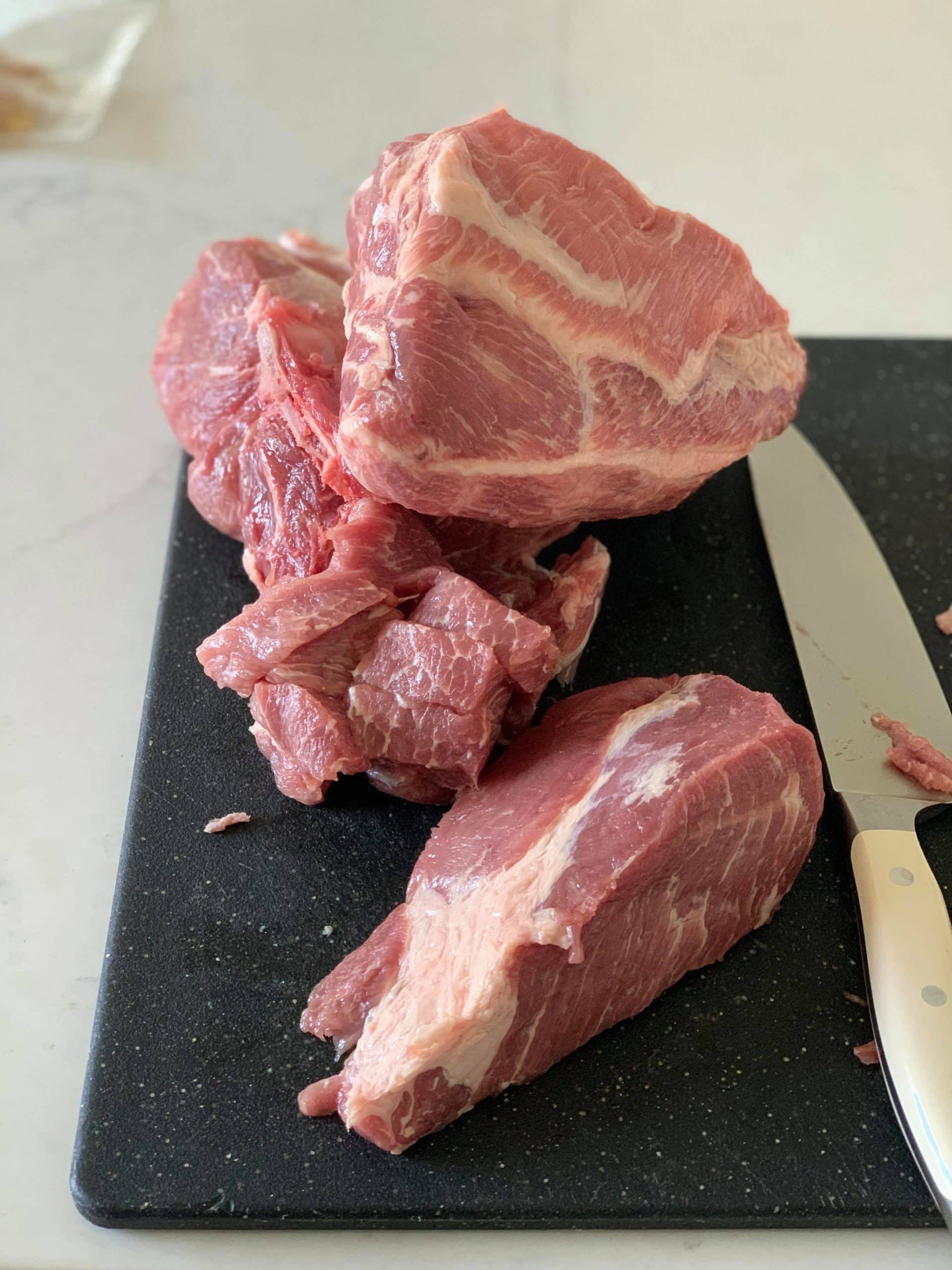 Here are the steps for making the chile verde:

All of these instructions can also be found in the recipe card at the end of the post. 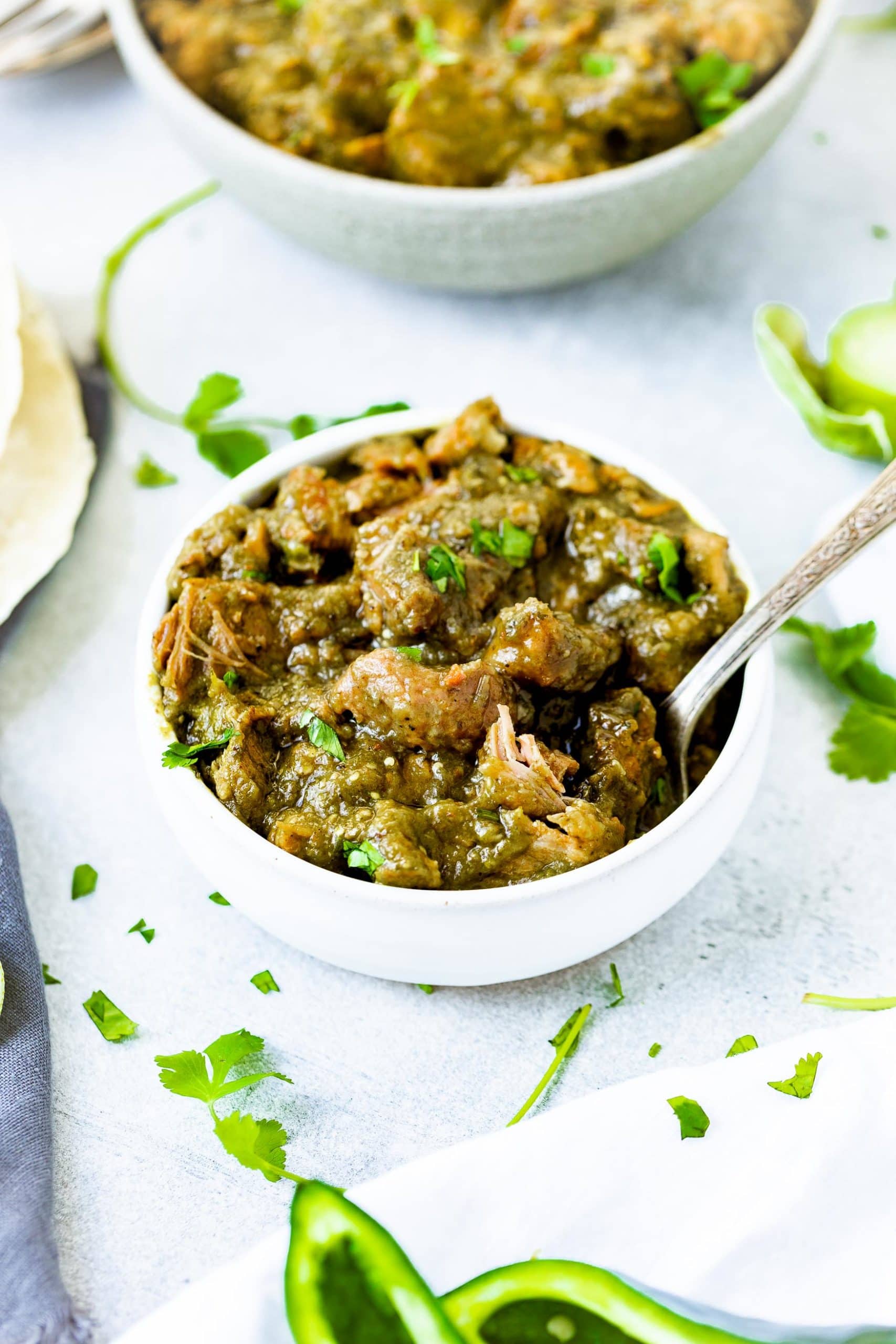 In case you missed it above, I love to make the verde and freeze it. I double the batch, place half in a food saver bag and vacuum seal it. I cannot live without my food saver. It makes life so much easier!

Roast peppers to get the ultimate flavor. The skins should be black, you didn’t mess up! Let them rest until touchable and then peel off as much of the skin as you’d like to. That charring is ESSENTIAL for flavor!

How to Get the Most Flavor

How to Serve Chile Verde

We love this served over rice. If you really want to indulge, dip some homemade tortillas in the chile verde. Yummm!

What to Eat with Chile Verde?

This recipe is so hearty, it could stand on it’s own for the complete meal, but if you are serving a crowd and want a few side dishes to go with it, here are a few ideas:

And if you need a dessert idea…tres leches cake of course!

Are Poblano Peppers the Same as Anaheim or Pasilla Peppers?

If you’re grocery store is like mine, the poblano peppers might be called pasilla peppers. Anaheim peppers are not the same thing, they pack a tiny bit more heat but are absolutely acceptable as a substitute for poblano peppers.

I for sure prefer this recipe with half and half Anaheim and poblano and the jalapeño half seeded. And you know I don’t like spicy! But just a little kick is so yum. 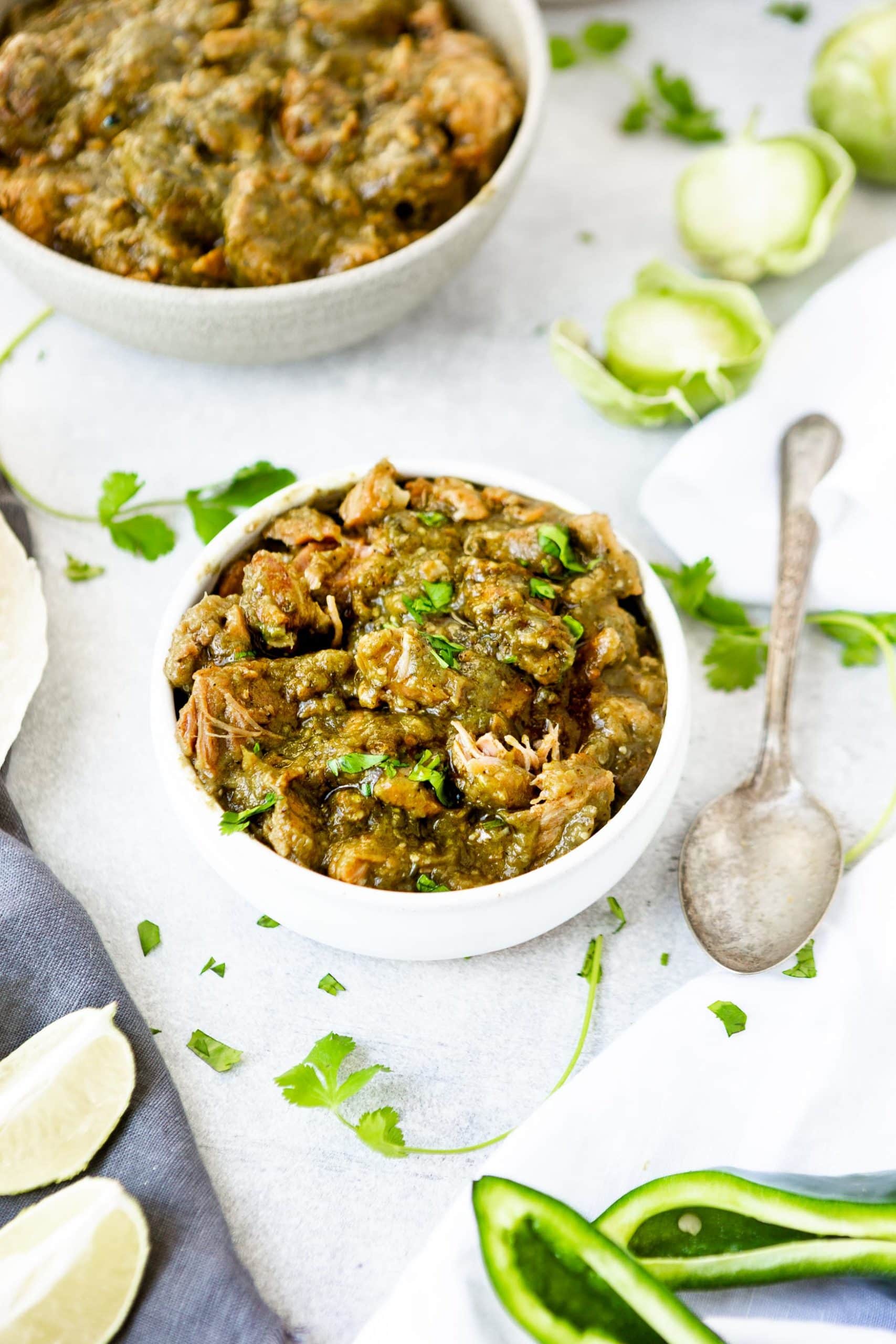 Can You Freeze Pork Chile Verde?

Yes, this recipe freezes great! I have two frozen bags of it in the freezer as we speak. I just pull it out of the freezer the morning we are going to eat it and then warm it up on the stove top at dinner time.

How Long Does Chile Verde Keep?

It will keep in the fridge in an airtight contain, it will keep for up to 5 days. If you freeze it, it will be great for up to 3 months.

It’s the most tender pork all in a homemade chile verde sauce. You’re going to love it and everyone is going to want the recipe when you make it! 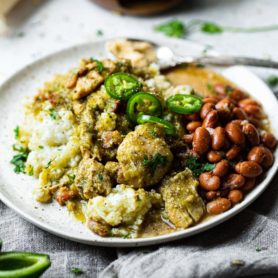