These are the best lemon dill cucumber sandwiches I’ve ever had! Try this awesome tea sandwich recipe at your next party with eureka!® Organic Bread! 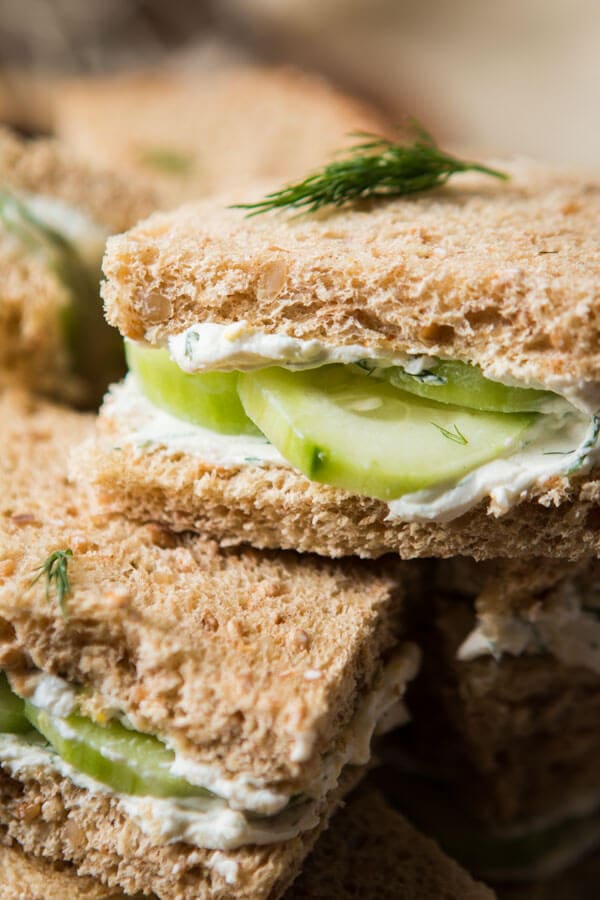 My mom often worked with a group of young women when I was growing up and on one occasion they held a silly Mother’s Day garden party, complete with garden hats in our backyard. I wanted to go so bad, but I was little and this was something I’d have to wait a few years to attend.

It looked like so much fun to a little girl, and I was beyond thrilled when there were some fresh flowers left over that she let me play with. That’s also the first time I’d ever seen a cucumber finger sandwich and I didn’t know what to make of it. Little white bread squares with a slice of cucumber and plain cream cheese. 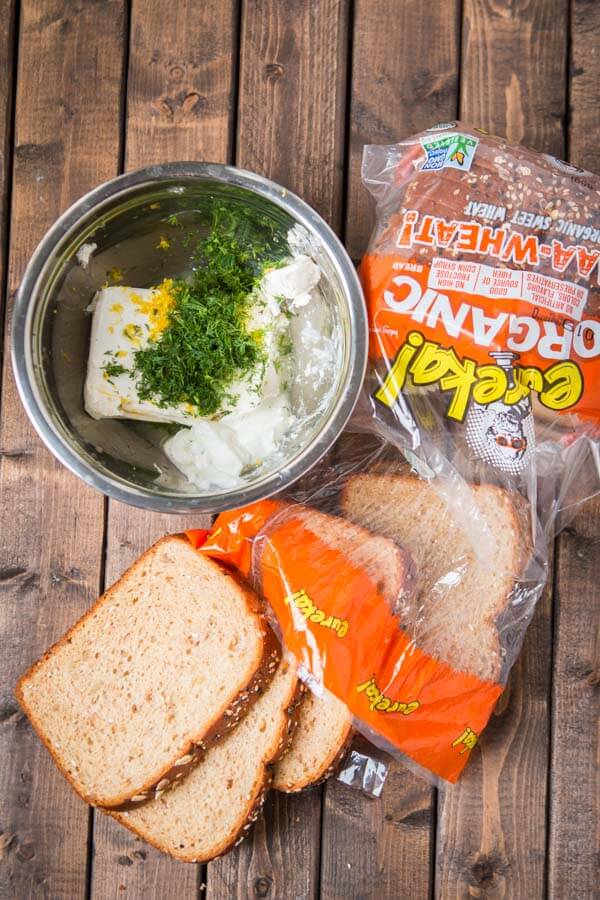 With spring in the air, I just had to recreate the classic tea sandwich but with our own twist. Cade was in charge of the bread and I don’t know why, but I was a little nervous he wouldn’t choose a good one, haha I need to be more trusting. He came home with Saaa-Wheat! eureka! Organic Bread because according to him, it’s bursting with rich flavor and tasty goodness and no artificial flavors, colors or preservatives. I’m pretty sold on that!

Bread was totally boring and not super good for you when I was little, but I’m loving how many varieties are out there now. If you’re sitting there thinking that you’re a die-hard fan of the processed white stuff, just trust us this one time, it’s ten times more flavorful of a sandwich when you choose a good bread, like eureka!

We lightened up these cucumber cream cheese sandwiches with a little Greek yogurt, which makes the spread more nutritious and fluffier. We also added some lemon and dill to brighten the flavors and keep them fresh to match those cool, crisp cucumbers, and of course added some lemon juice as the acid really cuts down on the bland cream cheese. 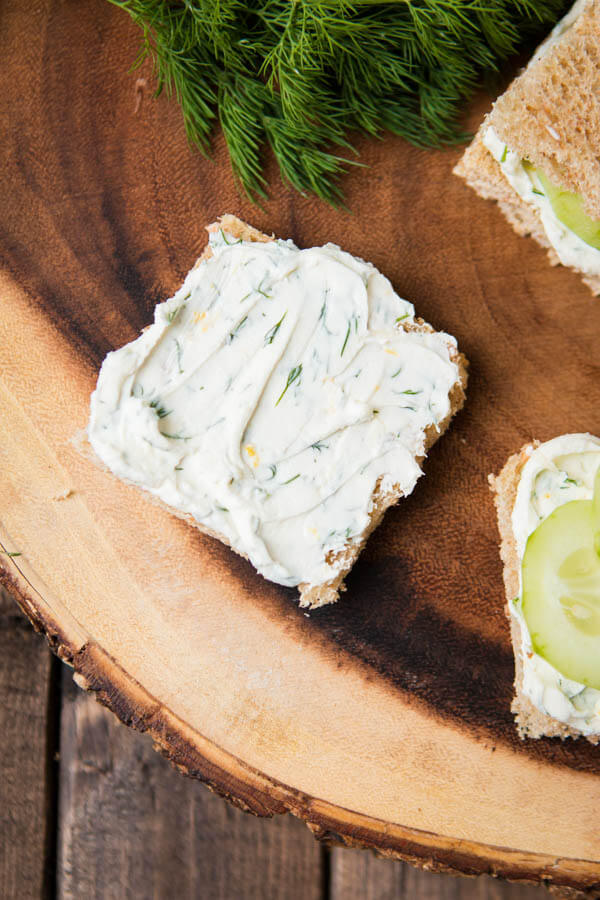 These cucumber dill sandwiches require just a handful of ingredients, many of which you may have on hand! Here’s what you’ll need to make cucumber finger sandwiches:

What’s the Difference Between Cream Cheese vs Neufchatel?

We use Neufchatel in these cucumber tea sandwiches because it’s a little healthier than regular cream cheese. So what’s the difference between cream cheese and neufchatel? American Cream Cheese and American Neufchatel are practically the same thing!

Or, at least they taste and work the same.

The biggest difference is that the neufchatel is made using only milk  (23% milkfat), while cream cheese is made with milk and cream (33% milk fat) so it’s a little more fattening that the first. 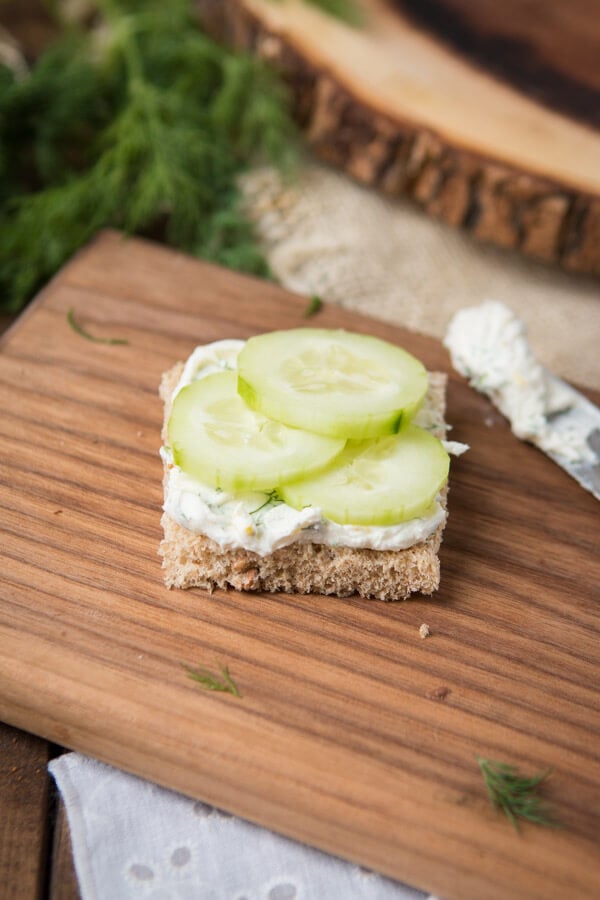 How to Make Cucumber Sandwiches

This cucumber cream cheese sandwich is a breeze to make. Tea sandwiches in general are so simple, but everyone goes crazy for them!

Can I Prep Cucumber Sandwiches in Advance?

You can pre-slice the cucumbers and whisk together the cream cheese spread up to 24 hours in advance. But I recommend waiting to assemble the cucumber finger sandwiches until you’re ready to serve them. 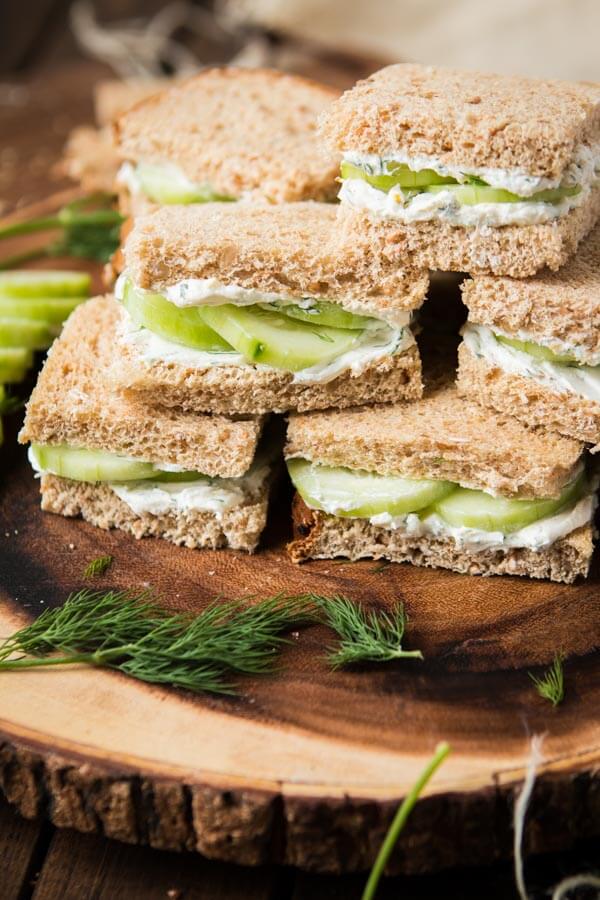 We prefer peeling the cucumber before slicing it, but you’re welcome to leave the skin on if desired.

Similarly, you’re welcome to use regular cream cheese instead of Neufchatel if that’s what you have on hand.

For a thicker, creamier spread, you’ll want to use full-fat cream cheese and full-fat Greek yogurt. You can probably use light versions of both if you want, but full-fat is our favorite. 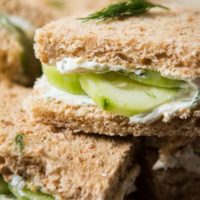 3.76 from 50 votes
Prep Time: 10 minutes
Total Time: 10 minutes
Servings: 15 -20
Save Recipe Print Recipe
These are the best lemon dill cucumber sandwiches I've ever had! Try this awesome tea sandwich recipe at your next party with eureka!® Organic Bread!

This is a sponsored conversation written by me on behalf of eureka! Organic Bread. The opinions and text are all mine.