Snacks for Halloween that Aren’t a Hassle 🎃

We love these Loaded Twice Baked Potatoes. Crispy skinned russet potatoes are sliced in half, their filling mashed into creamy mashed potatoes and loaded back in with shredded cheese and bacon on top which gets all melty in the oven. 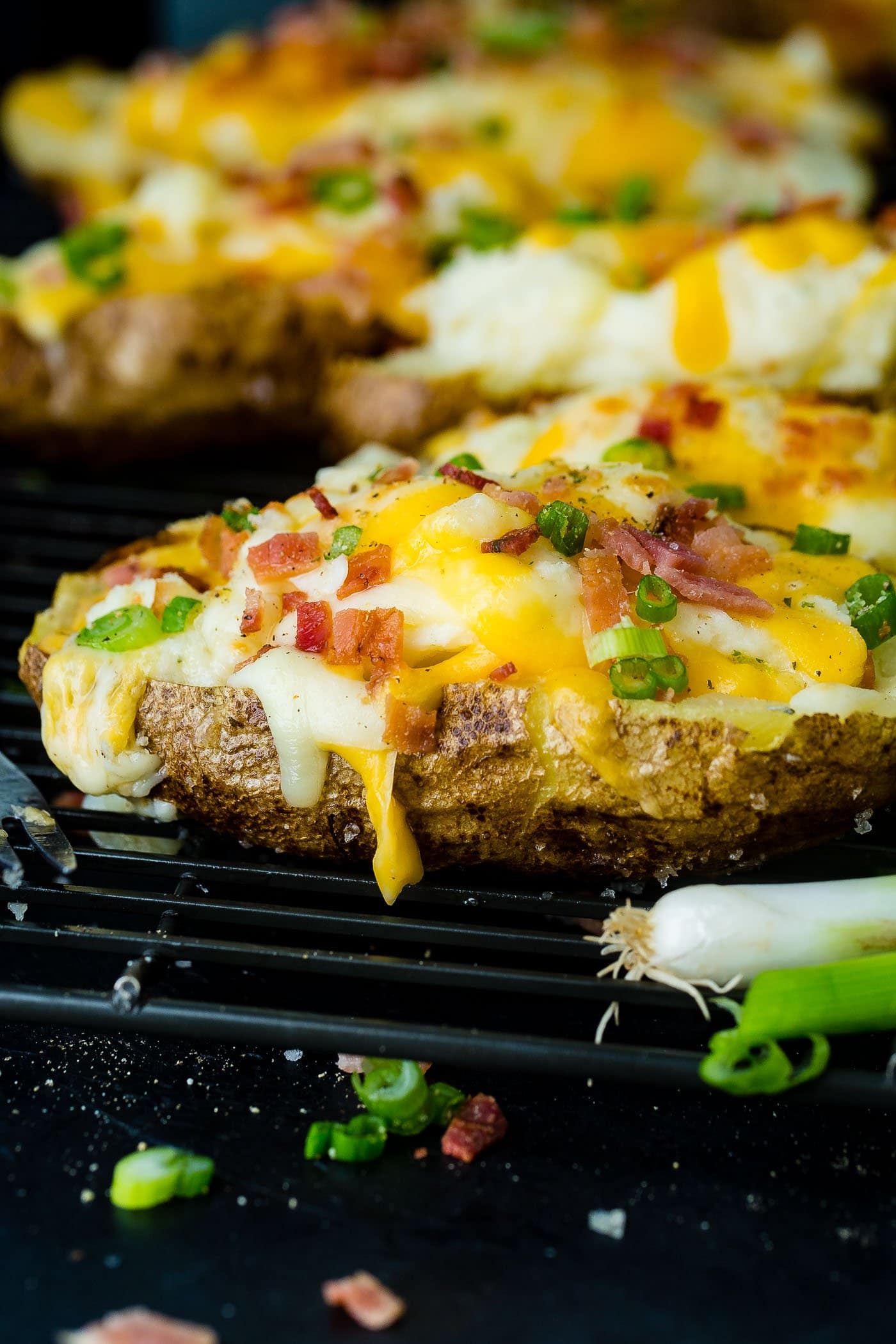 When I was little I got babysat by a family we had known for year and years.

I can perfectly remember standing in their bathroom after getting hurt but I can’t remember how I got hurt. Either way, I walked out, choking back tears and the mom was putting twice baked potatoes on the table.

I was a little nervous about them because I was every mom’s worst nightmare, a horribly picky eater.

One tentative bite in and I was hooked. You can make them with or without cheese and bacon, it’s delicious with those crispy skins and fluffy insides!

How Make Twice Baked Potatoes in the Oven

These taters are totally a killer side. They are both delicious AND easy to prep a day ahead or use leftovers for. 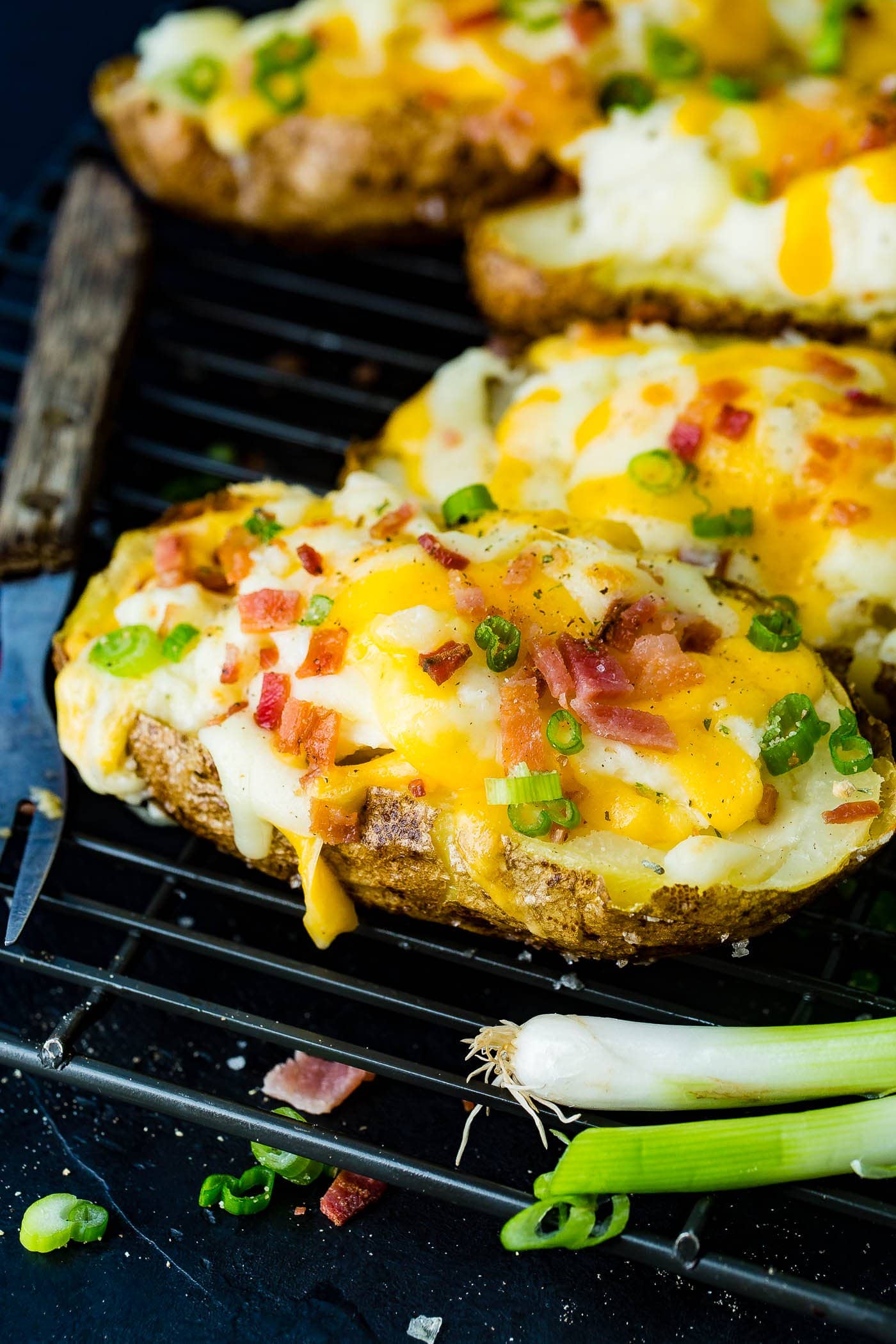 Can Twice Baked Potatoes be Made Ahead of Time?

Twice baked potatoes look like a ton of work since you’re technically making two recipes, but it actually is a genius make ahead side dish.

Here’s how you can make twice baked potatoes a day ahead:

That’s right, not only CAN you make these a day ahead, but honestly they are easier to prep a day ahead as the potato is easier to scoop out.

How to Keep Twice Baked Potatoes from Breaking

Why do your twice baked potato skins fall apart?

You scooped out too much of the potato! There’s nothing to hold the paper thin skins.

Leaving 1/4″ of the flesh will help to hold the potato shape. 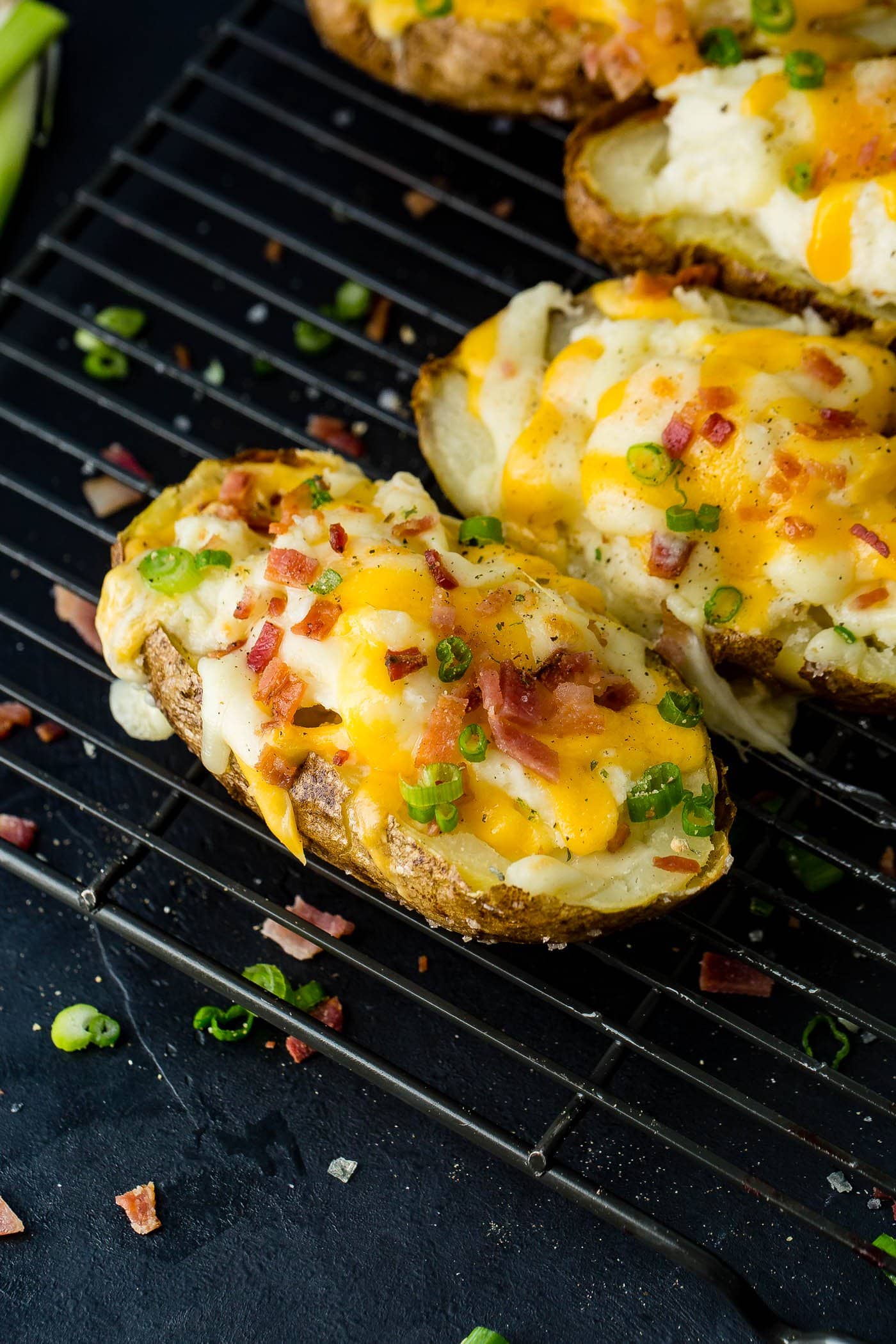 Are Potatoes a Vegetable?

Potatoes are classified as vegetables, but we kind of tend to forget about them.

However, it is nutritionally considered as a starchy food due to its high carbohydrate content.

So, I guess potatoes are actually starchy vegetables.

What Potato is Best For Twice Baked Potatoes?

Starchy potatoes such as russets are the best potatoes to bake.

Do not try to make twice baked potatoes with yukon golds as the skin and flesh won’t work. 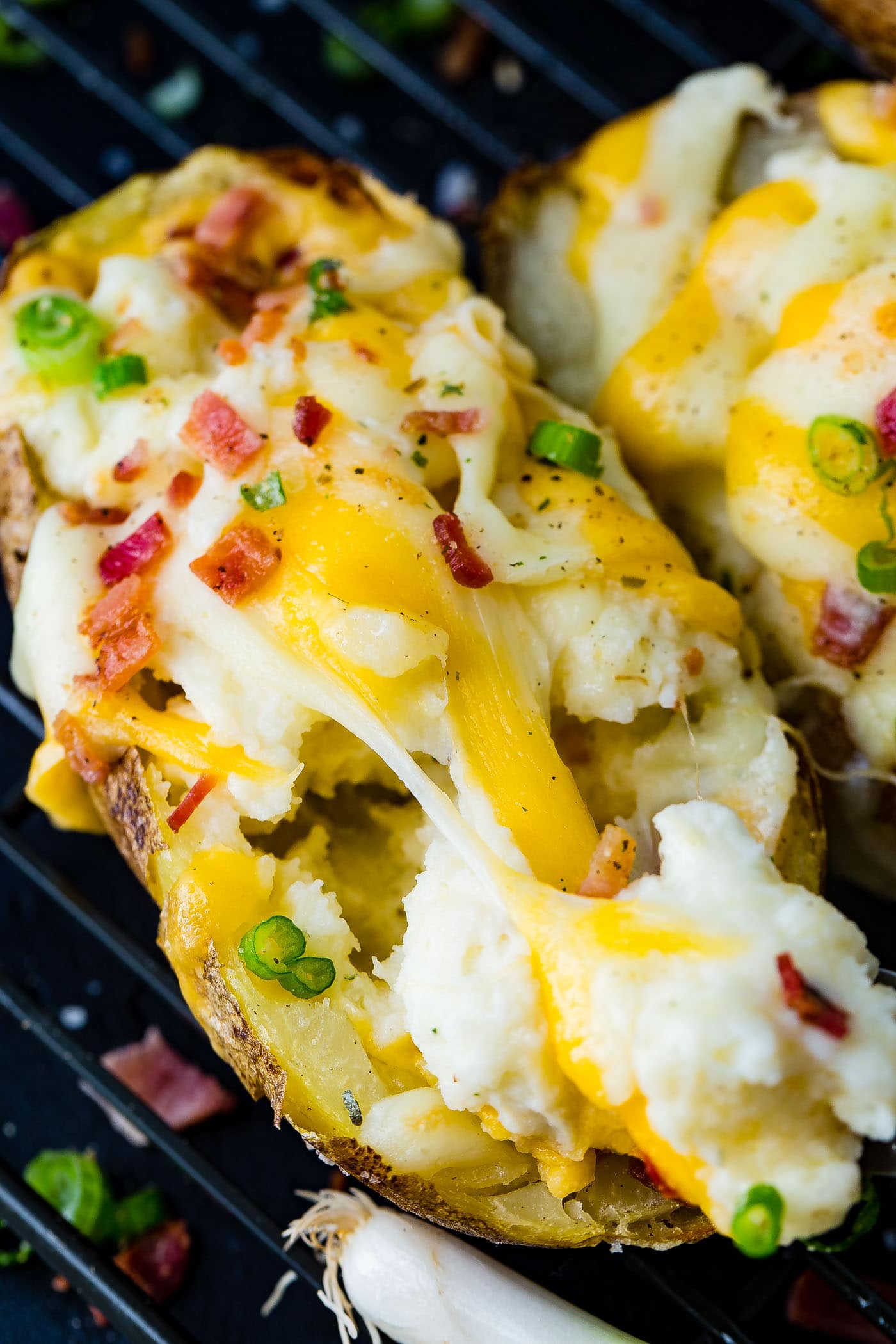 What Temperature for Twice Baked Potatoes

We like to bake our potatoes at 350 to get that crispy skin with a perfectly cooked inside, however when you do the second bake pop the taters back in at 400.

Are Potato Skins Good For You?

Potato skins are good AND good for you.

The potato skin not only adds fiber and nutrients, but it also helps the flesh of the potato retain its nutrients.

What to Serve Twice Baked Potatoes With

Lots of things go with twice baked potatoes, but here are a few favorites.

Can You Freeze Twice Baked Potatoes

Place the potatoes in a freezer bag and seal.

When you reheat the potatoes that’s when you should add the cheese and bacon.

How Long Can Twice Baked Potatoes be Refrigerated

Twice baked potatoes can be refrigerated in a sealed container for 3-4 days. 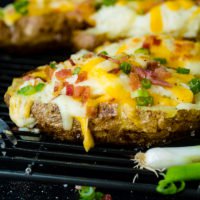 4.17 from 6 votes
Prep Time: 10 minutes
Cook Time: 55 minutes
Total Time: 1 hour 5 minutes
Servings: 6
Save Recipe Print Recipe
Crispy skinned russet potatoes are sliced in half, their filling mashed into creamy mashed potatoes and loaded back in with shredded cheese and bacon on top which gets all melty in the oven.

Snacks for Halloween that Aren’t a Hassle 🎃