It’s much easier than you thought to make Perfect Baked Potatoes with crispy skin and that delicious flaked sea salt. So ditch the foil, it’s your number 1 mistake! 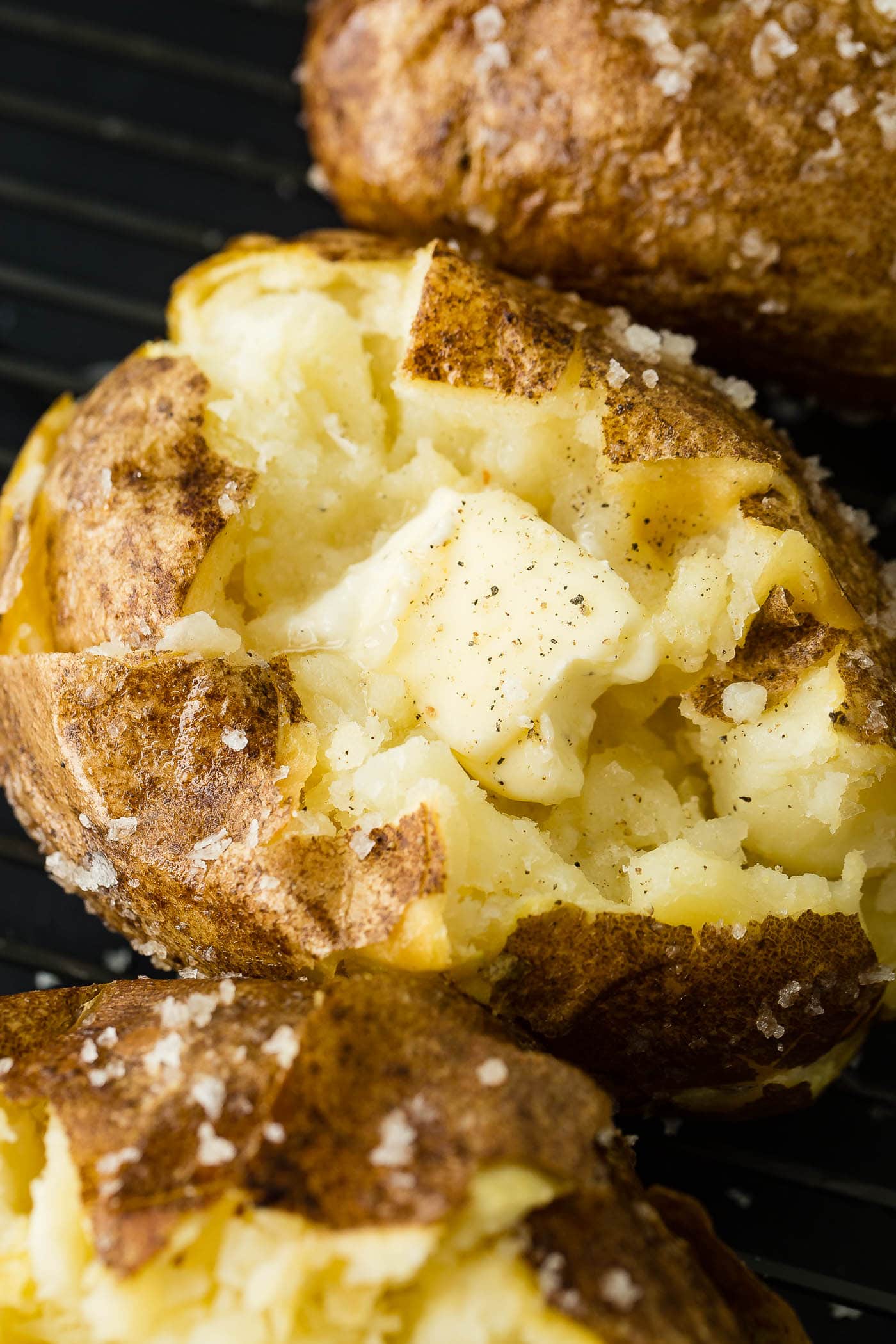 I ate my baked potatoes with ketchup growing up.  I know. You think I’m crazy. Ok, I lied, I still do it. 🙂

You guys!!! It’s like a french fry if you think about it so it’s not THAT weird, ok. Might as well put it out there that my dad eats peanut butter pickle sandwiches too. NOW THAT IS GROSS!

I’m older, and while it might look like I’m not any wiser I actually have learned a few things and the first being how to make perfect baked potatoes.

It’s time for Idaho spud harvest so I couldn’t help but talk about potatoes here. I miss spud harvest. I went to college in Idaho and my parents now live there.

The Idaho Potato Commission even took me on a tour of harvest one year. It was my favorite.

Now, I don’t know if anything has changed, but it used to be that the kids got out of school so that they could help with harvest. It was amazing watching everyone have a job from little toddlers to college students. Families and friends, farmers and their help all worked around the clock to put potatoes on your table.

I can still remember the glow of tractor lights when I was walking home from a late library session one night. We actually just bought an investment property in Rexburg, so it seems my heart will always be pulled back there. 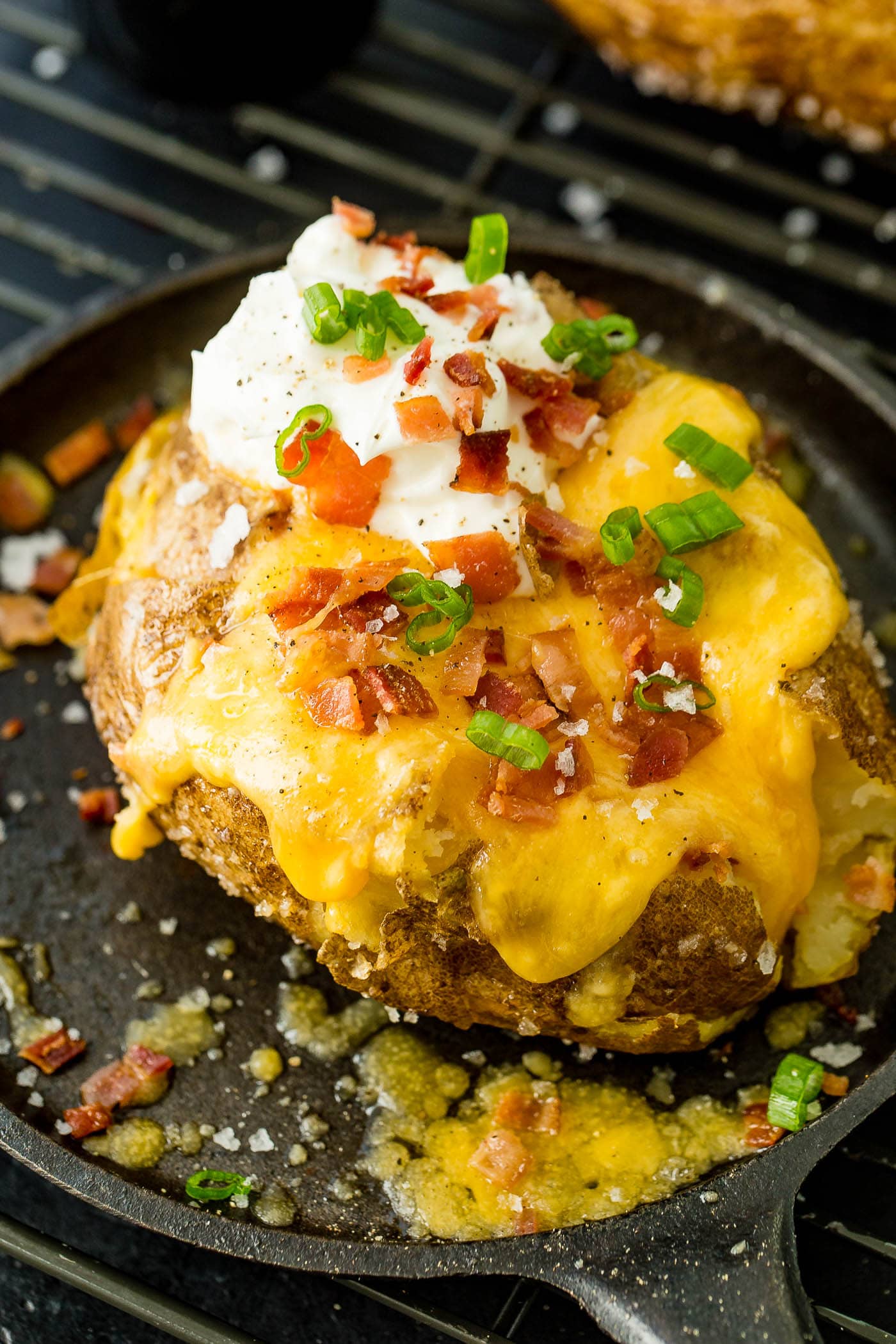 What Do You Need to Make Perfect Baked Potatoes?

You don’t need much to make the best baked potato. Here’s all you need to make this “recipe:”

What Kind of Potatoes for Baked Potatoes?

You should always choose a well rounded russet potato for baked potatoes. The fatter, rounder potato will give you more filling and that beautiful fluffy potato when you squeeze it open.

Russet potatoes have a better starch to them, which leads to a fluffier inside once baked. 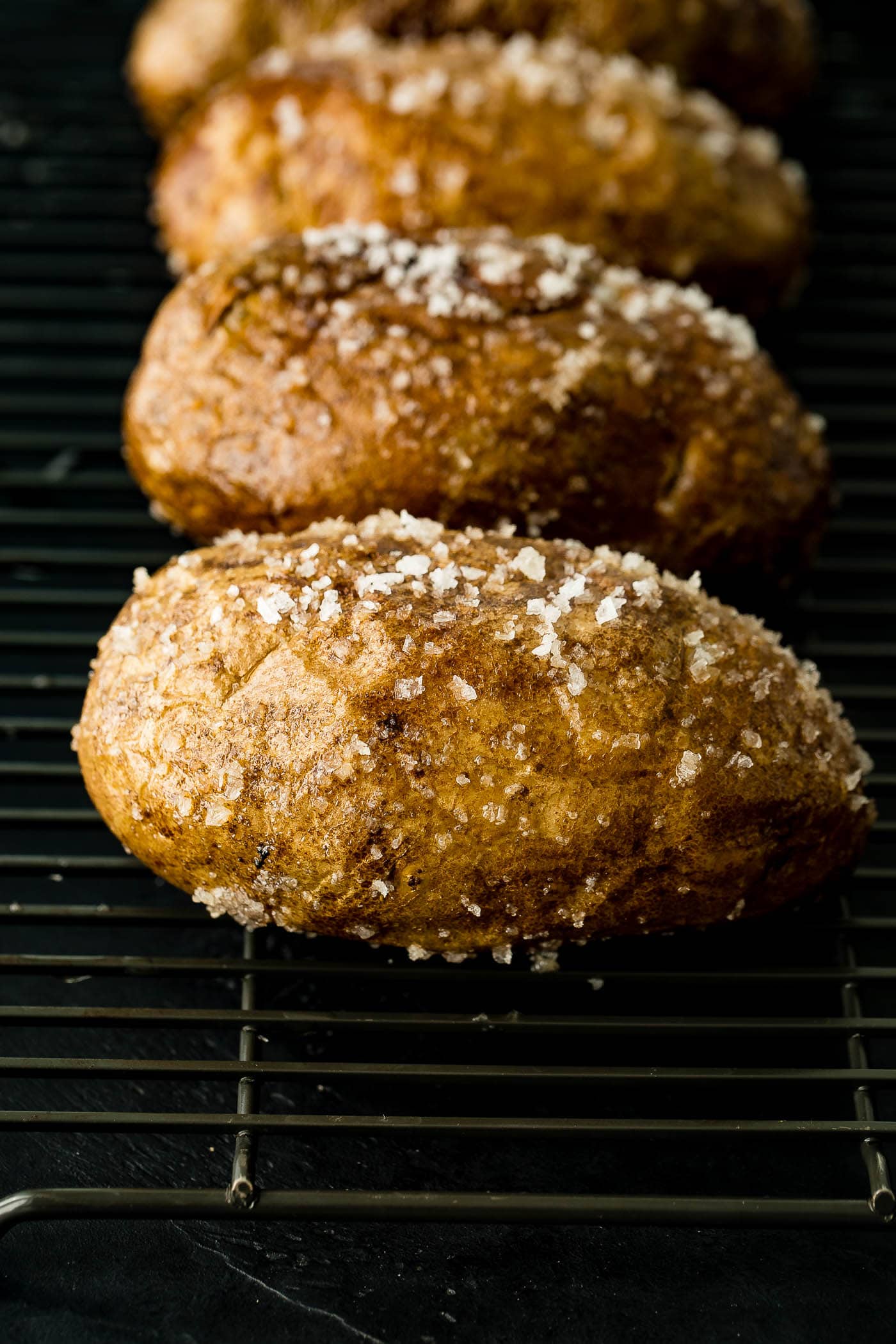 How to Bake a Potato with Crispy Skin

Making a baked russet potato shouldn’t be so tricky, but if you’ve ever under cooked them, poked a million holes, over cooked it so they skin is like leather, or ended up with a bland potato, you need to read on.

What Temperature to Bake Potatoes?

Bake potatoes at 350 degrees Fahrenheit. The oven should never be 400 degrees F or over for baked potatoes. The skin will cook faster than the insides leaving you with leather.

How Long to Bake a Potato?

Bake a potato at 350 degrees F for 1 hour or up to 75 minutes if they are very large potatoes. Remove from the oven to cool for a minute or two before opening as the steam on the inside will get ya.

If you need to bake faster you can do:

However, we really recommend 350 degrees F as the perfect temperature. 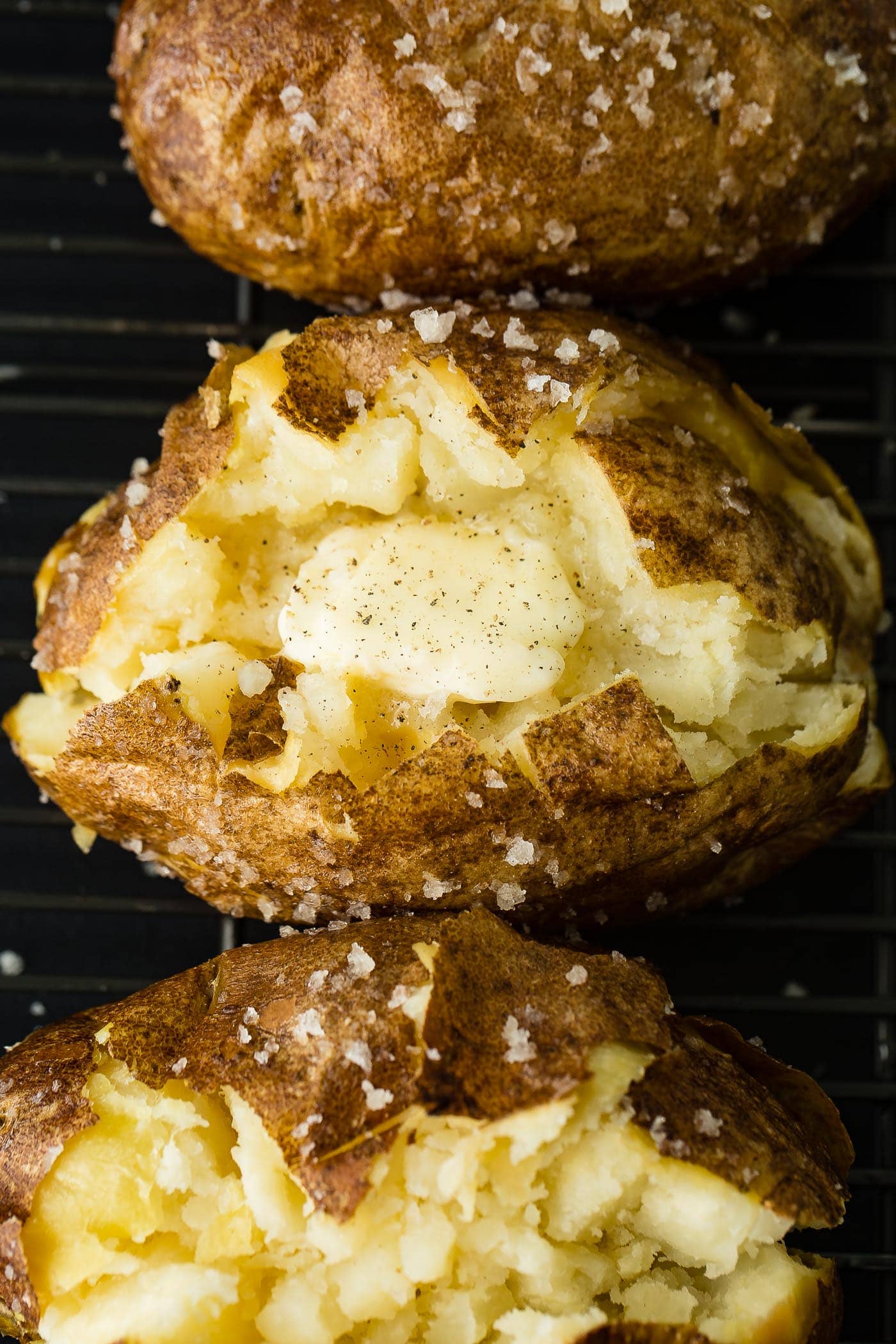 Should I Wrap Baked Potatoes in Foil?

While in college, there was a common place for boys to take their dates to, Texas Roadhouse. I was introduced to the world’s best rolls. (Besides our Potato Rolls of course.) Oh look, potatoes are creeping in everywhere.

Texas Roadhouse totally blew my mind with baked potatoes as a college student. I had grown up eating a lot of baked potatoes as my parents grew up in Idaho and Oregon, but we just wrapped them in foil and baked them.

I love you, Mom. Just in case you read this. 🙂 I’d eat your foil wrapped potato any ol’ day just to sit at your counter with my feet dangling from the stool again.

Wrapping a potato in foil not only gives it a tiny hint of a metallic flavor, but it steams the potato instead of baking it. We want BAKED potatoes, not steamed.

That means that the heat needs to hit the potato straight on its skin. Ahhh but it doesn’t stop there, we need flavor and texture too.

Olive or Vegetable oil help to crisp up and roast the potato skin, and who doesn’t love roasted potatoes?

Flaked, not table or kosher salt, but Flaked Sea Salt adds flavor to a root vegetable that can often be bland and lifeless. It also adds another layer of texture and fun to the potato!

I see posts all over the internet where they rub the potatoes with salt, which is great, but trust me on this, FLAKED SEA SALT, our favorite Flaked Sea Salt by Maldon. Or if you must, Kosher will do. 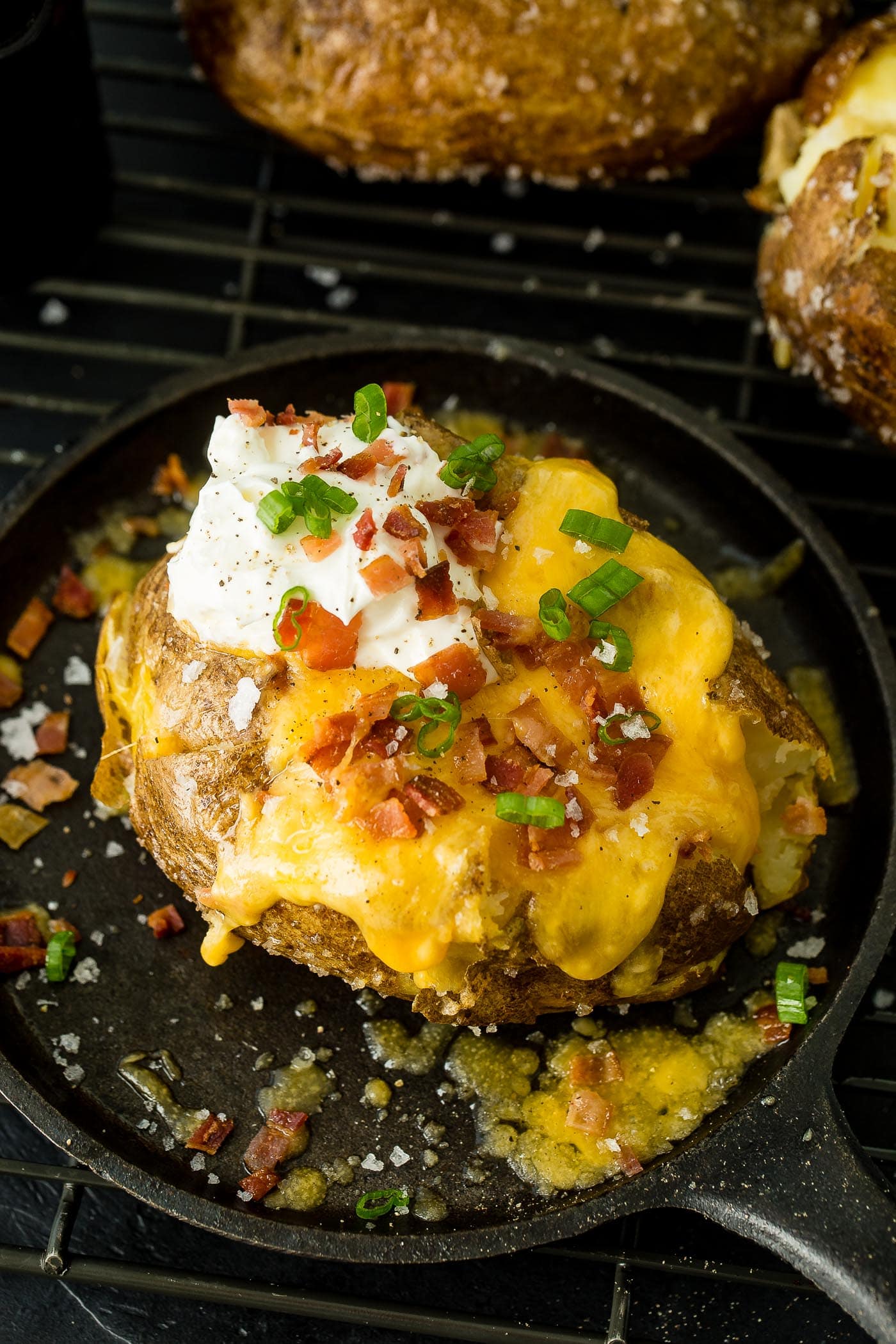 Once you have made a delicious baked potato in the oven, you can take things over the top by making it a LOADED baked potato. HECK. YES.

How to Cook Potatoes in the Microwave

While we don’t recommend cooking your potatoes in the microwave just for a baked potato side dish, we know that life can get crazy and you can’t wait an hour.

How to Open a Baked Potato

Did you know there’s a better way to open your baked potato than just sliding a knife from one end to the other? Look at the picture for a clue.

How to Reheat a Baked Potato

You put in the effort to read up on how to cook a baked potato in the oven so that the skin crisps up nicely, so don’t ruin your work by reheating leftover baked potatoes in the microwave!

Instead, reheat baked potatoes in the oven at 350 degrees F for 15-20 minutes. 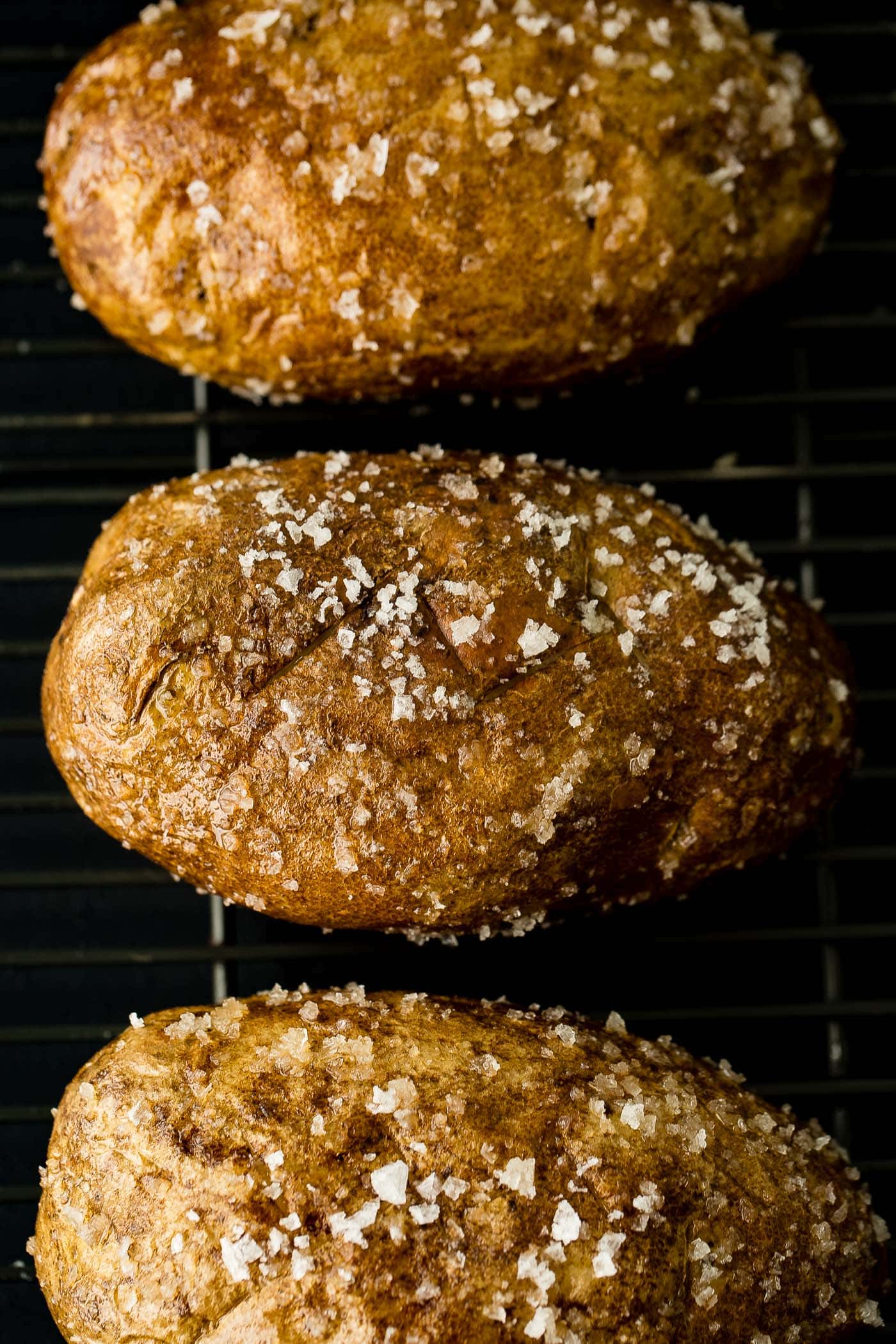 What to Serve with Baked Potatoes

These really are the BEST baked potatoes ever! They can be loaded with toppings and enjoyed as a main dish, or you can serve them as a side to any of these family favorites:

Everything You Need for the Perfect Steak Dinner

The main dishes listed above are blasted delicious with these potatoes, but if you ask me, the perfect steak dinner must include an oven baked potato and a wedge salad with blue cheese dressing. That’s it…that’s a steak dinner at its finest in my book! 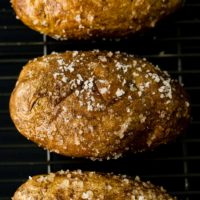 How to Make Oven Baked Potatoes