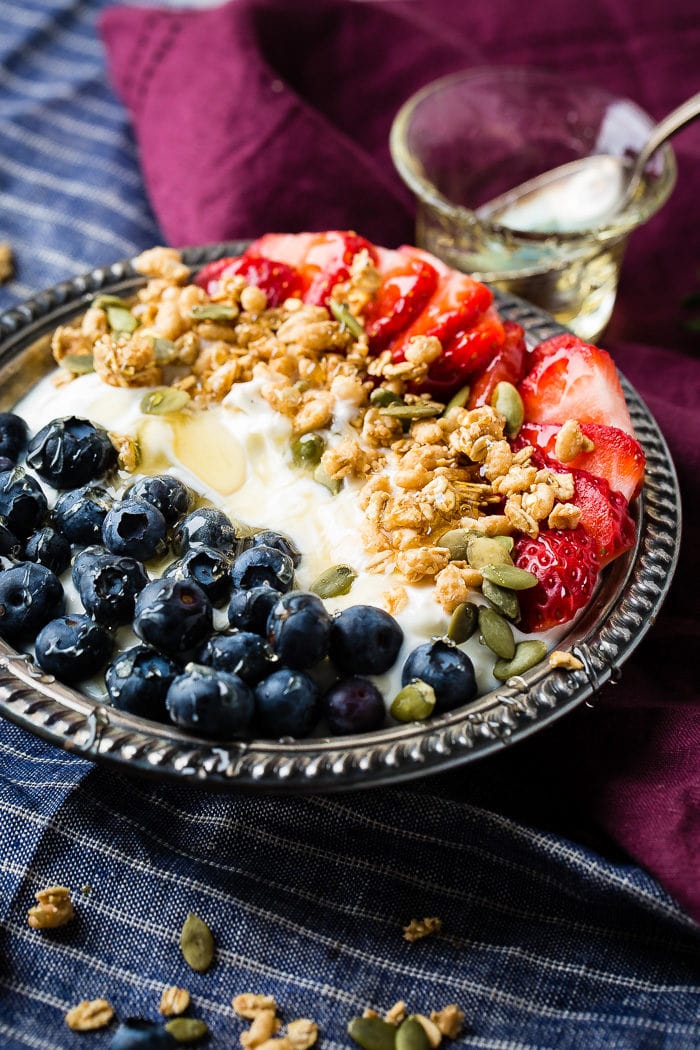 As you probably know by now, I love eating yogurt for breakfast. I especially love when it’s thick and creamy Greek yogurt. Things got kind of crazy when my friend and owner of La Barba here in Utah told me that she’s started making yogurt in her Instant Pot for their shop. Um, yes. I tried it, it was amazing, and I’ll never go back to store-bought yogurt! She also blogs at Vintage Mixer and is living in Europe for a few months — so seriously, she’s kind of one cool kid, with kids. 😉

Alright, let’s get down to the nitty gritty. In college I was trying to still eat like normal, but on a ridiculously tiny budget. When yogurt would go on sale I’d buy a few and considered it my splurge on groceries. I know, it’s the little things, guys. Anyway, I couldn’t afford granola so I’d wait for granola bars to go on sale as well and break some up over my yogurt for breakfast.

It’s really hard to be in college and try to balance so many things, but I LOVED it. I loved being on my own, I felt totally capable of sticking with a budget and the feeling of accomplishment from excelling in my classes, but I hated trying to figure out how to cook for just one person. I soooo wish I would have had an Instant Pot back then.

In fact, that should totally be the new graduation and wedding gift of choice. Think about it, one little appliance that can do everything. Even the kids who go into a dorm room could make themselves a real roast with their roomies every now and again and not need a stove at all! 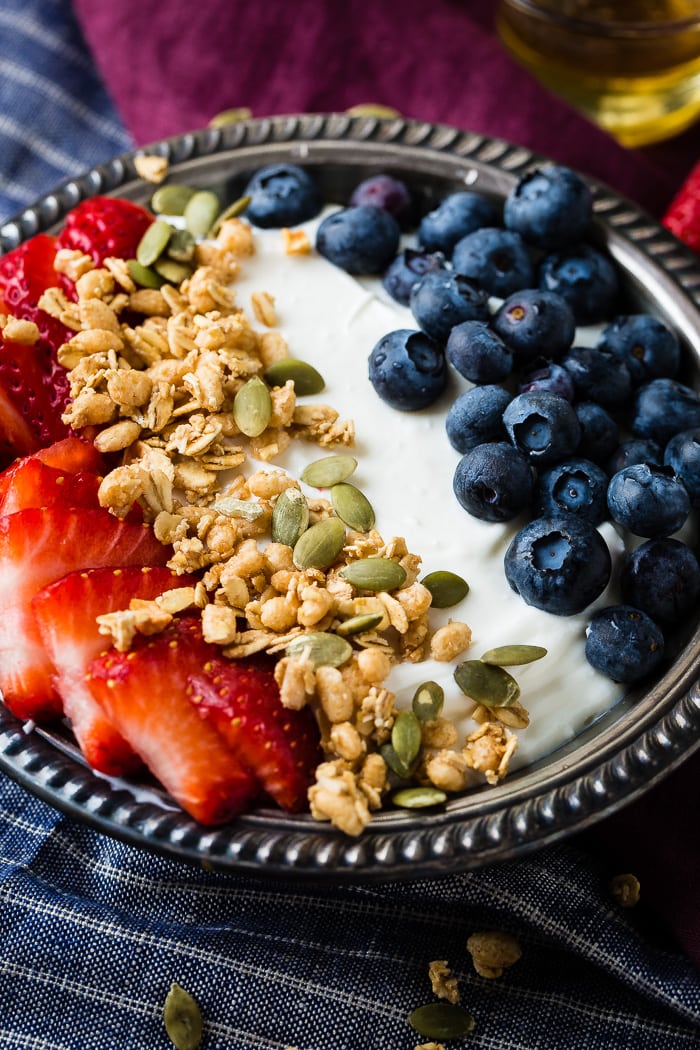 To make regular Instant Pot yogurt or Greek yogurt, you only need two things: milk and a starter. We also add in a splash of vanilla extract for extra flavor and sweetness.

Your Instant Pot (or slow cooker) will take care of the heating and the fermenting, especially if you bought this Instant Pot 6 qt 9 function (our personal choice) with the yogurt button, which makes everything extra easy.

Homemade yogurt is best when made with 2% or whole milk. We don’t buy either on a regular basis, so we go with whichever is on sale that week.

Which Yogurt Starter is Best for Homemade Yogurt?

Store-bought plain Greek yogurt is the easiest yogurt starter. The most important thing is that the yogurt must have ACTIVE cultures, so check out the ingredient list to make sure it includes Lactobacillus bulgaricus and Streptococcus thermophilus. In fact, many yogurts now say “contains active cultures” without you even remembering those names. Once you have made homemade yogurt once, that batch of yogurt can be used as the next starter. Winning!

Tip: If you think making this homemade yogurt recipe is easy, you will love our Instant Pot Cheat Sheet that makes cooking all the basics extra easy!

This Instant Pot yogurt recipe can be used to make either regular yogurt or Greek yogurt. Here are the necessary pieces of equipment you’ll need to have on hand to make homemade yogurt:

How to Make Yogurt in an Instant Pot

This Instant Pot yogurt recipe requires some advanced planning, but the actual hands-on prep work is incredibly simple. Here’s how to make yogurt in your Instant Pot:

How to Make Homemade Greek Yogurt

After following the steps listed above, you’ll be left with plain yogurt. To make Greek yogurt, place a large piece of cheesecloth over a strainer and pile in the yogurt. Wrap the cheesecloth over the yogurt and twist the top, squeezing out the liquid as you twist.

Set the cheesecloth in the strainer and put the whole thing in the fridge overnight to drain out the liquid. In the morning, store the yogurt in a plastic container with a lid. 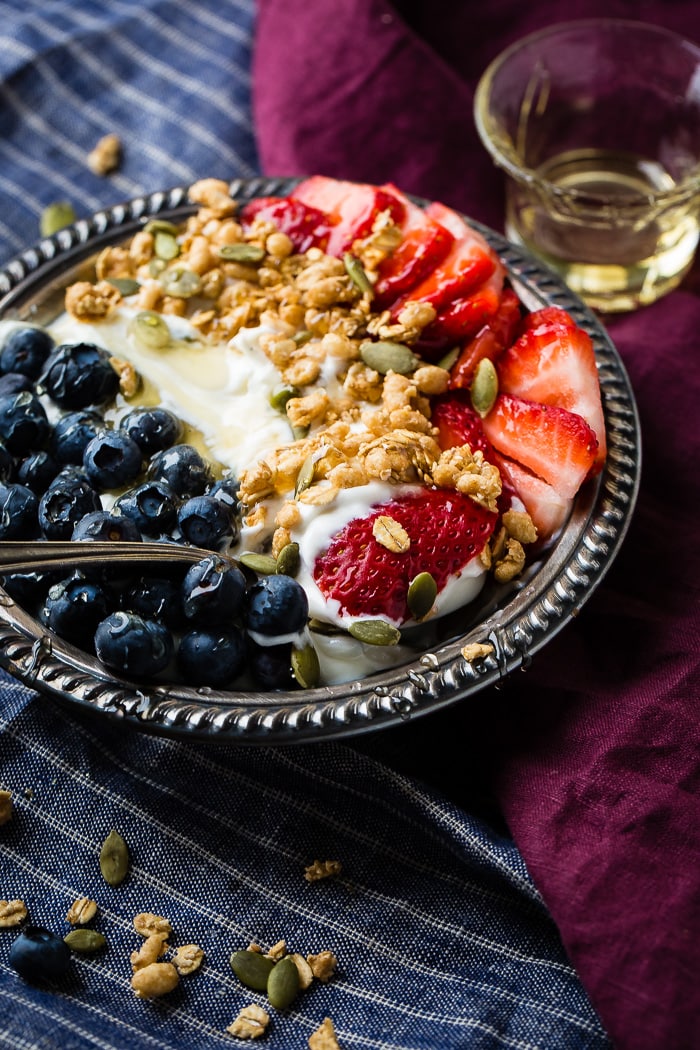 How Long Does Yogurt Last?

Homemade yogurt will last for about 2 weeks in the fridge (if you can get everyone to stay out of it, that is). We recommend you eat it within a week so that you can use a little starter to begin a new batch, and to keep the one you’re eating nice and fresh.

Can Homemade Yogurt be Frozen?

You technically can freeze yogurt, but we advise against it. Frozen homemade yogurt, or even store-bought can take on a harsh, acid-like flavor. Its texture also becomes runny and grainy. It’s still healthy to eat frozen yogurt, but it won’t be very pleasant.

Why Didn’t My Homemade Yogurt Set?

Your homemade yogurt probably wasn’t kept warm enough during incubation which is why an Instant Pot really is so important as it does that hard work for you. Don’t worry though, failed yogurt can be salvaged by re-heating it carefully over low heat back to 110ºF and incubating it for the second time.

Culturing your homemade yogurt for too long, at too high a temperature, or with a starter culture lacking active cultures can also cause yogurt to separate or turn lumpy. If your yogurt turns lumpy, strain it to remove the whey, then beat the yogurt solids in a bowl until it turns smooth.

You don’t have to sweeten homemade Instant Pot yogurt at all. It gets tangier the longer you let it ferment, so just don’t take it past the 6-8 hours and it won’t need as much sweetening. But if you do want to sweeten it you should use a natural sweetener like honey and or vanilla, which won’t add as much sugar and fat and it will blend in easier. Sweeten homemade yogurt after you have heated it the first time and are about to let it ferment.

Please note that we’ve only made regular yogurt in our Instant Pot and have never tried making dairy-free yogurt.

We’ve also only made plain Instant Pot yogurt, so we can’t advise you on how to make flavored yogurts, such as strawberry or blueberry. 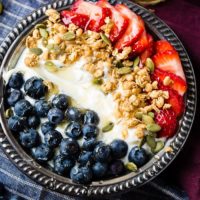