Love cheesecake but aren’t comfortable making it at home? Try this EASY no-bake banana pudding cheesecake and have it ready in half the time!

You can make a homemade no-bake cheesecake so many different ways, but this one in particular uses a simple pudding, fresh bananas, and whipped cream all piled on top of the cheesecake filling and a vanilla wafer crust.

I’m normally such a die hard for a graham cracker crust, but when I finally got my hands on Julianne’s No Bake Treats cookbook I just had to try her Nilla Wafer crust. It looked like perfection as do all of the desserts in her book. We have so many cookbooks we’ve become rather picky about what we keep on hand. A no bake dessert book was a must as far too often we are asked to bring a treat somewhere and I want a show stopper, but without all the fuss.

We’ve followed Julianne since the very beginning and were so excited to hear that she had a cookbook out. Every recipe in No Bake Treats has a big beautiful picture, easy to follow instructions and everything is something you’d normally make in real life, so not a page is wasted.

We’ve made this cheesecake three times now and this is where I have to admit our failure. Every cheesecake was a total show stopper. Absolutely beautiful with perfectly defined layers and the most beautiful topping. And then we made one to photograph. It was a dream and the pictures turned out amazing.

And then I deleted them. Usually I try to upload my photos on the same day I take pictures but this time we left for Italy and I didn’t have a chance. When we got back I was out of space on my card so I formatted it and the moment I did I knew I’d made a mistake.

But it only gets worse. Right then and there I whipped up another cheesecake. When I spread it over the cheesecake it looked fine, though I noticed something was a little off. By the time I opened the springform I knew, I hadn’t let the pudding thicken completely. UGH!!!

It still turned out which says so much about the recipe and how good it is. I debated and debated about making it again, and finally decided this, we have a great relationship with our readers, and we seem to all be in the same place, good people trying to raise good children and just do good things. Making another cheesecake would have required us to work instead of snuggling on the couch for a promised movie date, so please forgive us that the layers are not as clearly defined as they could be.

However, take this as a good sign, even when I failed the recipe still turned out. It’s fail-proof. Which is awesome. It tasted delicious and I didn’t feel bad about it at all anymore. In fact, we snapped a few pictures and ate the rest with a pile of forks and no plates at all. I’d say it was still a success. Definitely a cookbook to buy. 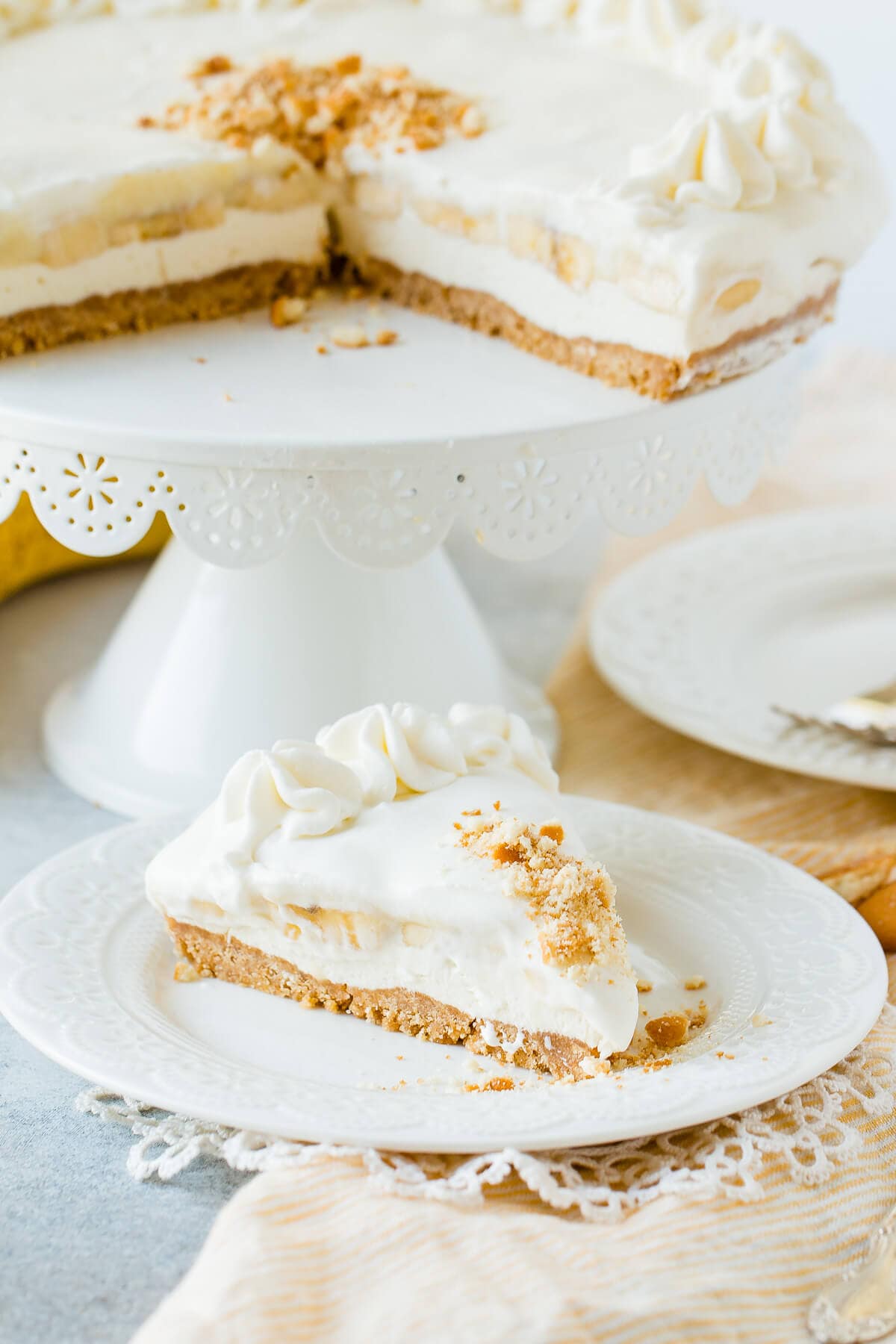 This no-bake banana pudding cheesecake has four layers: the Nilla Wafer crust, the vanilla pudding layer, the cheesecake layer, and the banana topping. Here’s what you’ll need to make this banana cheesecake: 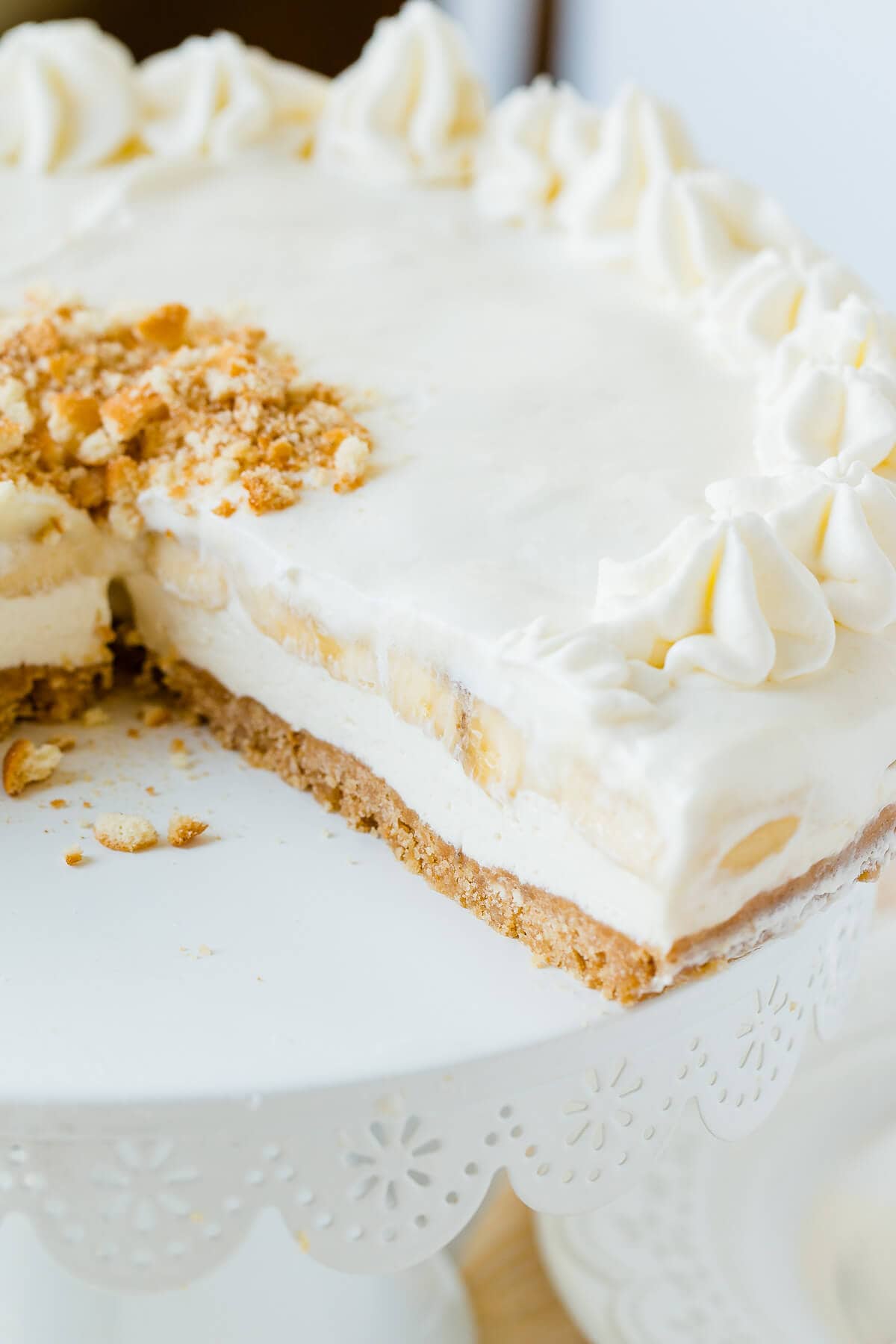 How to Remove No-Bake Cheesecake From a Springform Pan

If you’re new to the world of easy no-bake cheesecakes, you may be a little intimidated at the thought of removing this banana cream cheesecake from the springform pan. Don’t worry, it’s not so bad! Here’s how to remove cheesecake safely from a pan: 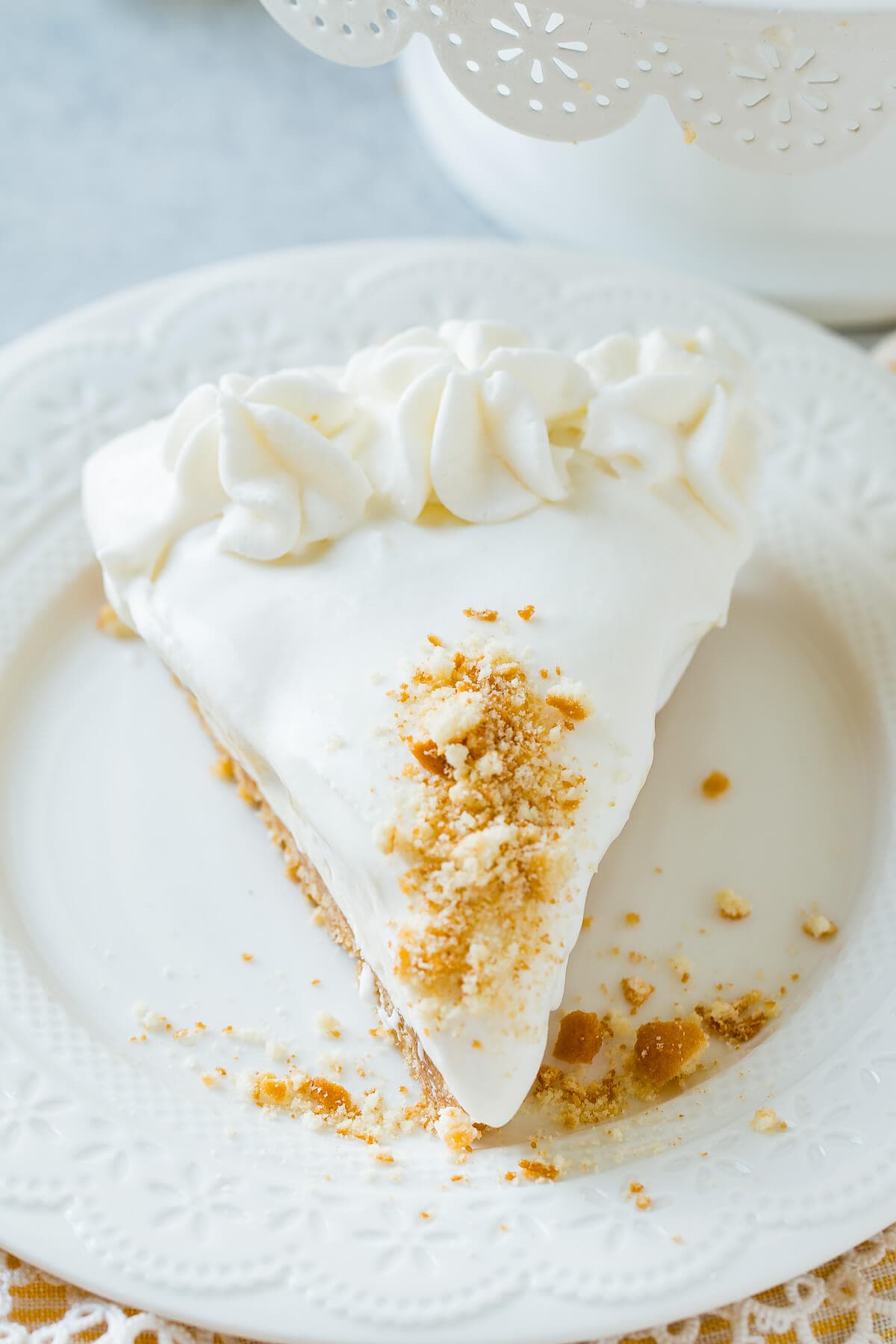 Do I Have to Use a Springform Pan?

Any cake pan or pie plate will do just fine as a substitute for a springform pan. Line the pan with foil or parchment paper so that you can gently lift the cake out when it’s done. Leave a good length of foil or paper hanging out of the pan to make it easier to lift.

Can You Freeze No-Bake Cheesecake?

Yes, you can make any type of cheesecake in advance and store it in the freezer or freeze leftover pieces.

If you don’t have Nilla Wafers on hand, you’re welcome to make a traditional graham cracker crust instead. And if neither graham crackers nor Nilla Wafers are sold in your area, try using another crisp, mildly sweet cookie in the crust.

Note that you need to use brick-style cream cheese in this banana pudding cheesecake recipe. Lite or whipped cream cheese won’t give you the same consistency.

Same logic applies to using half and half or whole milk in place of the heavy whipping cream. I know this no-bake banana cheesecake isn’t the lightest of desserts, but you need to use real whipping cream to achieve the right texture and flavor. 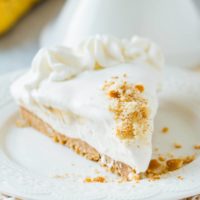