These Pecan Pie Brownies are topped with an ooey gooey layer of buttery pecans! This recipe uses a brownie mix, but I promise this dessert tastes homemade! 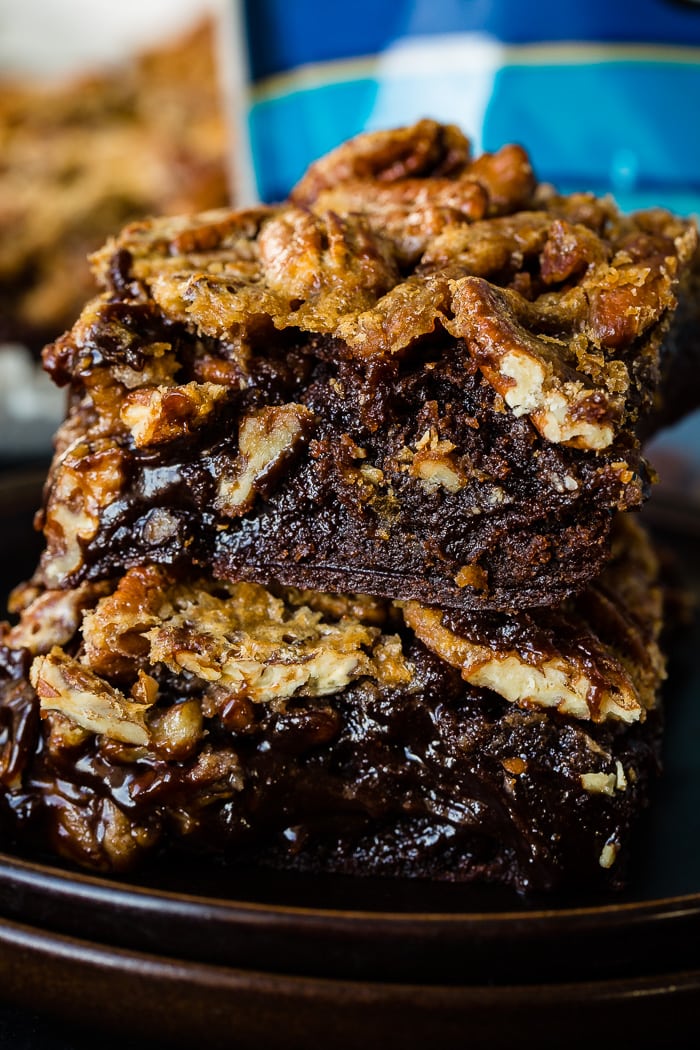 Easy Thanksgiving Dessert for a Crowd

Pecan pie brownies are a mix of your favorites — a delicious pie and those fudgy brownies, but while it’s a super easy recipe to make it can also cause some major issues. This is one of those recipes where we prefer to bust out a shortcut with the brownies, but you must follow everything to a T or you’ll end up with gooey brownies, and not in the way you’re thinking.

It’s a real mess to be scooping brownies out of a pan using a large metal spoon instead of carefully cutting those perfect lines and going in for your favorite piece.

We have yet to post a classic pecan pie recipe, so I do apologize that isn’t on our site yet, but hear me out. I’ve never really had pecan pie. Like really at all. That means that I have to do a heck of a lot of research in order to figure it all out, and I’m willing, for sure, but Cade is a southern boy and I need him weighing in on all things so it’s taking a bit longer.

In fact, if one of you has the most amazing pecan pie recipe we would love to try it out!

Pecan pie needs one really important thing, pecans. Obviously. That was exhausting to say, but it’s true. Start out with good pecans and then make a brown sugar mixture that you’ll fold the nuts into. This is really important, so pay very close attention.

While we are waiting on that pecan pie recipe, we do feel confident in these chewy, crunchy, brown sugar lovin’ Pecan Pie Brownies. 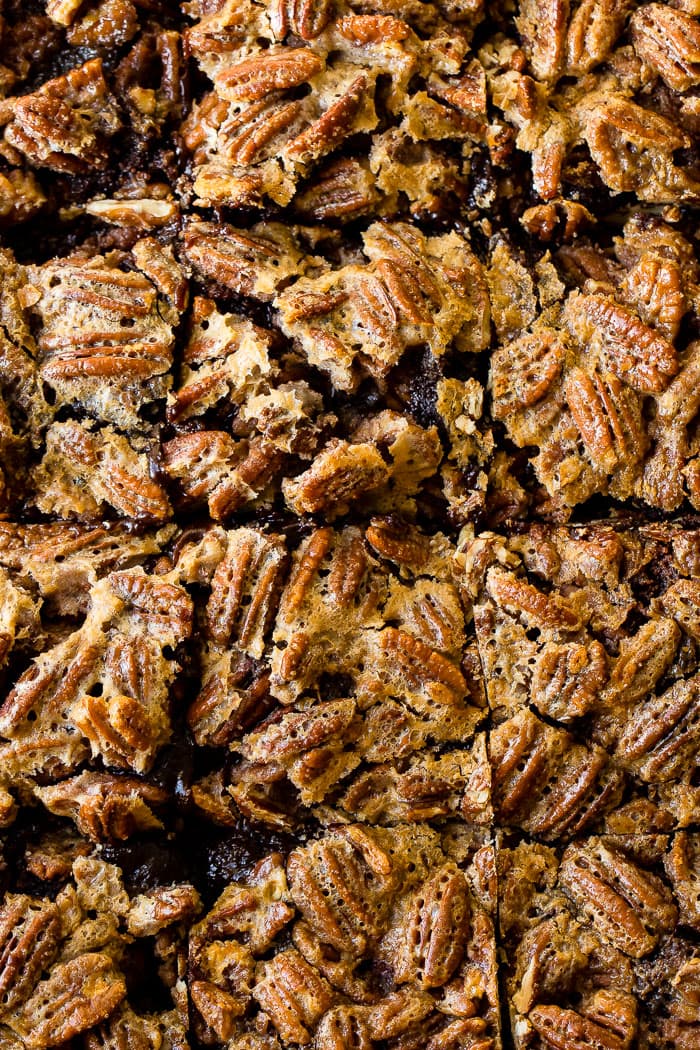 Need a recipe using packaged brownie mix? These pecan brownies are just the treat you need! Here’s what goes into this chocolate Thanksgiving dessert: 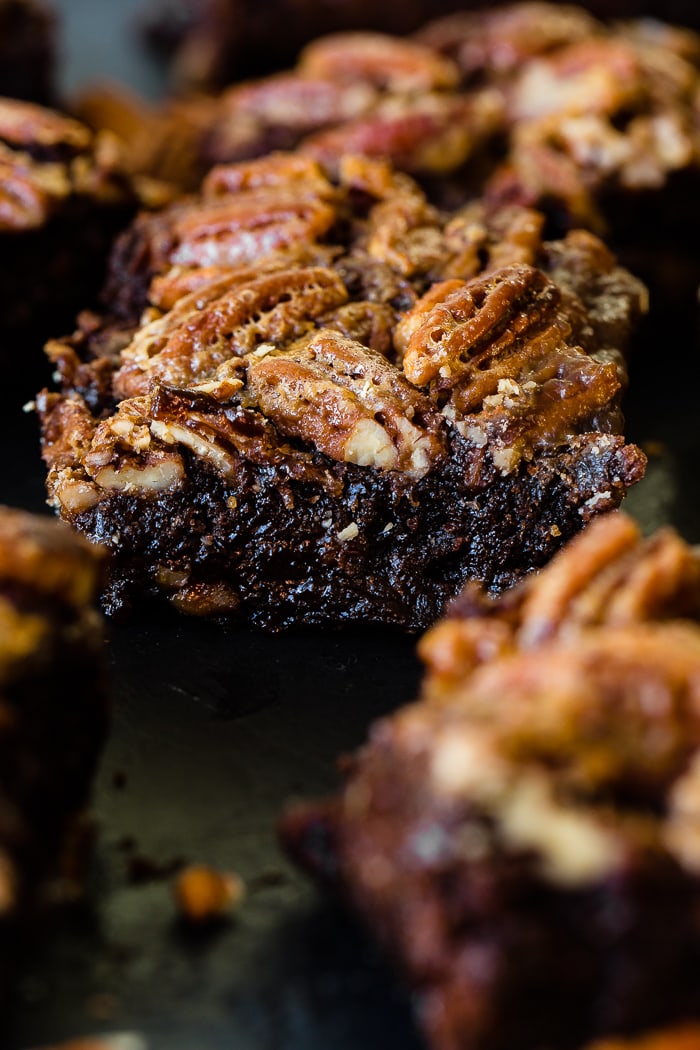 How to Make Pecan Pie Brownies 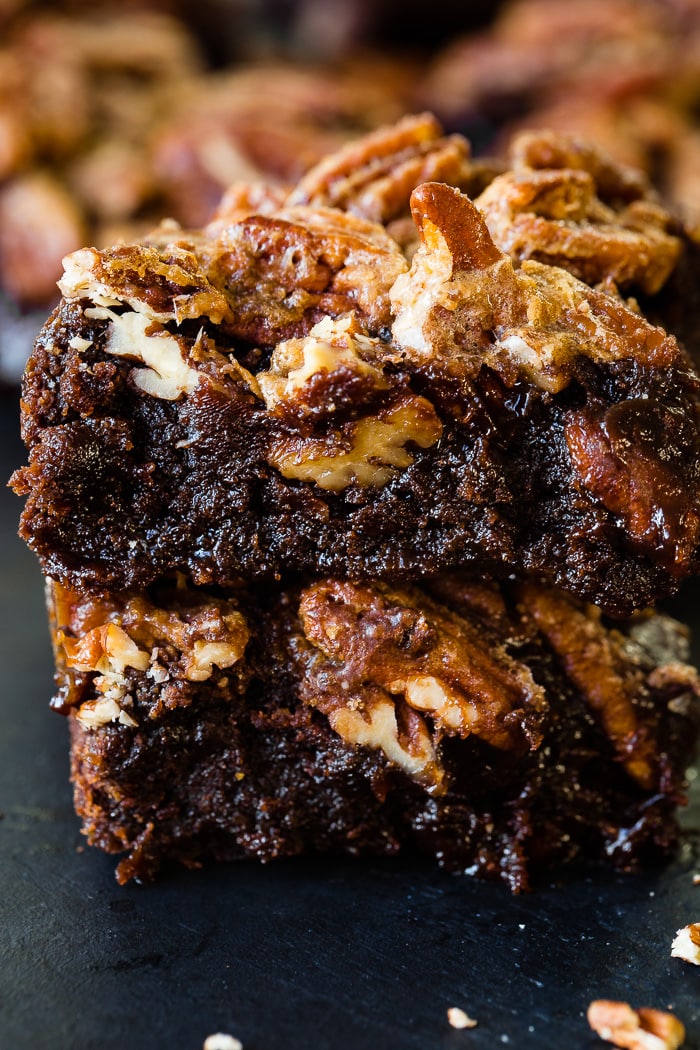 Can You Freeze Pecan Pie Brownies?

Pecan pie brownies are easy to freeze. Just make sure that everything is absolutely cool before you even attempt anything. Then, take the brownies and place them on plastic wrap in a single layer and wrap them multiple times. Store the brownies in two gallon sized Ziploc bags.

How to Store Pecan Pie Brownies

You can store pecan pie brownies on the counter for up to 4 days, covered with saran wrap, foil or with a lid. You can also extend the life a little more if you store the brownies in the fridge, also covered.

What Kind of Brownie Mix Should I Use?

Use your favorite brownie mix! You need two standard size boxes. Make sure your brownie mix is plain and doesn’t contain mix-ins.

Tips for Making These Pecan Brownies

After mixing the pecans and the brown sugar all together you’ll spread the mixture on top of the brownies, but too much of the liquid will keep the brownies soggy no matter how much you cook them, so listen, you have to mix the nuts well, but be willing to not add every last bit of liquid to the brownies.

If you need a from scratch brownie base we recommend trying out our blender brownies. Ina Garten’s Brownies are pretty dang amazing as well. 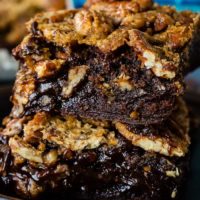