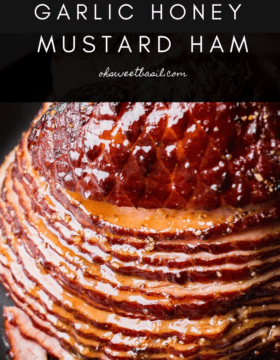 After posting the World’s Best Brown Sugar Ham we just had to come up with another Easter Ham Recipe. Our Garlic Honey Mustard Ham is so easy, but so flavorful! 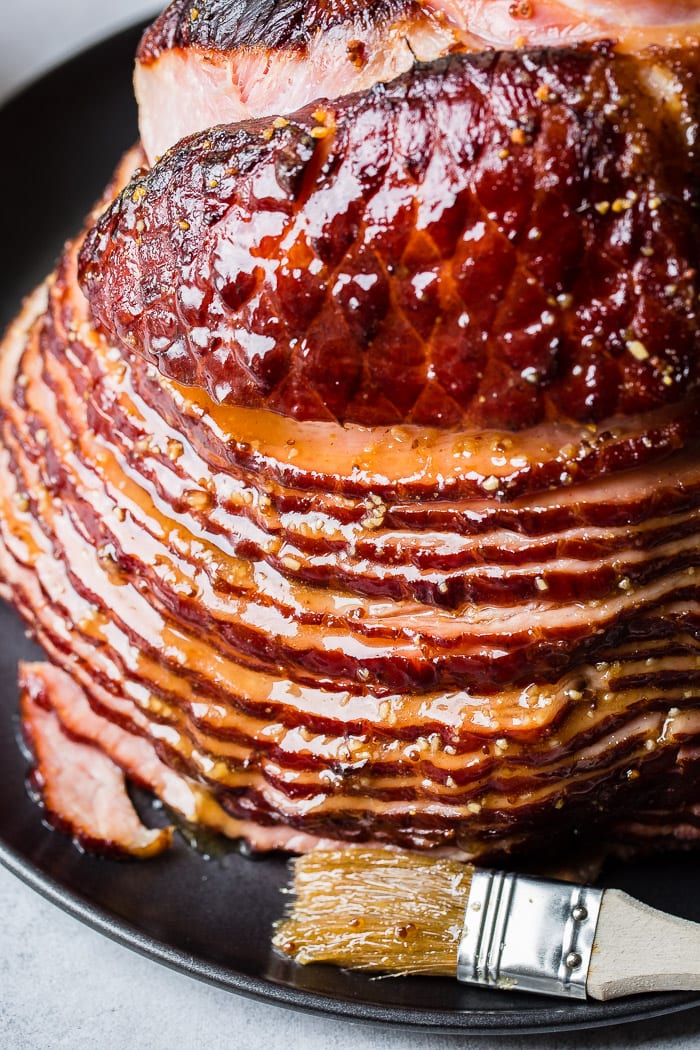 Phew, who knew that testing a ham could be so difficult. There is probably a better way, but we are bit odd in that we always try to test a recipe exactly as you’ll make it at home which means that because there weren’t any small spiral hams we had no choice but to cook a huge ham multiple times. Do you have any idea how much we used our Food Saver so that we could perfectly freeze the meat so we could eat it at a later date?

I think the kids have had it. Don’t fool yourselves into thinking that just because we are food bloggers that we don’t have picky eaters. They said they need a little bread from ham and with the insane amounts we’ve been eating I can totally respect that.

While eating more ham this week isn’t something they are interested in, our youngest is certainly interested in helping me cook it. He’s 2 now and that means that he has caught on to everything we are doing. I can’t even sneak a chocolate chip under my tongue without him knowing which makes for an interesting photography session. 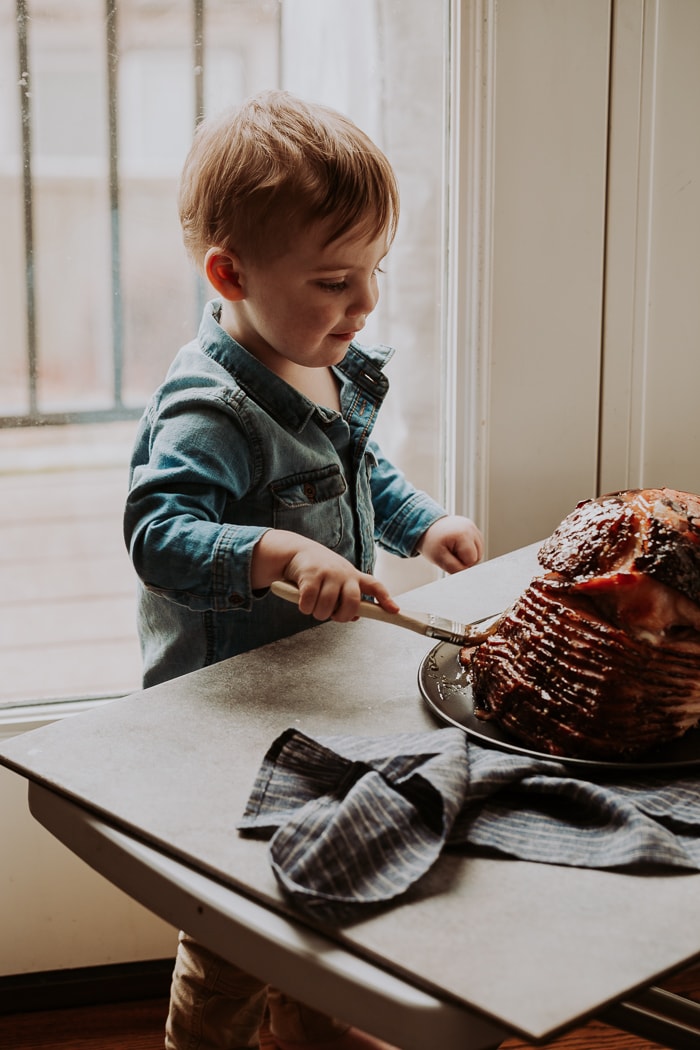 I’ve learned to find ways to get the kids involved or to feel like they are involved in order to keep going on my to-do list. Gently explaining that we would need him to “softly paint” the glaze on the ham worked for most of the photos and while they may not all have turned out perfect because he was often in my light or blocking the photo, it did allow me to get some done.

And more importantly, who knows if time with me was exactly what he needed and how could I be sad about that? 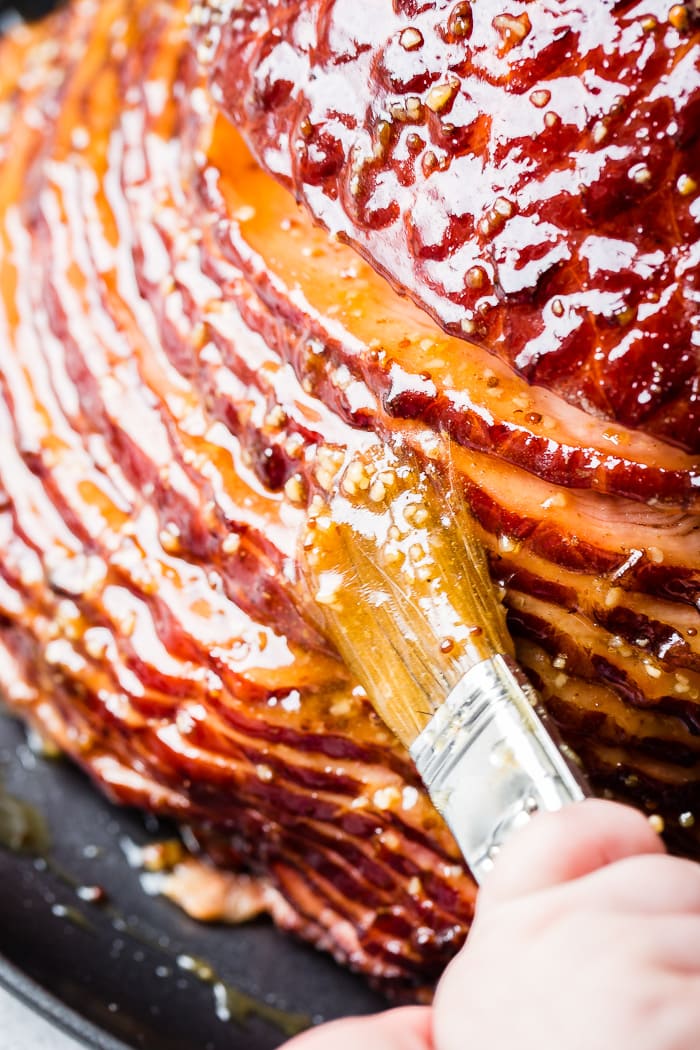 How to Serve Easter Ham

Easter ham should be served already cut off of the center bone. I know that it looks beautiful to present a full ham, but it’s the exact same as a Thanksgiving turkey, it really is best to carve it in the kitchen and then serve it in slices.

What to Serve Ham with

Looking for what to serve ham with? Us too. We get tired of the same old recipes for dinner.

I know this isn’t the norm, but we love a fresh side next to ham. It just lightens things up a bit. This Broccoli Salad, Texas Roadhouse Loaded Sweet Potato, these FLUFFY Homemade Rolls, and of course, the Utah classic, Funeral Potatoes.

How to Slice a Spiral Ham

We’ve written an entire post on how to slice a spiral ham so I won’t go over it again here, but you should remember that sliced ham cools quickly and dries out, so the best thing to do as you slice it is to cover it properly.

Slice the ham off of the bone and quickly place the meat back in the pan with the juices, cover with foil and place in a warm oven while you take the other sides to the table. Once everything is on, grab the ham and serve it! 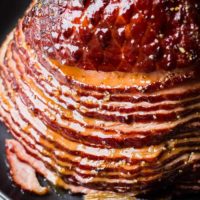 3.95 from 51 votes
Prep Time: 5 minutes
Cook Time: 1 hour 30 minutes
Total Time: 1 hour 35 minutes
Servings: 12 servings
Save Recipe Print Recipe
After posting the World's Best Brown Sugar Ham we just had to come up with another Easter Ham Recipe. Our Garlic Honey Mustard Ham is so easy, but so flavorful!