We’ve tried many a ham recipe, but this is probably the World’s Best Brown Sugar Ham. The best part is, you can make it in the oven or the slow cooker. 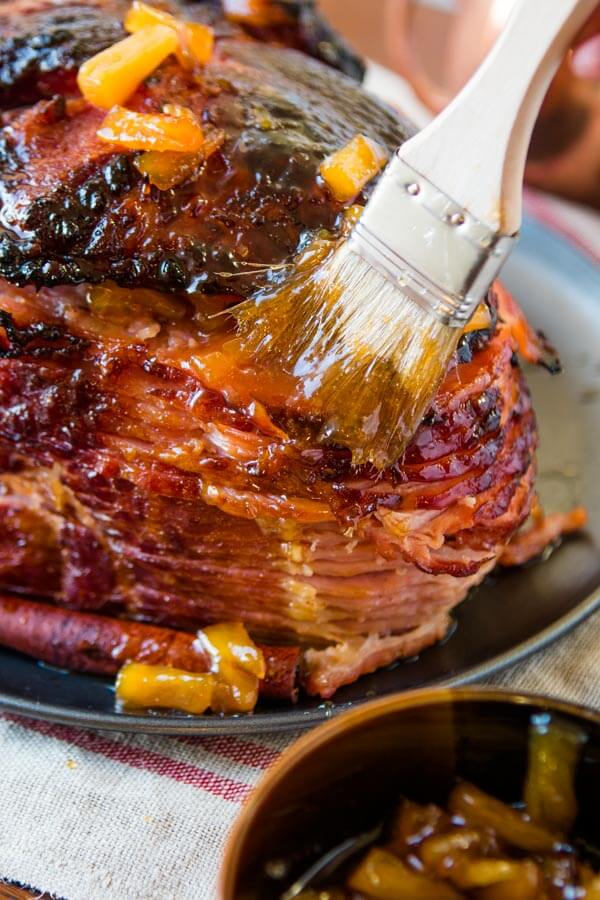 I know that Cade and I are guilty of calling many of our recipes the “best ever,” but this is truly the BEST baked ham recipe I’ve ever made. The sticky sweet ham glaze that crisps up in the oven, the ultra moist spiral ham, the bits of pineapple everyone wants a bite of — every part of this baked ham is finger-licking good.

Even better, this spiral ham recipe is actually so easy to make. If you’ve never made a whole ham recipe before, I understand if you’re feeling a little intimidated right now. But once you slice the ham, all you have to do is whip up a quick sauce for the ham, brush it over the meat, and bake. For extra tips and tricks, make sure to check out our post on how to carve a spiral ham. Hopefully that post will clear up any questions you might have about prepping this brown sugar ham!

Whether you’re wanting to make a Thanksgiving ham, a Christmas ham, an Easter ham, or a ham for any other occasion, you can’t go wrong with this classic brown sugar ham recipe! 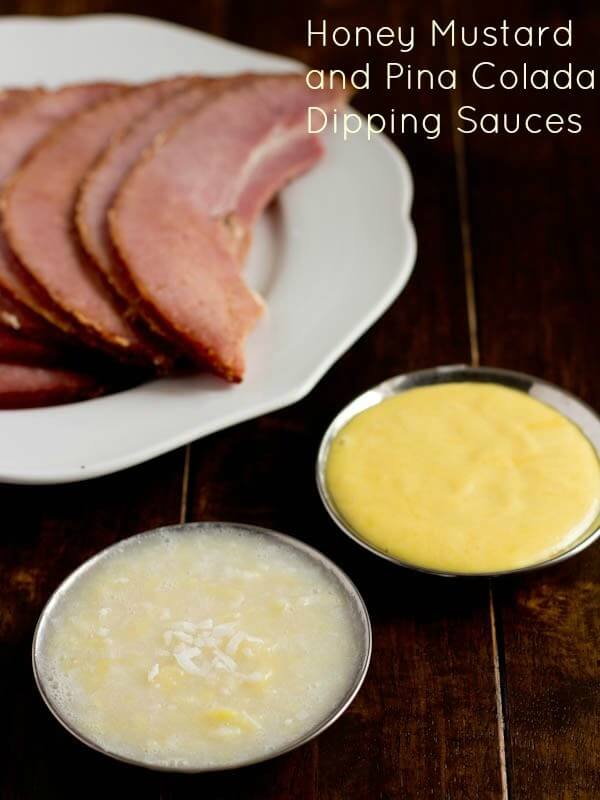 What’s in This Brown Sugar Ham?

You actually need very few ingredients to make this whole ham and ham glaze recipe! All you need is:

If you like to serve your brown sugar ham with a dipping sauce, our family and extended family are obsessed with these holiday ham dipping sauces (there are two recipes, a piña colada dipping sauce and a honey mustard sauce). We never serve our ham without these two sauces!

How Much Ham Per Person? 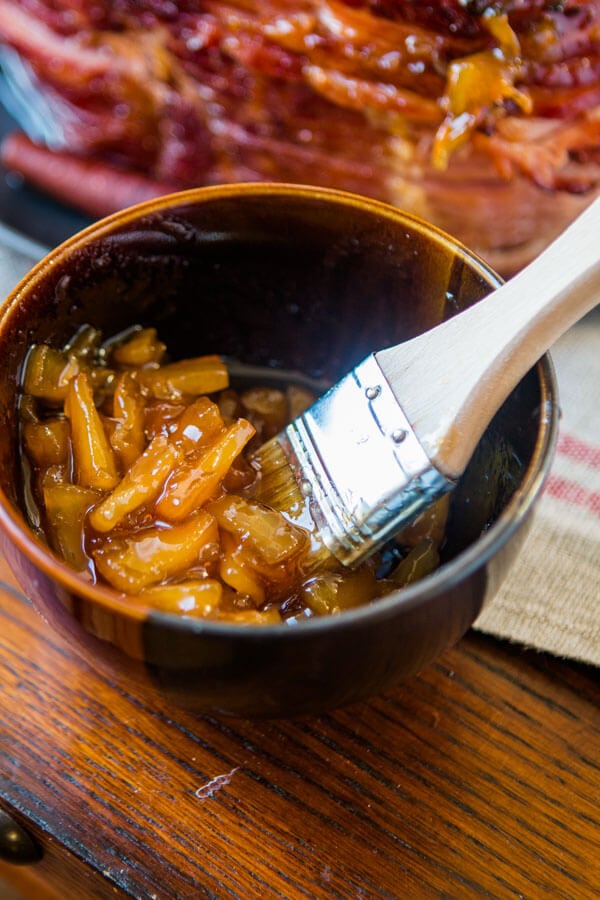 How to Make Brown Sugar Glaze for Ham

This brown sugar and pineapple ham glaze recipe can’t be beat! It’s incredibly easy to make, and it will take your Easter or Thanksgiving ham to the next level. Here’s how to make our favorite ham glaze recipe:

How to Cook a Ham in the Oven

Believe it or not, cooking a whole ham is fairly simple. Here’s what you do:

How Long to Bake Ham

If your ham isn’t 10 pounds exactly, we recommend baking your ham for roughly 10 to 12 minutes per pound.

What to Serve with Ham

This baked brown sugar ham pairs perfectly with any classic holiday side. A few of our favorite foods to serve alongside baked ham include:

Who wouldn’t love a holiday spread like this? One thing to keep in mind is that you don’t want to be opening and closing the oven door to baking more casseroles and sides while the ham is cooking. So if you know you’ll be making sides that require time in the oven, try to pick recipes that require the same oven temperature as the ham and bake everything together.

Watch this video on how to make baked ham! 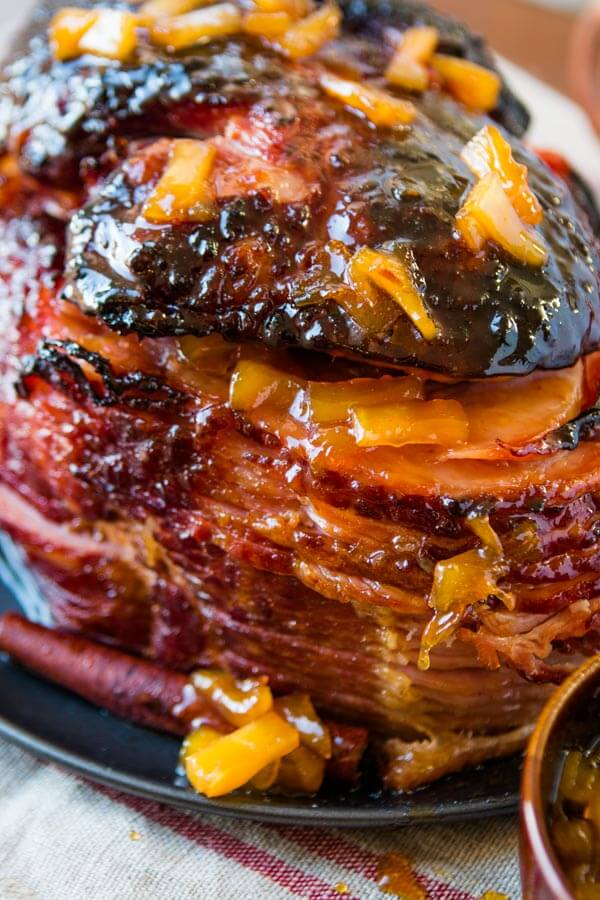 How to Store Ham Leftovers

Leftover brown sugar ham and pineapple ham glaze should be kept in an airtight container in the fridge. It will last up to 4 days in the fridge, if stored correctly.

How to Reheat Ham

If you need to reheat the entire brown sugar ham, wrap it tightly in foil so it doesn’t dry out, then heat it in a 300ºF oven for roughly 15 minutes per pound.

If you need to bake this ham ahead of time and reheat it prior to serving to friends and family, you can also keep the ham warm in a slow cooker. This is a great alternative to reheating the brown sugar ham in the oven since your oven will likely be full to bursting during the holidays!

If your slow cooker isn’t big enough to fit the whole ham, slice the meat from the bone and then place it in the slow cooker. It won’t be as nice of a presentation as carving the brown sugar ham with pineapple glaze in front of everyone, but it’ll still taste good, which is what matters!

Can You Freeze Ham?

Yes, this brown sugar ham can be sliced and frozen for later. To freeze the ham, let it cool to room temperature and then wrap individual portions in aluminum foil. Then, store the foil-wrapped portions in a freezer bag (the foil makes it easier to separate the slices once frozen. Trust me, you don’t want to store frozen ham in one big lump!).

To thaw the frozen ham, place it in your fridge overnight. Or add the frozen ham directly to your favorite soups and stews and cook until it’s heated through. 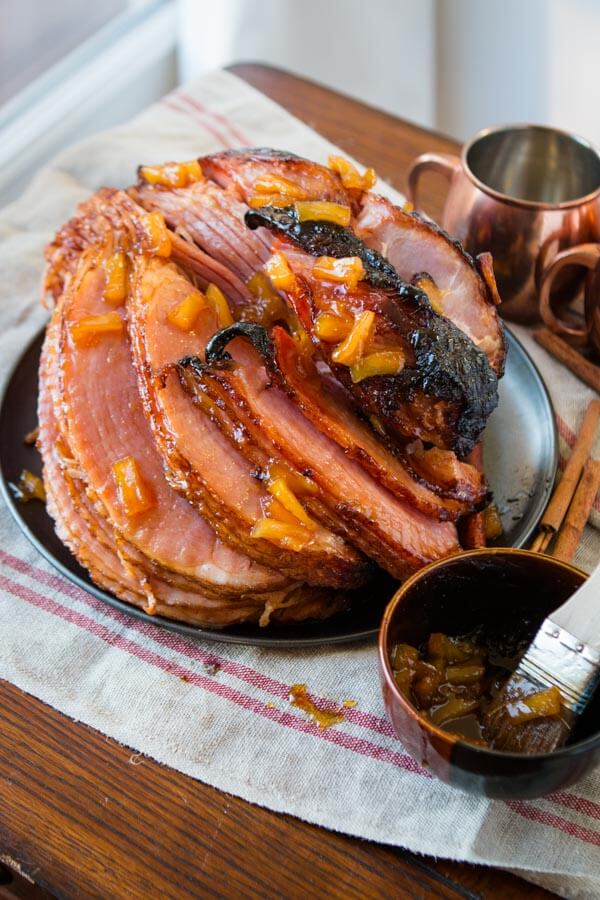 Can I Use Another Fruit Besides Pineapple?

If you or a loved one can’t eat pineapple or if you simply ran out, you can also use canned mandarin oranges in this recipe. Make sure to buy mandarin oranges packed in water and not syrup, though.

Should I Cover the Ham with Foil?

We don’t cover our baked ham with foil, no. However, if you’ve already put your ham in the oven with foil over top your ham should turn out fine.

Should I Buy Boneless or Bone-In Ham?

We prefer bone-in hams since they have better flavor. Plus, you can use the ham bone and any leftover ham in Ham Hock Soup or ham and beans! 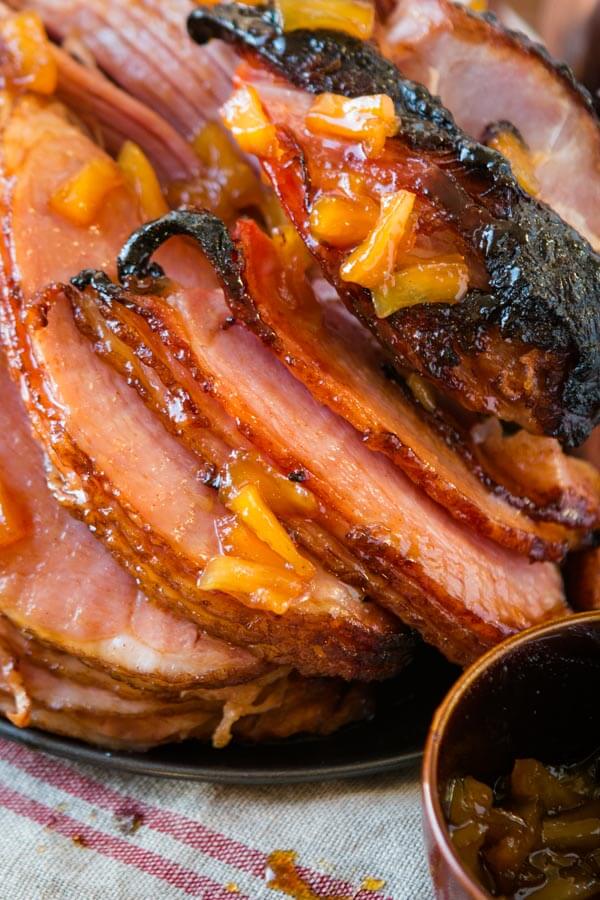 Tips for the Best Baked Ham

You can use a pre-cooked spiral cut ham for this brown sugar ham recipe. The reason the ham needs a full 90 minutes in the oven is because it needs to be heated through all the way. If you use a raw ham, you’ll need to cook it for longer.

Because this whole ham recipe is so simple, we highly suggest using the exact ingredients we’ve listed in the recipe below. Dijon mustard in particular is a must. Regular yellow mustard doesn’t have the same depth of flavor and is a little harsher than Dijon. And using a cinnamon stick versus ground cinnamon will keep the ham glaze from being too cinnamon-y.

Also note that this brown sugar ham recipe is perfect in the oven as the sugars caramelize into the most beautiful sight ever. However, you can also make a whole ham in the slow cooker as well! If you’d rather make your ham in a slow cooker, we suggest following our Slow Cooker Ham recipe. 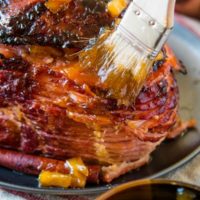 3.7 from 98 votes
Prep Time: 15 minutes
Cook Time: 1 hour 30 minutes
Additional Time: 1 hour 45 minutes
Total Time: 3 hours 30 minutes
Servings: 18 -20
Save Recipe Print Recipe
We've tried many a ham recipe, but this is probably the World's Best Brown Sugar Ham. The best part is, you can make it in the oven or slow cooker.

This is a story I read last year and it really touched my heart. It seemed perfect for the Christmas season, which is quickly approaching. So we hope you’ll read it, enjoy it and share it with someone — and of course after that make sure you pin the World’s Best Brown Sugar Ham because it is so stinking delicious!

This is the full talk. It’s called Shepherds of Israel and you will love it.

“Some years ago, it was my privilege to visit the country of Morocco as part of an official United States government delegation. As part of that visit, we were invited to travel some distance into the desert to visit some ruins. Five large black limousines moved across the beautiful Moroccan countryside at considerable speed. I was riding in the third limousine, which had lagged some distance behind the second. As we topped the brow of a hill, we noticed that the limousine in front of us had pulled off to the side of the road. As we drew nearer, I sensed that an accident had occurred and suggested to my driver that we stop. The scene before us has remained with me for these many years.

An old shepherd, in the long, flowing robes of the Savior’s day, was standing near the limousine in conversation with the driver. Nearby, I noted a small flock of sheep numbering not more than fifteen or twenty. An accident had occurred. The king’s vehicle had struck and injured one of the sheep belonging to the old shepherd. The driver of the vehicle was explaining to him the law of the land. Because the king’s vehicle had injured one of the sheep belonging to the old shepherd, he was now entitled to one hundred times its value at maturity. However, under the same law, the injured sheep must be slain and the meat divided among the people. My interpreter hastily added, “But the old shepherd will not accept the money. They never do.”

Startled, I asked him why. And he added, “Because of the love he has for each of his sheep.” It was then that I noticed the old shepherd reach down, lift the injured lamb in his arms, and place it in a large pouch on the front of his robe. He kept stroking its head, repeating the same word over and over again. When I asked the meaning of the word, I was informed, “Oh, he is calling it by name. All of his sheep have a name, for he is their shepherd, and the good shepherds know each one of their sheep by name.”

It was as my driver had predicted. The money was refused, and the old shepherd with his small flock of sheep, with the injured one tucked safely in the pouch on his robe, disappeared into the beautiful deserts of Morocco.

As we continued our journey toward the ruins, my interpreter shared with me more of the traditions and practices of the shepherds of that land. Each evening at sundown, for example, the shepherds bring their small flocks of sheep to a common enclosure where they are secured against the wolves that roam the deserts of Morocco. A single shepherd then is employed to guard the gate until morning. Then the shepherds come to the enclosure one by one, enter therein, and call forth their sheep—by name. The sheep will not hearken unto the voice of a stranger but will leave the enclosure only in the care of their true shepherd, confident and secure because the shepherd knows their names and they know his voice.

The words of the Master Shepherd rang loudly in my ears:

“But he that entereth in by the door is the shepherd of the sheep.

“To him the porter openeth; and the sheep hear his voice: and he calleth his own sheep by name, and leadeth them out.

“And when he putteth forth his own sheep, he goeth before them, and the sheep follow him: for they know his voice.”

I love that message. What a great lesson to be learned from such a simple story.