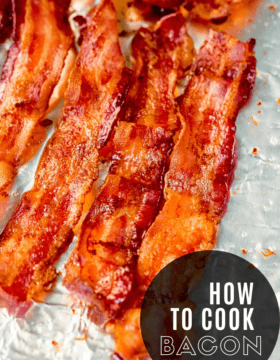 Ready to learn How to Cook Bacon the right way? Because you might be doing it wrong and you don’t even know it. One trick= the best bacon ever. 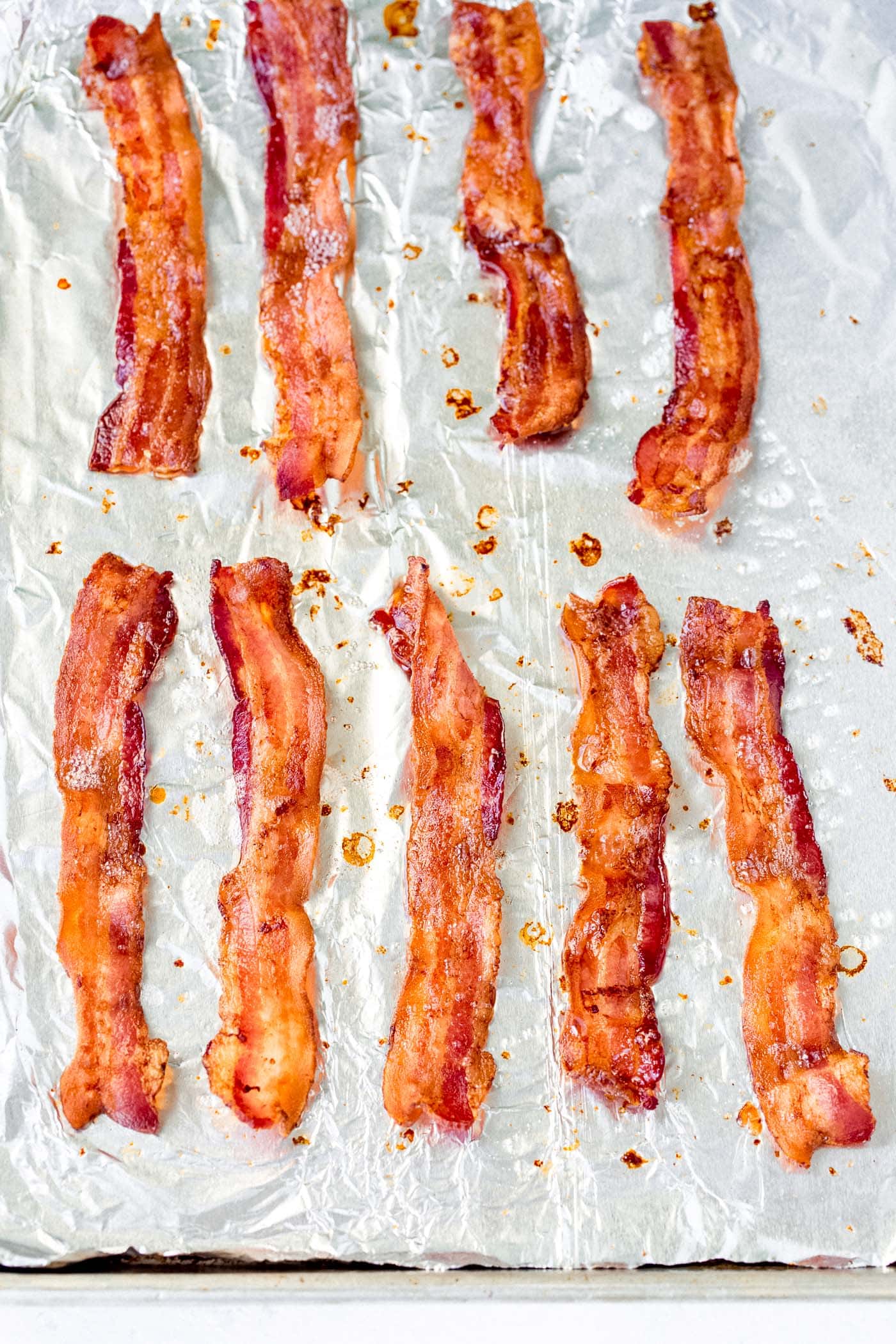 Alright, let’s start out with a little math.

If Russell has 12 pieces of bacon and eats 8 of those pieces, what does Russell have?

The Love of Bacon

There’s nothing quite like bacon because it hits everything that makes you feel so much inside, the smell of bacon, the sound of it sizzling in the pan, popping and snapping of the grease as it explodes from the heat, the crunchy texture just waiting to be gobbled up.

Actually the truth is, I hated bacon as a kid. Greasy, crunchy and fatty, often over or undercooked= “naaaahhhh, pass.” I was a hard pass on that one. 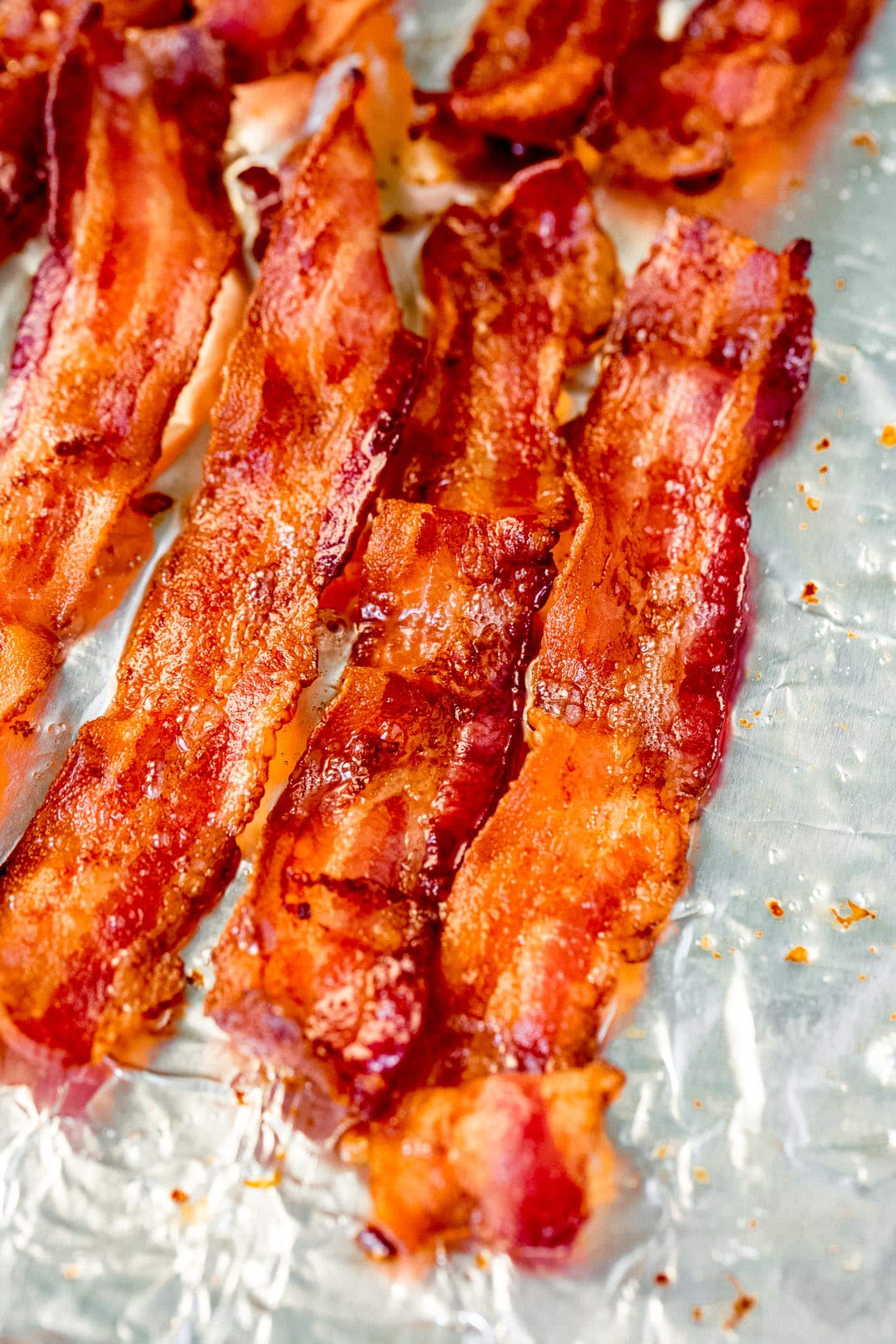 The Moment That Changed My Life Forever

One morning I woke up and the side of our tent was just a little damp from from the dew that had settled on the camp grounds that morning, it was going to be a chilly start to the day. My mom had taught me the best trick, when you go to bed, put your clothes in the bottom of your sleeping bag and they will be warm all night. In the morning you can just shimmy out of your jammies and right on into your toasty warm clothes. GENIUS.

Carefully I slipped into my peg-legged acid wash jeans, an old sweatshirt and pulled my hair through a dainty scrunchie, only brushing against the side of the tent half a dozen times and getting my sleeves wet in the process.

Zzzzzzeeeerrrrppp, the chill of the morning rushed in to the musty tent as I flung open the flap and instantly I could hear the distinct sounds of breakfast-Who needs Christmas morning sounds when there’s breakfast?!

I scurried over to a huge fire pit and a little shaggy haired boy in a puffy coat was standing there helping his dad with breakfast for all of the people gathered for a church campout.

“You want any bacon?” he asked. Quite polite for a little 9 year old, but I wasn’t suckered in, “Nah, I don’t like bacon.”

And so, at 9 years old I dug my heels in like a picky little eater would, “Me. I don’t.” And that was that.

It wasn’t until college that I realized the glory of bacon AND that people were cooking it wrong all over the world. But we will get to that in a minute.

First, let’s go over a few things you should know when you’re looking to buy bacon.

Alright, before we learn how to make bacon could we go over the best bacon to buy. Here’s the breakdown depending on what you like. 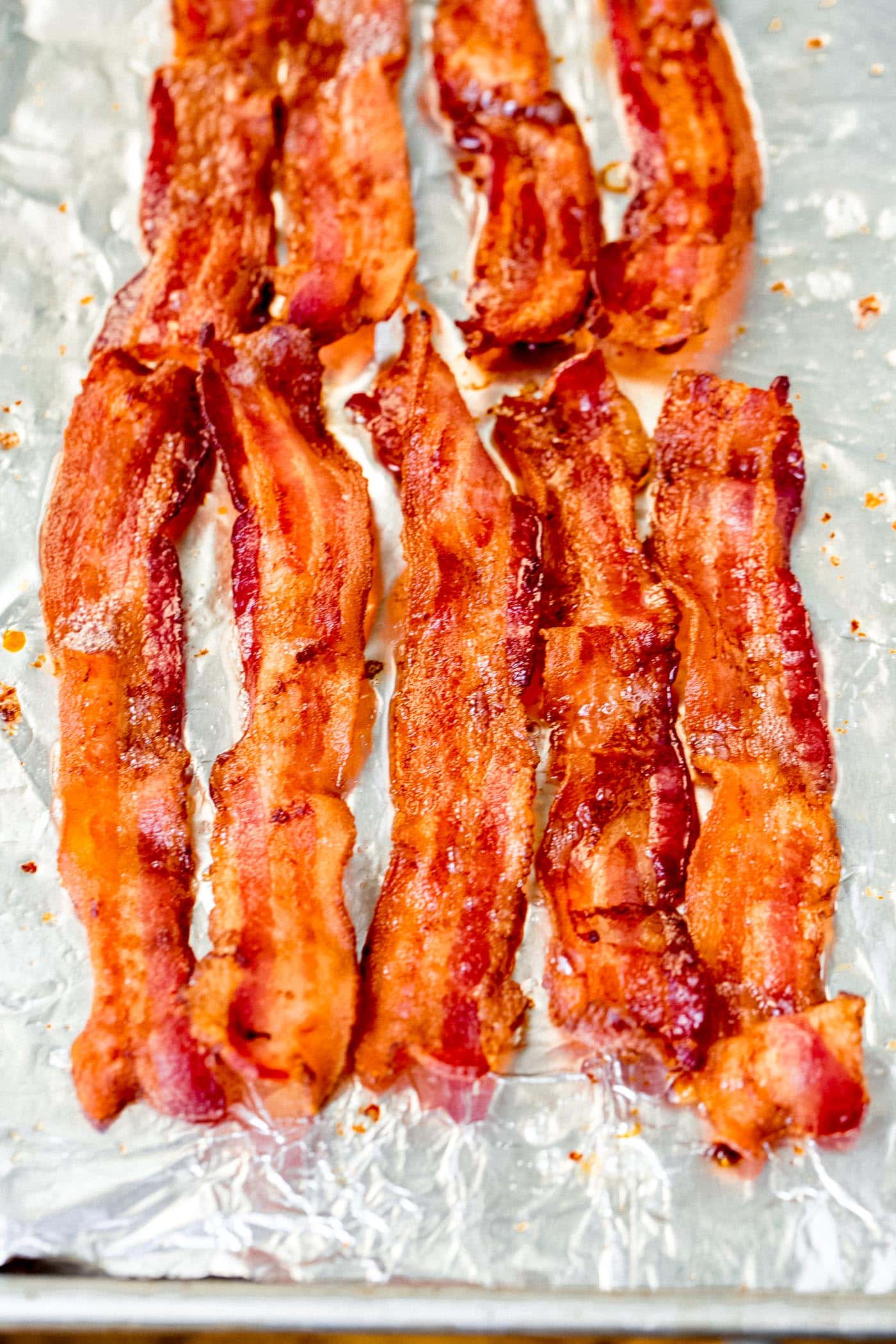 Ahhh the debate of the Oh, Sweet Basil household… Cade likes it extra thick and I like it thin.

Don’t get me wrong, I love thick bacon as well, but I believe bacon should match the meal. Thick bacon just is not as good for crumbling on top of potato soup, it sinks. Thin bacon is harder to enjoy on a good BLT.

It really depends on what you’re going for, but in the end, quality is most important. Get the bacon that tastes the best and isn’t totally see through.

Let me teach you what I mean, it all starts with a COLD pan.

The Best Way to Cook Bacon

Our favorite way to cook bacon is not in the oven. Don’t worry, I was wrong as well. I’ve been baking bacon for years and years, but I recently stopped when I started noticing that I was missing that crisp snap of the bacon.

How to Cook Bacon Stovetop

The best way to cook crisp bacon is actually stove top, cooking bacon in the oven is only for crowds, so you’re going to want to invest in a good, expensive is not necessary, cast iron pan.

Bacon in the Oven

Breakfast is not breakfast if there’s not bacon. Alright, that’s not true but all these years I’ve been making bacon in oven thinking I was so smart and it turns out that unless you’re feeding a crowd, it’s not the best way. Bacon cooked in the oven is cooked at a higher heat sitting on a pan where the heat comes from above. Yes, it is slower and renders out good fat to be used later, but it doesn’t crisp like in a pan. Not completely.

Bacon in the Oven Two Ways

#1- If you’re looking for more crisp bacon you’ll want to use an oven-safe rack. This allows the hot air to circulate the bacon and you’ll end up with more crisp bacon. I’ve had issues with the bacon getting stuck plus bigger, more awkward dishes to clean.

#2- Place tin foil on a cookie sheet with an edge (a regular is actually called a half sheet pan) and bake according to directions below. This is the method I generally use. 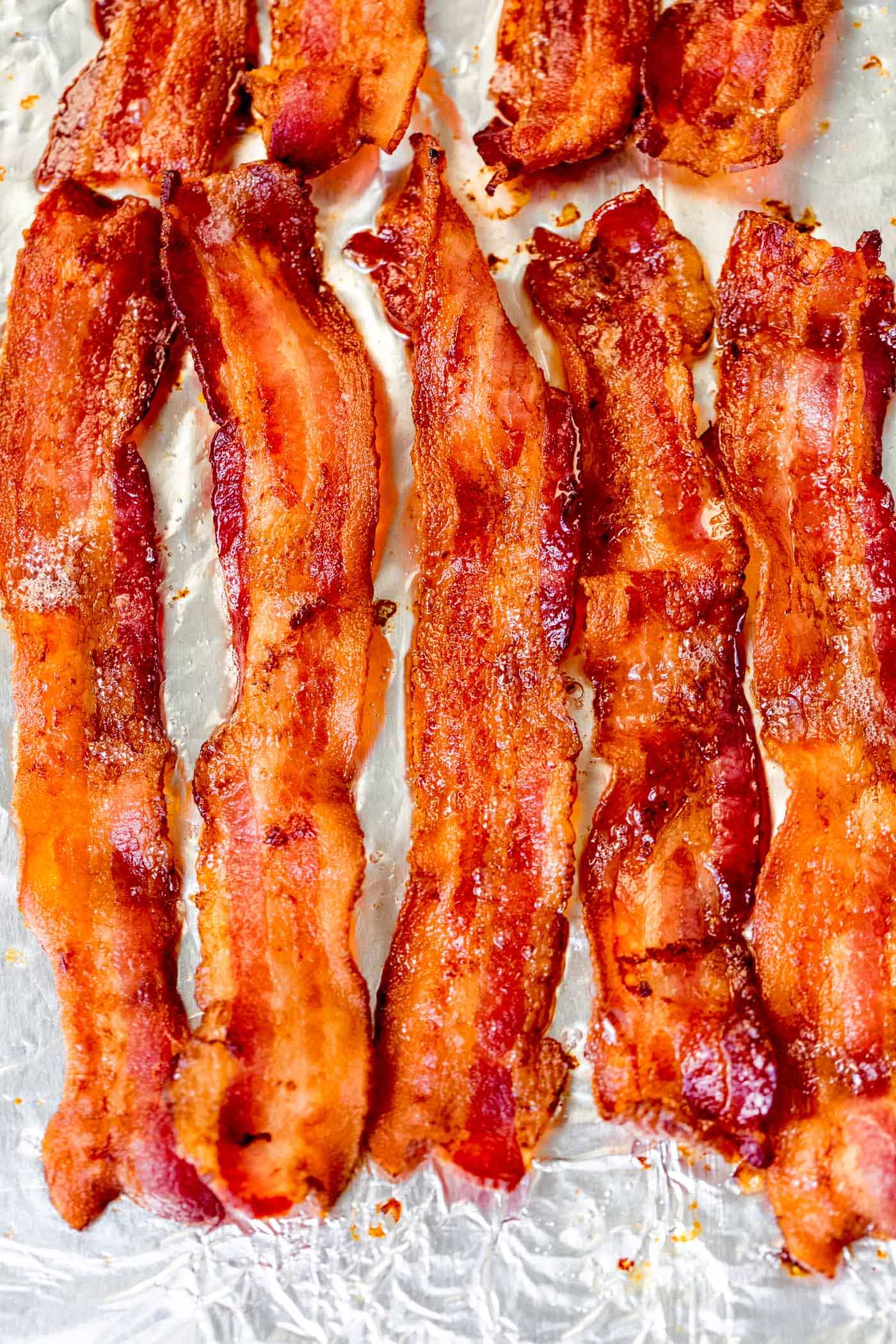 How to Cook Bacon in the Oven

What Is The Difference Between Bacon And Pork Belly?

Pork belly is bacon that is uncured, unsmoked and unsliced. It’s thicker and often used in restaurants to make tacos or thick BLT sandwiches.

Cured- Cured bacon is made by adding artificial nitrates into the regular salt and brine mixture.

Finally, Uncured- For those looking to eliminate nitrites and nitrates from their diet uncured might be the way to go but the studies are not solid yet. Also, it’s worth noting that virtually every uncured supermarket brand of bacon contains naturally occurring nitrites in the form of celery powder, sea salt, and other things.

How Long Will Uncooked Bacon Keep?

Unopened, uncooked bacon will keep for about 1 week in the refrigerator, but be sure it’s in a sealed package. We often freeze our bacon to get more time out of it.

For How Long Will Cooked Bacon Keep?

Left-over cooked bacon will keep for 4-5 days in the refrigerator.

Can You Reheat Bacon?

Yes, the best way to reheat bacon is in the oven or in a taster oven.

Place the bacon in a baking pan and cover with foil.

Heat at 350 degrees for about 10 minutes, or wrap in paper towels and microwave for 30-45 seconds.

Recipes that Use Bacon: 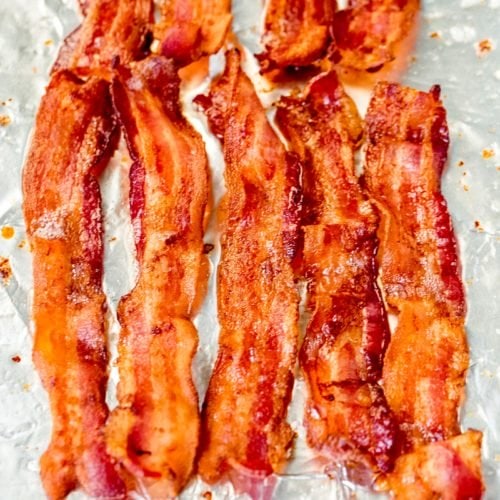 How to Cook Bacon

No ratings yet
Prep Time: 5 minutes
Cook Time: 20 minutes
Total Time: 25 minutes
Servings: 8
Save Recipe Print Recipe
Crisp and chewy bacon always matters. I love bacon but it's only recently that I learned an important mistake I was making in preparing PERFECT bacon.

Bacon in the Oven