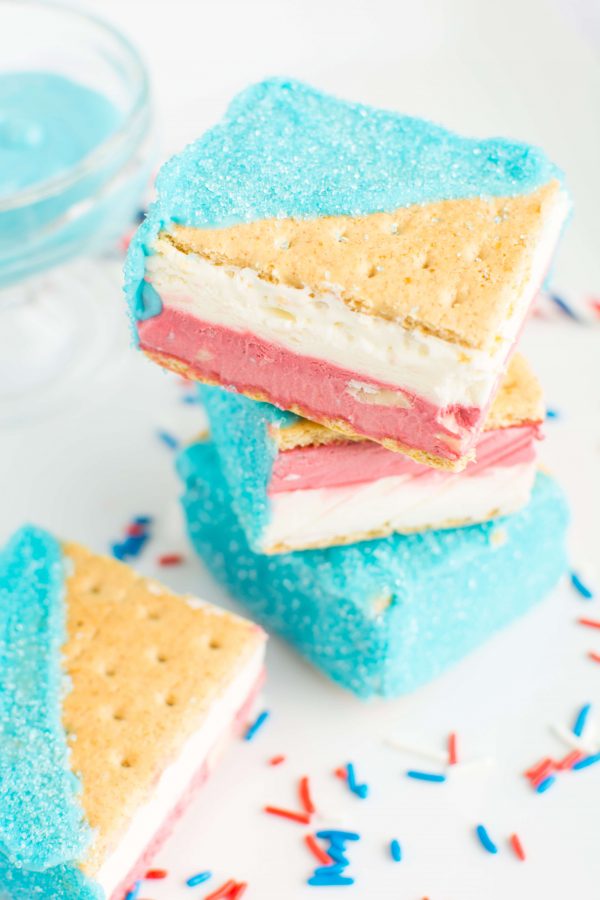 Hello again to all of you lovely sugar fanatics out there! It’s Jillian, back again from A baJillian Recipes to share my newest and coolest creation with all of you! And since the Fourth of July is less than two weeks away, I’m sure you could all use some help in deciding what you’re going to serve at your firework-filled Independence Day celebrations. Well, look no further… 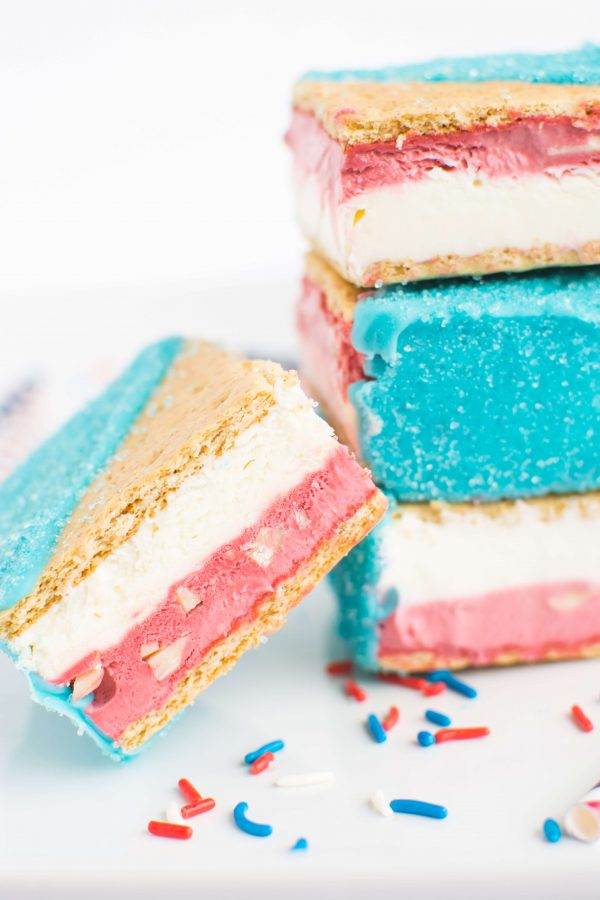 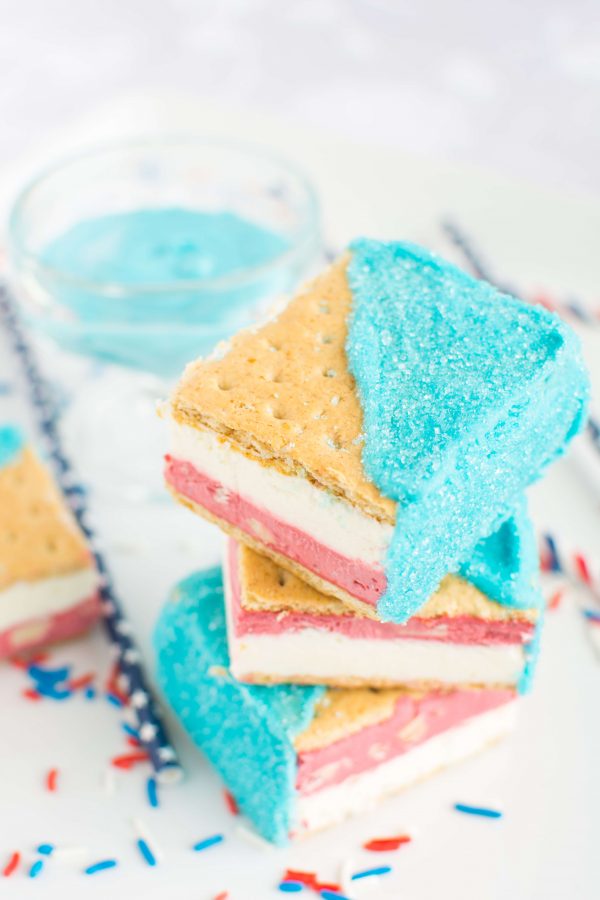 Just look at those cute red and white stripes!

And guess what, absolutely no ice cream maker required! You see, the red “stripe” is a no-churn red velvet ice cream, made simply by whipping up some heavy cream, sweetened condensed milk, cocoa powder, and a little red dye. I also stirred in some chopped white chocolate because why not? 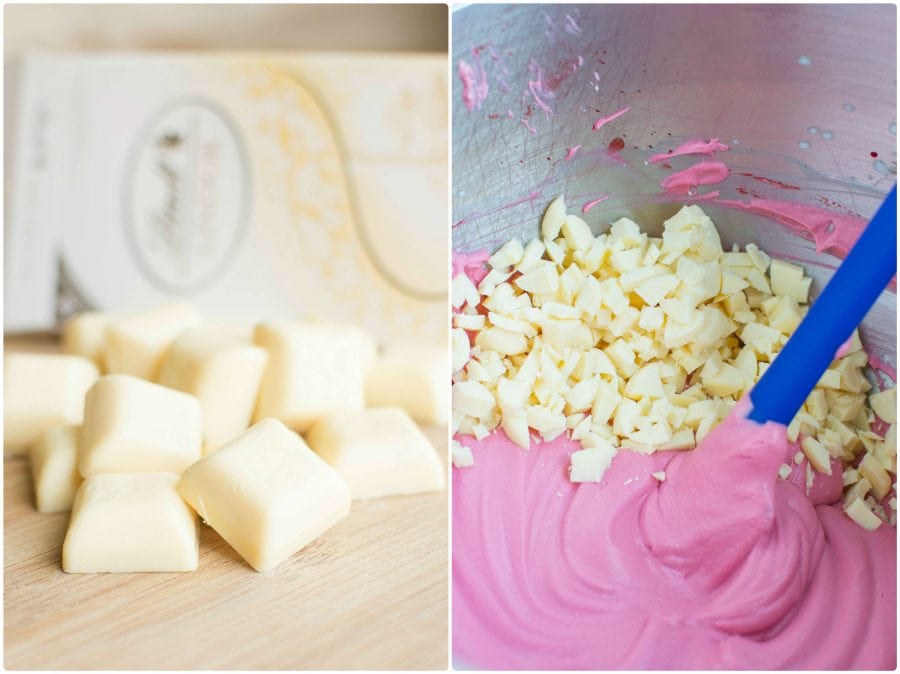 The white “stripe” is a no-churn cheesecake ice cream made with heavy cream, sweetened condensed milk, cream cheese, and vanilla.  With so few ingredients needed and how easy it is to make at home, you’ll be amazed at how creamy and fluffy this no-churn ice cream is! 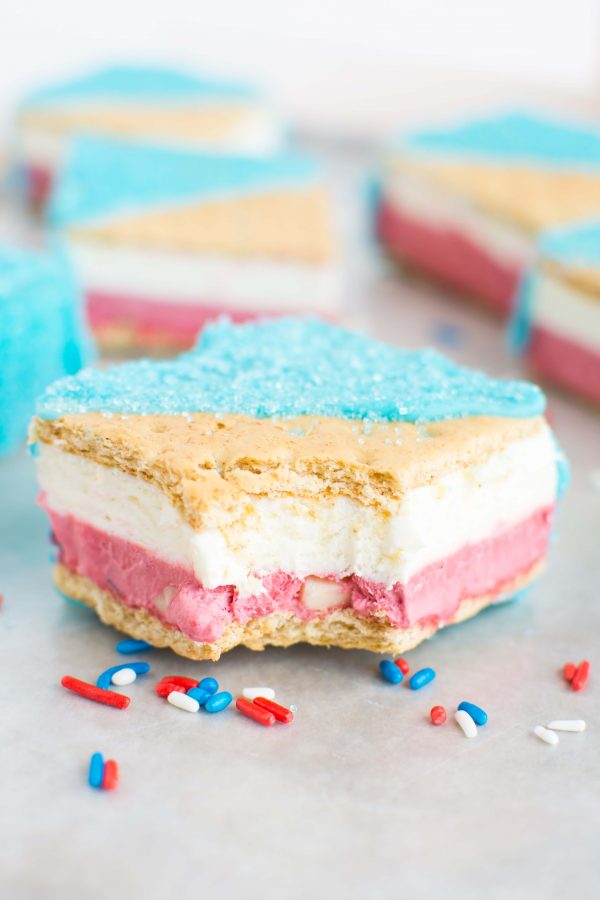 Graham crackers are usually my go-to when it comes to making ice cream sandwiches. Why? Well, I like the fact that they soften a little as they chill. The texture is just like those classic rectangular ice cream sandwiches I used to scarf down every summer. And I don’t know about you, but I’m so not about biting into a rock-hard hockey puck of an ice cream sandwich. 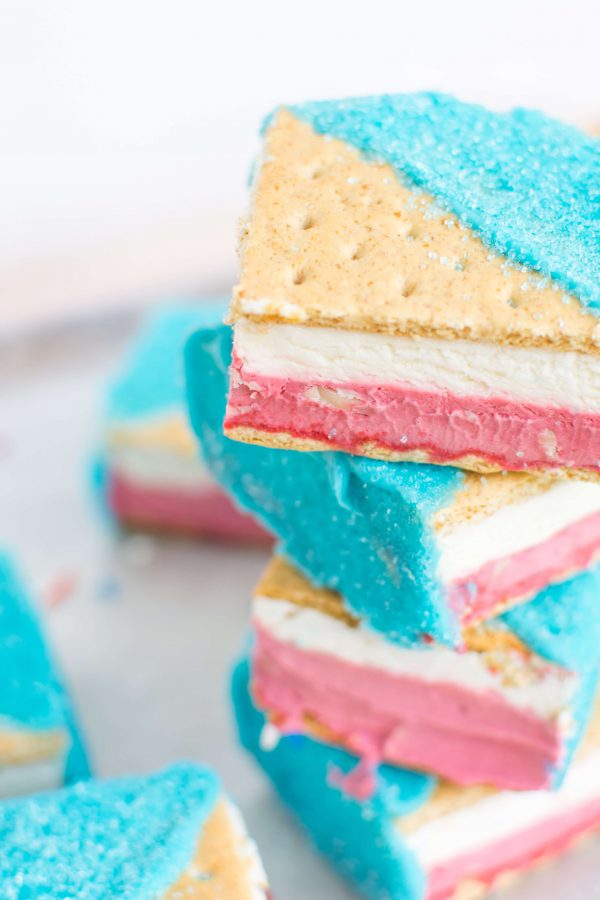 These ice cream sandwiches wouldn’t be complete (nor American) without some kind of blue, which was the perfect excuse to dip them in a silky smooth coating of blue white chocolate. Oh, and for that extra sparkle, I dipped them in some blue sanding sugar. Any sprinkles will do (stars would be perfect!), but I do love how “spark”ly the sugar crystals made them! 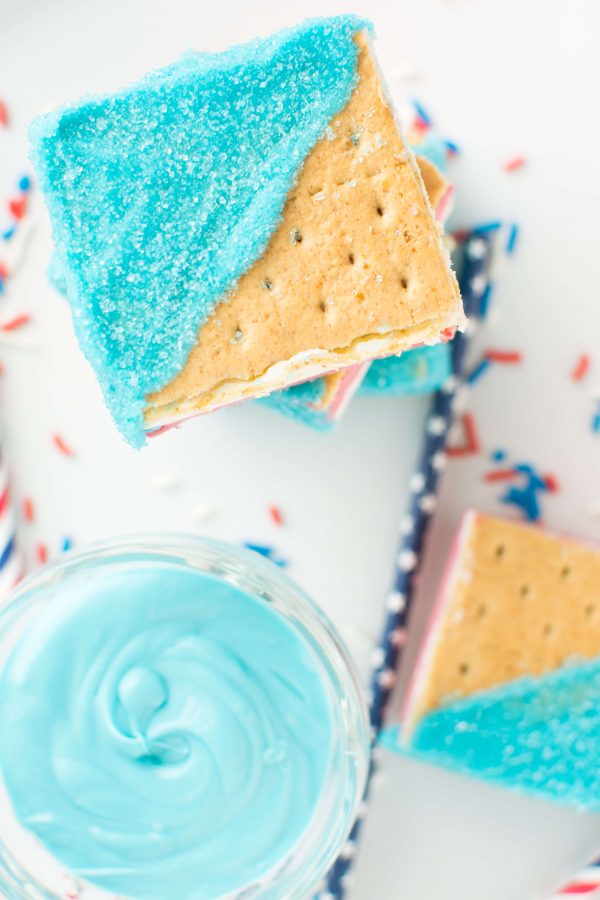 Oh, and here’s a tip! Since there’s about an inch of extra space between the edge of the pan and the ice cream sandwiches, I used a ruler along with a few candy bars (Butterfinger has the perfect thickness) as a barrier. Mind you, it doesn’t have to be a Butterfinger bar–anything will work as long as it can be in the freezer. 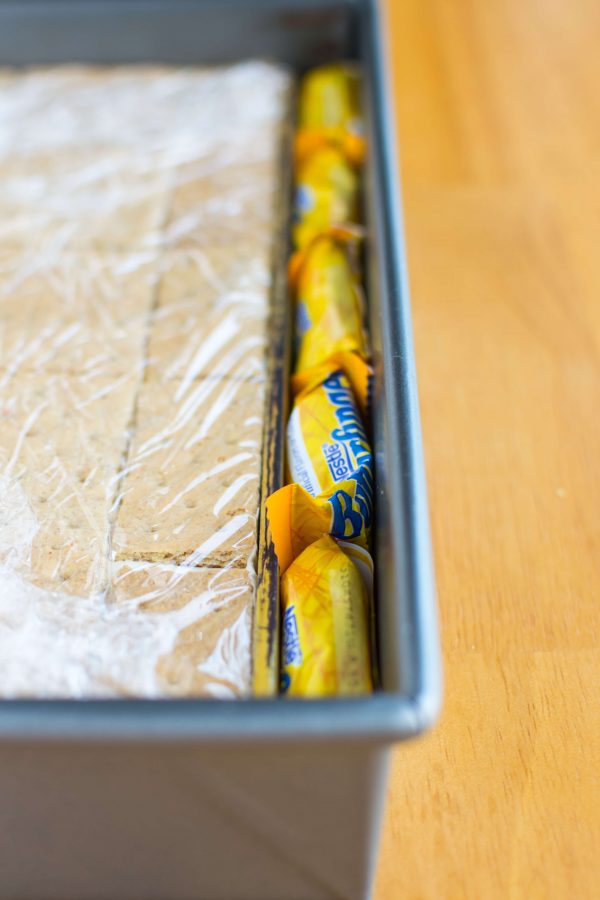 Happy (early) 4th of July to all of you!

Can Ice Cream Be Refrozen?

It is only safe to refreeze ice cream if it has slightly melted, but has been kept cold.

When ice cream has melted, bacteria can grow.

Listeria outbreaks can occur in the freezer when ice cream is melted and refrozen. 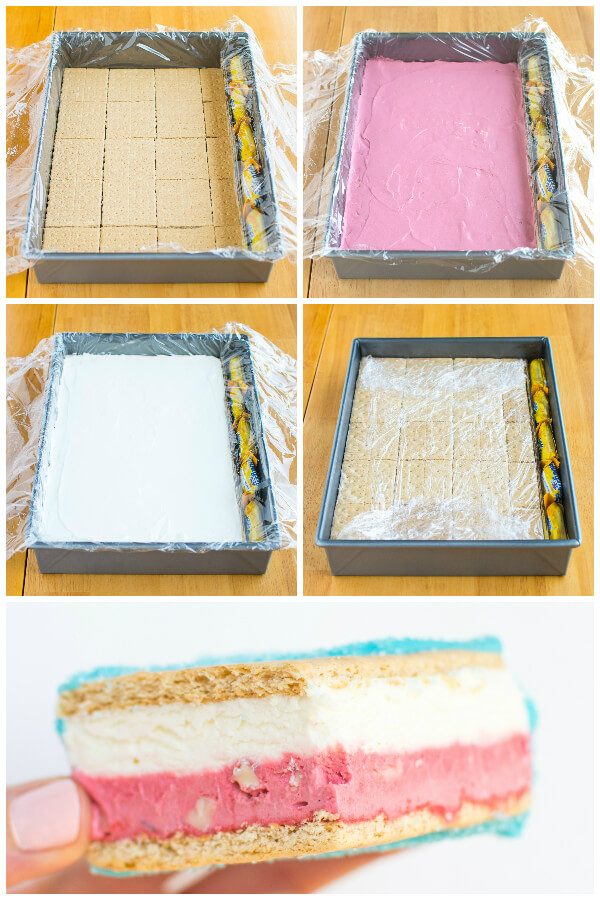 How Long Will Ice Cream Keep?

Ice Cream will keep in the freezer for 2-3 months.

What Can You Substitute For Sweetened Condensed Milk?

Cream of coconut is a good substitute for sweetened condensed milk. 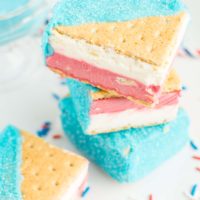 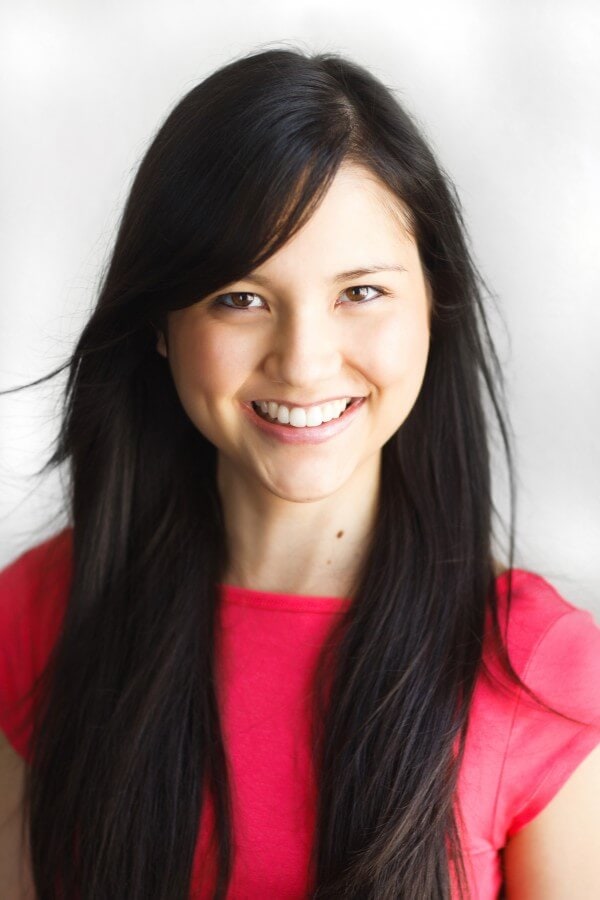 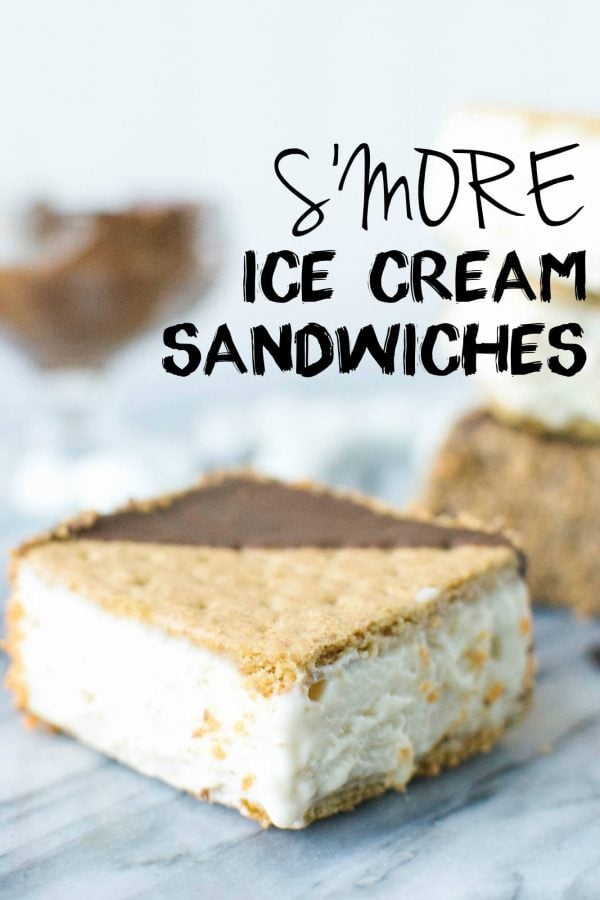 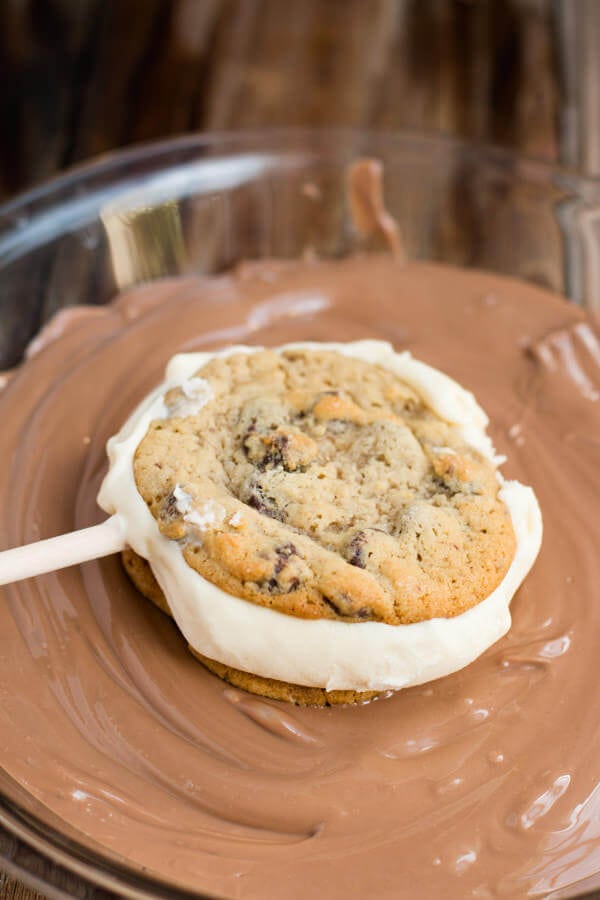 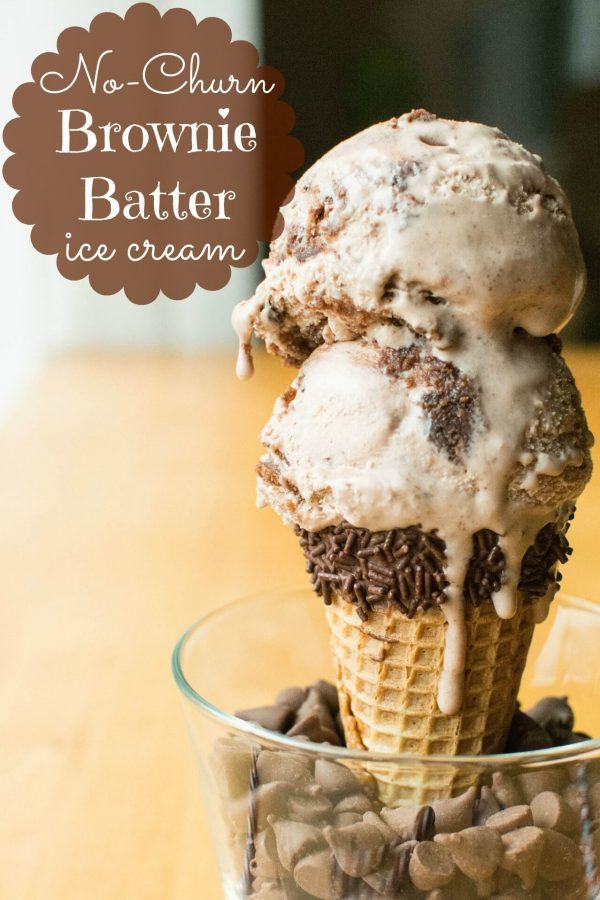 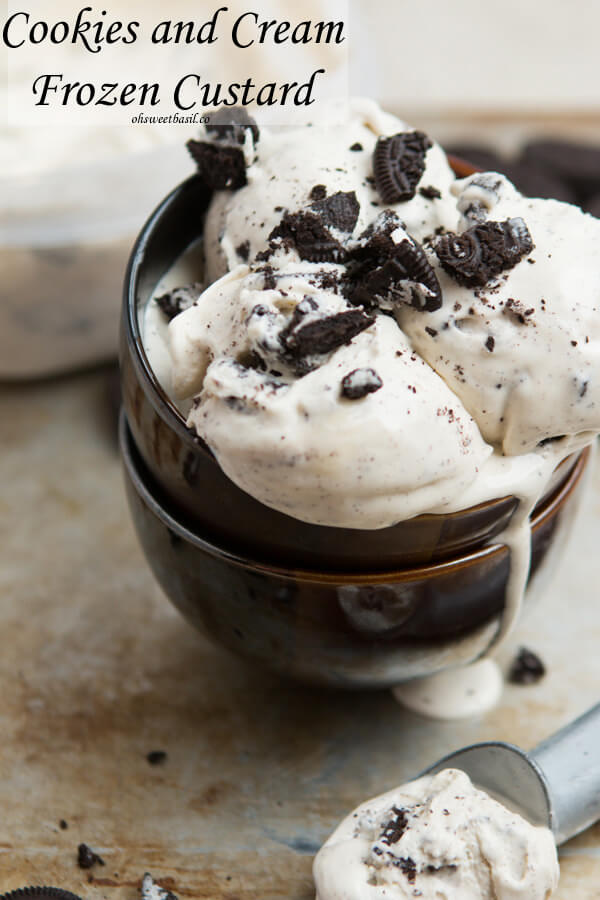