Whether it’s football game day in the fall or winter, there’s nothing better than wandering over to the food table and finding Mexican 7 layer dip. It’s the best I’ve ever had! 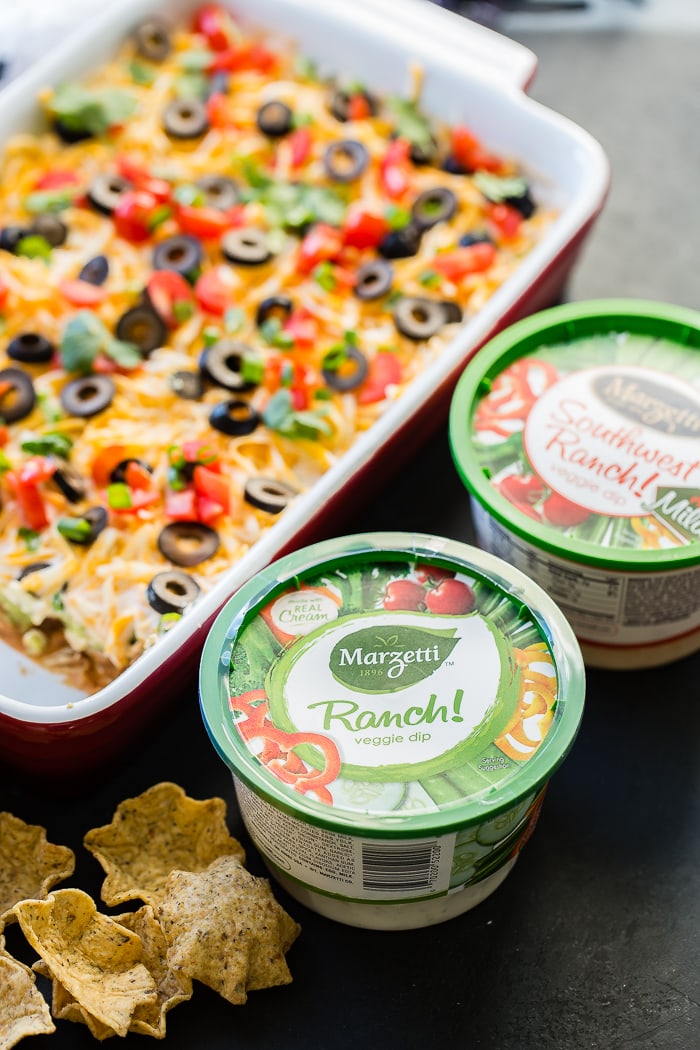 Alright, you’ve been assigned a dip or appetizer and you just don’t have time to slave over something extravagant, but you also want to show up having shown a little more effort than just a bag of pretzels. Introducing: the best 7 layer Mexican dip! That’s right, this version is better than any other.

We’ve teamed up with Marzetti to share a simple 7 layer bean dip recipe that will have your guests devouring, and even begging for more of your recipe at the next game day party with all of your favorite people.

I had my very first 7 layer dip from a friend in high school, Steffanie Leopard, who totally rocked it at a Young Women’s get together at my church. We all sat down and dug in, absolutely loving every bite. Oh to be young and not think a moment about what we are eating.

Our 7 layer taco dip takes things to a whole new level. I mean, we love the original, but I was missing some flavor and on a whim I decided that, you know what, even if this isn’t what the rest of the blogosphere is doing, if it’s the best Mexican 7 layer dip then who cares if it’s different as long as it’s awesome! 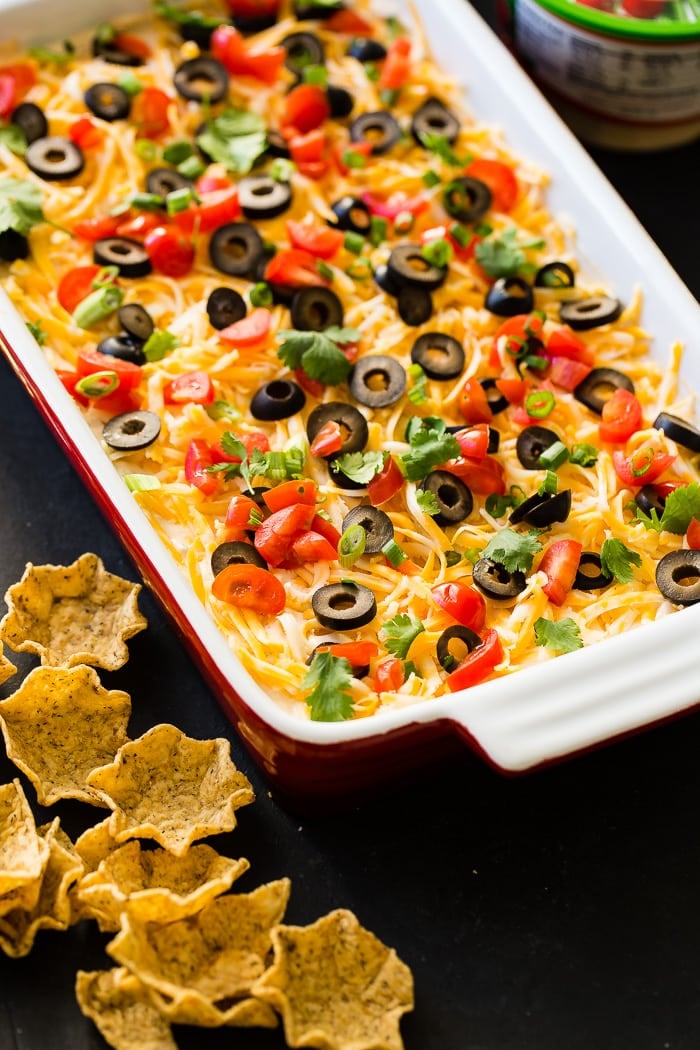 7 layer dip is basically the same everywhere, but we chose to mix things up a bit. The secret to our Mexican dip is Marzetti ranch. You can use original or Southwest Ranch, both are fantastic, so it’s up to you, but lately we’ve been busting out the Southwestern. Marzetti is thick and creamy like sour cream but sour cream can kind of just sit on your palate, while Marzetti has that texture that is meant to be dipped and enjoyed.

In addition to the Marzetti ranch, here’s what all you’ll need to make this layered taco dip recipe: 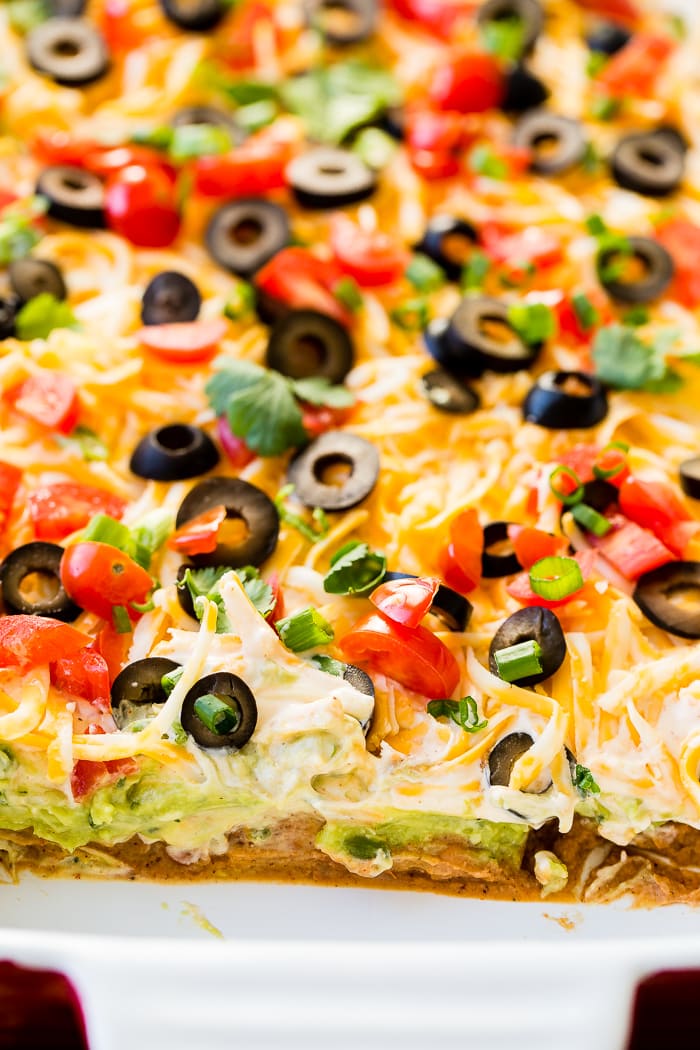 How to Make 7 Layer Dip

We like to serve our 7 layer Mexican dip with tortilla chips, but you could also scoop this dip into taco shells to make bean tacos, serve it atop nachos, and more! 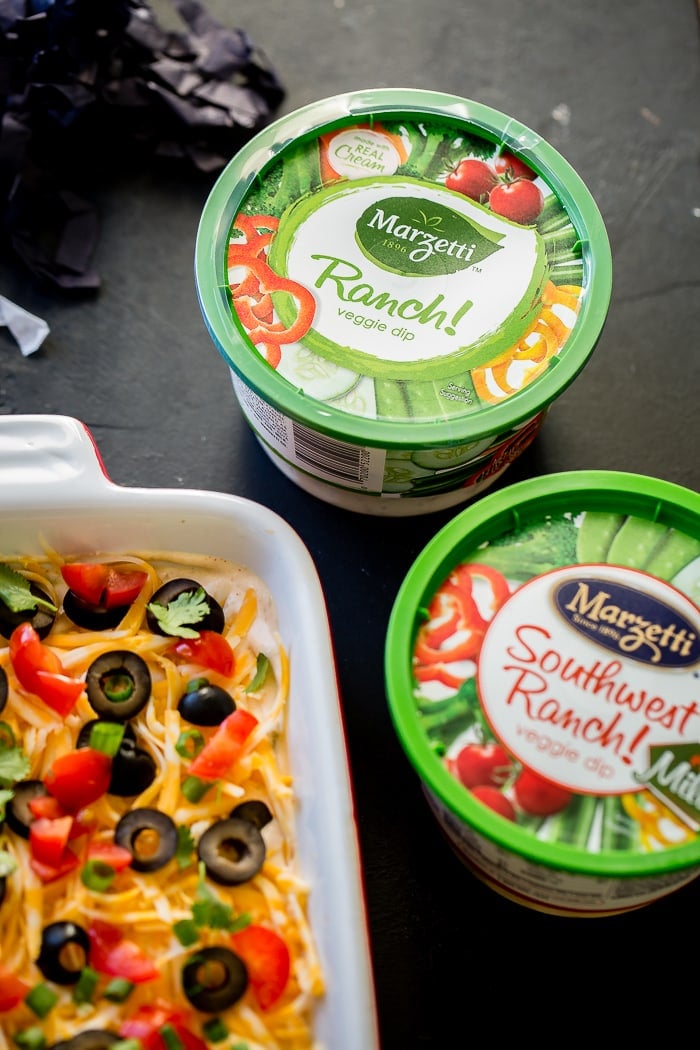 Can I Use Salsa Instead of Fresh Tomatoes?

We have been more drawn to tomatoes versus salsa lately. I feel like the salsa gets a tad watery and that can ruin the thick and creamy dip, and it definitely can make the cheese soggy quite quickly. However, salsa is awesome so you really can’t go wrong in using that instead.

Can I Prep 7 Layer Dip in Advance?

Yes, you can make this layered taco dip up to 24 hours in advance. Just note that the tomatoes will release some juices over time.

What Type of Ranch Should I Buy? 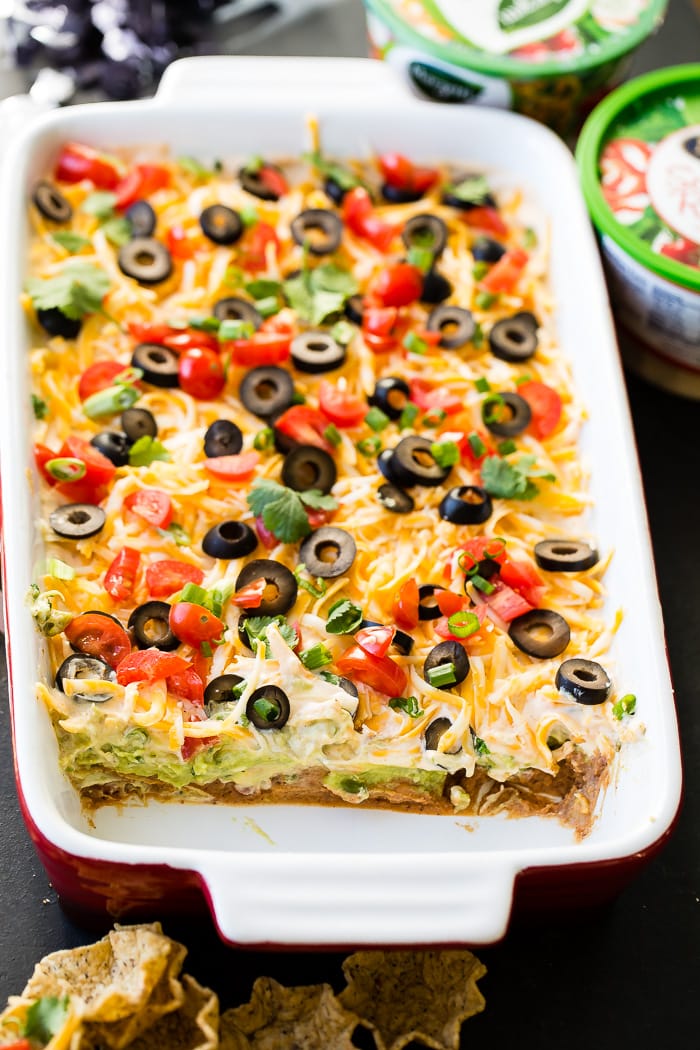 We like to use grape tomatoes because they have great flavor, and they don’t release as much water as the basic vine or roma tomatoes. But if that’s all you have on hand, you can definitely use them instead of grape tomatoes.

In general, feel free to play around with this recipe a little bit. If you don’t like olives, leave them out, or replace them with pickled jalapeños. Use your favorite shredded cheese blend, and so on.

We prefer making this 7 layer taco dip with homemade guacamole, but you’re welcome to use a store-bought kind instead if that’s easier. 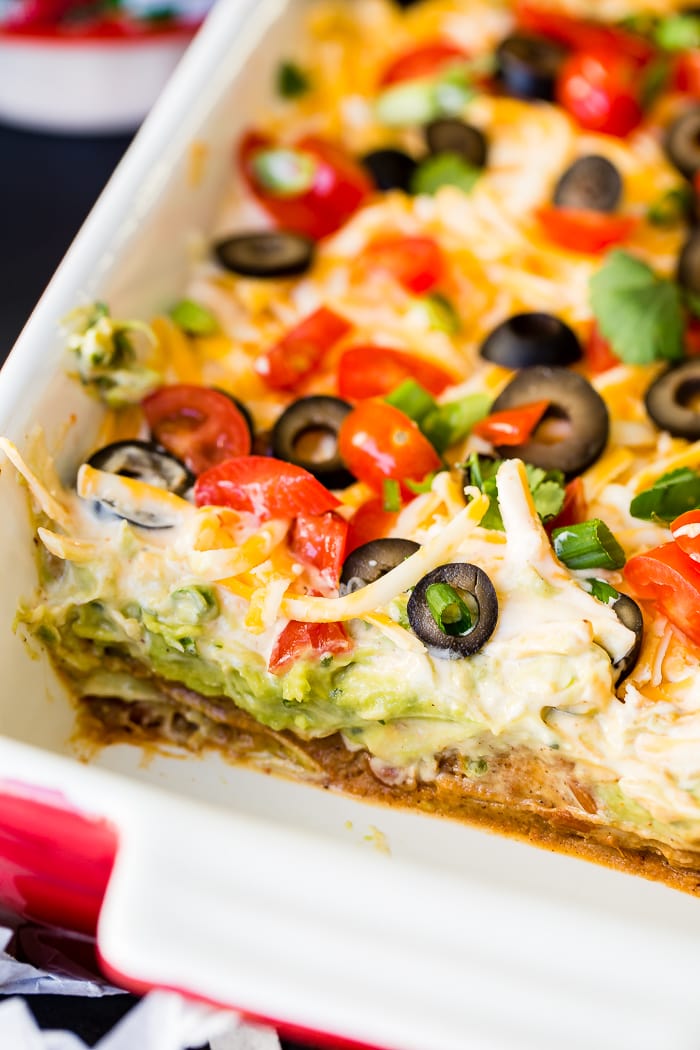 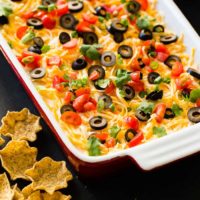 4.2 from 60 votes
Prep Time: 10 minutes
Total Time: 10 minutes
Servings: 12 servings
Save Recipe Print Recipe
Whether it's football game day in the fall or winter, there's nothing better than wandering over to the food table and finding the best Mexican 7 layer dip. It's the best I've ever had!

This is a sponsored conversation written by me on behalf of Marzetti Veggie Dips. The opinions and text are all mine.